While it's business as usual in the tube, many Brits fear their liberties are under siege, and relations with Muslims are more strained than ever. 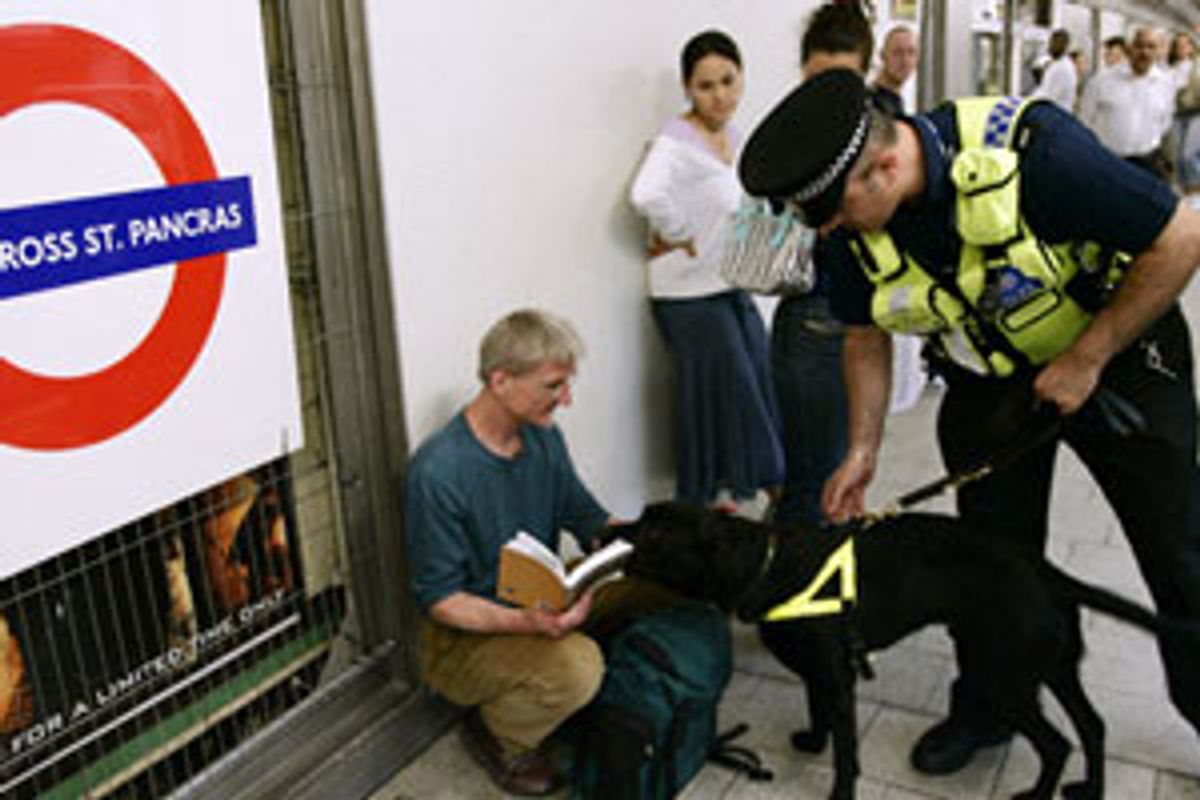 Mark Delamey's roadside fruit stall was doing a roaring trade Thursday night as commuters bustling in and out of the Russell Square tube station stopped to pick up strawberries fresh from the field. But today the stall remains shut in memory of those murdered on July 7, 2005, when four terrorists blew themselves up, one in a tube train below this station.

The terror attacks a year ago killed 56 people, including the four bombers themselves, injured more than 700 others, and brought a major city to a standstill. Even more shocking was that the four terrorists were "homegrown," Muslims born and bred in the United Kingdom who had come to see their fellow citizens as legitimate targets in a global jihad.

Fears of another attack have run high since then, amid warnings from the British government and security services. Officials say they have disrupted at least three attacks since the London bombings and have "intensified" their counterterrorist investigations. On Monday, Peter Clarke, the head of Scotland Yard's anti-terrorist branch, revealed that police are carrying out approximately 70 counterterrorism investigations.

But in some respects, the demands of daily life override fear. "We're shutting the stall out of respect, but no one's worried about another attack," said Delamey, 19. "People still use the tube." For many Londoners, the main concern is not being blown up, but whether the old, creaking trains will ever be on time.

Yet, a powerful debate has been churning about how much the devastating attack of a year ago should be allowed to transform the way of life here. Civil liberties advocates see basic rights as being under siege, relations with Muslim communities are strained, and the fear of more attacks is exacerbated against the backdrop of the unpopular Iraq war. On the eve of the first anniversary, a handful of London commuters interviewed by Salon gave voice to a crosscurrent of uncertainties.

In the immediate aftermath of the attack, Tony Blair's government drafted new anti-terror laws for the third time since the terrorist attacks of Sept. 11, 2001, in New York and Washington. The laws were deeply controversial. As well as creating a much ridiculed statute forbidding difficult-to-define speech "glorifying terrorism," the government attempted to extend the detention of terrorist suspects without charges from 14 days to 90. Politicians across the spectrum opposed the proposals, and the government was forced to back down to a 28-day detention period.

The civil rights advocacy group Liberty also fought the detention legislation. "Think of young black and Asian men returning to their communities having served the equivalent of a six-month sentence without ever being charged," said director Shami Chakrabarti. Since the London attacks, she said, there has been a rising effort to pass legislation that restricts fundamental rights and freedoms in the name of fighting terrorism. "Such restrictions do not make us safer," Chakrabarti said. "They risk giving a victory to the terrorists by undermining good community relations and cooperation with the police and security services."

"I'm not happy with the government reducing civil liberties," said commuter Martin Oliver, a 35-year-old librarian. "I think the government and security services had enough powers. I was particularly unhappy about the 90-day idea."

Such skepticism may be rooted in the way that police have exercised power to fight terrorism over the past year -- including two high-profile bungles. Just 17 days after the bombings, police shot dead a Brazilian immigrant, thinking he was a terror suspect. On June 2 this year, 250 officers raided a house in Forest Gate, in east London, and while arresting two Muslim men, shot one of them in the shoulder. Both men were later released without being charged, a pattern that has risen in tandem with the anti-terror policies. The latest figures released from the Home Office show that between September 2001 and September 2005 there were 895 arrests under anti-terrorism legislation -- and that of these, 496 people were released without being charged.

"There hasn't been another attack, so that's a success of sorts," conceded Michael Smith, a 55-year-old retired civil servant. But, he said, "I'm not impressed with the security services' efficiency, having seen the raids they do. If the police have creditable evidence, they have to follow it up. But we don't know what their evidence was, and they're not telling us."

The bombings and security crackdown have undoubtedly increased tensions with Britain's Muslim communities. Salima Malik, 38, recounted an experience in a shopping mall with her sister, who wears a headscarf. "Two middle-aged women spat at my sister behind her back," said Malik, who dresses in contemporary Western clothing. "There is definitely more of that kind of hostile attitude around these days."

A recent poll by Times of London and ITV News revealed that four out of five Muslims living in the United Kingdom felt the same as Malik. But even more shocking was that 13 percent of those polled said the London suicide bombers "should be regarded as martyrs," and 16 percent believed that "the attacks may have been wrong, but the cause was right."

"That's worrying, if the poll is true," Smith said. "I think it's only a tiny minority that feels that way, but then you don't need many people to cause trouble. Muslims who are likely to engage in those acts live in very separate communities, in their own worlds," he said, adding, "I think there's a big difference between the elders and the youngsters." The same poll showed 65 percent of British Muslims feel their communities need to do more to integrate into mainstream British society.

Over the past year the bombers' motivations have been the subject of much debate, especially in terms of Britain's involvement in the wars in Iraq and Afghanistan. Blair has consistently opposed suggestions that British foreign policy is a prime motivator of Islamic extremists, preferring instead to present jihadism as a broader anti-Western and anti-democratic ideology. Earlier this week he said: "You've got to defeat the ideas, and the completely false sense of grievance against the West."

But the bombers' own video testaments have presented their actions as fighting on behalf of their Muslim brothers elsewhere. On Wednesday, video footage was released of Shehzad Tanweer, the 22-year-old who detonated his rucksack bomb near the Aldgate tube station, killing himself and six others. In the video, he said attacks would continue "until you pull your forces out of Afghanistan and Iraq."

"I think our foreign policy has increased the likelihood of an attack," said Oliver, the librarian. "But these sort of attacks pre-date our involvement in Iraq and Afghanistan."

Smith said: "I think it's connected with the war but not totally. There are a lot of reasons and I'm not sure the government has done enough to look at the causes."

Ramy Salibah, a student, does not believe the Iraq war is necessarily to blame. "Terrorism is more than 30 years old," said the 23-year-old Lebanese Christian, who has lived in London for several months. "These groups need a big event; otherwise you wouldn't know of their existence. And London is an obvious target." Salibah's friend Aziz El Hassan, a master's degree student from Morocco, agreed. "Morocco is not a powerful country and didn't send troops to Iraq, but we have also suffered bombings," said the 34-year-old.

Although both men are obviously Arab in appearance, they said they had felt no discrimination in London.

But Salibah acknowledged the formidable problems confronting British society now. "You can't integrate people if they don't want to be integrated," he said. "People are coming to Britain and trying to reproduce their background here. Long term that won't work."

A deep sense of insecurity remains both inside and outside the Muslim communities. Oliver said he didn't know what the Muslim community itself is doing to root out extremism. "My suspicion is not enough is being done," he said. "More widespread and straightforward condemnation of terrorism would be a start. They often seem to say, 'Terrorism is wrong but...'" That caveat is what stops him. "There shouldn't be any 'buts,'" he said.