Sigh, mateys. Johnny Depp and Keira Knightley manage to sparkle, but this overstuffed sequel is no treasure. 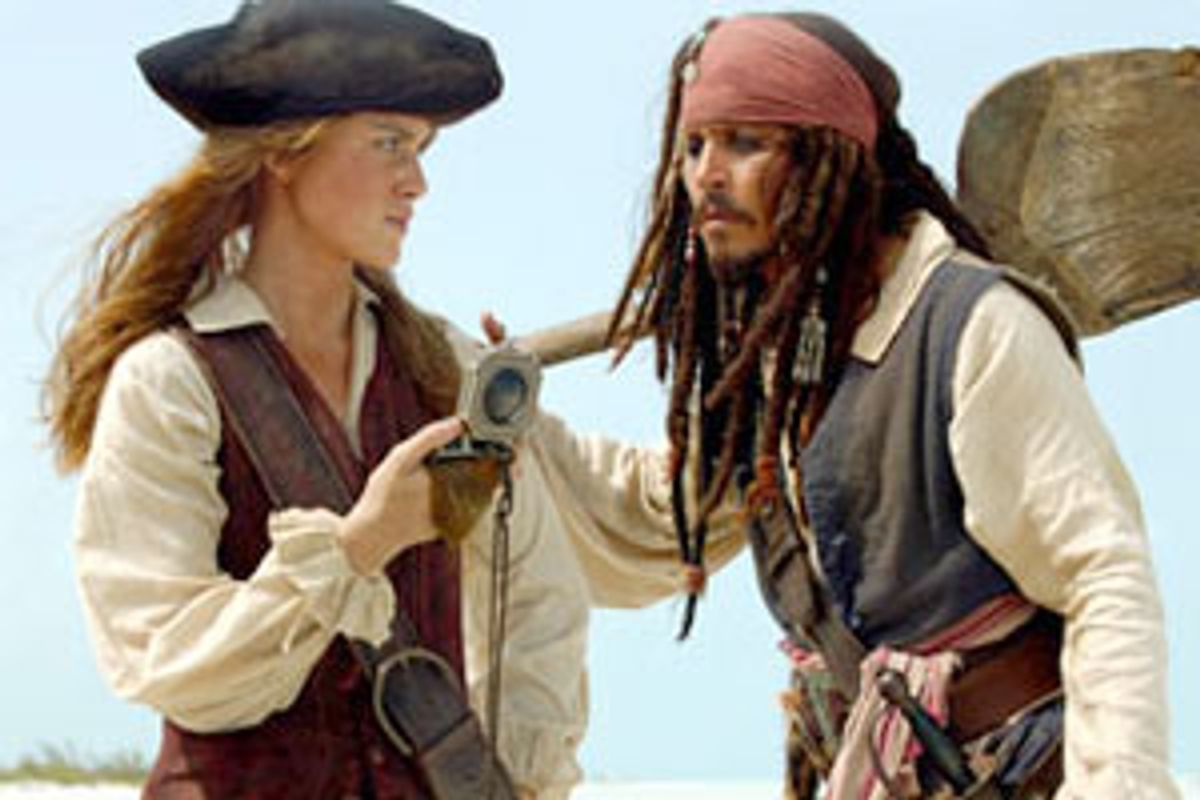 Calling a summer movie "action-packed" is supposed to be a compliment, but there's nothing so tedious as nonstop excitement. The point of pacing, and of good writing, is to give audiences hearty gulps of oxygen between thrills. Filmmakers who don't want to risk losing the audience with the "slow" stuff -- scenes in which characters actually get to talk to each other, for example -- usually just end up with a mess.

And that's not too strong a word for Gore Verbinski's overstuffed "Pirates of the Caribbean: Dead Man's Chest." There's no real plot here: just a collection of ostensibly thrilling situations strung together with tenuous bits of expository dialogue. The characters most of us were probably hoping to see in action together -- chiefly, Johnny Depp's louche-sexy pirate Jack Sparrow and Keira Knightley's feisty adventuress Elizabeth Swann -- barely pass in the night, or even during the day. And although the characters seem to be in motion nearly every minute, the picture is curiously low on swordplay and anything that might pass for swashbuckling. It rushes at us from all directions at once; it's often so busy we hardly know where to look.

Admittedly, the first picture in the franchise, the hugely successful 2003 "Pirates of the Caribbean: The Curse of the Black Pearl" was pretty excessively upholstered itself. (The third installment, still in production, is slated for release next year.) But the first picture was such good, jaunty fun -- and such a magnificent visual spectacle -- that it didn't much matter that the plot sprawled every which-way. "Dead Man's Chest," on the other hand, feels wrong from the start. Will Turner (Orlando Bloom, who's just as pretty as he was in "The Curse of the Black Pearl," even though he still hasn't managed to grow a personality) is tossed into prison just as he's about to marry his lady love, Elizabeth: Turns out that a greedy dignitary, Lord Cutler Beckett (Tom Hollander, looking fabulously foppish in an outlandish wig-and-breeches get-up), wants to use him to catch the escaped Jack Sparrow, and to retrieve the special compass that's in Jack's possession. A bunch of stuff happens: Will manages to locate Jack, who has become the unwilling guest of a cannibal tribe; Elizabeth stows away on a ship herself, disguised as a boy, hoping to find Will and Jack; and Jack discovers he has nothing to fear from living white guys like Beckett, but needs to tread carefully around dead white guys like Davy Jones (Bill Nighy), a tentacled beastie who navigates his ship, the Flying Dutchman, and his slimy, barnacle-and-cold-sore-covered crew through a tortured afterlife. Jack owes Davy a blood debt, which he's trying, piratelike, to wriggle out of.

There's no reason you couldn't make a decently enjoyable movie out of a setup like that, and with characters like those. But Verbinski and his writers, Ted Elliott and Terry Rossio (who also co-wrote the first picture), just leap desperately from lily pad to lily pad, as if fearful of risking our boredom.

Almost everything in their movie feels more like reaction than simple action. There are some wonderful visuals in "Dead Man's Chest": The cannibals (a group of war-painted, vociferously un-p.c. savages, who rush at us, for better or worse, straight out of old Hollywood) keep their prisoners in dangling holding pens made of old bones. The witch woman whom Jack consults (played by the wonderful Naomie Harris) lives in a creepy tropical lair whose decor consists largely of dangling glass bottles and pale, writhing snakes -- they drip from the ceiling like exotic chandeliers.

But we barely get a chance to drink in any of these wonders. Verbinski just wants to keep things moving, and we're razzle-dazzled to the point of being simply rattled. There are numerous places where the action doesn't feel quite real -- we can't be sure if we're watching an actual stunt (and stunts are the heart and soul of a true swashbuckler) or something so enhanced by CGI that it barely looks as if any human being could successfully pull it off. At one point during the cannibal escape, Jack pulls off a nifty pole vault, only to slip into the narrow space between two cliffs, where he dangles precariously (his pole has become a sort of horizontal monkey bar). It's a marvelous image, but you wonder how much doctoring it needed to make it look as cool as it does. And in a chaotic battle scene aboard one of the ships, Will makes his way from the top of a very tall sail to the bottom by digging his knife in and letting 'er rip, gliding down as if he were being carried by a swift, smooth gust of air. That's ostensibly an homage to one of the most beautiful stunts of all time, performed by Douglas Fairbanks in the 1926 "The Black Pirate." But in "Dead Man's Chest," the stunt whizzes by so quickly that it barely registers -- it's all just part of the visual clamor and clutter. "Dead Man's Chest" has a lavish, richly burnished surface (the cinematographer is Dariusz Wolski, who also shot "The Curse of the Black Pearl"); it never lets you forget how many clams it cost. And yet many moments, like that stunt with the sail, feel wasted, thrown away, as if they don't really matter and were considered barely worth filming.

The dialogue in "The Curse of the Black Pearl" showed some wit and verve, but Verbinski and his writers have run out of steam here. The story is pockmarked by laziness: The filmmakers reintroduce (among other characters) the charming, scruffy jailer dog from the first movie -- only in this one, they leave him to be eaten by cannibals. Couldn't they have bothered to include just one witty shot of him scampering away? They either forgot, or they just didn't care.

By the end of "Dead Man's Chest," we're not sure what Verbinski and his team did care about, other than, perhaps, box-office receipts. The actors try much harder. The character of Davy Jones is wonderfully conceived, and the ever-reliable Nighy plays him with slinky dignity: With his flowing mane of slimy tentacles, he's a little like a malevolent version of Bert Lahr's Cowardly Lion, a misfit beast in a watery jungle. And Depp is once again a marvel: He struts through the movie, in his flouncy sleeves and tattered brocades, wearing a vaguely glazed look. Is he ready for action, or ready for bed -- or both? He slurs his vowels in a kind of drowsy seduction; it's if he were getting ready to slip between pirate-booty satin sheets.

But considering sex appeal is part of the big draw of "Dead Man's Chest" -- Hollywood knows the effect Bloom and Depp have on teenage girls -- the picture is disappointingly sexless. There should be more sparks flying between Jack and Elizabeth: The movie's best moments feature the two of them together (including a funny little sequence in which Depp flippantly, or perhaps half-seriously, proposes marriage -- he pronounces it "mahr-ee-ahj"). Knightley and Depp are a fabulous pair because in some ways she's tougher -- and handsomer -- than he is. With her strong, square jaw and direct gaze, she's a pirate queen in training. No wonder Jack Sparrow doesn't know quite what to make of her. Maybe she's the best life partner a pirate could ever hope for. Then again, maybe she just wants to take over the business -- and wear the clothes, if not the pants.