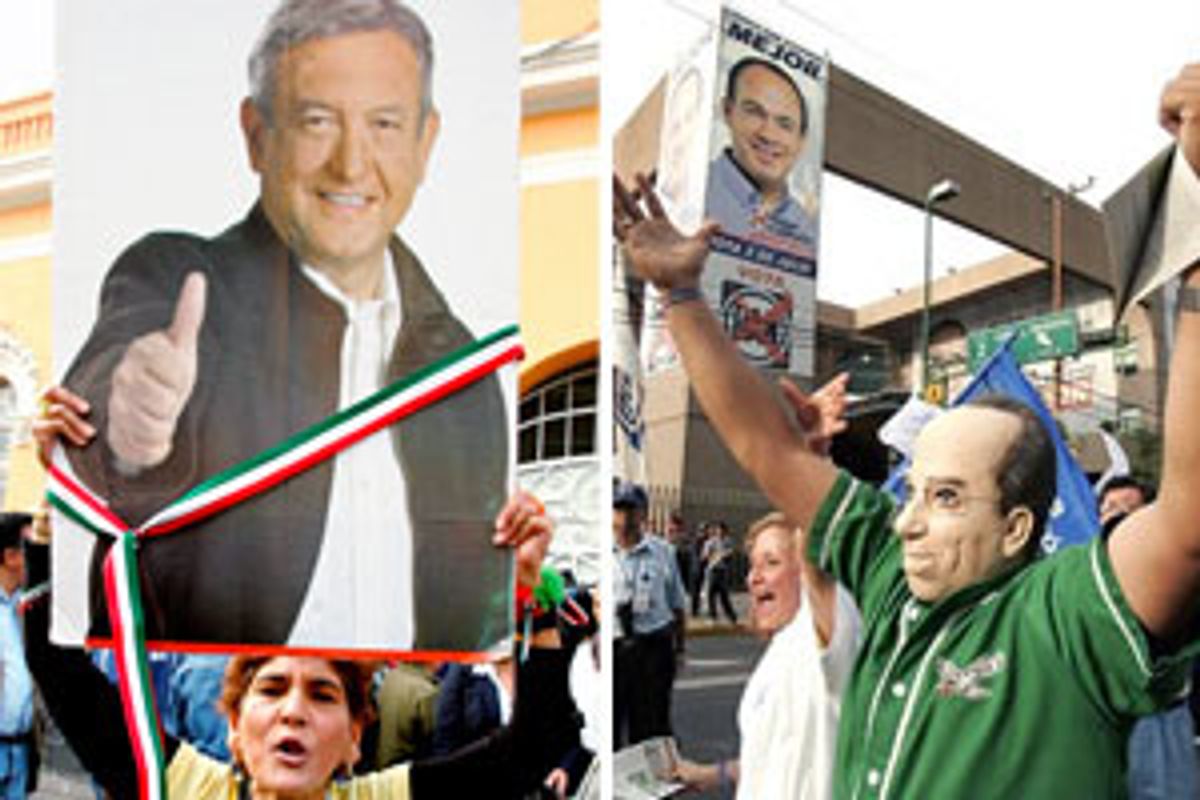 "Ciberfraude," or cyberfraud, is not a word in the average Mexican's vocabulary. But most Mexicans have heard of the extraordinary electoral debacle that befell their neighbors to the north in 2000, and Martí Batres, the head of the Democratic Revolutionary Party's Mexico City chapter, was going to capitalize on that knowledge. At a press conference Friday afternoon at PRD headquarters, the close advisor to Andres Manuel Lopez Obrador, the leftist politician who lost an exceedingly close election here this week, nodded to an aide to turn on his laptop. "And now I'm going to show you a video," he told the roomful of reporters.

The lights went out, and on a pull-down screen, computer programmer Clinton Curtis explained in English to an American audience how he had allegedly been hired by Tom Feeney, speaker of Florida's House of Representatives and a Republican, to create a computer code that fixed that state's vote in favor of George W. Bush six years ago. Batres, or someone on YouTube, had added Spanish subtitles to the 3 and a half minute clip. "This video shows that cyberfraud is possible," Batres insisted when the lights came up. "There may have been a source code used to manipulate our elections just as with the Florida elections in 2000."

Rumors of fraud were swirling in Mexico's streets, on TV and on blogs long before Thursday's official count confirmed that Felipe Calderon of the conservative PAN party had beaten Lopez Obrador of PRD by .58 percent, a difference of just 236,000 votes out of 42 million cast. "A black hand was at work, I believe," says Jorge Ortiz, a taxi driver who voted for Lopez Obrador. "The numbers just don't make sense."

Some of the rumors were reminiscent of the bad old days when the Institutional Revolutionary Party, or PRI, ran Mexico without challenge and elections were rife with fraud and ballots were burned in bonfires. There were tales of 3 million votes missing from the preliminary tally issued early in the week, which had Calderon winning by more than a million votes. There were allegations of vote buying and ballots buried in a Mexico City garbage dump.

But the fraud claims made at the PRD press conference were decidedly 21st century and very American. Batres, head of the PRD's Mexico City chapter, detailed several instances where the votes reported by the government's preliminary tabulation system, called the PREP, did not match the actual voting record, always to the deficit of Lopez Obrador and the benefit of Calderon, in one case by as many as 3,828 votes.

According to Batres, the inconsistencies cannot be chalked up to human error or deliberate destroying of paper votes, but to conspiracy, to a source code like the one Clinton Curtis claimed to have designed in Florida that systematically moved votes from the PRD to the PAN.

"In many different states around the country, we have seen what we believe to be cybernetic manipulation," Batres insisted. "We are going to enlist the help of information crime experts to look for a code inside the [electronic tabulation] system and then we need a recount, vote by vote."

Batres did not specify whether the PRD believes the entire election was manipulated or if the numbers were tweaked for only a select number of polling sites. The party will make a formal presentation to the Federal Electoral Tribunal contesting the validity of the election as soon as Saturday morning. As of Friday night, the party had not yet announced which tack it would take, but there were three likely scenarios.

1. The PRD could claim that certain polling sites were manipulated and call for the reopening of the ballot boxes at those sites for a vote-by-vote count.

2. The PRD could claim that the entire election should be annulled because cyberfraud was widespread and affected every polling site.

3. The PRD could claim that the entire election should be annulled because of cyberfraud and because of other factors.

Chief among those "other factors" is the annulment of more than 904,000 votes, 2.16 percent of all votes cast. While discussion of cyberfraud sounds as much Ohio 2004 as Florida 2000, it's annulment that really inspires a Tallahassee flashback.

Explains University of Texas political science professor Kenneth Greene, who has been in Mexico as an observer, "This election had the 'overvote' factor, similar to the butterfly ballot issue in Florida where people punched more than one option. Here people sometimes marked more than one box and so the IFE didn't know who to count it for and annulled it."

The Federal Electoral Institute, known by its acronym IFE, is controlled by appointees from Calderon's party, PAN, just as the chief vote-counter in Florida, Katharine Harris, was a member of George W. Bush's party. In fact in Mexico, the IFE has even tighter control than Harris had six years ago. "It's parallel to what happened in Palm Beach except that in Mexico only the IFE can count the votes, unlike in Florida where the lawyers and the party members got involved with counting."

Once Lopez Obrador presents his formal complaint, he may not have any better luck. The Federal Electoral Tribunal, which will review the complaint, contains no PRD affiliates.

PRD officials are unlikely, therefore, to persuade anyone in power of their arguments. They seem confident, however, that they can convince the public that something untoward happened in this election. Expert observers are skeptical.

Victor Manuel Alarcón, head of the sociology department at the Metropolitan Autonomous University-Iztapalapa, says the errors were likely human, a common occurrence with any non-digital voting system. "A lot of the people tallying the votes were poorly educated -- remember this country is poor -- so it's very possible the discrepancies between the PREP and the official count were their fault, not the result of fraud."

Despite a history of vote fraud, it's also difficult to reconcile the claims of manipulation with Mexico's revamped electoral institutions and voting procedures. While Mexico's electoral system has remained technologically simple, with voters using fat black crayons and paper instead of touch screens, it is also one of the most expensive and labor-intensive in the world. The government spent $1.2 billion this year in part to ensure that no polling site would have more than 300 voters assigned to it. In the 1990s, procedures were changed so that no party officials would work at polling sites. Parties are allowed to have representatives observing the procedures, but the sites themselves must be manned by ordinary citizens to create accountability.

According to Ulises Beltran, a professor of political science at CIDE, a leading graduate research institution in Mexico City, organized fraud is virtually impossible in contemporary Mexican elections because of all the safeguards. "To find enough evidence of fraud for Lopez Obrador to win," explains Beltran, "there would have to be 50,000 citizens involved with the conspiracy. The small size of our polling sites and the large number of citizens working in them should really prevent it."

Still, no matter how plausible or implausible the PRD's case turns out to be -- and enlisting the questionable Clinton Curtis on their behalf is hardly convincing -- 65 percent of the public voted for someone besides the election's declared winner. Some, at least, are likely to remain dubious about Calderon's victory. Cuahtemoc Cardenas, the founder of the PRD, who could make a much more compelling case that he was robbed of the presidency in the controversial election of 1988, argues that all questions must be answered for the sake of Mexico. "Without even being at fault," wrote Cardenas in a Friday editorial, "those who resist and oppose the clearing up of doubts awake unnecessary suspicions."

Eliza Barclay is a freelance reporter based in Mexico City.