The state secrets that weren't secret

Right-wingers desperate to intimidate the press have accused the New York Times of treason for publishing details of a terror investigation -- ignoring the fact that everything significant about that operation has been known for years. 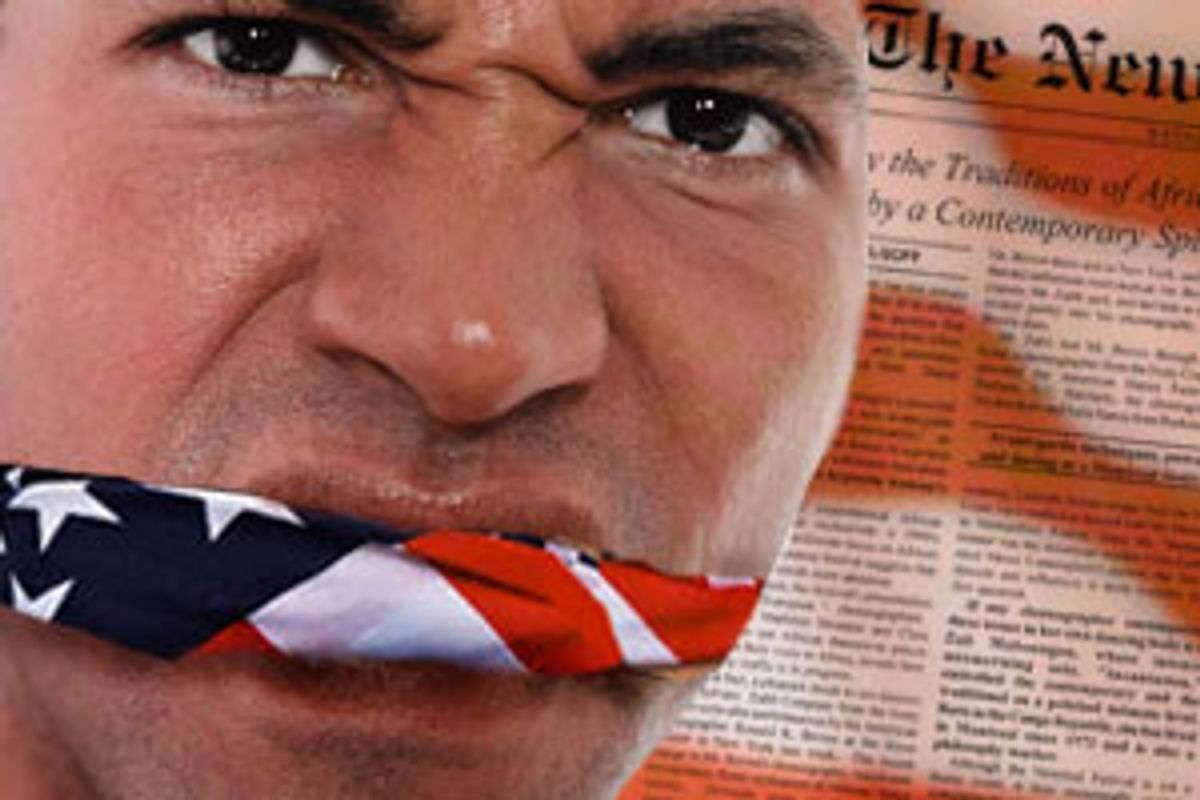 Losing the national debate over the war in Iraq while falling to unprecedented lows in public approval, the Republican right is returning to a favorite smear tactic: charging the loyal opposition with "treason." For now the New York Times is the most prominent target of these charges, having published an article on the Bush administration's investigation of terrorist money laundering using SWIFT, an international banking correspondence system. But the current campaign against the paper of record is merely rehearsal for a barrage of accusations against Democrats as the November midterm approaches.

In recent days, the buzzing swarm of right-wing drones has spread the treason meme, from the House Republican caucus to Fox News Channel, MSNBC, talk radio and the Internet. The ubiquitous Ann Coulter compared Times publisher Arthur Sulzberger to Tokyo Rose, while a California radio host named Melanie Morgan, who also operates a Republican-funded Web site, convicted Times executive editor Bill Keller of capital treason and urged his execution by gas chamber. A Wall Street Journal editorial suggested that (unlike the Journal news editors who also had published the SWIFT story) the Times is guilty of intentionally "obstructing" the war on terror. Weekly Standard editor William Kristol demanded on Fox News that the Justice Department prosecute the Times under the Espionage Act. (If Kristol and his ilk really believe that the Times is a nest of traitors, shouldn't they call for their patriotic friend David Brooks to resign from the paper's Op-Ed page?)

And professional propagandist David Horowitz, who has been shrieking for years about the liberal "fifth column," declared "war" on the Times as well as all liberals, Democrats and leftists. Just to prove that he is still crazy after all these years, Horowitz endorsed the publication of the home addresses and telephone numbers of the newspaper's personnel.

As with so many ugly accusations promoted by the likes of Coulter, Kristol and the Journal editorialists over the past decade, this furor is just another political hoax. Their professed outrage is a fraud, meant to intimidate mainstream journalists who have begun, at long last, to examine the misconduct of the Bush administration and the Republican congressional majority.

Ever since the appearance of the Times report on the SWIFT consortium's cooperation with US counter-terror agencies, right-wing commentators have been screaming about the alleged damage done to our national security interests. The president has joined this angry chorus, but neither he nor anyone else has mentioned anything specific -- almost certainly because there was no damage.

The SWIFT system is an international banking cooperative, based in Belgium and overseen by the central bankers of the 10 largest industrial countries. Ever since 9/11, the governors of those banks and the SWIFT directors, along with nearly every financial institution in the developed world, have publicly committed their resources to prevent, trace and report money laundering by suspected terror organizations.

On June 23, the SWIFT chairman, deputy chairman and CEO reiterated that policy in a public statement posted on the cooperative's Web site. "As you may know from the User Handbook and swift.com," said the statement, which was addressed to the cooperative members, "SWIFT has a longstanding history, beginning in the 1990s, of cooperating with authorities such as central banks, treasury departments, law enforcement agencies and international organisations such as the Financial Action Task Force (FATF) in their efforts to prevent misuse of the financial system. Our members support this policy." Indeed the SWIFT Web site has long featured a page explaining its policy of cooperation with international efforts to frustrate money laundering and terrorism.

American intelligence and law enforcement access to SWIFT's database was not secret in any meaningful sense, having been disclosed more than three years ago. In a report dated December 2002, a special U.N. Monitoring Group, created by the Security Council to combat terrorism after 9/11, mentioned the importance of SWIFT and other international financial organizations. Among the experts who signed that report was Victor Comras, a former State Department official. Still available in PDF form at the U.N. Web site here, the report noted in Paragraph 31:

"The settlement of international transactions is usually handled through correspondent banking relationships or large-value message and payment systems, such as the SWIFT, Fedwire or CHIPS systems in the United States of America. Such international clearance centres are critical to processing international banking transactions and are rich with payment information. The United States has begun to apply new monitoring techniques to spot and verify suspicious transactions. The Group recommends the adoption of similar mechanisms by other countries."

Anyone who bothered to read the U.N. report on international counter-terror efforts knew that American officials were using SWIFT data. Anyone who consulted the SWIFT Web site knew that the organization's official position, overseen by the Group of Ten central bankers, was to provide complete cooperation against terror and money laundering.

Although self-styled experts such as Coulter, Horowitz and Kristol may not have been aware of the SWIFT system or its role in the war against al-Qaida, the same cannot be said of the actual terrorists. According to U.S. officials responsible for tracking terrorist financing, the enemy has become increasingly wary of normal banking channels over the past few years because they know those institutions are likely to report suspicious customers or transactions.

In September 2004, a pair of House subcommittees held a joint hearing on "combating international terrorist financing," co-chaired by Rep. Peter King, R-N.Y., the loudmouthed politician who has lately accused the Times of "treason." At that hearing Juan Zarate, the Treasury Department's assistant secretary on terrorist financing, and E. Anthony Wayne, the State Department's assistant secretary for economic affairs, both testified that the terror financiers had largely been driven out of the international banking system, and were using suitcases of cash and the traditional Muslim money exchange known as "hawala" instead.

Wayne testified that "we have made it more difficult for terrorists to use the financial system. But as we have made it more difficult for them to use that banking system, they have been shifting to other, less reliable and more cumbersome methods, such as cash couriers. Now, this means that we need to adapt, too, and we have been adapting and shifting our priorities, both nationally and internationally, as they start using more cash couriers, as they look at these alternative remittance systems known in the Middle East as hawalas; as they look to use NGOs and charities more effectively."

While cautioning that "all means are still being used to raise funds" by the al-Qaida network, Zarate agreed that "it is certainly much harder and much riskier, and I think we are a victim of our own success in the sense that terrorists are now using couriers instead of banks to move money around the world."

In short, the participation of SWIFT in American counter-terror systems was revealed more than three years ago, and the terrorists began to shift their transactions from banks to couriers at least two years ago. To the extent that SWIFT continues to provide useful information, incidentally, it is obliged to do so by law. As the Times reported, its data has been subpoenaed by U.S. officials, who can continue to rely on that method as well as SWIFT's stated commitment to cooperate.

So how did the Times report damage American security interests? It didn't.

But Horowitz and his comrades in the right-wing vanguard never allow their zeal to be confounded by simple facts. Angry and alerted to the threat, they quickly added an additional count to their indictment of the supposedly disloyal newspaper. There are traitors in the travel section, too. In his blog, Horowitz cited a June 30 Escapes feature that included "huge color photos of the vacation residences of Vice President Dick Cheney and Donald Rumsfeld, identifying the small Maryland town where they live, showing the front driveway and in Rumsfeld's case actually pointing out the hidden security camera in case any hostile intruders should get careless" as further evidence of the paper's perfidy. He identified the article's purpose as "apparent retaliation for criticism of [the Times'] disclosure of classified intelligence to America's enemies."

The seemingly innocent travel feature provoked volcanic rage in the right-wing blogosphere. After linking to the story, Horowitz raved on: "Make no mistake about it, there is a war going on in this country. The aggressors in this war are Democrats, liberals and leftists who began a scorched earth campaign against President Bush before the initiation of hostilities in Iraq." He continued in this vein, citing various examples of dissent against the Bush administration and the war in Iraq as proof of liberal Democratic disloyalty.

Never mind, as Glenn Greenwald pointed out, that Rumsfeld had granted an official request from the Times to photograph his summer house. Never mind that Newsmax, the right-wing Web site that is financed, like Horowitz's operation, by the Scaife foundations, had published an article on the Rumsfeld and Cheney residences in that Maryland resort community. (And never mind that Horowitz knows nothing about how daily newspapers work, let alone terrorists or banks; such feature spreads are assigned and illustrated weeks in advance.) Never mind that Horowitz's link to a Frontpage contributor who published the address of Sulzberger's home could result in actual violence.

In a calmer political environment, an obviously deranged individual like Horowitz could be dismissed as comic relief. But with substantial resources and friends in the White House, including Karl Rove and the president, he is more than a mere crank. He is long overdue for exposure and repudiation by the mainstream media, whose attention he so plainly craves.

If the Times or any other newspaper were to examine Horowitz's "treason" campaign, perhaps the first place to look would be at this remarkable confession of his own central role in publishing American national security secrets in a magazine he edited three decades ago. As blogger Scoobie Davis once observed, the former radical leftist did exactly what he now accuses others of doing -- and admitted that he hoped to damage American security. Is there a statute of limitations on his offense?