In this place where the bizarre is banal and nothing is quite what it seems, it's no surprise that the literature will blow your mind. 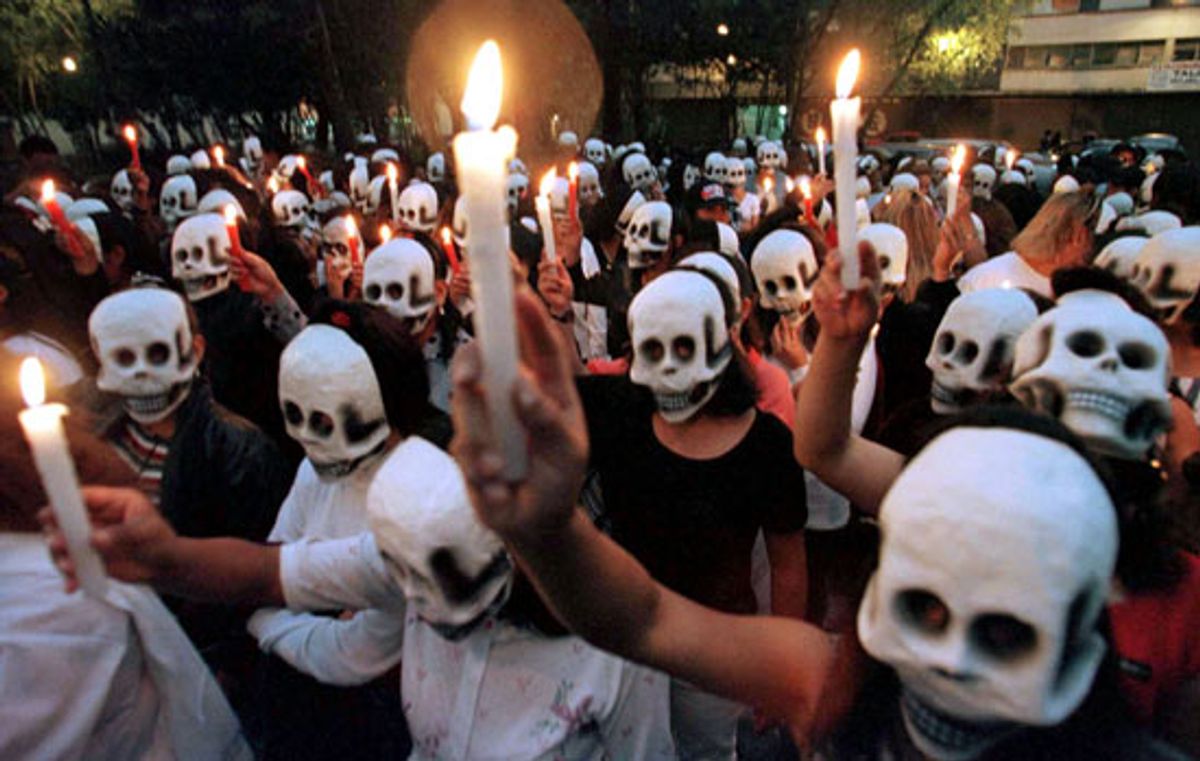 In front of tourists, Mexicans become consummate actors. They'll say just about anything to enchant you, to make you lose your mind. This, after all, is a country where the bizarre becomes routine. Not surprisingly, foreigners return again and again as if hypnotized. Their account of life en el México profundo is as captivating as it is untrustworthy.

Of course, tourists in Mexico are performers, too. Take André Breton, the founder of surrealism and author of "Anthology of Black Humor" (1938), who traveled from France to Mexico in 1938 hoping to meet Leon Trostky. What he found was an archaic, millenarian, pre-modern country that, as he wrote, "delivers its message in the language of dreams"; a place where even the darkest aspects of life -- including death -- are approached by all with humor. And there's Sergei Eisenstein, the Russian filmmaker, who struggled to complete his documentary "Que Viva Mexico!" with money from Upton Sinclair while Joseph Stalin struggled to make his life impossible. The most absurd, even impossible logic, Eisenstein believed, finds in Mexico its most comfortable home.

Then there's Ambrose Bierce, who looked death in the eye during the American Civil War and left us with his astonishing "Devil's Dictionary" (1906). He later crossed the border in 1913 while looking for Pancho Villa -- and was never to be seen again. He was seeking, as he put it, "the good, kind darkness." Likewise with the poets of the Beat Generation: Allen Ginsberg experimented with drugs as he visited ancient ruins here while William S. Burroughs accidentally killed his common-law wife, Joan Vollmer, while playing a shooting game. Inspired by Aldous Huxley's mescaline-induced chronicle "The Doors of Perception," Jack Kerouac, Gregory Corso and other beatniks -- not to mention the hordes of hippies that followed them -- became mad, got stoned and sought nirvana (a word whose meaning, by the way, is "extinction") all in Mexico.

If you're looking for travelogues, memoirs and fiction about Mexico to take not only with a grain of salt but also with a few drops of Tabasco sauce, I recommend starting with the ultimate con artist of the New Age generation: Carlos Castaneda. "The Teachings of Don Juan: A Yaqui Way of Knowledge," published in 1968, is the chronicle of a series of encounters with a Yaqui shaman, Don Juan Matus, whom the author claims to have met in 1960, during a trip to Nogales, Ariz., at a Greyhound bus station. A critique of rationalism, Don Juan's wisdom is showcased as a road map of Mexico's "mystical" side. It should be read with a skeptic's eye, though; Don Juan's statements are a hodgepodge of ancient wisdom and McSpirituality.

Graham Greene's novel "The Power and the Glory," originally published in 1940 under the title "The Labyrinthine Ways," is a tour de force about the elusive separation -- or shall we say promiscuous relationship? -- of church and state in Mexico. Set in the '30s in the southern region of Chiapas, home today of Subcomandante Marcos and his Zapatistas, it tells the story of a drunken priest at the time of intense anti-Catholic sentiment in the country. Greene was a "failed" Catholic himself who contemplated and then abandoned the idea of a life in the priesthood, and his book is an invaluable snapshot of a little-known historical moment in Mexican history. Another worthy novel about alcohol and the Brits in Mexico is Malcolm Lowry's "Under the Volcano," set in the city of Cuernavaca, the capital of the state of Morelos, during the Day of the Dead celebrations. Reading it is like descending to a previously unknown tropical chamber in Dante's Inferno. Published in 1947, Lowry's book is injected with hallucinatory descriptions in which the effect of alcohol intertwines with dream visions of Nazism in the Americas.

Equally arresting, if less frantic, is Italo Calvino's "Under the Jaguar Sun." (First published as a story in the New Yorker in 1983, it is the first of three stories in the book of the same title.) The story is organized around the five senses, and follows a husband and wife discovering Mexico through its sensual cuisine. In Mexico, Calvino suggests, food and religion are intimately linked. The plethora of tastes available pushed the tourists into a state of ecstasy as they visit ruins. The clash between pre-Columbian and European ways, still raw since the conquest, is revisited with startling effects. There's also D.H. Lawrence's "The Plumed Serpent" (1926), the self-aggrandizing tale of a self-flagellating European woman set against the backdrop of self-effacing Aztec rituals. It's the ideal travel companion for readers who see the world as a never-ending battle between the forces of good and evil.

Katherine Anne Porter, known for having a persona larger than the person who hosted it, spent years in Mexico, working as a translator, screenwriter, lecturer and reporter. Her 1930 book "Flowering Judas and Other Stories" includes excellent tales about Mexican peasant life that ought to be read alongside more idiosyncratic -- and nativistic -- portraits such as Juan Rulfo's 1968 classic "The Burning Plain," a collection of stories told from the peasant viewpoint. His characters don't just suffer their misery, they act it out for us with bravado.

Finally, no literary tour should ignore Harriet Doerr's debut novel, "Stones for Ibarra," for which she won the National Book Award in 1984 at the age of 73. The book focuses on an aging Anglo couple who move to a Mexican mining town, hoping to return to a copper mine the husband's family once owned. But he soon falls sick, and the wife's odyssey ultimately revolves around her interaction with the villagers. She learns that Ibarrans go about "their individual dooms" with resignation, recognizing "as inevitable the hail on the ripe corn, the vultures at the heart of the starved cow, the stillborn child." Doerr said of her work: "I found I'm quite happy working on a sentence for an hour or more, searching for the right phrase, the right word. I compare it to the work of a stone cutter -- chipping away at the raw material until it's just right, or as right as you can get it." The narrative makes you believe she's patiently sculpting each of the town's dwellers, their wrinkled faces, their longing souls, in stone.

For those ready to unearth Mexico's treasures from within, I recommend Octavio Paz's "The Labyrinth of Solitude," a 1950 study that will help, even today, elucidate the ways people in Mexico live. In his essays, Paz proves the extent to which the whole civilization approaches life as a cosmic performance. His prose is cosmopolitan, and he makes insightful connections between psychology and faith, literature and technology. Sadly, his iconoclastic poetry is less enticing. In its stead, I suggest un paseo, a rendezvous through one of the most lucid and emblematic of all Mexican poets, the 17th century nun, Sor Juana Inés de la Cruz. Her superb book "Poems, Protest, and a Dream" covers the treacherous path women walk in a society ruled by machismo. Finally, people interested in Mexico's tumultuous past may want to look at Mariano Azuela's "The Underdogs" (1915), a short novel about how the Mexican revolution of 1910 ended up betraying its own objectives. It follows the paths of a series of characters in search of a mission and explains how political corruption became the law of the land.

Perhaps before you travel to Mexico you'll doubt the veracity of most of these books. You might even find them mystifying. But I doubt you'll have the same feeling when you're there. Everything in Mexico es un show, the logical and the nonsensical. And before you know it, you will become part of the cast.