Riding the train in Bombay

A New Yorker explains why he loves riding the rails in the Indian city, and why they're so vulnerable to attack. 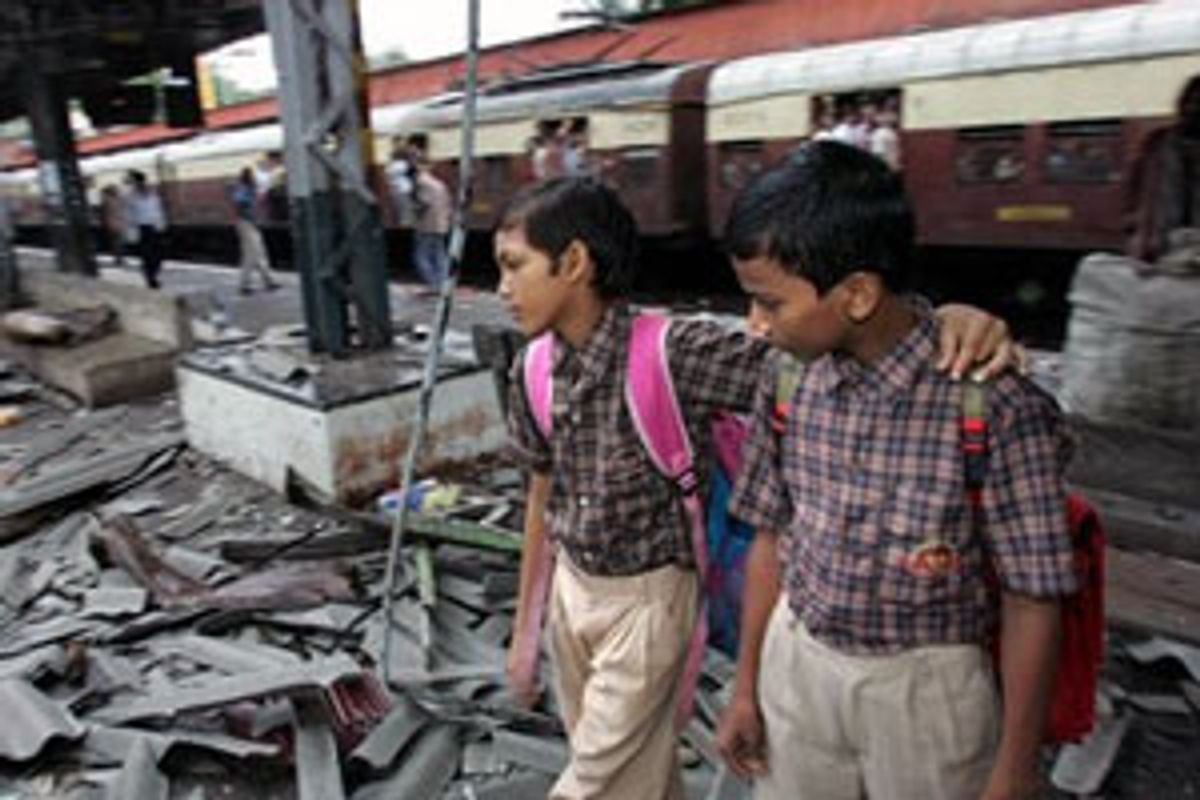 As a New Yorker in Bombay, or Mumbai, as it's officially known, one of my greatest thrills has been taking the fast train downtown.

I clamber into a wide, sturdy train carriage without doors, sealed windows or comfort of any kind. The carriage, done up in stamped steel, has the Spartan appeal of a military jeep. I lean out of the open doorway watching the city slip past, skimming my shoes over the tops of the low fences that separate the downtown and uptown tracks, marveling at the perfectly manicured trackside landscaping. For maximum stylishness, I hop off while the train is still easing into the station, turning sideways to avoid the herd of office workers thundering aboard to grab a seat.

Riding Bombay's local trains is much more interactive than taking the L line to the Bedford stop in Brooklyn, N.Y. The lack of doors and window glass, which often leaves riders soaked during monsoon season, is partly because of the tropical heat, partly to let Bombay's 6 million daily commuters jam onboard at maximum speed. The city's above-ground system handles a third more riders each day than the New York subway, where a rush hour crowd means brushing against other riders; in Bombay, rush hour means your chest is crushed, your arms are pinned and you become intimate with your neighbor's deodorant or lack thereof. You must plan your sweaty escape two stations before your stop arrives and advertise it loudly as you're fighting your way off so as not to be swept back into the carriage by new passengers. It's easier to get on and off, however, if you're riding on the outside of the train, clinging by your fingers to the empty windowsills, as many rush hour riders do.

Despite the volume, trains run as fast as in Manhattan. Taking an express train will get you where you're going three times faster than a taxi during rush hour for only 13 cents. Trains pause only a few seconds at each station. In order to handle this ridership and speed, Bombay's stations are left completely open. You can stroll onto a train from any of a number of uncontrolled entrances or even hop onboard from the tracks while the train gathers speed. There are no turnstiles. Instead, railway police conduct random, and very rare, ticket checks on the platforms. This honor system works, sort of -- the lines to buy the little cardboard tickets are long, if suspiciously middle class.

I always clutch my bag a little tighter when I hurry past the bag-check tables at Manhattan's Union Square subway station, convinced that no matter what the cops may say about the randomness of searches, suspicion falls heaviest on those who look Arab, Muslim or South Asian, as I do. But while I have been asked for a train ticket in Bombay, I've never been searched by the police in New York. My turbaned Sikh friends, however, draw plenty of attention from police and street hecklers alike, perhaps because they're thought to be Muslim, though their religion has little to do with Islam.

In Bombay, ethnic profiling of potential terrorists is a nonstarter. The potential suspects look exactly like everyone else. I've seen people on Brooklyn subway platforms pay close attention to a devout Muslim wearing a beard, round cap and kurta. In Bombay, a man with such a mundane appearance might be your doctor, fruitwallah (fruit vendor) or cabbie.

I've heard subway workers in Brooklyn tell passengers that large packages are more likely to be searched, though I've never actually seen anyone check an upright double bass case. In Bombay, street merchants cart their entire stock between home and work every day.

There is, however, one area in which Bombay's open train system is somewhat safer than the New York subway. Bombers seek out enclosed spaces because of the laws of physics -- an explosion loses strength rapidly with distance from its source. Bombers want closed compartments to amplify the blast. A bomb of a train carriage with open-air doors and windows is potentially less lethal to those inside because blast energy has ways to dissipate.

The trading port of Bombay has always valued openness. Like that other long, narrow, high-rise island, Manhattan, Bombay is a polyglot riot of immigrants. Portuguese Christian names jostle for space on the walls of the city's apartment buildings with the names of those of Hindu, Sikh, Muslim, Parsee and Buddhist descent. Bombay is also a high-speed city. The vada pav (potato chutney sandwich) sellers on the street are as brusque and efficient as New York hot dog vendors.

Space, as in New York, is a luxury. It's worth money. On Tuesday, the bombers targeted the first-class cars. The people they killed were probably not paying for padded seats, for the first-class carriages often have the same hard benches and missing doors as the second-class cars. For a ticket that costs nearly 10 times more, first-class passengers are buying a tiny bit of extra space. They're renting elbow room and a sliver of air so that their commute passes a little more comfortably.

Today, the trains are running again in Bombay. I have not ridden them yet. I will, but riding them will never again be such a simple, innocent, sweaty pleasure. I've heard, however, that anyone who dares to ride in the first-class coaches can now have as much air and space and comfort as he or she wants. Nobody is taking first class.