On foot and by rickshaw, from train station to hospital, a Bombay writer surveys the aftermath of the bombings. 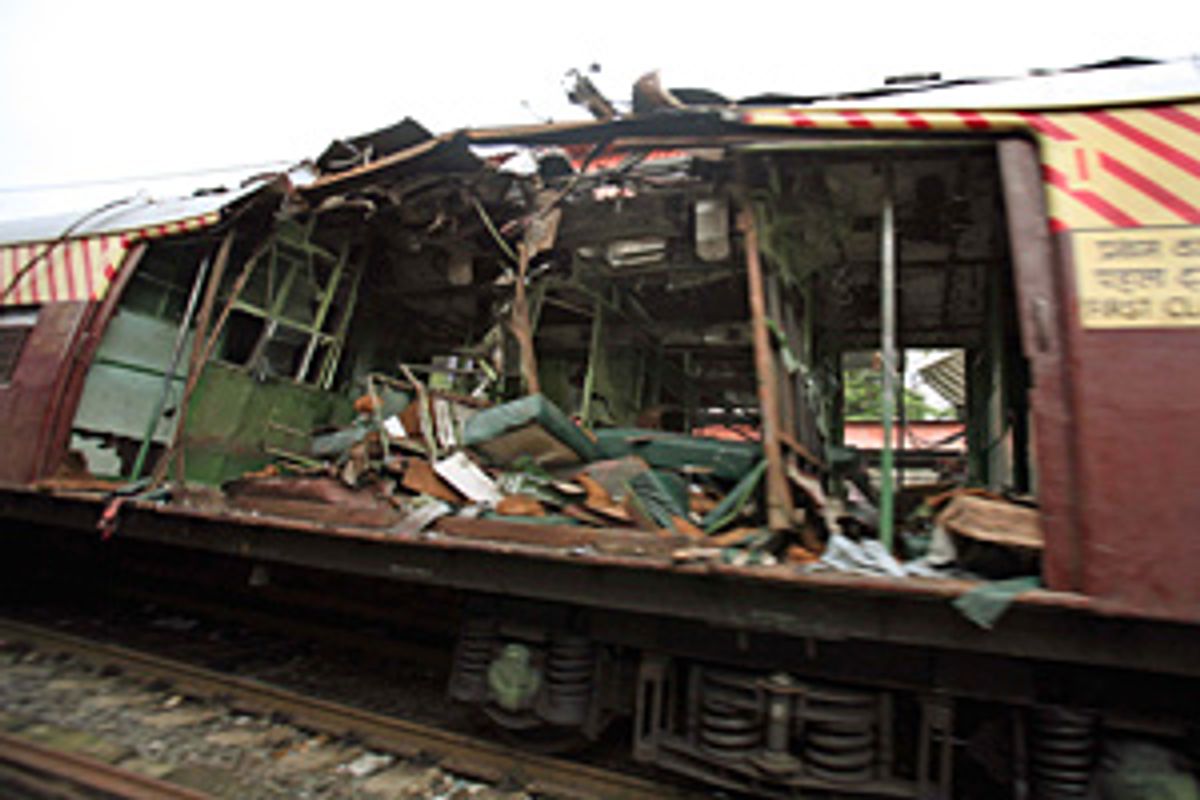 In the city of bomb attacks on sardine-packed trains, it's the morning after. The palms sway in the sea breeze, the sun is breaking through the gray clouds, and I am writing this in a car as we drive across town, remembering Tuesday night. For the first time in a while, there's no rain and I don't hear any sirens. For hours Tuesday, that's all I heard, all I felt. Rain, sirens.

Yesterday. Bandra, where I live, is considered the "first" suburb of Bombay, the oldest and closest to the city. When I get to the Bandra train station just after 8 p.m. on Tuesday, not two hours after the bombing, it's unnaturally, almost eerily, quiet. Lots of people, but so quiet. Yet the eeriness itself seems entirely natural. It's that kind of day, that kind of bomb-blighted day. Platforms are swept clear of the usual throngs of rush hour, public-address speakers blare monotonous announcements about blasts, no trains, please stay calm and cooperate with the authorities.

I walk down to the southern end of the platform, dark here, and immediately find hands reaching up to me from the tracks two feet below. Long lines of men and women off the trains that have stopped south of here, walking home along the tracks through the rain, asking me to help them onto the platform. One man hauls himself up, then tells me in inimitable Bombay Hindi: "Bahut log marela!"

I continue south along the tracks and it is wet, slippery. Plenty of obstacles that I can only sense in this dark. Snatches of never-before conversation -- blast at Khar, no at Santa Cruz. None at Churchgate. Many dead, many dead. One train at Borivali, right?

Just short of Mahim, the station that's a mile and a half away, a train has stopped on the track I'm treading, long, dark and undamaged. A hundred yards on, another train, and the buzz I'm now beginning to hear -- huge crowd on the footbridge above me, huge crowd on the side of the tracks in front -- tells me that this is the one. Train with the blast.

Sure enough. The first-class compartment in the middle of the train looks like someone buckled down to work on it with a blunt can opener. It's just twisted metal now, but I flinch on merely looking at it. Suketu Mehta wrote once, famously, of hands unfurling like petals from a packed Bombay train compartment, reaching out to whisk just that one more commuter onboard. From this train stopped and dark in Mahim, the metal of the train itself unfurls like grotesque petals.

I see no hands.

Hundreds of times I've traveled in these very compartments, at this very time of day. I know as if I were in one right now how people hang from every inch. What happens to people pressed in like that when a bomb goes off in their midst?

Gawkers everywhere. Some squatting on the concrete wall beside the road, some attached -- permanently? -- to the fence beside the track, others like me just standing on the stones and filth everywhere. At the jagged hole in the train, no more than 10 or 15 yards away now, a huddle of men. Their demeanor suggests that they are bringing out a body. They don't, but one suddenly breaks from the huddle and rushes at us gawkers with a long stick. "Get going, go on, get out of here!" he screams. "What're you looking at!" What are we looking at, actually?

Another huddler steps over and suggests that instead of standing around watching, we might go donate blood at nearby hospitals.

The rain is now a lashing torrent, the traffic on the road outside a confused mess trying to negotiate through the crowds. Sirens again in the distance. Every time a bus comes through, a part of the crowd coalesces into a coordinated shouting whole, thumping on the side of the bus for it to stop, urging stranded women commuters -- only the women, for now -- in. Down the road, another band of men stops taxis and cars; in one case, they actually roll a small white car backward, pushing that hard. Some serious and heated negotiation with the driver done, a few women fold themselves into the back and the car moves on. A shopkeeper watching this from the sidewalk tells me that the police should be here doing this, organizing buses to take people home. Instead the "public" -- the Bombay word for "common man" -- is doing it itself.

A young man in front of me suddenly opens his umbrella, and a sharp point from its canopy catches me painfully on my lip. For a moment, I could swear that's blood flowing off my chin; then I understand it's just rain.

Blood on my mind. Sirens in my ear.

Farther still, there are announcements from a brightly lighted tent on the other side of the road. When I cross, two young men press glasses of water into my hands. I drink one down gratefully, conscious that I'm hardly a man in need here. They tell me, "How far do you have to go, friend? If home is a long distance away, stop and have a bite to eat first." They point at the tent. This is a youth group -- the Sai Seva Mitra Mandal, or Sai Service and Friendship Club -- from a slum pocket along this stretch of road, whose sign I have passed for years without a second thought. Here they are in this driving rain, not two hours after this ghastly tragedy unfolded, organized with water, food, tables and a tent, all for fellow citizens left with no choice but to walk the long miles home.

People talk a lot about the spirit of Bombay. At this spot, I see it, I feel it, I drink it down, here with this young man scanning my unscarred face anxiously. "I'm OK," I tell him, minor lump in my throat. "Thank you so much and good for you."

Much slogging through the rain later, I am at the hospital. Three ambulances scream in ahead of me, then the gates close and several cops are on guard outside, with a larger circle of people outside them. I push through and ask one in uniform, "Can I go in and donate blood?" Polite yet firm, he tells me, "Not now. Please stand over there. We'll come get you if we need blood; for now please don't make things more difficult."

I hear him. Two reporters tell me, 22 bodies here, number can go up!

A woman steps up and addresses the crowd: "They're taking blood at Holy Family Hospital nearby. Why don't you all go over there?" Five or six men peel away from the crowd -- unaccountably, I'm reminded again of petals -- and walk on with her and me. She says, "I'm from a family of doctors. I went and told those cops I could be of help to any women victims who need to be changed or something. But they wouldn't let me in. At least I can give blood."

A rickshaw driver offers to take us to the hospital. Two of the men pile in, then beckon to the woman. "Won't you come along?" she says to me in a frantic whisper. "I can't go in that alone!"

She doesn't know me from Adam, this woman. But before I can reply, the driver senses her unease and says, "Come along, sister, nothing to worry about! Look, you sit in front with me!"

We pile in and we're off. "I know you," says the woman, turning to me. "Aren't our sons in the same class at school?" (She does know me from Adam.) The driver tells us all, "I brought four bodies in this rickshaw." At Holy Family, he refuses any money. After ferrying bodies, and in this time, I suppose money means little.

The lot of us, dripping water on the hospital's spotless floors, stride up to the blood bank. There's time to get their names: Binaifer the woman, Shoukat the driver, Tabrez, Maaz, Anil and Nawaz. We have, ladies and gentlemen, sound the trumpets, a Hindu, a Christian, four Muslims, a Parsee and an agnostic (me). All here to give blood for faceless fellow humans. (Not my blood, after all, because I donated just two months ago.) It really shouldn't, but this touches me somewhere deep, something fierce.

There's a sudden small commotion in the corridor. Man in shorts and blood on a stretcher, wheeled swiftly into the ICU by plastic-aproned nurses.

Outside as I walk home, the rain eases.

Dilip D'Souza was trained in computer science at Brown University and lived in the States ten years. He now writes for his meals in Bombay. He has published two books, Branded by Law and The Narmada Dammed, and has won several awards for his writing.