Discover the former Soviet Union's smallest republic through its fantastic national epic, an exceptional memoir and a love letter from a great Russian poet. 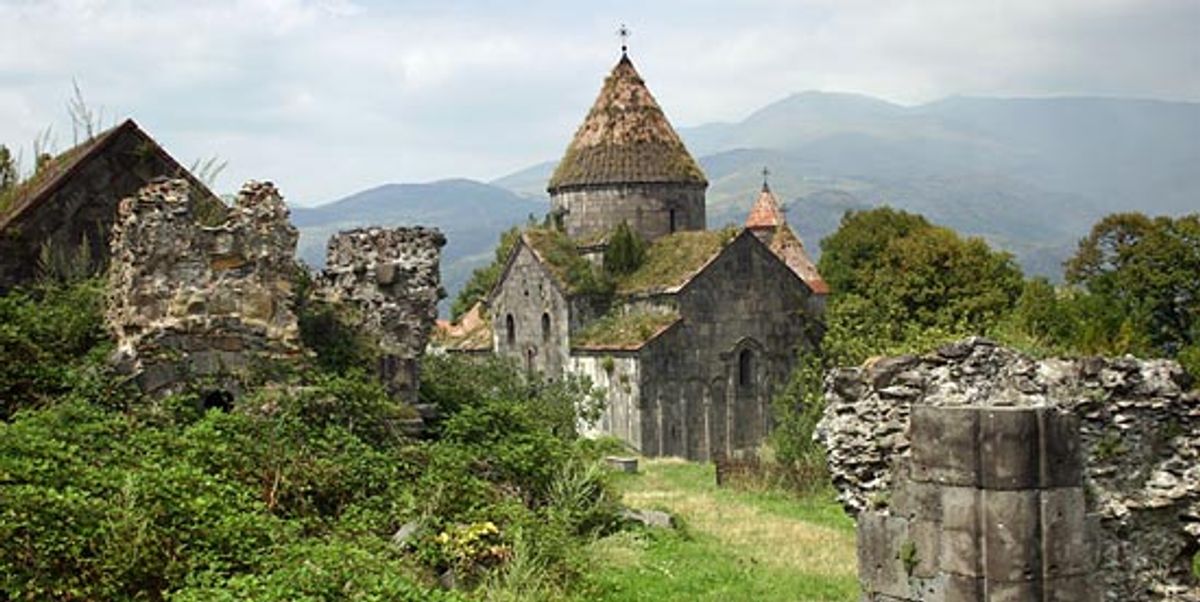 There are two things you are guaranteed to find in the living room of any average household in Yerevan, the capital of Armenia, even 15 years after the end of Soviet rule: the cheap, orange-brown lacquered bookcases that came from the Communist Party's official department of home décor, and a beautiful, sweeping collection of books.

These books -- European masterworks translated into Russian -- were also standard-issue goods from the party; identical bindings bearing identical titles line identical shelves in identical apartment blocks, from Estonia to Kazakhstan. But unlike the dreary furniture, the book sets remain a celebrated part of life in the former Soviet Union, not least in Armenia, which was the Union's smallest republic.

Literature is tremendously important to Armenians. Yet for most of the 20th century, Armenians studied and wrote in Russian. The Armenian language, an Indo-European tongue and script with no living cousins, never fell out of use -- not even close. But it would be an understatement to say that Armenia's literary history has been variously shaped, impeded and complicated by foreign conquest -- Russian, Ottoman, Persian and Byzantine, in reverse order, dating back to the first century B.C., when the Armenian Kingdom began its decline. Thus the survival of national identity has been Armenian literature's most persistent theme.

The best example, steeped in patriotism so exaggerated it is both moving and hilarious, is the Armenian national epic, "Daredevils of Sassoun." The story, which survived for centuries solely by oral tradition, tells of four generations of superhuman men who ruled the region of Sassoun, in what is now southeastern Turkey, against real and fictional enemies from Egypt, Baghdad, Iran and China.

I'm not usually one for stories about talking horses and magical trees, stories in which whole kingdoms are built and slaughtered in the course of a paragraph. But as you read about the strongmen of Sassoun, imagine that it is the hour of sunset in a village of 50 mud houses hidden in the mountains that surround Lake Van. Imagine that one of the elderly men of the village, after a day spent piling lamb's wool into a cart, sits down in a circle of kinsmen to tell you this story. He nods to heaven, asks God to have mercy on the characters he is about to introduce, and proceeds to unravel the saga of how two brothers, Balthazar and Sanasar, drank water from a "milk-fountain" and grew to be mighty kings. Their romantic interludes (bordering on pornographic) and their love of aged wine complicated their efforts to secure the future of the Armenian nation. The storyteller cannot change the story, and the listeners cannot leave before the end. Taken for what it is -- a peasant people's national fantasy -- "Daredevils of Sassoun" is a remarkable, telling piece of literature.

Although I am Armenian, I have to admit that nationalism, a fine theme for a folk epic, is not a great foundation for aesthetically minded literature. Gone are nuance, ambiguity, introspection; in their place stand pride, hostility and moralizing. As in "Daredevils of Sassoun," these elements are abundant in the Armenian historical novel, a form popularized by major Armenian writers of the 19th and early 20th centuries such as Khachik Dashtents and Raffi. Such nationalism is likewise typical of memoirs and novels about the Armenian genocide -- the 1915 deportation and massacre of 1 million Armenians by the Ottoman government. (For the most lucid and broad-minded analysis of 1915 and the period leading up to it, read "The Great Game of Genocide: Imperialism, Nationalism and the Destruction of the Ottoman Armenians," a recent book by the young British historian Donald Bloxham.) Most memoirs on this subject are written by diaspora Armenians who are genocide survivors, or by their descendants, and to be sure, none of those books will fail to make you cry. But most are powerful because what happened was so heinous, not because of the writing itself.

An important exception is "Passage to Ararat," a 1975 book by Michael J. Arlen, a former TV critic for the New Yorker who grew up with an Armenian father who refused to discuss the genocide. "Passage to Ararat" charts Arlen's efforts to understand why his father distanced himself so forcefully from Armenian identity. In New York, where Arlen lives, he befriends Armenians whose obsession with the genocide contrasts starkly with his father's behavior. Struggling to be emotionally open without being sentimental, Arlen writes of the Armenians' obsession that "it would have been cruel or trivial to align this refrain with the standard simile of the broken record: the sounds of a needle that would not, could not, lift itself out of a particular, twisted groove." He eventually goes to Yerevan, where he studies Armenian history, tracing centuries of battle, subjugation and resilience up to the present moment. Arlen's honesty and depth, and the beauty of his prose, put this book in a class by itself among ethnic-identity memoirs.

Arlen took inspiration from another skeptic, Osip Mandelstam, the great Russian-Jewish poet of the Soviet era. In 1930, Mandelstam traveled to Armenia to fulfill a long-standing curiosity about a people whom he had earlier called the "younger sister to the Jewish nation." His long essay, "Journey to Armenia," first published in a Russian literary magazine and later as a book, is a love letter to the country he found.

Mandelstam was by then a big-city Muscovite, and was moved by the generosity of the people he met during his travels. In the section about life in the village of Biurakan, he writes: "A childless old couple welcomed us for the night into the bosom of their tent. The old woman moved about and worked with lachrymose, retiring and blessing motions as she prepared a smoky supper and the felt bedding: 'Here, take this felt! Here, take a blanket  and tell us something about Moscow.' Our hosts prepared for bed. An oil wick lit up the tent, giving it the height of a railroad station. The wife took out a coarse army nightshirt and dressed her husband in it. I felt as shy as if I were in a palace."

This is a rare, impressionistic picture of Armenian life during the earliest years of the Soviet era. For a more recent analysis of the empire and its 14 satellites, there is no better source than "Lenin's Tomb" (1993), by New Yorker editor and former Washington Post Moscow correspondent David Remnick. "Lenin's Tomb" is a masterly chronicle of the collapse of the Socialist regime. If Armenia is mentioned only a few times, this itself is an important lesson in what it meant to be on the periphery of the Soviet experiment: for Armenia, a fateful combination of dependence and irrelevance.

But before we pity Armenia, or Armenian literature, for the years it spent pinned under foreign influence, we should note the confidence -- the envy, even -- that Mandelstam expressed for the Armenian language. In "Journey to Armenia," on a quest to find a language tutor, he wrote: "The Armenian language cannot be worn down; its boots are of stone. Naturally, its word is thickwalled, its semivowels layered with air  I experienced joy in pronouncing sounds forbidden to Russian lips, mysterious sounds, outcast sounds, and perhaps, on some deep level, even shameful sounds. There was some magnificent boiling water in a pewter teapot, and suddenly a pinch of marvelous black tea was tossed into it. That's how I felt about the Armenian language."

An Armenian -- even a nationalist -- couldn't have said it better.