A report from Lebanon's south, ravaged by retaliatory Israeli strikes. 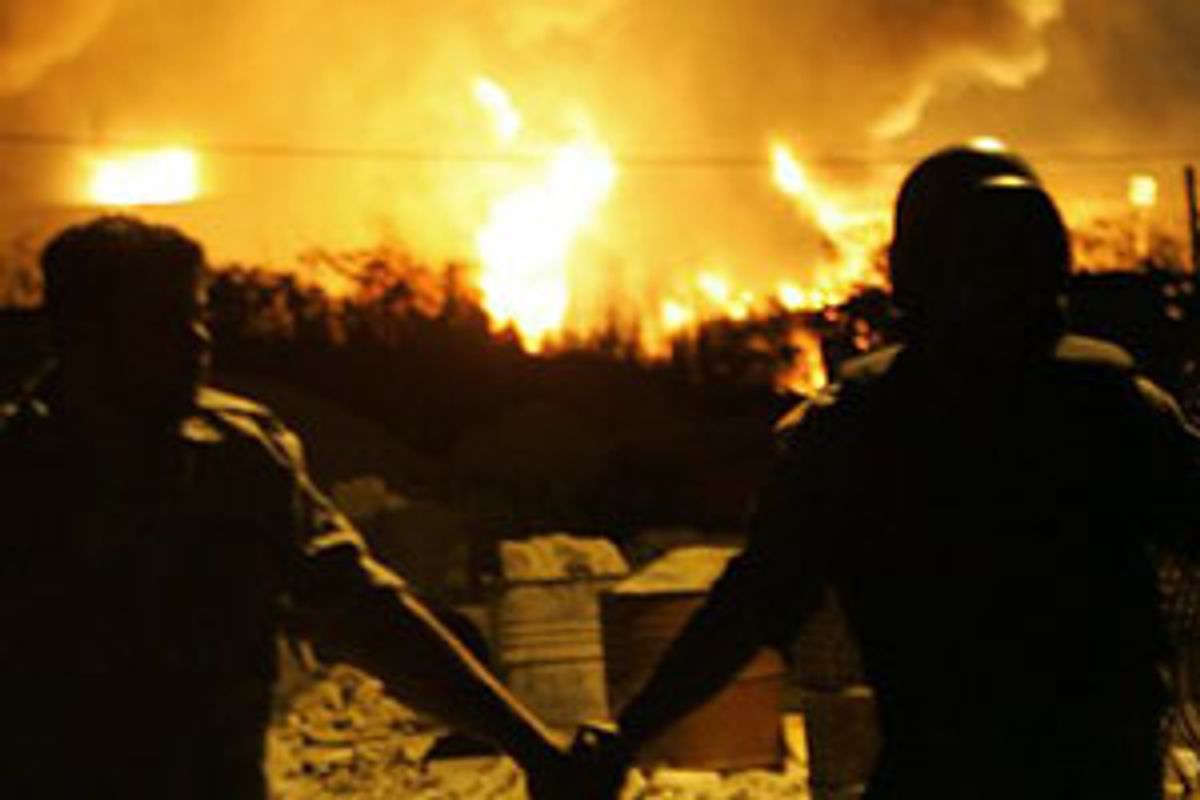 Beirutis expected the worst when word came Wednesday that Hezbollah, the militant group based in south Lebanon, had killed eight Israeli soldiers near the border and seized two more. The region was already on edge, with the Israeli siege of Gaza in its 18th day following the Palestinian kidnapping of an Israel Defense Forces soldier. Everyone knew that Israeli retaliation would be severe. The only question was whether Israel would confine itself to attacks on Hezbollah, or if it would hold Lebanon responsible and launch attacks across the board. Israel chose the latter course and has meted out savage punishment to this small country.

On Wednesday, IDF strikes destroyed the bridges connecting south Lebanon to the rest of the country. By nightfall, Israeli fighters had blasted the major highways, essentially sealing off the southern third from the center of the country. Early morning Thursday, warplanes bombed Rafiq Hariri Beirut International Airport, knocking out the runways. Minutes later, an Israeli rocket struck Hezbollah's television station, al-Manar, wounding one person and sending local media into a frenzy over access to the scene that dispersed only when an IDF fighter screamed overhead and people ran for cover.

And so it continued all day. Bridges used just an hour before were smashed into rubble. Gunboats off the coast fired wildly into Palestinian militant camps. Attack helicopters ignited a fuel depot at the airport, while leaflets rained down upon the residents of the rundown Hezbollah-controlled neighborhoods in southern Beirut, warning them to flee or face further airstrikes aimed at the Hezbollah leadership. The IDF also announced a total blockade of the country by air and sea. Late Thursday night it bombed the only major route out of Lebanon, the road to Damascus. In all, Israeli airstrikes were reported to have killed at least 55 civilians.

Israeli generals have said they want to deal Hezbollah a devastating blow and permanently clear the group away from Israel's northern border. Whether they can achieve this is uncertain. While there is no way the militant group can stand up to this kind of aerial assault, Hezbollah is a much more formidable adversary than the Palestinians militants in Gaza. The Islamic Resistance of Lebanon, as Hezbollah prefers to be called, is probably the most competent organization in the entire Arab Middle East. No other Arab army has defeated the mighty IDF, one of the most powerful armies in the world, as Hezbollah did in 2000 when it drove it out of south Lebanon. Syria has been whipped half a dozen times at Israeli hands. Jordan has lost so much land and earned so many refugees that it chose to anger the entire rest of the Arab world (and two-thirds of its population) and sue for a long-term peace deal just to avoid future losses. And Egypt? The most powerful and populous state in the Arab world doesn't even want Gaza back, let alone have another go at the IDF.

Hezbollah remains the only military force that the Israelis really respect, based on its top-notch training and equipment supplied by Iran, and a brand of Shiite Islam that lends both extreme discipline and total fearlessness. Hezbollah boasts thousands of fighters, many battle-hardened, backed by a significant number of artillery pieces and rockets. It constitutes no threat to invade and hold northern Israel. But the daring and successful operation it pulled off on Wednesday shows that it cannot be taken lightly. Ambushing an IDF Humvee patrol, Hezbollah forces killed three Israeli soldiers and seized two more. When the Israelis sent tanks across the border in pursuit, a powerful cache of buried explosives destroyed one tank, killing its four-man crew. And in the face of massive air, artillery and naval strikes against Lebanese infrastructure and military targets, Hezbollah has managed to fire hundreds of rockets and artillery shells into northern Israel; late on Thursday, rockets were reported to have struck the major Israeli city of Haifa. Even the U.S. Navy reportedly pulled its ships out of Haifa's ports.

On Wednesday, Hezbollah leader Sayeed Hassan Nasrallah proclaimed that his group had kidnapped the soldiers and set a major prisoner swap as the condition of their release.

Israel rejected any negotiations and launched massive retaliatory strikes. "The Lebanese government needs to understand that there is a price for its inaction. They need to understand that if they are not able to deal with terror, we will have no choice but to fight with them," IDF chief of staff Dan Halutz told the Israeli newspaper Haaretz on Thursday.

But while Israel's actions could be defended as a deterrent against an act of aggression, they also amount to the collective punishment of the Lebanese society and government, which have little say over Hezbollah's activities.

The situation puts the Lebanese government and military in an extremely tough position. The government simply cannot control Hezbollah. It cannot take it on politically because of its support among Lebanon's Shiite Muslim population, in a country where almost everyone still votes for their religion's candidate regardless of merit. Nor can the well-trained but tiny and underequipped Lebanese army take on the Shiite militia.

Lebanese Prime Minister Fouad Siniora has had to walk a political tightrope over Hezbollah's close relationship with Syria. Now, Hezbollah's actions and the Israeli response have put him in an almost surreal position. A favorite of the Bush administration for throwing out the Syrian military occupation last year in the wake of Rafiq Hariri's murder (widely believed by Syrian agents), Lebanon's new government has been gently pushing Hezbollah into political dialogue, with the goal of disarming the group or integrating it into the Lebanese army. But now Siniora's government faces wanton destruction at the hands of America's other favorite Middle East country, which is demanding two kidnapped soldiers that Siniora simply cannot deliver.

Most of the country's non-Shiites distrust Hezbollah for remaining an armed group outside government control, and join the Shiites in disliking Israel for its policies in occupied Palestine and its bloody history in Lebanon. The past two days are forcing people to choose sides, but most are refusing to do so. They appear to see this as a fight between two sworn enemies with a long history that has little to do with them directly.

So far the Lebanese seem to be choosing to hoard bottled water and stay quiet. It's hard to imagine them picking either side, even as they watch their highways, airports and villages being bombed, while hordes of Arab tourists flee to Damascus, taking with them the tourism money Lebanon counts on to survive.

But down in the south, in a village called al-Dweir, amid Hezbollah's strongest supporters, the case is clear-cut. They regard Hezbollah as having mounted a military operation against a military target -- and see civilians paying the price.

At about 4 a.m. Thursday morning, Israeli warplanes bombed the home of Sayeed Adel Akkash, a Shiite cleric probably associated with Hezbollah. The bomb flattened the home and killed Akkash, his wife and their 10 children, leaving only three bodies identifiable as such and a surprisingly small pile of body parts.

Dr. Yousef Akkash is a French-educated surgeon and Adel's brother. It is his job to oversee the funeral, as his father is too distraught to do so. He enters the basement of a mosque near the family home and joins two doctors whose job it is to separate out body parts and try to figure out which part should go in which grave. It's extremely messy. Finally, with a cleric's approval, they decide to put the 12 mangled corpses into six graves.

Dr. Adel claims to not know if his brother really was a Hezbollah official but says he hopes it's true, "so there can be some reason behind this tragedy."

He's upset and angry but can still talk of peace with the people who did this. "All people want peace," he tells me in English. "As do the people of Lebanon, but we need justice amid this occupation. We want peace and justice for all people, Muslim and Christian, Arab and Jew."

But in the makeshift morgue he holds up part of a baby's body and asks the recoiling reporters to come closer.

"Come see the arms and weapons my brother had," he says, holding up a tiny arm. "Here is your 'terrorist.'"

Denials aside, this is clearly a Hezbollah funeral, as shown by the flags all around it and the arrival of a bunch of men who are clearly part of the group. And the funeral is being watched. Even as we can hear Hezbollah rockets being fired at Israel just a few miles away, the constant buzz of a unmanned surveillance drone can be heard. And from time to time, an IDF fighter roars overhead.

A man named Tahir Ahmed asks me where I am from. When I tell him, without a trace of hostility he asks me to "tell the American people we are thankful for your country because it gives weapons to Israel that are used to kill our children."

I begin to talk to Tahir Ahmed about this statement, and he elaborates. "We distinguish between your people and your government. But if your country did not cover Israel, then Israel could not do these things. There is a big error in the mentality of the American people. Because of movies and Hollywood, you think like cowboys. There is a good guy and a bad guy. And you see the Arab as the bad guy and the Jew as a good guy. It is naive to see only good and bad in the world."

"If Hezbollah kidnapped two soldiers, this is a matter between two military groups. Why do they involve children? She was not attacking Tel Aviv, he says of Akkash's 6-month-old daughter, killed in the strike. "She was sleeping with her family. I hope the American people think of a 6-month-old-girl killed with an American fighter, flown by an Israeli pilot. If she was with a soldier at the front, then these things happen. But she was asleep with her family."

Late Thursday, Israeli officials said they were not ruling out a ground invasion. For many Lebanese, caught once again in a fight not of their making, an old and terrible history seems to be repeating itself.