Wide open space dotted with the occasional rodeo and watering hole -- you'll need more than Annie Proulx to make it through the long winter here. 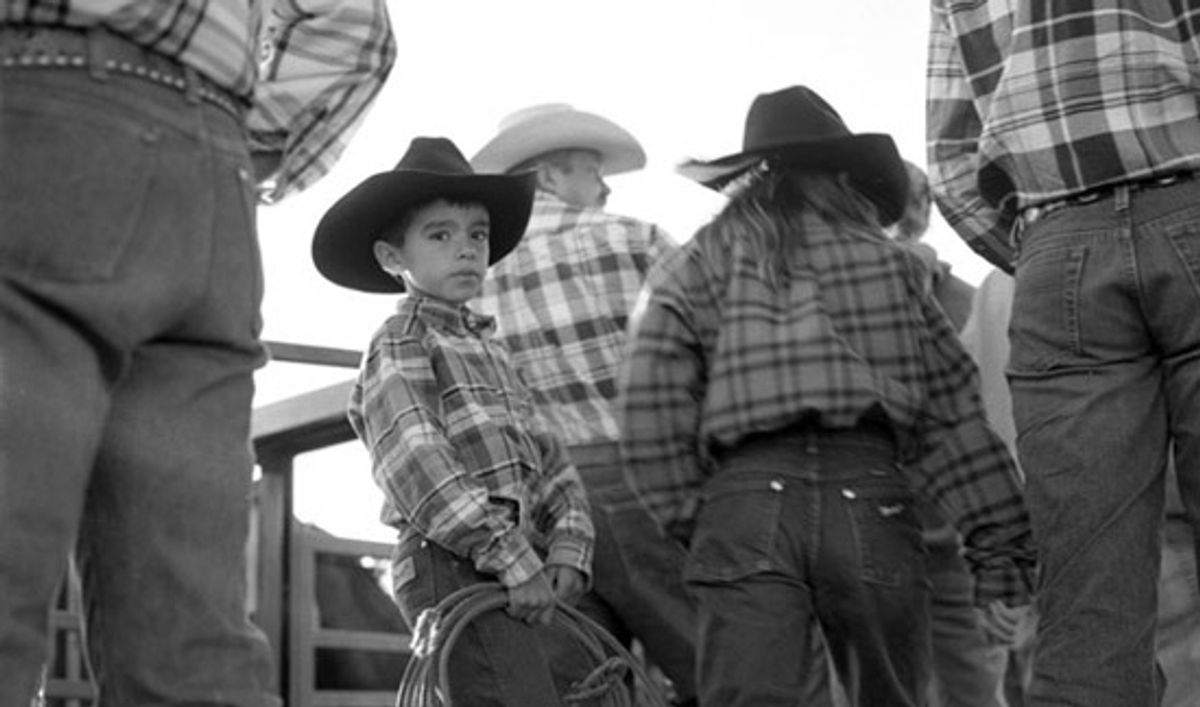 Wyoming is the ninth biggest state in the union and, with less than half a million inhabitants, the least populated. Space -- bulging hours of snow-dusted sagebrush -- takes over from the pauses that pass for towns. And where space eventually ends and mountains jag the horizon, there is no relief from vertigo, only the idea that all that open land has thrust upward into fields of permanent snow and granite. Perhaps this explains why the state's writers appear to be in love with the earth in the way of people who have had to fight to stay attached to it; their words feel dirt-gripped and hard won. "Winter lasts six months here," writes the courageous and poetic Gretel Ehrlich in her stunningly lyrical love letter to Wyoming, "The Solace of Open Spaces" (1985). "At twenty, thirty and forty degrees below zero, not only does your car not work, but neither do your mind and body. The landscape is a dungeon of space."

So continue your open-air imprisonment with James Galvin, the most addictive and inspired of Wyoming's writers whose poetry -- "Lethal Frequencies" (1994) is my favorite of his anthologies -- is not only readable, but rereadable and often quirky. "It's going to rain for two reasons/ What do you think the other one is," he writes in "The Other Reason It Rains, Etc." The poem is dedicated to Ray Woster and Lyle Van Waning, who are also the central characters of his critically acclaimed 1992 book, "The Meadow," in which Galvin tells of a patch of ground on the Colorado-Wyoming border, a sort of no-man's land, beloved by the men who work it. Weaving back and forth in time, Galvin introduces us to Appleton Worster, who homesteaded the meadow in 1895, and App's son Ray, and then to Lyle, the meadow's final owner (although it would be more fair to say the men were owned by the land than the other way around).

Writes Galvin: "The way people watch television while they eat -- looking up to the TV and down to take a bite and back up  that's how Lyle watches the meadow out the south window while he eats his breakfast. He's hooked on the plot and he doesn't want to miss anything."

Tough individualism, self-reliance and an obsession with the kind of pastimes that can really get you hurt are celebrated above all in this state. The elemental memoir "Where Rivers Change Direction" (1999) by Mark Spragg is another way to see how a man can love land and horses and suck in the pain of a kicked rib, or a broken heart. "I was a boy," Spragg writes, "and I believed deeply in the sightedness of horses." It's believing in the kindness of men that becomes the more difficult lesson for Spragg in a place where men are more respected the less they say about the way they feel.

The Wyoming license plate sports a bucking bronco -- rodeo is the state sport and there isn't a town in the hard-drinking place that doesn't have a rodeo ground or two and a string of drinking holes (the Cowboy, the Rancher and the Stagecoach are three within spitting distance of my home). Until very recently it was legal to drink alcohol and drive at the same time on the state's roads. "Come to Wyoming and get unhorsed" seems to be the message, and no one takes the unhorsing of a soul more seriously than Annie Proulx in her 1999 collection of short stories, "Close Range," which includes the story made famous by its recent cinematic success, "Brokeback Mountain."

In her Wyoming stories -- there are 11 in all -- Proulx looks at the price people pay for all the hard-drinking, bronco-bucking bravado. Murder, addiction, abuse, bad sex -- everything Wyoming would prefer to pretend it does not stand for, but which comprise the increasingly authentic underbelly of a place worn down by boom-and-bust oil-and-gas cycles and a cowboy culture that gets closer to myth than reality with every passing year. Proulx suggests that the flip side of the cowboy code of each man for himself is that love is a luxury such an ethos doesn't have time for. Take this devastating passage at the conclusion of the story "The Bunchgrass Edge of the World."

'Look what you done,' said Ottaline to her, 'You killed him.'

'Me! That's what cutting the wheat's done.'

'He done it hisself,' called old Red from the porch. It was clear to him the way things had to go. They'd plant Aladdin. Ottaline and her scytheman would run the ranch. Wauneta would pack her suitcases and head for the slot machines. The minute she was out of sight he intended to move out of the pantry and back upstairs. The main thing in life was staying power. That was it: stand around long enough and you'd get to sit down."

So much for the cowboys. What of the Indians? Geoffrey O'Gara's "What You See in Clear Water" (2000), an account of the often beleaguered and always underrepresented Arapaho and Shoshone tribes living on the enormous and gorgeous Wind River Reservation, not only sheds light on the conflict over water rights in the American West, but gives a beautifully rendered historical perspective to the relationship between the indigenous people and the men and women who came later. His writing is, all at once, cleaved to the land and authoritatively researched. "A century ago, when a journey from the Union Pacific depot in Rawlins, Wyoming, to the Shoshone Indian Reservation meant 150 miles in a hard saddle across windy tablelands set with waist-high sagebrush, Indian Inspector James McLaughlin trekked to Wind River Canyon," he writes. "On the long trip north, he rarely looked up at the tall skidding clouds, or down at the sudden draws that dropped through the floor of the plains. It was spring, but barely spring, and scalloped ridges of snow still snugged against the lee sides of the hills."

On the other end of the scale is Tim Sandlin, who would look ridiculous in a cowboy hat, but is quite at home in a trailer park in Wyoming's tourist traps, mildly wacky in an aging hippie sort of way, and not at all ashamed of not being a rodeo rider. Kicking the whole cowboy genre in the chaps, Sandlin's prose is laugh-out-loud funny, irreverent, gaudy and absolutely refreshing. He's like P.G. Wodehouse, set in modern day Wyoming, with a bit too much debauchery and plenty of sly wisdom. Here is his stranded, delirious narrator, Loren Paul, at the beginning of his 1998 novel "Western Swing": "One of the rules I made many years ago, back when I used to make rules: A good time is not worth having if you can't remember it. That's why gaps are like death. Death is not a good time." But Sandlin most definitely is, and will provide welcome relief from an overdose of the last of the Old West that a trip to Wyoming is likely to provide.

Alexandra Fuller is the author of the books "Don't Let's Go to the Dogs Tonight: An African Childhood" and "Scribbling the Cat: Travels with an African Soldier."