Steve Carell runs off with our hearts in this sweet-tempered dysfunctional-family road movie. 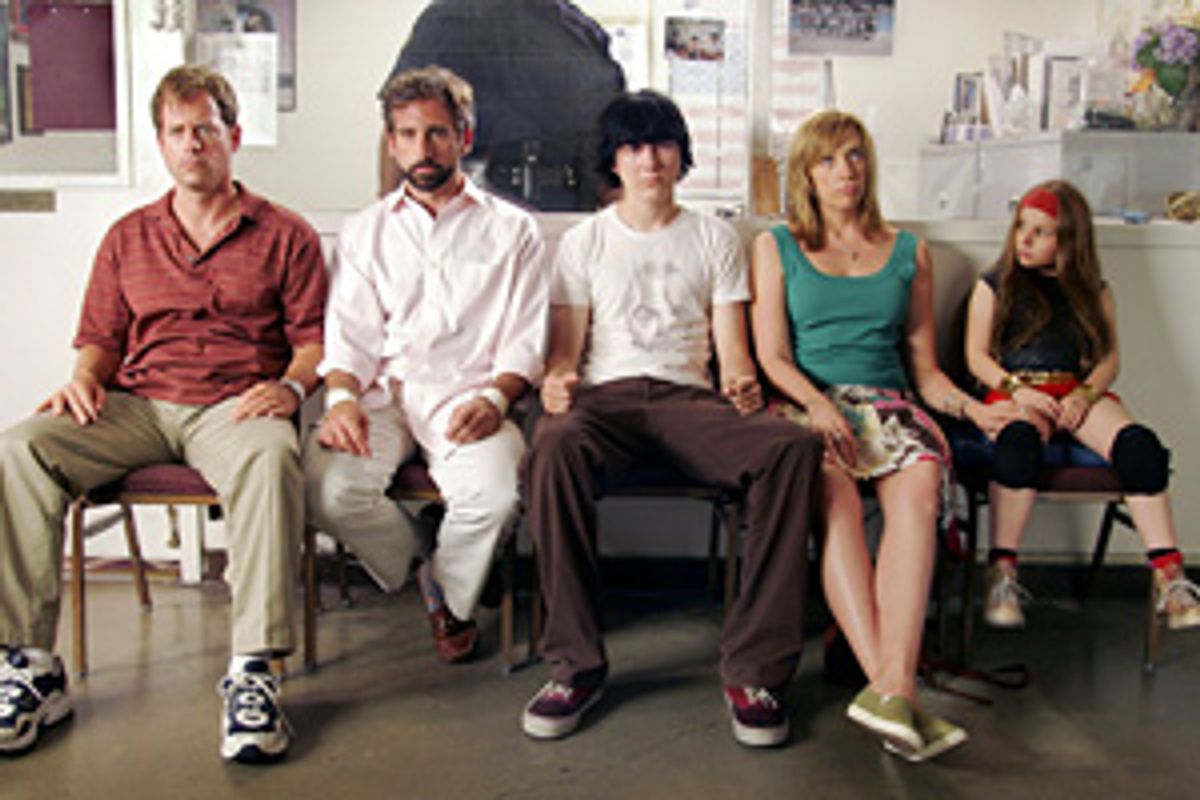 The dysfunctional-family road movie "Little Miss Sunshine," about a ragtag group of relations desperate to get the youngest member to a kiddie beauty pageant in another town, tries to pretend it's less cute than it is. Grandpa has a potty mouth; the suicidal gay uncle is a Proust scholar; the teenage son hates everyone and has taken a vow of silence: Each character has his or her own personal idiosyncratic hang tag for easy identification, and once the inevitable on-the-road calamities start piling up, their collective neuroses boil over into a carefully scripted froth. Still, "Little Miss Sunshine" isn't the kind of movie you want to beat up on: It's sweet-tempered at its core, and even when it's trying too hard to reinforce its own quirks, the charms of its actors filter through effortlessly. This is an ensemble movie in which every performer is beautifully in sync -- a potent reverse metaphor for the way most families aren't.

Mom and Pop are Sheryl and Richard, played by Toni Collette and Greg Kinnear: He's a blatantly unsuccessful (and annoying) motivational speaker, waiting for his big break. That means her job is the one holding the family together financially, and you can see how the stress of that has frayed her nerves. Sheryl certainly has enough to deal with: Her brother, Frank (Steve Carell), has just been sprung from the hospital after attempting suicide, spurred by a failed love affair. Their son, Dwayne (Paul Dano), is a taciturn lad who doesn't yet know what his personality is, so he's crafted one out of youthful posturing: He's devoted to Nietzsche, and he's taken that aforementioned vow of silence; he dreams of someday being a pilot. Kinnear's father, played by Alan Arkin, also lives with the family, gracing their dinner table with nonstop foul language -- a gimmick that's funny at first and less funny later, although it ultimately wings around toward being funny again.

The youngest member of the family, Olive (Abigail Breslin), is the most poised and well adjusted of all of them, and she has one big dream: to win the Little Miss Sunshine beauty pageant. Thanks to a stroke of luck (or, rather, the fact that another contestant has been disqualified), she gets a shot at the finals, in Redondo Beach, Calif. The family lives in Albuquerque, N.M., and there isn't enough money for Olive and her mom to fly to the pageant. None of the family members can be left alone at the house -- Dwayne is too combustible, Frank too fragile -- so the whole family piles into a decrepit VW bus to make the trip.

Their mishaps along the way -- including, of course, the expected vehicle malfunctions, which are handled with some nice visual cleverness here -- become settings to show how the nuttiness of families is sometimes the crazy glue that keeps them together. This is the feature debut of Jonathan Dayton and Valerie Faris (who have made videos for R.E.M., Janet Jackson and Smashing Pumpkins, and who also directed the fondly remembered early-'80s MTV show "The Cutting Edge"); the script is by Michael Arndt. The problem with "Little Miss Sunshine" is that the filmmakers are maybe a little too pleased with their conceit -- the movie's eccentricities often feel as if they've sprung from some master plan. Even so, they come up with a few surprises: The picture's climax, in which Olive finally gets to perform the talent routine her grandpa has taught her, is a smart, funny twist on the more horrific qualities of child beauty pageants, in which kids are ghoulishly dolled up to be mini sex objects.

Dayton and Faris clearly know how to work with actors: This is a wonderful ensemble cast, without a clunker in the bunch. Collette, as always, is disarming -- her Sheryl is a well-meaning, frazzled mom who never descends into caricature. And Breslin is one of those rare child actors who's cute while managing to avoid unbearable moppetry.

And then there's Steve Carell. There are plenty of good comic actors around. But Carell, whose "The 40-Year-Old Virgin" became a surprise hit last summer, has a spectacularly subtle touch that sets him apart. When the sullen Dwayne confides that he hates his life so much, he'd just like to go to sleep until he's a full-fledged grown-up, Frank responds with deadpan words of wisdom: "If you sleep until you're 18, think of all the suffering you're going to miss." And Carell's physical comedy is close to genius. At one point, we see Frank running toward a set of automatic plate-glass doors -- it's that nerdy, straight-armed style of running, intense and supernaturally speedy, as if the gods had taken pity on a poor slowpoke and sent down some extra jolts of adrenaline. He slows down, just a beat, before those doors automatically open -- and that tiny hesitation, coupled with the flicker of anxious surprise that flashes across his face, may be the funniest and most inspired thing in the movie, even though it feels so light and throwaway. Greatness, sometimes, is the stuff that happens in the corners.