Maternal depression afflicts millions of American women with hyper-irritability and withdrawal. In a new book, 400 suffering moms tell their stories. 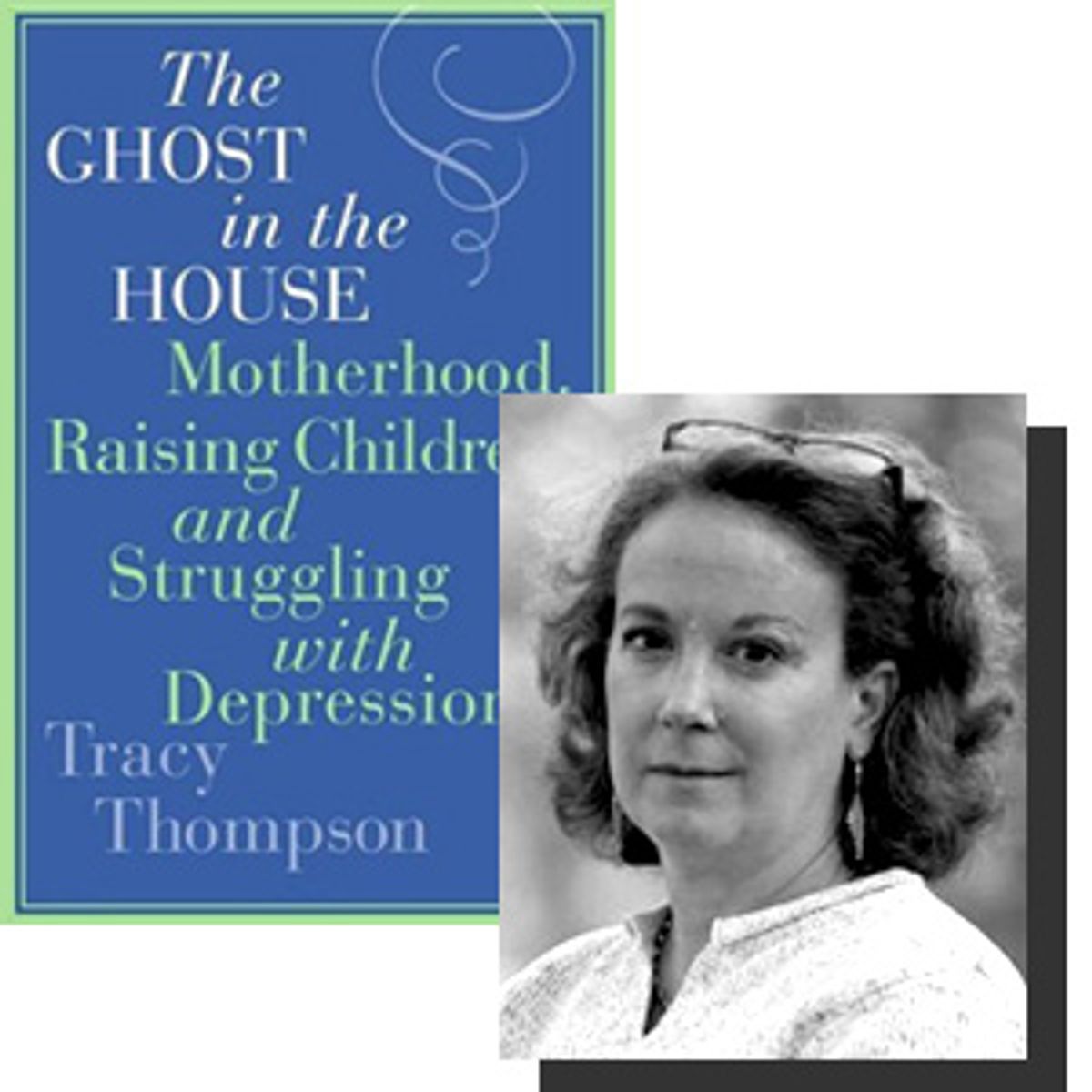 Betty Friedan famously called the unhappiness of mothers in the post-World War II era "the problem that has no name." More than 40 years after the publication of "The Feminine Mystique," we're still trying to come up with a diagnosis and cure.

Enter Tracy Thompson, a former Washington Post reporter and author of a previous memoir about her pre-parenthood struggles with depression, "The Beast." Thompson set out to discover how common maternal depression was, and how it affects children, after suffering her own bout of post-motherhood blues. In her new book, "The Ghost in the House: Motherhood, Raising Children and Struggling With Depression," she expanded her personal story into the realm of parenthood by working with an Emory University psychologist to survey almost 400 mostly middle-class moms diagnosed with clinical depression who responded to queries posted in O: The Oprah Magazine and a number of newspapers.

We know that approximately 12 million of the 19 million Americans who are estimated to suffer from depression annually are female, and that its incidence peaks between the ages of 25 to 44, the years a woman is most likely to have kids. That is probably not a coincidence; a study published by the Journal of Health and Social Behavior in December 2005 found parents significantly more likely to report depression than their childless counterparts. However, firm numbers on depression in moms themselves are hard to come by. Thompson claims 4 million, but admits that is only a guess.

Yet the emotional distress of "Ghost's" maternal sufferers is undeniable. Thompson weaved their stories throughout her book to highlight both her own experiences and ongoing research on the topic, making it clear that mommy misery affects more than just a few chattering-class parents with media access, like recent chroniclers Judith Warner and Leslie Morgan Steiner. "I went through periods that I just yelled all the time," one mother wrote. "Then I would be sad, cry and not get out of bed." Another said, "Friends or neighbors would come over and I just wouldn't go to the door," adding, "It was just overwhelming, day to day, taking care of three little boys."

Ultimately, however, Thompson is more concerned with cure than cause and it's hard not to notice that most of the tales told in "Ghost" end, like her own, with someone reaching for a bottle of pills. While one is happy to hear of reduced misery, it does make one wonder how "The Feminine Mystique" would have turned out if written today. Betty, meet Zoloft.

Salon talked to Thompson recently by phone about the many manifestations maternal depression takes and how society may contribute the problem.

Who is the ghost in the house?

Is it considered taboo that mothers, who are supposed to bask in the joy of their children, could feel any other way?

There is particular stigma attached to talking about depression in the context of motherhood. The cultural ideal we have of motherhood has no room for days in which you just don't want to even hear your child's voice. Motherhood is not supposed to be that way. Motherhood is supposed to make you happy. There is a widespread perception that postpartum depression is the beginning and end of the story for mothers. Yet, this other part is very, very real. Maternal depression is, to me, where depression and motherhood intersect. And it's where depression on the part of the mother reaches out to ensnare the kid. It begins to define your interactions in ways that are harmful, both to the kids and to the mom.

What tends to characterize maternal depression?

Some mothers experience it as being very, very withdrawn and totally nonresponsive. The other symptom is hyper-irritability, and I have to confess, that's the worst thing for me. If I'm really, really depressed, I'm super-sensitive to noise and even happy noise is painful, and if the kids are fighting or something I just can't stand it.

How does maternal depression affect children?

Depression in a mom teaches kids depressive ways of thinking. Like there's a kind of all-or-nothing thinking such [that] if one thing goes bad then it means that other things are going to go bad, and it means furthermore that you're bad and that probably you caused it. A lot of the women in the survey wrote about what perfectionists their kids were, and how they didn't give themselves credit for their own accomplishments. They tend to have more school difficulties, social adjustment difficulties and anxiety. They are also much more likely to suffer from depression as adults.

Could your book just make mothers feel guilty, like, here's something else we're doing wrong?

Well, you should feel guilty if you know you're depressed and you know you're doing bad things to the kids and you don't get off your duff and do something about it. It can be as simple as going to doctor and describing symptoms. He or she can suggest a psychiatrist; you take a short-term dose of Zoloft and you are better. A lot of times it is more complicated than that. Medication is not always the answer. Cognitive behavior therapy helps a lot. I talked to several women who say exercise basically controls their symptoms. I'm not saying women who don't take care of it are bad moms, just that these are women who are suffering from an illness.

Is it really all biological or hormonal as some would have us believe, or do the conditions of modern motherhood contribute to depression at this point or even cause maternal depression for some women?

The roots of depression are complex, but one essential ingredient for it happening is stress. The standards for what constitutes a good mother have been ratcheting upward for the past 20 or 30 years. When I was a kid and I was bored, my mom would get out the ironing board and say, "This ought to keep you busy." These days parents, particularly mothers, feel obligated to provide their kids with quality time and enriching activities. One of the mothers in the survey wrote to me that she sometimes feels guilty if she reads the newspaper while her little boy is eating breakfast. There's no such thing as just sitting in a room with the kid and hanging out -- you've got to be "doing" something.

You write about postpartum depression being affiliated with various stressful conditions in pregnancy and childbirth such as a traumatic delivery and post-birth isolation. Do you think it's possible that the way we have children in this country is encouraging maternal depression?

I definitely think that not having a network of women around you right after you have the baby is a contributor. Maybe I'm overstating this because I felt the lack of it so acutely, but there are other cultures where women are put in a little hut and told not to do anything for 40 days, and other women take care of them and it's just accepted. That's what you need after you give birth. I think we're insane the way we handle birth in this culture. After six weeks of maternity leave, you've got to throw on pantyhose and schlep back downtown.

If we changed the societal expectations of and pressures on mothers, would be there be less maternal depression?

I think the culture we live in puts unrealistic expectations on mothers. Motherhood can seem like a competitive sport, like being a good housewife in the 1950s. If we had a more realistic idea of motherhood and more social support, like better-quality childcare, then I think the stress level overall would decrease and that in turn might contribute to less maternal depression.

What do you think in society could change to make this problem less common or severe?

Figuring out that motherhood is really hard work and it has occupational hazards and this is one of them. It's a job, and it's not always an easy job. Men have always known this, otherwise they'd be clamoring to stay home. We need to get people to take motherhood as a topic seriously and do more than just pay lip service to it as an institution. And then to get mothers to take themselves seriously. They can't take care of their kids if they're not taking care of themselves.