Woody Allen teams up with Scarlett Johansson in this kooky comic murder-mystery -- and makes us love him again. 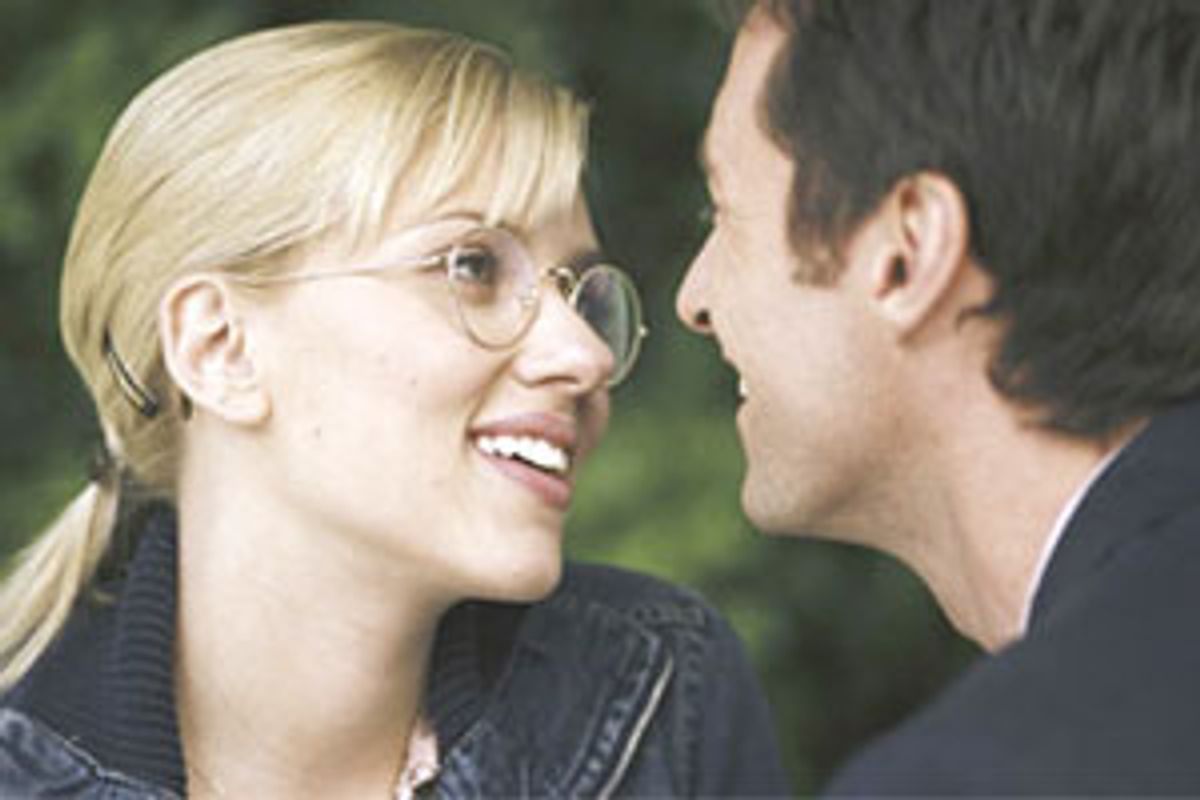 There have been few career trajectories in recent years more depressing than that of Woody Allen. Allen has been characteristically prolific in the past decade, and yet the movies he's made have left plenty of people wondering why he even bothered. Even his most ardent fans have had to do some pretty fancy two-stepping to make a case for fungus-covered nuggets like "Anything Else" and the possibly even moldier "Melinda and Melinda." Even the widely admired "Match Point" felt like a stiff, overstuffed exercise, a picture made by a desperate filmmaker who felt his relevancy slipping away from him.

Maybe that's why it's such a relief to find that with his latest picture, "Scoop," Allen has reaffirmed his place in the world. This is a modest movie, with a relaxed, casual feel and a touch of looniness: You'd have to be a little nuts to cast Ian McShane as a deceased British journalist who escapes from the Grim Reaper's barge expressly to impart a hot news tip to a feisty journalism student, played by Scarlett Johansson. But that's exactly the kind of crazy spark that's been missing from nearly all of Allen's recent (and even some not-so-recent) comedies. "Scoop" is light and breezy, devoid of the hand-wringing self-consciousness that has marred so many of Allen's pictures. Nestled as it is amid the clamor of the late-summer blockbusters, it's the kind of small pleasure that can make you feel intensely grateful.

Just how does McShane's character -- his name is Joe Strombel, and as the wonderful McShane plays him, he's craggy right down to his ectoplasmic soul -- contact Johansson's Sondra Pransky, an American journalism student who's spending a few months with some tony London friends? He appears to her inside a magician's "deneutralizer," of course: Sondra is a volunteer who's been plucked from the audience by the vaudeville-style prestidigitator known as Splendini, aka Sid Waterman (Allen). Strombel has it on good authority that the man behind a series of recent London murders is none other than eminently respectable aristocrat Peter Lyman (played by the dazzling-as-ever Hugh Jackman).

Sondra is eager to pursue the story, and she drags the reluctant Sid with her, telling everyone he's her father, a disguise that pleases neither of them. (At one point she sputters at him, "And stop telling people I sprang from your loins.") Allen and Johansson are terrific together, partly because she's clearly having a great time playing a younger, female version of Allen. In "Anything Else," Jason Biggs attempted, with painful results, to mimic Allen's lilting-and-stammering line delivery. But Johansson, her eyes peeping out from behind a pair of owlish glasses, slips into Allen's shtick naturally -- her performance is a teasing homage, not a strained impersonation.

Allen has great fun volleying back. It took far too long for him to stop casting himself as a romantic lead. Now, Allen casts himself as a cranky old Jewish guy, and the change is freeing for him. Some of the jokes are so gentle, they hit you only on the rebound: Casting a glance around the meticulously manicured garden of an English lord -- he and Sondra are posing as rich Americans -- he remarks, "My topiary moose is beginning to look a bit shabby around the antlers." Later, he engages a proper English lady on the subject of religious background: "I was born into the Hebrew persuasion, but when I got older I converted to narcissism."

In "Scoop," Allen channels his stand-up persona into a fictional character, and the metaphorical sleight-of-hand works beautifully. Even Allen's face looks transformed: He seems younger, possibly because he's given up fighting his age. It's as if he's grown into the caricatures people used to draw 30 years ago: His eyebrows swoop down toward those trademark heavy-rimmed glasses, forming a perfect triangle of anxiety -- at last, he's comfortable with the old guy he was destined to become, and his ease translates into a kind of youthfulness. That's as it should be: Even if you've hated nearly all of Allen's recent movies, as I have, there's no getting around the fact that he has the kind of energy even much younger directors would envy. It's especially gratifying that in the winter of his career, he's at last made a movie that feels like summer again.