The fallout from Qana

Human Rights Watch denounces Israel for war crimes, while a halt to airstrikes lasted only a few hours. 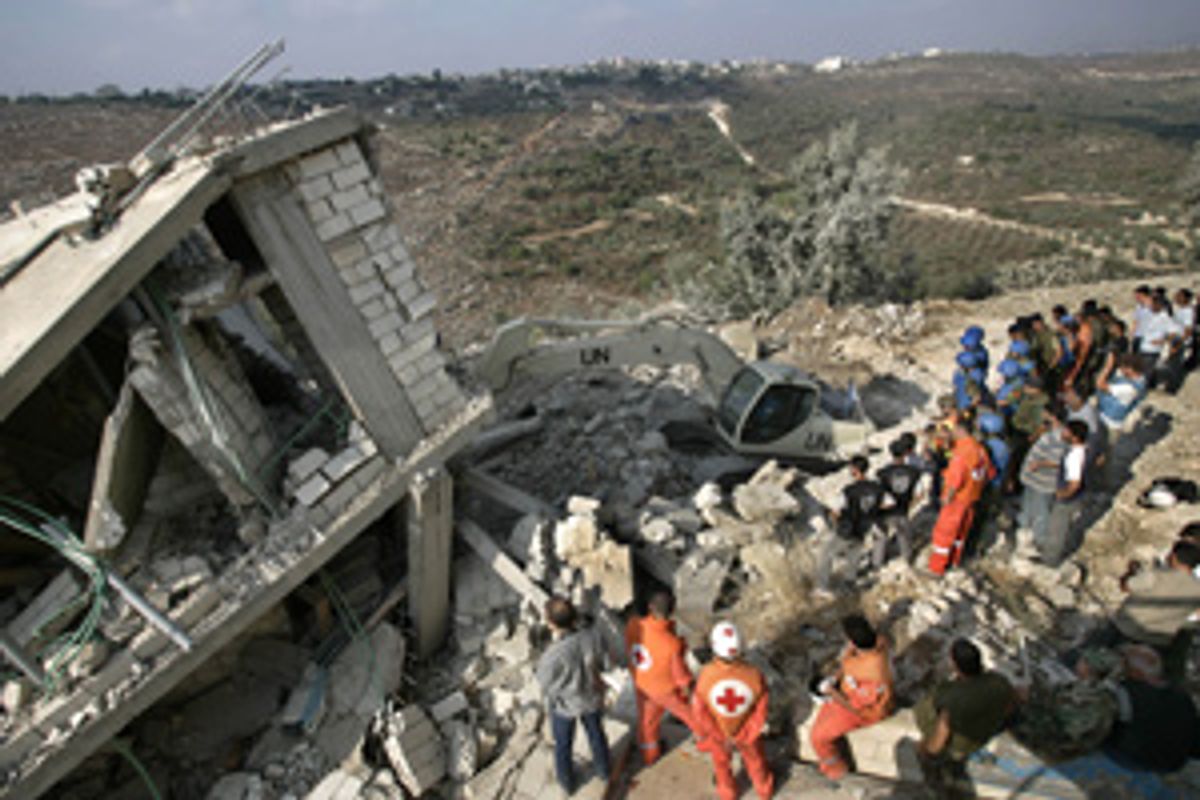 The Israeli bombardments were so intense that it took rescue teams eight hours to reach the southern Lebanese village of Qana yesterday. They found a three-story building collapsed sideways by missiles fired by Israeli planes and 54 people, including 27 children, crushed to death. The hours that followed were the stuff of nightmares: hardened Red Cross workers in tears, fighting for breath; body after body pulled, with bare hands, from the rubble of the reinforced basement; little corpses wrapped in plastic, tied at head and foot and laid side by side.

Not one of the dead was a fighter, and no arms were found in the building. Locals denied Israeli claims that Hezbollah fighters had been firing from Qana. It just wasn't true, they said. "America is responsible for this!" The Israelis, meanwhile, claim more than 150 rockets have been fired from Qana. On Sunday night the Israel Air Force chief of staff showed reporters video footage of what he said was Hezbollah fighters hiding rocket launchers in Qana.

The carnage, which comes 10 years after Israeli forces killed more than 100 civilians in Qana during Operation Grapes of Wrath, prompted Human Rights Watch to rush out a two-page statement accusing the Israeli Defense Forces of war crimes in advance of a longer report that will be published later this week. Responsibility for the deaths rested "squarely" with the Israeli military, HRW said. It was the latest product of a bombing campaign that the IDF has waged in Lebanon over the past 18 days, leaving hundreds of people dead, the vast majority of them civilians.

The rights group called on U.N. Secretary General Kofi Annan to establish an International Commission of Inquiry to investigate serious violations of international law in Lebanon. "To date," it said, "Israel has not presented any evidence to show that Hezbollah was present in or around the building that was struck at the time of the attack."

"Qana was not a mistake," said Peter Bouckaert, HRW's emergencies director and one of two HRW researchers currently in Lebanon. "It was not an accident. It was the natural outcome of a policy of not distinguishing between civilian and military targets. If you have a daily small massacre of civilians you're going to end up with a big one sooner or later."

At an emergency session of the Security Council in New York, Annan expressed "moral outrage" over the killings and pleaded for an immediate cease-fire. U.S. Secretary of State Condoleezza Rice canceled a visit to Beirut as protesters stormed U.N. headquarters in the Lebanese capital, desisting only when Hezbollah clerics intervened. The secretary's decision may have been wise: Televised pictures of her during her first visit here a week ago, smiling and laughing at a meeting with grim-faced Lebanese leaders, have made her a figure of scorn among many Lebanese.

Something like Qana, the bloodiest single strike by the IDF since war erupted on July 12, had been feared ever since Israeli Justice Minister Haim Ramon redefined Hezbollah last week to include all the civilians who have not left south Lebanon.

"Everyone who is still in south Lebanon is linked to Hezbollah," Ramon said, suggesting that "maximum firepower has to be used." As justification, he cited the international community's refusal to call for an immediate cease-fire at last week's Rome meeting, from which, he said, "we have in effect obtained the authorization to continue our operations until Hezbollah is no longer present in southern Lebanon." Many civilians are unable to leave, however, because airstrikes have destroyed roads and bridges, and others are afraid of being targeted as they go.

"A serious war crime may be imminent," Patrick McGreevy, director of the Center for American Studies and Research at the American University of Beirut, wrote just three days before the Qana attack. "What may be in store if the frustrated IDF begins to treat all people in south Lebanon as enemies will be a war crime of a different magnitude."

So far, Secretary of State Rice has managed to withstand international pressure for a cease-fire. But her position has not been strengthened by Israel's failure to make many military gains -- either by decapitating the Hezbollah leadership in the southern suburbs of Beirut, or by stopping Hezbollah's rocket attacks into Israel.

"All of Israel's military cards at this stage are in the form of two Lebanese villages near the border that have been captured by the IDF," Ze'ev Schiff, military analyst of the Ha'aretz newspaper, commented on Sunday. "If the military cards Israel is holding do not improve with the continuation of the fighting, it will result in a diplomatic solution that will leave the Hezbollah rocket arsenal in southern Lebanon in its place. The diplomatic solution will necessarily be a reflection of the military realities on the ground."

Hezbollah itself is confident that the battle is already won even though the war, for the moment, continues. "The military situation for us is perfect," a longtime party activist said after Israeli troops crossed back into Lebanon at the beginning of the battle for Maroun al-Ras last week, returning to the Lebanese "mud" six years after they left it. "The Israelis are destroying everything. Even children are saying, 'We have nothing to lose now.'"

Nothing, that is, except their lives. On Monday morning, the Israel Air Force announced that it would cease bombing for 48 hours to investigate the incident in Qana. But Hezbollah continued its own attacks, and the Israeli ceasefire lasted only a few hours.

Julie Flint was an ABC correspondent in Lebanon from 1983 to 1990. She has lived in Lebanon since 1981, and is currently a consultant to the International Criminal Court on Darfur. She authored a report on Darfur for Human Rights Watch in 2004.