They shoot racehorses, don't they?

Kentucky Derby winner Barbaro will likely have to be put down. Will the troubled sport of horseracing meet the same fate? 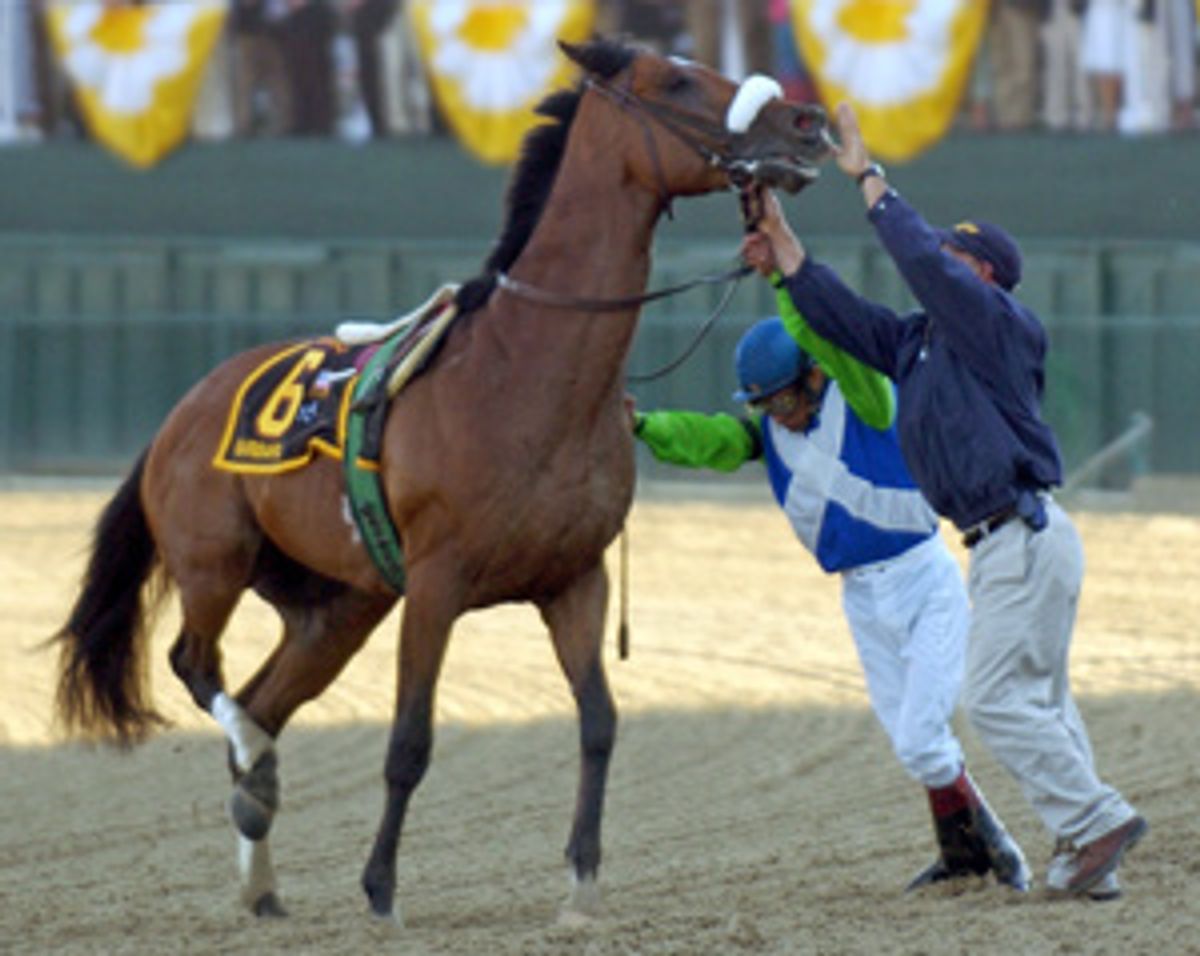 For the TV audience on Preakness day this May, it seemed like a case of "No, it can't be." It was weird enough that Barbaro, the wickedly fit Triple Crown hopeful, had overpowered the magnetized starting gate and blazed up the track all alone. But within seconds of the official start of the race a few minutes later, he was suddenly standing in the wake of the obliviously galloping field, holding his hind leg in the air like a dog who'd stepped on a tack. It hung oddly because the fetlock (ankle) joint was shattered. "Please don't put him down!" spectators screamed at the attending veterinarian.

The hubbub continued after he was hauled off to surgery in New Bolton, Penn., making Barbaro the only horse in history ever to receive 20,000 get-well cards. But six weeks later, reports of his seesawing recovery have all but vanished from the news, and a second surprise visit in mid-July from his jockey, Edgar Prado, was certainly meant as a goodbye. Walk into any well-staffed barn on a Monday and you'll be met with the same grave question: "Did they put him down yet?" The rumors in racing communities such as Saratoga Springs, the biggest summer racing meet in the U.S., proliferate. "They won't do it on a weekend." "The owner wants to let him go, but the insurance companies won't let him. "They should have done it right there on the track." "He's in a lot of pain, that's for sure," is the one you hear most from people who've seen horses "founder," or contract laminitis, which is the crippling disease that has afflicted Barbaro's injured hind foot. Michael Matz, Barbaro's trainer, says he's not getting his hopes up; Barbaro's vet at New Bolton, Dr. Dean Richardson, has said everything from "he looks good" to "he's doing as well as can be expected." Over this past weekend, the odds for his recovery were judged at 50-50. Nobody wants it to happen, but his demise is more likely than not, and New Bolton's expertise in putting it off shouldn't be taken as evidence that somehow, this horse can live through a trauma that only a handful in history have ever survived.

Horses comport themselves a bit like cats and dogs, but they're built more like rabbits. Their legs feel like nothing but cool bone wrapped in silky skin with tight, steely cables running up the back -- a huge liability in an animal with a natural bent toward self-destruction. Prey animals first and foremost, horses are unable to stifle their instinct to flee when injured, and they're maddeningly delicate. The undefeated Ruffian broke her leg in her 1975 match race with Foolish Pleasure and rebroke it days later by kicking the cast to smithereens. Fifteen years afterward, another brilliant filly, Go For Wand, went down in a Breeder's Cup race, plunged up again, and thrashed spastically forward with her ruptured tendon pulled halfway from its sheath and her foot nearly torn off. Many in the audience reached involuntarily toward her as if they could stop her in their arms. "Their sobs and gasps built to a roaring wail," The New York Times reported. She never made it into the ambulance. The now-defunct National Sports Daily marked her death with a one-word headline: "Tragedy."

When Barbaro's ordeal was moved behind closed doors of the multimillion-dollar veterinary clinic at New Bolton, racing breathed a collective sigh of relief. The industry has been waning for years, and is already plagued by management scandals as well as by competition from other forms of betting. A horse's public death is likely to scandalize those new fans who've been lured into the stands by the heroic, almost-human careers of Seabiscuit, Funny Cide and Smarty Jones. It doesn't help that trainers and riders are fond of muttering that accidents like Barbaro's happen every day. "Every day" is a bit of an exaggeration, the statistic being estimated at one breakdown for every 2,000 starts. It's still adequate shorthand for the crude and arbitrary way that talented animals, hard work and money get slammed into the turf. Money, of course, is seen as the corrupting force in this situation. The public teeters on the verge of pronouncing the one truth that insiders are unable or unwilling to acknowledge -- that racing is cruel, that animal sports are outdated, and that the big shots and trainers don't care because it's all about the purse.

Dealing a death blow to racing may be on more people's minds than usual, but the industry, at least in New York, seems to be doing a pretty good job of wounding itself. The New York Racing Association, which administers the three thoroughbred tracks in the state -- Aqueduct, Belmont and Saratoga -- has been nailed for tax evasion, awarding no-bid contracts, and other acts of sleazy nepotism. When the NYRA's franchise ends later this year, what's likely to come next sounds straight out of Las Vegas. The MGM Casino wants a piece of the action, as does Magna Entertainment, a subsidiary of an auto supply empire. Their proposals revolve around installing "year-round entertainment centers with on-season racing and off-season simulcasting." In other words, video poker, slot machines and other forms of bloodless, mechanized gambling.

Magna already owns Pimlico and 10 other tracks outside New York, and Pimlico's current management can't refute the current speculation that the track will be sold and the remainder of Maryland's racing consolidated at Laurel, or worse yet, somewhere out of state. A year ago, the rumors were thick that once the summer meet was over, Pimlico, which has been likened to a NASCAR track in the ghetto, would never reopen.

Other ideas to "save" racing are even more drastic. Some visionaries of the brave new track would seek to exploit the star power of a few very valuable horses to increase the "handle," or money taken in from betting. A company in San Francisco has even unveiled its intention to race clones. All over the country, historic tracks are closing because people are staying home in droves, a sure sign that horses, besides being horses, are just another thing to bet on.

As our understanding of animal consciousness continues to develop, the indicators for acts of cruelty change. When an animal goes down in agony despite our efforts to save it, the degree of cruelty does indeed seem to reside in whether or not the people close by can show they care. A trainer who tries to dismiss a horse's racetrack death by saying it's "just business," as someone actually told a New York Times reporter recently, is every horse lover's worst nightmare, but not necessarily every horse's. For that, you have to consult court records detailing the crimes of individuals who "love" their animals so much they can't bear to part with them even when they can't feed them. Failing that, any episode of "Animal Cops Houston" will suffice. The definition of cruelty is inseparable from our image of it, and that's not a bad thing, even if it's not always accurate. Only public participation can keep industries that employ animals from their lowest common denominator of exploitation.

The paradox of racing is that it is at heart a backyard sport, and it's mostly populated by decent horses and decent people. Some wind up at Churchill Downs, and some get shipped off to dusty ovals in New York's Finger Lakes region (called "giving them the Finger" in Saratoga). And if you hang around for long enough you'll encounter such memorable individuals as Dixie Baghdad and the trainer who never gave up on him, Dixie being the horse who finally "broke his maiden," or won his first race, at the overripe age of 6. No such foibles would ever be tolerated in a colt worth a cool million, let alone 10 times that. The flip side, though, is that if Barbaro were just a $25,000 "claimer," he'd have gone out the way a talented but not overly favored horse named Kohut recently did at Belmont: breaking, falling, being quickly encircled by a portable barrier, and sent to his maker while his trainer and his 16-year-old jockey stood by and sobbed.

That's the curse, or perhaps the privilege, of horses who don't carry insurance policies the size of college endowments, or who can't look forward to a long list of mares awaiting each $50,000 ejaculation. Barbaro is now caught in a struggle not of his own making, one from which he'd probably like to be released. "What they did is what they should have done," a hot walker at Saratoga recently said, quoting the steady stream of exercise riders who pass her every morning on the way to their workouts. "But they should have put him down when that first infection set in." That infection in his fractured leg may be better now, but the laminitis in his other hind hoof is intractable, painful and virtually inevitable. The strange territory of blood-rich tissue sandwiched between the hard sole of a horse's foot and its pedal bones can nurture a crippling lameness in any limb that's forced to bear weight. Unlike dogs, horses can't recuperate lying down, or suspended from slings. Their bodies are so heavy they wouldn't be able to breathe properly. Horses have to be moving in order to survive, and Barbaro, with a hare's fleetness and fragility, lost that battle at Pimlico on May 20. It would take a miracle for him to be able to stand at stud, and miracles are in short supply these days.

In the midst of this painful turn of events, a case for racing's civilizing effect is a tricky one to make. "Is life a tragedy? Is life a comedy? Is life a utilitarian task?" Jane Smiley asks in her nonfiction work "A Year at the Races," defining racing as "a business, an art, an athletic contest, a moral and spiritual test." This may seem to be putting too fine a point on it, when the industry itself admits that it's done a poor job of dealing with the thousands of unwanted horses it generates every year. Plenty of "racetrack rejects" go on to have long and brilliant careers as trail horses, show jumpers and companions, but the unlucky ones wind up in the "killer buyer" trucks at auctions, and later on tables in Belgium and especially Japan. Yet Smiley's point resonates in places where racing makes life possible, especially here in Saratoga. The "sport of kings," and the businesses that surround it -- breeding, training, feeding, stabling and entertaining the populace that comes to watch -- are the mainstays of many towns and cities, and also the reason why open land in expensive communities stays open.

Without racing, Lexington, Ky., and velvety pasture-rich towns like mine would degenerate into suburban strip malls. Baltimore would certainly be the poorer for the loss of a 135-year-old bastion of cheap entertainment and tattered glory. There would be no animals there, whole or broken. A branch of agricultural history would be lost, and so would a craft-rich pursuit that at its best offers a tense, exploding vision of a very special sort of animal power. It's far more important, Smiley writes, to go out and support an Art Deco place like Santa Anita than any flesh pit in Vegas, "because every hotel in Vegas is a fake something, and Santa Anita is a real racetrack." Barbaro, Kohut, Dixie Baghdad and every cheap claimer that ever stepped into a starting gate are just as real, and something beautiful is born and dies every time that gate flies open.