Mel on the cross

Hollywood may shun Mel Gibson for his anti-Semitic ravings, but the right wing in George Bush's increasingly hate-filled America won't. 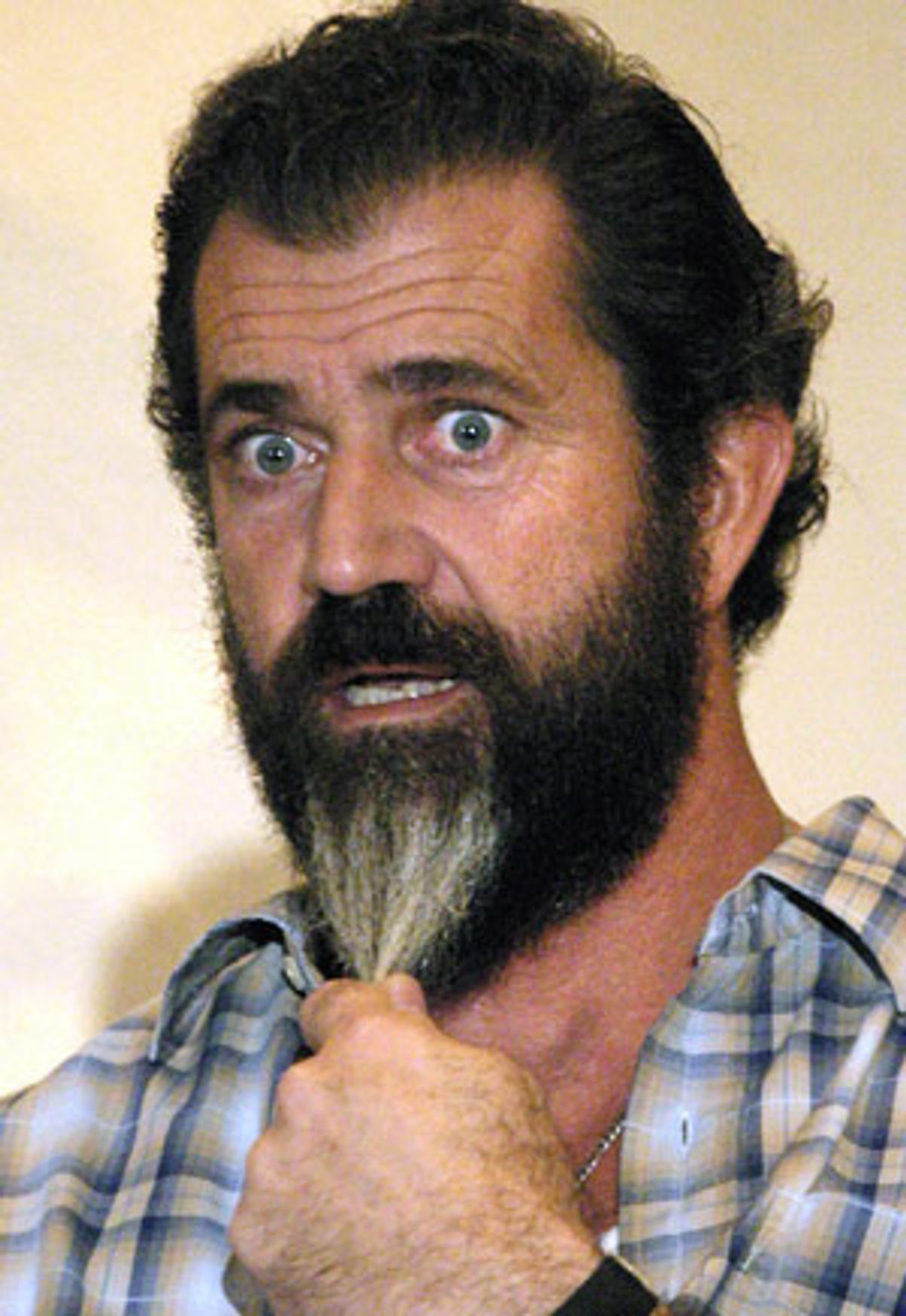 Ordinarily when a celebrity transgresses -- when Lee Tracy urinated off a Mexican hotel balcony in the 1930s, or Ingrid Bergman bore twins out of wedlock in the late 1940s, or Tara Reid does her impersonation of "Girls Gone Wild" -- the moralists descend and mea culpas are issued. So it has been for Mel Gibson. Gibson's anti-Semitic tirade during his DUI arrest last weekend may not be your garden-variety misbehavior, but Gibson was quick to act as if it were  recanting, apologizing and blaming alcoholism for his remarks, on the assumption that he was, as he snarled at the arresting officer, "fucked" and that he needed immediate rehabilitation. (Gibson did check himself into a rehab center Monday.)

Gibson may very well have been right had this occurred, say, 10 years ago. He probably would have been fucked. Sexual peccadilloes and frat boy stunts are forgivable. Hate is not. No matter how many people may harbor the same sentiments as Gibson, hate speech has typically been condemned, and no matter how often hate raises its ugly head, it has usually been beaten back by the forces of relative enlightenment in journalism and the federal government if only because it fails to comport with how most Americans want to see themselves.

Thus when the Ku Klux Klan was revived after World War I, it met general opprobrium even as it professed to be carrying the cudgels for morality and even as it was taking over several jurisdictions, including the state of Oregon. Thus when the popular and populist radio priest of the 1930s, the Rev. Charles Coughlin, began spewing anti-Semitic bile, he was quickly quarantined by the Roosevelt administration, which pressured the church into removing Coughlin from the airwaves after having successfully pressured radio networks into dropping his national broadcasts.

Thus even as racism was the prevailing order of the South, blatant racists like Sen. Theodore Bilbo of Mississippi were excoriated in the national press and ostracized by polite society. And thus in Hollywood itself, where many of the scores of anti-Semites were collected under the shingle of the Motion Picture Alliance for the Preservation of American Ideals, they felt the need to seek cover by enlisting Jewish screenwriter Morrie Ryskind as an officer. Call it hypocrisy, but it was hypocrisy that underscored just how uncomfortable Americans were with overt, publicly declaimed hate.

Or so it was. Mel Gibson, however, does not operate within that elevated environment, because America itself has changed -- one might even say has been radicalized -- since the election of George Bush. The merger of evangelical Christianity, which has long had a tinge of racism and anti-Semitism, with right-wing Republicanism has had many effects on American culture and politics, but perhaps the foremost among them is that it has legitimized attitudes that were previously considered illegitimate by the custodians of the social order. Mel Gibson has not only been the beneficiary of that change; he has courted those who effected it -- those for whom extremism in the defense of their version of liberty is no vice.

This isn't to say that President Bush has actively sanctioned hate speech. Of course he hasn't, and he would be upbraided had he done so. But Bush, in fomenting the culture wars and polarizing the country rather than uniting it as a way of solidifying his base, has given license to hate-mongers under the cover this time of an impending cultural Armageddon. Every time the president insists that he is standing on conviction while his opponents are not, every time he implies that abortion or stem cell research on embryos is a form of murder (despite press secretary Tony Snow's rapid retraction on the latter point), every time he permits Karl Rove to attack Democrats as treasonous and weak on terror, he feeds the hate machine. He doesn't have to be explicitly hateful. He can be hateful by implication. In the past, anti-Semites used words like "internationalist" to blacken Jews without having to come right out and attack them. Now the right has "secularist" and "liberal" that do the same job.

While it's true that some evangelical leaders have become vocal supporters of Israel, it's because the return of Jews to a Jewish homeland fulfills the prophecies of the Book of Revelation, not because they harbor any particular affection for Jews. As E.L. Doctorow once put it, these Christians welcome the apocalypse in which Jews will be condemned to eternal damnation. Some love! Still, it is important to note that the default settings for showing intolerance remain, and the subtle anti-Semitism that evangelical leaders may espouse is not the teeth-baring Nazi kind. Rather it fingers Judaism culturally in contradistinction to Christianity. The trouble with Jews is that they do not accept Christ and yet they seem to insist on their prerogatives in this Christian nation.

This gives vent to the position that in seeking to secularize public education, for example, as a means of defending their own religious beliefs against the majority, Jews are really denying Christians their right to their religion. Seen this way, the subterranean anger toward Jews, which is never openly expressed as anger at Jews but rather an anger toward secular liberals, speaks not to any inherent inferiority of Jews but rather to the danger they pose to Christian values -- the latest manifestation of the old anti-Semitic canard that Jews do not subscribe to American traditions and thus threaten to undermine them.

For whatever personal reasons, and God knows what demons lurk in him, Mel Gibson has been spoiling for a fight with the Jews and got it by baiting them. "The Passion of the Christ," which was widely accused of anti-Semitism for its exaggerated portrayals of Jews and for assigning them primary responsibility for Jesus' death, was really not the story of Jesus' passion; it was the story of Mel Gibson's. He was the one being nailed to the critical cross. Gibson certainly could not have been caught unawares by the criticism; in fact, in many of his so-called secular movies, like "Mad Max" or "Conspiracy Theory," Gibson had also played Christ. One might even say that he made "The Passion" precisely so that he would be persecuted by liberals and Jews -- essentially crucified -- and consequently celebrated by evangelical Christians for his sacrifice.

As it turned out, martyrdom was good business. The film earned nearly $400 million, not, one assumes, because it was a great piece of entertainment or even because it was a great religious experience. What it was, was a great cultural statement -- a thumb in the eye of liberal, secular American popular culture from which Gibson himself had once benefited and which was now vilifying him as the Jews had once vilified Christ. It also proved that Gibson didn't need the old mainstream American audience anymore. He had his evangelicals who would go to his movies to demonstrate how much they hated Hollywood.

But just as Gibson has sought martyrdom, so his evangelical audience was always in search of Christian martyrs: a public school teacher who wants to discuss religious issues in class but is proscribed from doing so, a science teacher who denies evolution but is disciplined for not teaching it, a football coach who wants to pray with his team but is not allowed to do so, a mayor who wants to put up a crèche in a public place but is accused of violating the separation between church and state. Gibson had simply taken his persecution to a larger arena -- from the local news and Fox News to the national screen. Now, with his ill-tempered remarks, he has upped the ante once again. If Disney backs out of distributing his new film, "Apocalypto," or doesn't air his proposed television series on the Holocaust, of all things, Gibson could be screaming that he is yet again suffering for his faith at the hands of infidels.

But as he yells he is unlikely to be marginalized as a bigot, despite the charge by one Hollywood publicist that Gibson had committed a "nuclear disaster," because bigotry in Bush America is just another salient in the battle against the left wing. In the end, Mel Gibson, who avoided the code words and spoke more plainly than his supporters, may not have died for our sins, but he did get drunk for them. For that he is likely to receive a measure of sainthood among some acolytes in a country where hate doesn't carry the stigma it once did.