George Saunders is brilliantly hilarious in this story collection that satirizes our corporate culture. 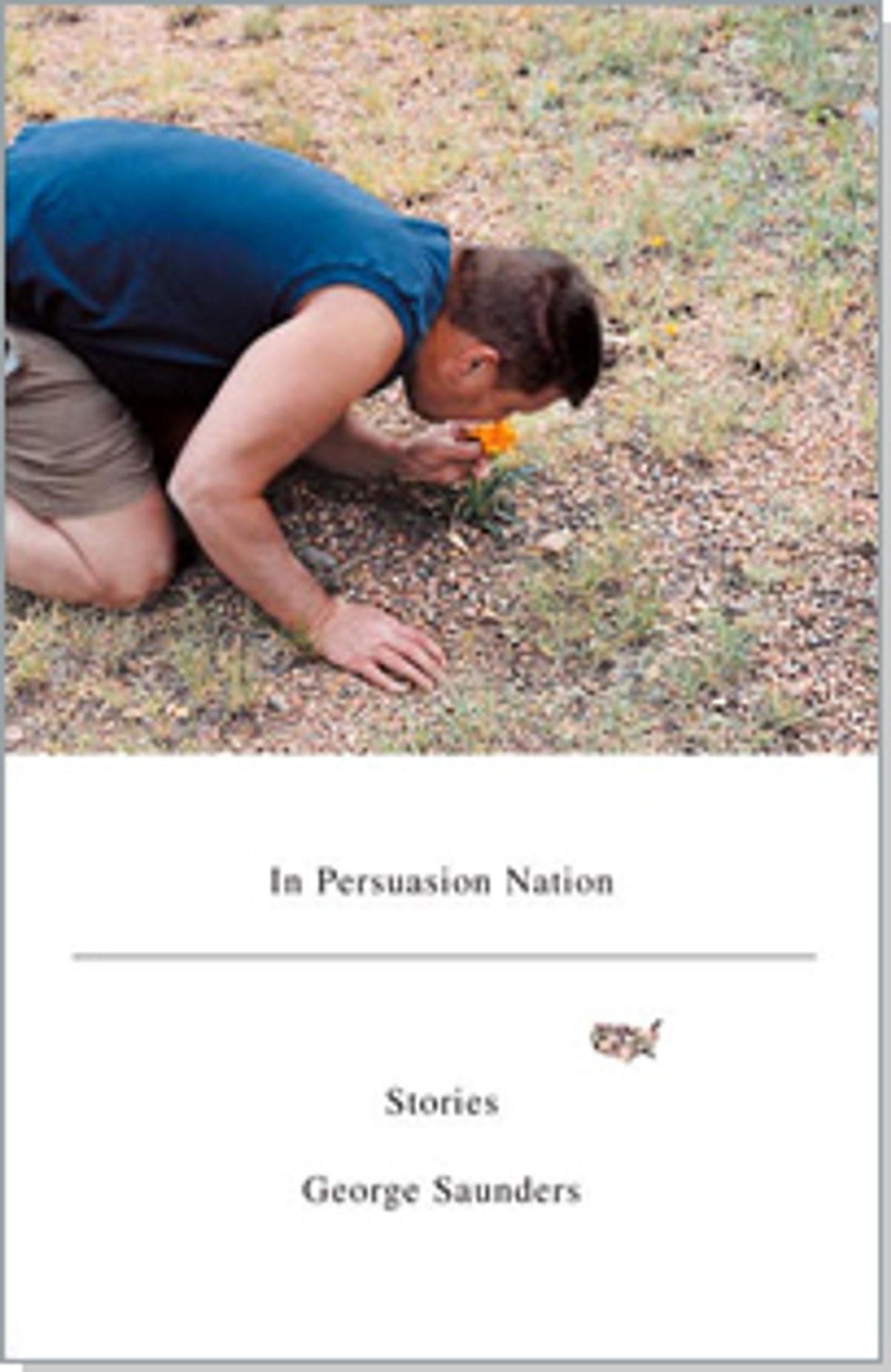 When he's firing on all cylinders, no one beats George Saunders at rendering the comic nightmare of life as a wage slave in contemporary America. Plenty of writers paint restrained, mournful portraits of lives of quiet desperation, of hopes strangled in the cradle, of doomed marriages, etc. And almost as many satirize the shoddy lies and outrageously flimsy rationalizations of our corporate masters when they're pitching their products or cracking the whip. But only Saunders works in both registers at once, making us laugh at the lame, synthetic "dreams" mass culture offers to enrich our lives -- and making us ache for the decent, luckless people who are bamboozled into believing them.

In his latest collection, "In Persuasion Nation," Saunders writes as well as ever, but he often seems inclined to divide the two veins of his storytelling. A couple of the stories here -- "Christmas," "Bohemians" -- are relatively conventional. The characters are outsiders or losers -- an incompetent young roofer, a group of unpopular neighborhood kids -- who have fairly realistic introductions to injustice and human folly, and who usually wind up abashed by their own complicity or passivity. These are good stories, but I'm not sure who -- besides an editor of one of those safe, demure year's-best anthologies -- would find them exceptionally memorable.

Other stories in "In Persuasion Nation" don't carry much emotional weight. "I CAN SPEAK!TM" takes the form of a long, impassioned letter written to a dissatisfied purchaser of the titular product -- a kind of latex mask with speakers that, when worn by an infant, simulates adult speech. The letter writer tries to convince the customer of the merits of I CAN SPEAK!TM by suggesting it might fend off early, "possibly lifelong psychological damage ... Now, am I saying that your Derek runs the risk of feeling bad about himself as a grown up because as a baby he felt he didn't know how to talk very good? It is not for me to say, Mrs. Faniglia, I am only in Sales. But I will say I am certainly not taking any chances with Billy."

Allusions to the letter writer's anxieties about having to refund yet another sorely needed commission leak through here and there, but this is basically a humor piece about the absurdity of the exotic gear sold to parents of young children. Another piece, "My Amendment," also in letter form, implores a newspaper editorialist to expand his denunciations of same-sex marriage to include "samish-sex" marriages, in which the male partner is too effeminate and the female too butch. "Adams" is a first-person rant by a man whose imagination runs amok on the subject of the threat posed to his family by an upstairs neighbor, leading him to extreme acts of preemptive revenge. The political points of some of these less nuanced stories can seem a bit too firmly driven home.

Still, "In Persuasion Nation" has enough samples of Saunders at his best to make the book well worth reading. In some cases -- "The Red Bow" particularly -- the proximity of Saunders' more satirical writing lends the less outrageous stories a subtle bite. "Bow" is narrated by a man whose young daughter has been killed by mysteriously "infected" dogs. The tragedy galvanizes his layabout uncle, who launches a campaign to find and exterminate any other infected animals. The uncle gets carried away, printing up fliers ("Fight the Outrage") and using the dead child's hair bow as a symbol, only the bow keeps getting bigger and redder as the massacre extends to every pet in the area and leads to the issuing of "guidelines on how to handle individuals who, for whatever reason, felt it useful to undercut our efforts." OK, the political subtext of that one is pretty clear, too, but the horror of the child's death isn't diminished or sidelined by it.

Saunders has a peculiar relationship to consumer culture; he clearly finds it appalling, but he's so good at mimicking it that his parodies hover between scalding satire and a strange, vamping fondness. In "Jon," a group of teenagers, raised in a sealed environment with a creepy science-fiction device installed in their heads, exist only to test products and marketing campaigns. Their emotional lives are so synced to the ads feeding into their brains that they can't talk about love without reminding each other of "that RE/MAX one where the redhead kid falls asleep holding that Teddy bear rescued from the trash, the bear comes alive and winks, and the announcer goes, Home is the place where you find yourself suddenly no longer longing for home."

Even those kids who break free and opt to have their "gargadisk" removed are at risk of winding up able to communicate only in a gush of fragmented ad copy. The narrator's pregnant girlfriend gets out, but when they meet up later, she says things like "The suspense of waiting is over and this year's Taurus far exceeds expectations already high in this humble farming community." Saunders is so facile with this kind of pasteurized cliché that it's a little scary.

The title story in the collection, a trippy fantasia set in the world of TV commercial characters and brand mascots, is a splendid example of how Saunders reshapes the banality of mass commercial culture by zeroing in on its atavistic undercurrents. The characters -- a man whose fiancée leaves him for a Twinkie; an orange assaulted in a tavern by a "Slap-of-Wack bar" laying claims to superior nutritional value; a teenager whose grandparents dismember him for showing insufficient enthusiasm for Doritos -- are the walking wounded of the angry, smart-alecky and triumphalist tone of contemporary advertising. They mount a briefly effective insurgency, but in the end, all that's left of them is a polar bear (doomed to be axed over and over again by an Eskimo in a skirmish over Cheetos) who dares to question his fate.

The weird thing about this weird story is that the polar bear's existential crisis over the meaning of his own life and the possibility of throwing off his mental shackles is actually quite moving. ("Don't be so negative," he's told. "Try to be a productive member of the team.") Of course, the story is also a parable about late capitalism and its Orwellian ability to convince us that it's the only conceivable way for the world to run. But through the alchemy of Saunders' art, the plight of a polar bear who is helplessly and repeatedly stricken with an overpowering desire for cheese-flavored snack puffs feels more poignant than the usual run of realistic fiction about working-class malaise.

How does Saunders pull this off? It's partly because he's so funny. The ink-black humor in his fiction is far better suited to writing about life on the losing end of the American dream than is the grave, emotionally constricted, Hemingway-esque style traditionally used by literary authors. There's always been a touch of condescension in the solemnity of Kmart realism. A certain savage, downbeat wit is sometimes the only thing that gets people through a shift at the telemarketing call center, and Saunders gives the distinct impression that he's needed it often enough himself.

What's more, Saunders has the staccato rhythms of water-cooler vernacular down cold. "Tuesday morning Jillian from Disasters calls," goes the first line of "CommComm," the last story in this collection and one of the most effective. The narrator, who does P.R. for a dwindling Air Force base, shelters the ghosts of his parents at home. (They died during a violent home invasion the narrator refers to as "the night of the Latvians.") "They did not do that because they was Latvians," his father's specter explains magnanimously. "They did it because they had poverty and anger."

Guilt-stricken, the narrator describes his own actions that night: "Did I call, say I'd be late, say I might not be back at all? No I did not. Next morning I came home, found the house taped off. In terms of the body locations, the cops didn't use chalk. There was just a piece of loose-leaf on the stairs labeled 'Deceased Female' and the one on the kitchen floor labeled 'Deceased Male.'" Those sheets of "loose-leaf" speak volumes -- of a slapdash, second-class world where ordinary, hardworking people don't rate someone getting down on their knees and carefully outlining the hole their absence has left behind. George Saunders, though: He always uses the chalk.