He really was a Fox News Democrat

The numbers show Lieberman had a Fox habit, and kicked it cold turkey when he faced a primary challenge from the left. 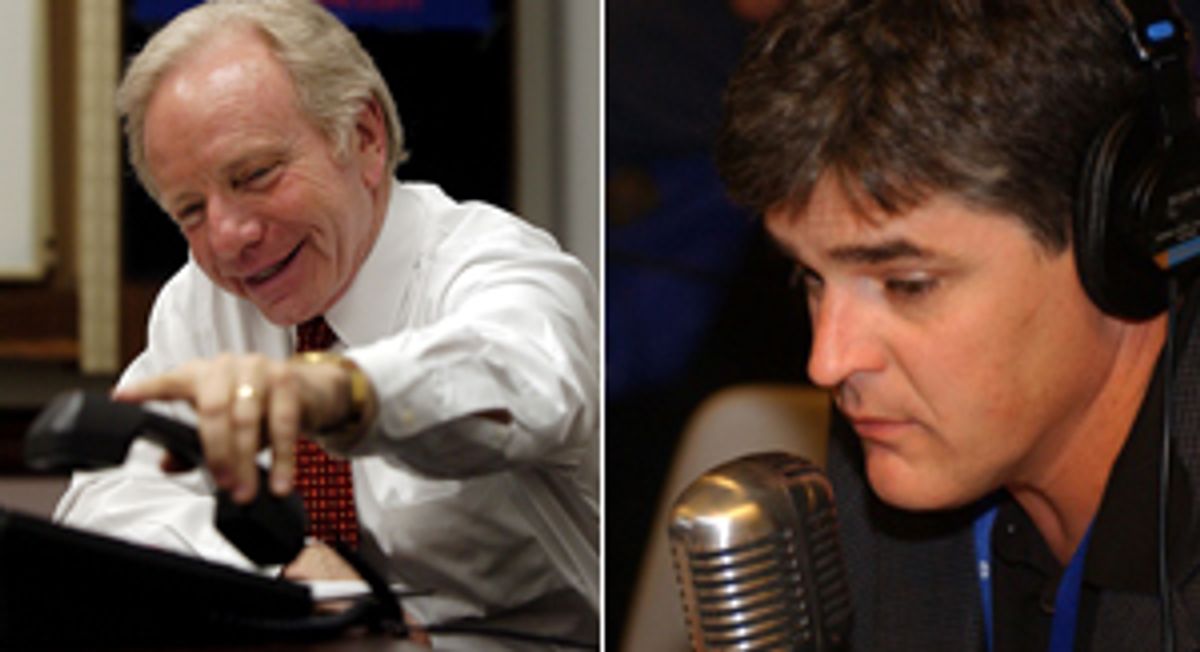 The bad news keeps coming for Joe Lieberman. A Quinnipiac University poll released Thursday showed that challenger Ned Lamont has widened his lead over the incumbent in the Connecticut Democratic Senate primary to 13 points. Lamont, until just months ago a little-known Greenwich businessman, had first surged into the lead in the previous poll, released July 20.

Lamont seems to have gained traction with voters after his performance in a July 6 debate with Lieberman. The political neophyte traded barbs with the three-term senator on live television and didn't embarrass himself. Lamont, in fact, got off the most memorable line of the debate, snapping at Lieberman, "This is not Fox News, sir."

With that applause-getting line, Lamont echoed the complaints of the liberal blogosphere and much of the Democratic base. They have long accused Lieberman of having undue affection for the Fox cable news network and its conservative talk show hosts. But does this grievance have any basis in reality?

The numbers indicate that it does -- and they also seem to indicate that someone in the Lieberman campaign, perhaps Lieberman himself, decided his Fox appearances were a political liability. A review of transcripts from the LexisNexis database shows that in the eight months since Nov. 30, 2005, when he appeared on "Hannity and Colmes," Lieberman has been absent from Fox News. By contrast, in the previous eight months, counting that Nov. 30, appearance, Lieberman was on Fox four times. And in his most recent primary, the 2004 race for the Democratic presidential nomination, Lieberman made 25 appearances during the 13 months he was officially running, from Jan. 13, 2003, to Feb. 3, 2004, for an average of roughly one appearance every two weeks.

That last appearance in November 2005 appears to coincide with the events that set Lamont's candidacy in motion. The day before Lieberman appeared on "Hannity and Colmes," he wrote an Op-Ed for the Wall Street Journal, titled "Our Troops Must Stay." In that piece, Lieberman went after some of his fellow Democrats for their opposition to the war in Iraq, writing, "I am disappointed by Democrats who are more focused on how President Bush took America into the war in Iraq almost three years ago, and Republicans who are more worried about whether the war will bring them down in next November's elections, than they are concerned about how we continue the progress in Iraq in the months and years ahead." Lieberman received acclaim from many in the Republican Party, and the Bush administration, for his words. Just days later, Democratic activists began to talk in the local and national press about the possibility of organizing a primary challenge to Lieberman.

On Dec. 1, an article in the Hartford Courant reported that Tom Matzzie, the Washington director of MoveOn.org, which counts 50,000 members in Connecticut, was saying that "if his members ask, his group would back a Democratic challenger to Lieberman. Matzzie was in New Haven last month, and found "the No. 1 question people asked me was, 'What are we going to do about Joe Lieberman?'" And on Dec. 10, the New York Times reported that James Dean, brother of Howard Dean, the chairman of the Democratic National Committee, was collecting signatures through his own group, Democracy for America, for a letter criticizing the senator.

Lieberman has not been on Fox since. Scott Overland, deputy press secretary for Lieberman's campaign, denies that the campaign has made a decision to avoid Fox in particular.

"We're just trying to keep television and radio as local as possible and keep our media attention focused on Connecticut," Overland said. "Right now, we are focused 100 percent on in-state press. In a campaign capacity we haven't done any national interviews, as we are 100 percent focused on staying in Connecticut and speaking to the people of Connecticut and winning the primary."

Salon found, however, that Lieberman has been doing national interviews related to the campaign, in both television and the print press. As recently as July 3, Lieberman appeared on CNN's "Situation Room" for an interview with John King about the campaign. He has also given interviews to the Associated Press and to the Washington Post's David Broder, and has appeared on CNN in a non-campaign setting on two other occasions, as well as in non-campaign settings once on CBS and once on ABC.

Responding to a follow-up question from Salon about the interviews with the AP and Broder, Overland said, "Well, the one with David Broder, I believe that was in his Washington office, his Senate office. The AP, I think that was with Susan Haigh, the Connecticut reporter, and certainly I think that the AP is not comparable to a network news interview just because it's a wire service. I think that, going to your original question, about why we haven't gone on Fox News and Hannity, I guess that my original answer about not being on national news was referring mostly to national television programs. I'm not going to go on the record saying 100 percent that we haven't done any national papers, because I know for a fact that we have talked to reporters."

Kenneth Dautrich, a professor of political science at the University of Connecticut, says Overland's explanation could be accurate.

"[Lieberman] probably needs to schedule his time wisely, and ... I think that he knows as well as anyone that people who vote in the Democratic primary don't watch Fox News. Those who tend to be Democratic tend to be more liberal, and that's not the profile of Fox News."

However, when Salon shared the results of its research with Dautrich, he commented, "From the data that you've got it does seem that he has made a strategic move not to appear on Fox. Those numbers are pretty powerful."

Pollster Scott Rasmussen says there may be good reason for that move.

"We haven't done anything in Connecticut in particular or in this cycle, but over the past several years we've polled many times, and I'll put it in a broader context: Republicans tend to think that Fox News is 'fair and balanced,' and Democrats see it as very biased and out to help Republicans try to win campaigns. It is the mirror image of what people see on CNN, and it has to be put in the context of people don't look at any news outlet these days as unbiased."

This is not the first time Lieberman has seemed to avoid a news outlet perceived as conservative by Democrats.

In an interview widely publicized on liberal blogs, Lieberman appeared Feb. 11 of this year on Sean Hannity's radio show. Reminded of his pledge to appear on the show once a month, and asked by Hannity if he wanted an endorsement from the controversial radio host, Lieberman laughed, and replied, "Well, you know, it's good of you to ask me in private like this. ... Let me just say, I appreciate your friendship, and I appreciate your support. Really. ... Look, I've always gotten elected by people from all parties. Now if there's a Democratic primary against me, which there might be, I might ask you to come in and endorse my opponent."

As noted by Mike Stark, who runs the liberal blog Calling All Wingnuts, Lieberman has since broken his pledge to Hannity and has not appeared again on the show.

It is a trend, Dautrich believes, that may end as soon as Aug. 8, when Lieberman faces Lamont in the primary.

"My guess," Dautrich says, "is that once this primary's over you'll see him back on Fox real quickly because there's a weak Republican candidate who's running, independent voters are not averse to Fox, and the Democrats are going to be going with Lamont. The nature of the voters in the general election would suggest that he will do well by going back to Fox."