Republican brutality against Jack Murtha, especially by politicians who once praised him, highlights the GOP's desperation on Iraq. 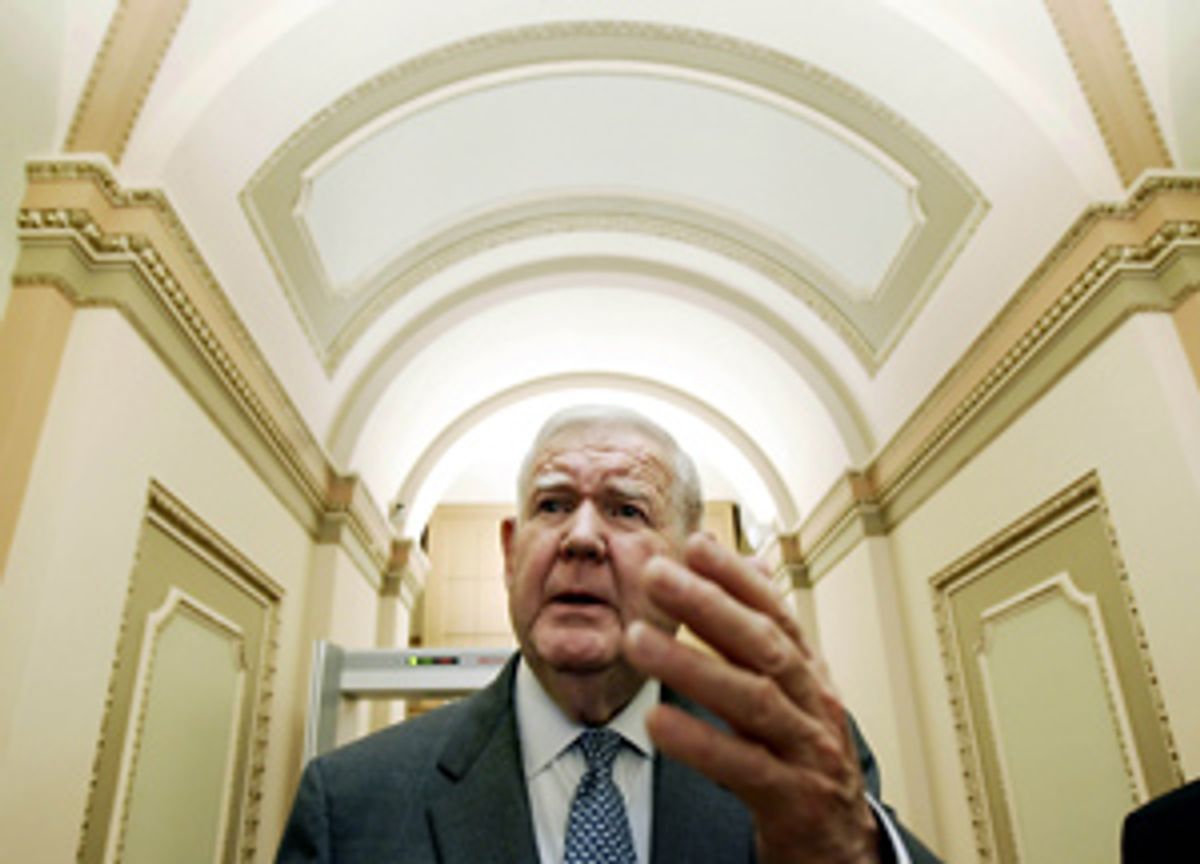 For a political operative of such skill and smarts, Karl Rove is surprisingly predictable. Since Rove entered the White House and took control of the Republican Party, there are two things he has done in every election. He goes directly after his adversary's greatest perceived strength -- and he reveals his game plan in advance.

As this year's midterm elections approach, threatening his party's majority in both houses and possibly leaving his boss the lamest of ducks, Rove remains on the same course he charted last winter. Indeed, he announced his plan of attack in January, when he told the Republican National Committee that the "failed resolve" of Democrats who seek to withdraw from Iraq is "worthy of public debate," and vowed that "this president and this party" would not allow America to "retreat before victory."

Around that time, Republican operatives began to set up Web sites and test themes that the party could use against the most formidable critic of the president's Iraq policy, and started to prepare the "Swift-boating" of Rep. John "Jack" Murtha, D-Pa., a highly decorated Marine veteran, once-enthusiastic supporter of the Iraq invasion, and one of the military's best friends on Capitol Hill -- who stunned the Bush administration in November 2005 when he called for a phased withdrawal from Iraq.

Those initial attacks on Murtha -- for supposedly failing to earn the medals he won as a volunteer in Vietnam -- fell flat. The Republicans could scarcely mount a serious campaign against him in his blue-collar Pennsylvania district, and didn't even bother to raise any real money for his GOP opponent in November. But last month, Rove went after Murtha directly in a speech to New Hampshire Republicans, accusing him of wanting to "cut and run" from Iraq. Murtha struck back hard, mocking Rove for talking tough while sitting on his "big fat backside" in an air-conditioned office as American kids fight and die in the desert heat.

Rove, one of many Vietnam "chicken hawks" now urging others to "stay the course" in Iraq, may have been incautious to engage Murtha directly. Yet while Murtha kicked his butt in that confrontation, and support for the president and the war keeps waning as conditions in Iraq continue to deteriorate, attacks on the maverick Democrat are intensifying again. The reason is not that Republicans suddenly believe they can beat him, but because he is out campaigning for Democratic congressional candidates all over the country, and serves as a powerful symbol of patriotic opposition to administration policy.

That is why Ann Coulter bestowed one of the most coveted badges of honor in contemporary America on Murtha in late June, when she called for his death. The Democratic vet, she said, is "the reason soldiers invented fragging," Vietnam-era slang for the crime of murdering a superior officer with a grenade. That is also why Rush Limbaugh and Sean Hannity lied about Murtha's comments on international perceptions of the United States, distorting his words to make him sound unpatriotic.

The latest shot at Murtha is a dubious "defamation" lawsuit brought against him by Staff Sgt. Frank Wuterich, a man whose name the congressman has never uttered. Wuterich is one of the Marines who may be implicated in an alleged massacre of civilians at Haditha, an incident under investigation by the Pentagon. Murtha warned of a coverup but never mentioned Wuterich. The lawyers who brought the lawsuit claim that they have nothing to do with the Republican Party, but it is curious indeed that they have chosen to sue Murtha alone, rather than Republican politicians who have made similar comments or media outlets that have reported preliminary findings in the Haditha probe. According to Glenn Greenwald, one of Wuterich's lawyers has promised to add Republican defendants to the lawsuit -- which may serve as a test of who is really behind this meritless litigation.

And this week, the Republican National Committee launched a direct assault against Murtha on its Web site, featuring his "Democrat Cut-and-Run Tour of America" and a map of the United States flying little white flags. Slapped up on the site rather haphazardly in the form of an opposition research memo, the GOP hit piece is headlined "Rep. Murtha Wrong on Iraq" -- and then lists his votes in favor of military action against Saddam Hussein. It rakes him for voting like a Democrat against Bush's regressive tax cuts, and goes on to resurrect ancient news clippings about Murtha from the Abscam scandal more than two decades ago. (He turned down a bribe, testified against two other congressmen, and was cleared by the House Ethics Committee.) A measure of this dredging operation's desperation is its extensive use of quotations from Gary Ruskin, an ethics watchdog whose opinions of Republican legislators will never be seen on the GOP's Web site.

The would-be assassins of Murtha's character have short and convenient memories. To look back through the pages of the Republican and right-wing press is to find copious endorsements of the Pennsylvania Democrat as a tough, patriotic, bipartisan legislator. Consider the descriptions of Murtha in the Weekly Standard, home of the Iraq war's most fervent cheerleaders and house journal of the neoconservative hawks, in years past.

During the Clinton years, Standard writers referred to Murtha as a "plain-spoken" good guy who was "one of the most respected Democrats in the House." Before Bush took office, the magazine reported that Tom DeLay, then the House whip, had urged Vice President-elect Dick Cheney to cement his connections with the crusty legislator. "The first person you should call on Capitol Hill is Jack Murtha," DeLay told Cheney. The magazine praised him for being "conservative" and "pro-defense."

And in May 2004, the magazine published a long article by editor William Kristol and Robert Kagan, one of the leading neocon ideologues, that defended Murtha against certain partisan critics.

"Rep. John Murtha has been attacked by Republicans for insisting that we are unlikely to succeed in Iraq without a big increase in the number of troops," they wrote. "These attacks on Murtha are stupid, because he is absolutely right. The Pentagon continues to fiddle while Iraq burns."

Nothing has changed since then, of course, except that more of Iraq has burned, more Americans and many more Iraqis have been killed and wounded -- and one conservative, pro-defense congressman has admitted his error and tried to correct a terrible mistake. Those who once praised him and now cast doubt on his patriotism only disgrace themselves.