Will Ferrell, John C. Reilly and Sacha Baron Cohen burn up the track -- and the screen. 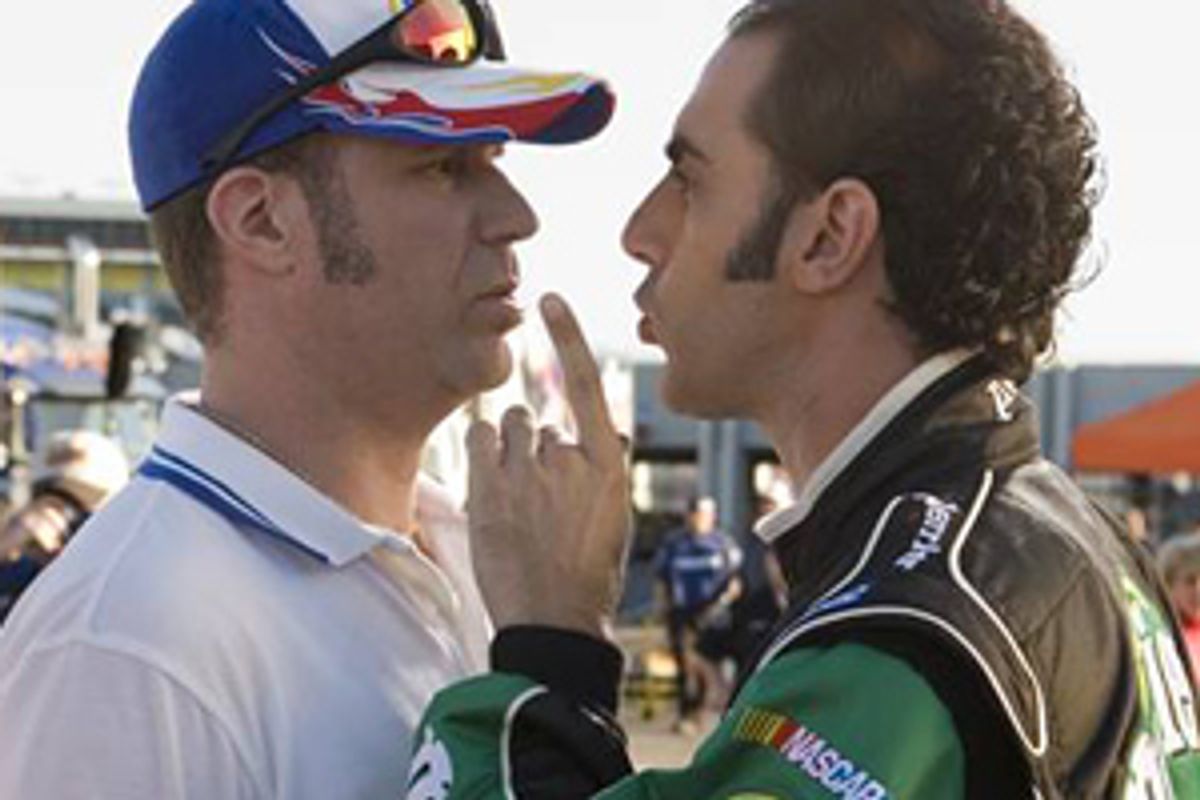 Will Ferrell has a knack for playing self-important boobs who get ahead in the world by sheer bluster, and the fictional NASCAR champ he plays in "Talladega Nights: The Ballad of Ricky Bobby" may be the most inflated of them all. When Ferrell's Ricky Bobby boasts to an interviewer, "I wake up in the morning and I piss excellence," the not-so-subtle subtext is that he's a winner with juice to spare. The line by itself is funny, but as Ferrell delivers it it's even funnier: Even though Ricky Bobby comports himself with a manly swagger, his eyes look perpetually perplexed. This is the kind of hubris you could find only in a naif, a creature who's certain of his place in the world simply because he has no idea just how big the world is.

Watching Ricky Bobby get taken down a peg is part of the fun of "Talladega Nights," but that doesn't mean you don't want to see him clamber back on top again. And that's what "Talladega Nights" gives us. Essentially a string of gags loosely looped together, a set of absurd situations for the actors to clown their way through, "Talladega Nights" is an affable entertainment, both a celebration and a satire of lowbrow pleasures: The picture takes place in the chaw-chomping world of NASCAR racing, and at one point two characters reflect on the most memorable features of their wedding, a performance by a Styx tribute band and a fountain made of nachos.

The picture was directed by Adam McKay, who also gave us the goofy, pleasurable hit "Anchorman: The Legend of Ron Burgundy." (As with "Anchorman," McKay and Ferrell wrote the script together.) "Talladega Nights" doesn't feel as fresh as "Anchorman" did; you can hear it grinding its gears a bit, bearing the strain of being the second in a franchise. And like most contemporary comedies, it could benefit from some streamlining: It drags a bit, and shaving off just 10 minutes would have helped.

But even if the picture is only mildly amusing most of the time, there are enough moments of inspired lunacy to keep it moving. The story opens with Ricky Bobby being born in the back seat of his dad's sassy Chevelle. (Ricky's mom is played by the intimidatingly funny Jane Lynch. Gary Cole is his ne'er-do-well pop, an absentee dad who shows up years later in the same python cowboy boots and Sansabelts, and he pulls off a great physical bit: Instead of entering his car the uncool way, via the door, he prefers to slither in through the open window.) Ricky Bobby's motto, from childhood, is "I wanna go fast," and eventually, he does: He gets his big break when the lazy driver he's crewing for -- played by McKay -- stops mid-race for a chicken sandwich; Ricky Bobby suits up, takes the wheel and finishes first. Before long, he's autographing breasts and the occasional baby's head.

A generous soul, sort of, Ricky Bobby creates a supporting role in his dazzling universe for his longtime best friend, Cal Naughton Jr. (John C. Reilly). Ricky Bobby's life is perfect: He's got a tacky mansion, a perky, shallow wife (played by Leslie Bibb) and two bratty sons (their names are Walker and Texas Ranger, and they're played by Houston Tumlin and Grayson Russell). But from the shores of France comes a formidable challenger in the form of suave hotshot Jean Girard (Sacha Baron Cohen), a gay Formula 1 champ (he pronounces it "Formula Euurh"). Ricky Bobby's confident masculinity is rattled.

Even though Ferrell is playing a character with a gas-guzzling ego, he doesn't overwhelm the picture: In fact, more often than not, he sits back and lets himself be the reaction-shot guy, allowing the other actors to bounce their jokes off him. It's a generous approach, especially for a comic lead, and it gives the movie a loose-limbed, easygoing feel. Reilly, in particular, is a wonderful comic actor, and he vests even the dumbest lines with a nice, deadpan zing. (When Ricky Bobby nestles behind the wheel before that first race, Cal's pep talk takes the form of a dim-bulb, decidedly non-p.c. non sequitur: "Remember that time we got kicked out of biology for playing matchbox cars? Well, who's retarded now!")

I'm wary of any picture in which a Southern accent is used as shorthand for stupidity or redneck tendencies. Then again, this is a movie where the challenger to Ricky Bobby's supremacy is a Frenchman whose accent is so exaggerated it sounds like a speech impediment, so it probably doesn't pay to get too hung up on the symbolic meaning of regional speech. Besides, Cohen, with his phony French, is by far the funniest thing in the movie. I kept wishing he'd get more screen time.

At least he has a wonderful entrance: Ricky Bobby and his crew are hanging out at some dive bar, talking guy talk, when suddenly, the REO Speedwagon-style drivel pouring out of the jukebox stops and the übersophisticated tootling of Charlie Parker's "Segment" fills the air. The guys act as if alien spores had invaded their brains: "I want this music outta my head now," proclaims one, as he desperately clutches his cranium. The guys look toward the jukebox to see who's responsible for this egregious insult to their masculinity, and there's Cohen's Girard, dressed in a dark suit that would send Pierre Cardin into spasms of jealousy, his sideburns groomed into perfect devil's triangles.

Cohen is best known as the tracksuit-clad prankster Ali G, but here, he's all slithery comic elegance. His mangled Franglish is a peculiar and wonderful invention: He pronounces Ricky's name "Recky Berrbee," as if his mouth were filled with marbles. He sips a beverage from a tiny cup as he maneuvers his speeding race car around the track, and curses when Ricky's car causes him to swerve: "You have speeled my macchiatto!" And although the movie contains numerous silly gay jokes, it's hard to see the humor as homophobic, considering Girard is infinitely more sophisticated, smarter and better looking than Ricky Bobby and his friends are, and they all know it. Girard is the movie's one true gentleman: His savoir faire is everywhere.