Secular Arabs like Druze leader Walid Jumblatt worry that the Israeli invasion will push Lebanon into the arms of the fanatics. 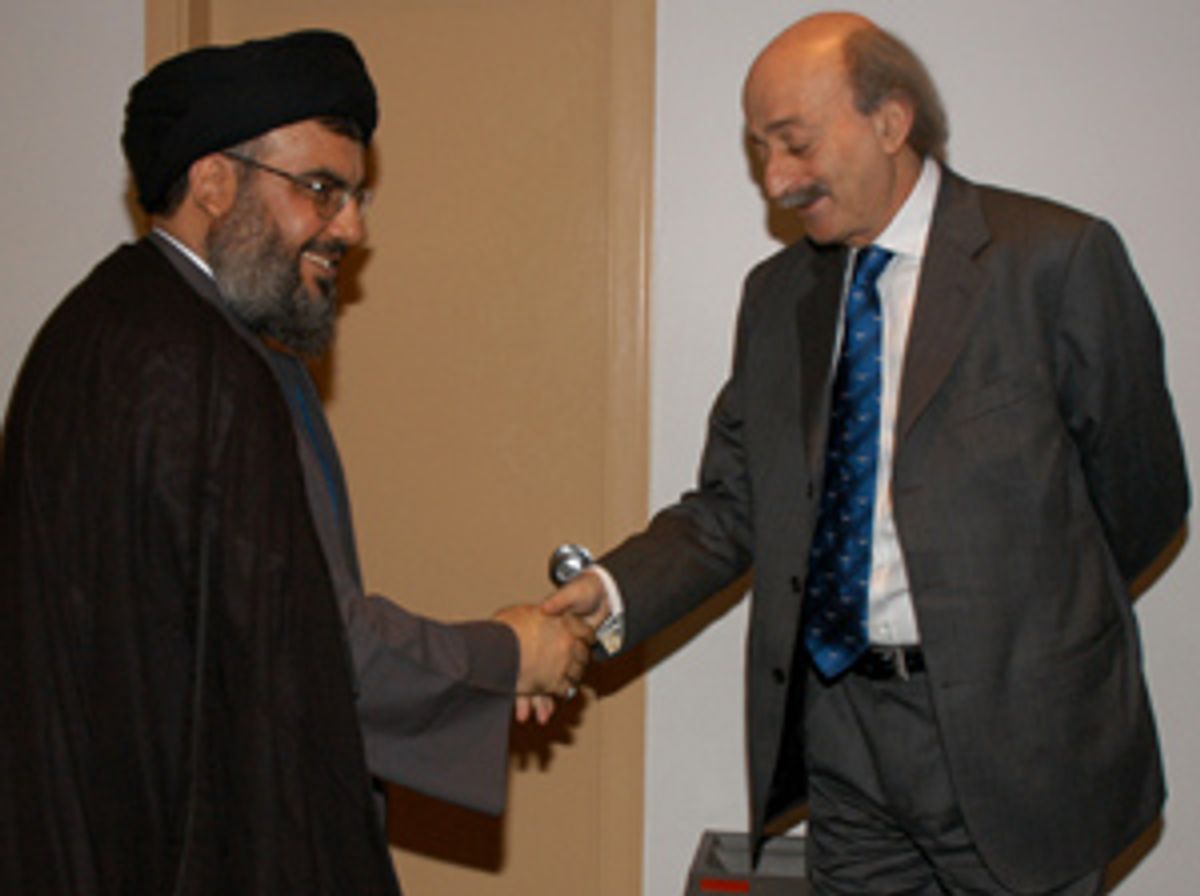 Walid Jumblatt is in a funk. The leader of Lebanon's Druze sect was never an upbeat kind of guy at the best of times. Even during the height of Lebanon's Cedar Revolution, which he helped to engineer, the Sorbonne-educated Marty Feldman look-alike wore an expression of eternal exasperation. And that was after helping kick the Syrians out of Lebanon.

These days he's really down. Jumblatt is haunted by dark visions of what Lebanon will become once Israel has finished bombing his country to smithereens.

Seated inside his 18th century palace, hung with portraits of his late father, Kamal, an Arab socialist with a fondness for Buddhist philosophy, Jumblatt junior conceded defeat.

"The fanatics have won the day," he said gloomily, as we drank sangria in a vaulted stone room lined with Oriental pillows. "The Israelis are arrogant and won't admit they've lost, but they have. Hezbollah can afford this tactic of burnt earth." "We're squeezed," he concluded, "between Karbala and Masada." Jumblatt allowed himself a slight smile for coining the expression and then sighed heavily. By invoking Karbala, the Iraqi city where the Shiite saint Hussein and his followers were massacred, Jumblatt was referring to the Shiite glorification of martyrdom. Masada, the hilltop fortress where ancient Israelites committed mass suicide rather than surrender to the Romans, symbolizes the Israeli penchant for viewing every fight as a fight to the death.

Physically, Jumblatt seems far removed from the current conflict. He fields a steady stream of phone calls, but he has been largely confined to his Chouf mountain redoubt for the past year and a half after receiving assassination threats. Most of the Chouf, which is southeast of Beirut, has been spared Israeli airstrikes. It's PSP territory -- the acronym for Jumblatt's Progressive Socialist Party -- and turbaned mullahs and bearded fighters are not welcome here. But Jumblatt is a political animal and he clearly sees which way the winds are blowing. His Druze stronghold is crawling with displaced Shiites, who have fled the fighting further south. And Hezbollah leader Hassan Nasrallah has been hinting that leaders like Jumblatt will pay the price for not backing the cleric's fight against Israel.

"They have taken the whole country hostage," Jumblatt said, referring to Hezbollah and its allies, Syria and Iran. "They have succeeded in stealing our dreams of a year and a half ago." That's when Lebanon's liberal, independence movement, known as the March 14th forces, demanded a Lebanon free of Syrian occupation. And then the man who helped lead the Beirut Spring went quiet. His phone, for once, went quiet too. The silence grew painful.

March 14, 2005, doesn't feel that long ago. That day, Jumblatt and his allies rallied a million Lebanese in downtown Beirut with their call for "freedom, sovereignty and independence." Standing behind a bulletproof shield, Jumblatt, dressed in his usual stovepipe jeans, gave one of the most rousing speeches of the day with his passionate attack against the Syrian "dictator." It was a heady moment for all.

But largely absent from the crowd that March 14th were Lebanon's Shiites, who make up some 40 percent of the country. Hezbollah and its hundreds of thousands of followers, mainly the poor and disaffected who have benefited from Hezbollah's largess, remained clearly in Syria's camp. Damascus, after all, had been one of Hezbollah's main patrons, helping to serve as a conduit for the thousands of Iranian missiles now stored in caves, bunkers and basements around Lebanon. That in turn gave the Shiites, who had long borne the brunt of Israel's many invasions into southern Lebanon, a sense of security. It also gave them a status and clout they had historically been denied by Lebanon's other large sects, like the Sunnis and the Christians.

After the June 2005 elections, the first elections relatively free of Syrian interference in 30 years, Lebanon's fragile pro-Western government pondered the challenge of how to deal with Hezbollah. Newly elected Prime Minister Fouad Siniora was under U.S. pressure to disarm the group. Jumblatt himself didn't seem especially concerned about Hezbollah's weapons just a year ago. He defended the group's right to fight for the Shebaa Farms, a disputed piece of land occupied by Israel. But many of his allies were worried. They knew that the presence of an independent armed militia accountable to Tehran and Damascus was going to be a problem for the new Lebanon. But how to disarm a powerful militia, with ties to Iran and Syria, given Lebanon's weak army and divided government? No one quite knew, but a series of national dialogues ensued.

Later that night, seated on his stone terrace, under the Chouf's starry skies, Jumblatt claimed he had told Washington to squeeze Syria harder if it wanted Lebanon's fragile new democracy to survive. But, as always, American officials didn't listen. Now the Syrian-Iranian-Hezbollah axis is on the rise, says Jumblatt, thanks to a series of American policy mishaps in Israel, Syria and Iraq. Lebanon is in shambles. And Arab moderates, as always, are the losers.

"Who are the liberals who will stay here now?" he asked morosely. "They will leave. We will have the fanatics ruling, not just in Lebanon, but in the whole Arab world."

Not everyone here is as pessimistic as Jumblatt, but most Lebanese liberals are angered and bewildered by the recent turn of events. Few can make sense of the U.S.-backed Israeli campaign to destroy a populist guerilla group militarily. "I know Hezbollah started the fight by capturing two Israeli soldiers," said 30-something business manager Howeida Saad, in her strappy T-shirt, "but did Israel have to go this far? Why not negotiate the return of captured soldiers, as Israel has in the past?"

"If a military solution was in order, why not attack Damascus or Tehran, Hezbollah's backers?" asked long-haired American University of Beirut graduate Tarek Zeid. "Why destroy Lebanon, the only free, pluralistic, entrepreneurial glimmer of hope in the Middle East?" he added. "Why bomb its glistening new airport, its recently built bridges and roads? ... Couldn't there have been some other way?"

The questions get repeated night after night, at dinner after dinner, in the few Beirut restaurants that dare to open these days. And most of my Lebanese acquaintances come up with the same answer -- because Israel hates Lebanon and America doesn't give a damn.

Oussama Safa heads the Lebanese Center for Policy Studies, a liberal think tank in a Beirut suburb. He finds the current military campaign tragic and ironic. He said the most likely victims are the Siniora government and its allies like Jumblatt, not Hezbollah.

"There used to be a joke that this is the 'Condi Rice government,'" he told me in his book-lined office. "It was born with very strong Arab and U.S. pressure."

But today, the "Condi Rice government" is under siege, by sea, land and air. It's set to run out of fuel to run its power stations in just under a week. There's almost no gasoline for cars or generators. The fuel crisis is so dire that the prestigious American University of Beirut hospital, which never closed during the 15-year civil war, is talking about the possibility of starting to discharge its patients.

Safa says the U.S. and Israel are destroying Lebanon in order to rebuild it, free of Hezbollah. But that's not going to work, said Safa. "I don't think we can recover."

And while Lebanon's weakened government staggers under the weight of the current assault, Hezbollah seems to flourish. Its rockets continue to rain down on Israel; its fighters keep Israel's crack army bogged down along the border; and its ever-present Al Manar TV station continues to beam speeches by Hassan Nasrallah, despite Israeli efforts to smash both the leader and his propaganda arm.

Around the Arab world, Hassan Nasrallah is being hailed as the new Saladin, the Muslim fighter who took Jerusalem back from the Crusaders. For hundreds of thousands of displaced Lebanese Shiites, deprived of their homes and possessions, traumatized by war and death, Hezbollah is the answer to their pain.

In Sidon, a wheelchair-bound refugee from the southern town of Srifa recounted how her convoy was strafed by the Israelis -- after the Israelis had ordered civilians to flee. Seven of her relatives died, she claimed.

"We were waving white flags," Zeinab Aita cried, "and they still shot us. They're barbarians. They have no respect for humanity." Aita then cursed the U.S. for supplying Israel with its bombs, pledged her two young sons to Hezbollah, and vowed she would fight with her own hands against the forces of evil.

For many Lebanese, these stories of grief and extremism are familiar ones. "Don't the Israelis and the Americans remember 1982?" asked a Lebanese colleague. That summer, Israeli troops invaded Lebanon to smash the Palestine Liberation Organization. Some 20,000 Lebanese and Palestinian civilians were killed and a year later Hezbollah was born in response to Israel's ongoing occupation. "It's like they never read their history," he said.

On a recent weekend, wealthy Lebanese who haven't yet fled the country did what the Lebanese have learned to do so well after years of civil war -- escape. At a private swimming club some five miles north of Beirut, women in gold lamé bikinis lounged on deck chairs, working on their tans, while their partners lazily crawled the length of the club's 100-meter pool. Waiters served cold bottles of Corona beer and chilled arugula salad. The war seemed very far away, until the sound of helicopter blades filled the air.

Two enormous choppers appeared on the horizon out at sea and flew straight over the beach club, as in a scene from "Apocalypse Now." One peeled away back out to sea and the second landed on the grounds of the American Embassy in the hills just above the club. Everyone in the pool stopped to watch the spectacle for just a moment and then returned to swimming laps. Assistant Secretary of State David Welch had just landed in Beirut on a diplomatic mission. But no one seemed to care. It's not like it would make a difference anyway. Lebanon's liberals know they're very much on their own.

Kate Seelye reports from Beirut for Public Radio International and the BBC. She received a Dupont Award in 2004 for her reporting on the war in Iraq.