At Ned Lamont headquarters, progressives bask in the triumph of their upstart candidate -- for the moment. 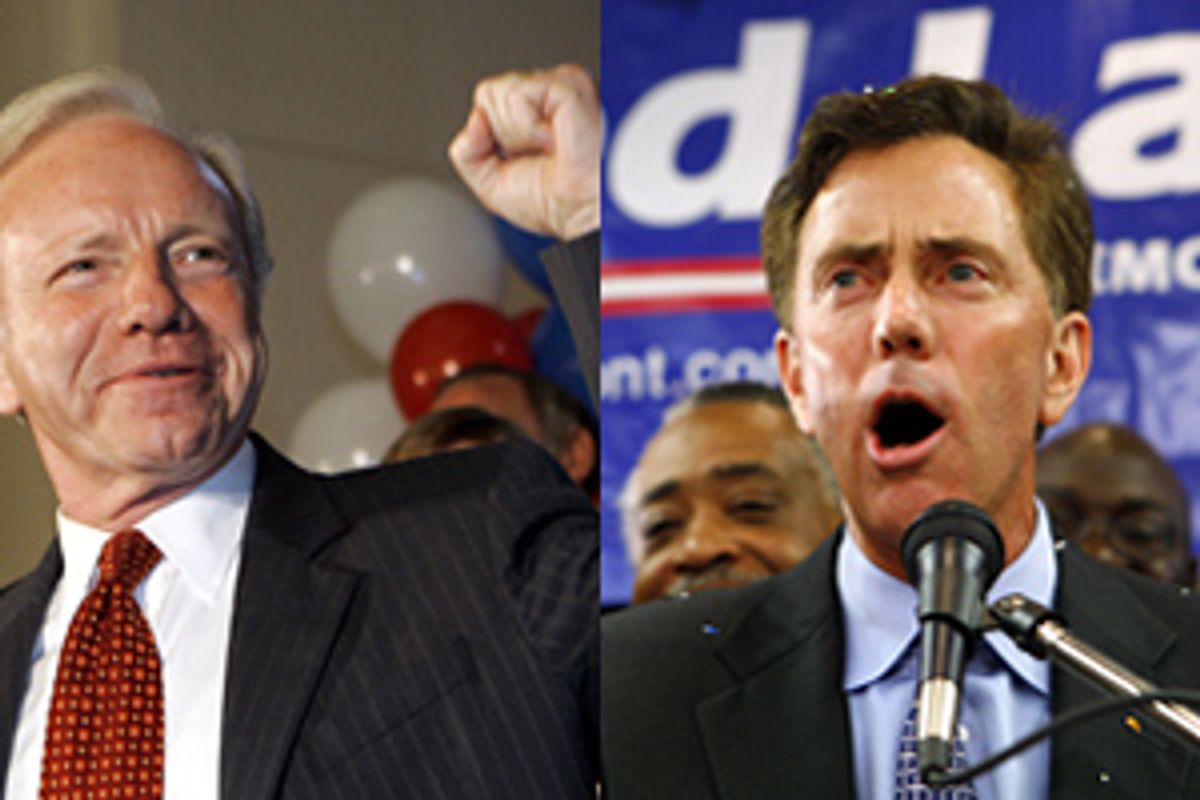 At a certain point, amid the chanting and confetti throwing and the unambiguous, surging happiness on the faces of Ned Lamont supporters late Tuesday night in a Meriden hotel, I saw a certain appetite. Like hikers who'd been lost in the mountains, these people were being led down to their first real meal in a long time. They were hungry and grateful and a little overwhelmed.

They had beaten (for the moment) incumbent U.S. Sen. Joseph Lieberman, and the banquet spread before them had been so long in coming it was almost too good to be true.

Whether it was peace activist Flo Woodiel or gay and lesbian activist Shawn Lang or Hartford arts leader Will K. Wilkins, they said the same thing to me, in nearly identical words.

"I haven't been on the winning side for a long time."

In the room were people who had believed in Ted Kennedy in 1980 and Jesse Jackson in 1988 and Jerry Brown in 1992 and Nomar Garciaparra in 2003. They had supported Democratic challengers against former Connecticut Gov. John Rowland and lost to him three times. They had lined up for Al Gore in 2000 and John Kerry in 2004, and what did they have to show for it?

New England is kind of set up to tell you that you have the wrong idea. The God of the Puritans doesn't like you very much. The Kennedys die or suffer disgrace. Bill Buckner can't field a slow roller. You should have dressed warmer (or cooler).

For this night, perhaps, these people had discovered a winning formula. Run against somebody who will hurt himself.

Because one thing seemed clear when Lamont wedged himself onstage with Rep. Maxine Waters, the Rev. Jesse Jackson and a throng of other Democrats who had supported him: the person to whom he owed the most was not there. Joe Lieberman was in Hartford.

Lamont is an independently wealthy businessman from Greenwich. At the dawn of 2006, nobody much had ever heard of him. In a matter of months he became famous as the only guy willing to run against Lieberman and willing, for that matter, to put up his own money to do it. Not a natural campaigner, he learned on the job, got better at answering questions and developed something like practiced ease in public situations.

He collected 146,000 votes on Tuesday and beat Lieberman by 10,000 votes and four percentage points. A solid win like that suggests that Lamont drew support from the mainstream of the party.

He still hasn't become a great candidate. I'm not sure he'd do that well in a normal field of hopefuls scrambling for an open seat, but that isn't the way this race worked. All Lamont had to do was be brave enough to get in the ring with Lieberman and argue a different position, primarily a position against Republican policies in Iraq. Lieberman did the rest, running a prickly and at times even haughty campaign that did not, until its final days, acknowledge the kind of trouble he had gotten himself into. Only then did the senator begin acting slightly less enthusiastic about the way the war is going and the way the White House is waging it.

As the night wore on, there was a persistent hope among Lamont supporters that Lieberman would now get out of the race. His fellow senator, Chris Dodd, was going to sit him down right away and have a tough talk, a number of politicians told me. They made it sound like an alcoholic "intervention," when the family finally gathers to tell Dad he has a drinking problem.

"He's not going anywhere," Connecticut's former governor and senator, Lowell Weicker Jr., muttered to me before the results were final: "He's not giving up." Weicker had surprised a lot of people by showing up in Meriden at the Lamont rally. "He's got plenty of money and nothing to lose and he wants his job back."

Weicker is in a unique position to know. Lieberman took the Senate job from him in 1988, and Weicker was instrumental in recruiting Lamont to run this year. He told me he will now form Independents for Lamont, to raise money and help the Democratic candidate in the much more complicated fight for votes in a general election.

Weicker was right, at least for the moment. Lieberman gave a speech that conceded only the numbers of the night. He had lost one balloting. He said it was halftime and Lamont was ahead with a whole second half to go. He denounced his opponent for "partisan politics" and for running on insults not ideas. The senator's close advisor, Lanny Davis, formerly of the Clinton White House, said it would be absurd for Lieberman to give up just because of what 100,000 people did on one day in August. There were a lot more Connecticut voters to be heard from.

True, and it's too early to get a full handle on what happened Tuesday, but even the Lieberman camp's spin -- this was a freak accomplishment on a hot summer day by a splinter group of radicals -- didn't hold up as well in the light of the numbers.

Turnout was the highest it has been for any primary in recent memory -- 43 percent instead of a more typical 25. Despite an enormous effort by both sides to court the African-American vote by using extensive visits and robo-calls from Waters, Jackson, the Rev. Al Sharpton (all for Lamont) and U.S. Reps. John Lewis and Eleanor Holmes Norton (for Lieberman), ad blitzes on black stations, and fliers and palm cards, turnout seemed lowest in predominantly black urban neighborhoods. It appeared late Tuesday that both sides had spent a lot of time and money on a very small handful of votes.

"It would have been more efficient and a little cheaper to buy each one of those voters a Chevrolet," one Lamont advisor said wryly.

Instead the Lamont team seemed to be pulling its strength from middle-class whites. "People who work for big companies invariably know a fellow worker in the Reserves," Lamont get-out-the-vote guy Peter Tercyak, a state representative, told me. "They see their co-worker go to Iraq and maybe get sent back for a second tour, and when they finally get home, they don't like what's happened to that person."

At first blush, the big turnout looks like good news for Lamont, who runs a distant second to Lieberman in polls predicting a general election that also includes Republican nominee Alan Schlesinger, an obscure figure beset by news stories about odd gambling behavior at Connecticut casinos.

With this kind of win under his belt, Lamont no longer looks like a boutique candidate fueled by support from a patchwork of niche voters. He got votes from lunch-pail Democrats, but he'll have to work hard to introduce himself to the rest of the Connecticut electorate.

"There will be a lot of people after tonight who will want to trot him all over the country as some kind of rock star, a symbol of a new kind of politics," said Weicker. "We need him to stay here and keep his nose to the grindstone."