Getting beyond our airport security obsession 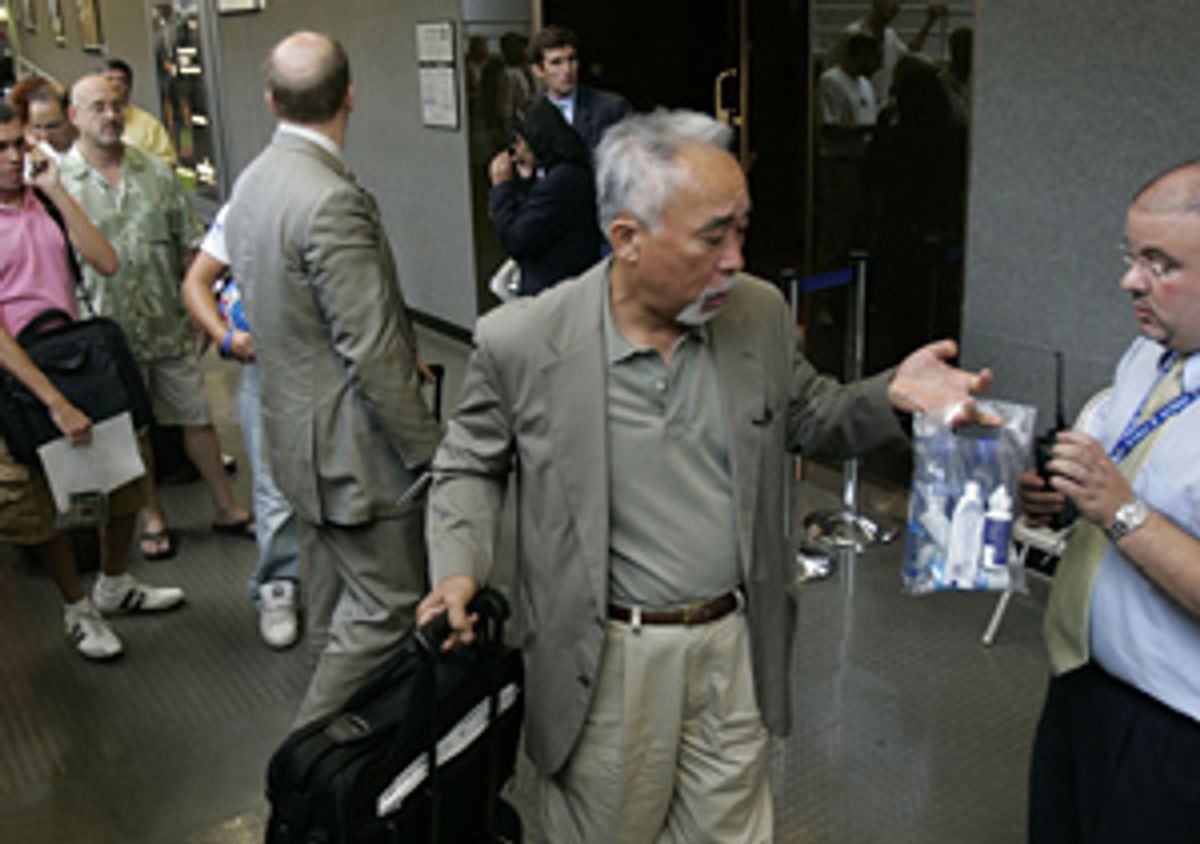 Terrorists intend to destroy several jumbo jets over the ocean using liquid explosives smuggled aboard in carry-on luggage. The plot is foiled in the nick of time by authorities.

August 2006? No, it's 1994, and the sinister plan, nicknamed "Oplan Bojinka," is under the direction of Ramzi Yousef and Khalid Sheikh Mohammed, a pair of terrorist conspirators hiding out in Manila, Philippines. Khalid would later lead the Sept. 11 attacks on New York and Washington. Yousef was already responsible for having organized the World Trade Center prelude bombing in 1993.

Oplan Bojinka is Arabic slang for "Operation Big Bang." It is funded by a renegade Saudi named Osama bin Laden and Riduan Isamuddin, an Indonesian operative who goes by the name Hambali.

Yousef grew up in Kuwait and became a master mixer of hard-to-detect liquid incendiaries. At one point he completed a successful Bojinka test run onboard a Philippine Airlines 747, killing a Japanese businessman with a small underseat explosion. Yousef himself, traveling with a forged Italian passport, smuggled the necessary components onto the airplane, including nitroglycerin hidden inside a converted bottle of contact lens solution.

Filipino police uncover the Bojinka plot from a Toshiba laptop in Yousef's Manila apartment, also used as an explosives lab, after they are called to the scene because of a chemical fire. It is two weeks before the attacks are scheduled to take place. Yousef flees to Pakistan and is arrested in Islamabad six weeks later by Pakistani and American intelligence officers.

According to the data in Yousef's computer, and later revealed during his trial, 11 jetliners, all belonging to U.S. airlines and all traveling between Asia and the United States, were to be targeted over a two-day period in January 1995. A team of operatives would carry aboard small but powerful explosive devices separated into various, seemingly innocuous components. Called "microbombs," the devices would employ Casio watches for timers and chemical stabilizers that resembled cotton balls. A pair of 9-volt batteries would provide power to detonators fashioned from light bulb filaments. The key explosive was a virtually undetectable form of liquid nitroglycerin. After assembly during flight, the bomb would be placed beneath the chair cushion, concealed by the underseat life preserver.

Each of the 11 chosen targets was a two-leg flight. The conspirators planned to disembark upon landing, with the bombs set to detonate hours later, after the planes were once again aloft. If successful, more than 3,000 people could have been killed.

All of this happened more than 11 years ago, providing more than ample notice that such a scheme was possible. Yet following revelations that a copycat Bojinka scheme was well under way in Britain, we're suddenly in a state of full-blown panic.

Based on what we know thus far, government investigators ought to be commended for unraveling this deadly scheme in time. Predictably and tragically, however, airports have been thrown into chaos not seen since the days just after Sept. 11. European and American security agencies have slammed down a sudden gantlet of restrictions resulting in massive delays and grave inconvenience for millions of passengers. An already devastated airline industry, along with countless of its customers, are once again going to suffer mightily.

There is no reason it has to be this way -- though few of us who've been writing about airport security issues over the past few years are terribly surprised. Half a decade after Sept. 11, having spent billions to upgrade air security, we're still needlessly obsessed with hobby knives and silverware, trying to thwart an attack that already happened and is all but certain never to happen again.

Is it any wonder that the specter of liquid explosives, the possibilities of which have been known to authorities for many years, should inspire a whole new round of reactionary panic and waste? It's too early, maybe, to be so cynical, but some of us have been waiting for the other shoe to drop, as it were, ever since Richard Reid's would-be sneaker bomb commenced the silly and apparently never-to-end X-raying of footwear at airports across America. I presume the new security paradigm will call for the permanent banning of toothpaste, shampoo and drinking water.

What we need to get through our terror-addled heads is this: It has been, and it will always be, relatively easy to smuggle a potentially deadly weapon onto an aircraft.

The easily concealable components of the Bojinka microbombs demonstrate the futility of trying to root out every possible terror tool. Knives can be improvised from almost anything. The same for bombs, flammable materials, and other instruments of destruction, large or small.

More than once in this magazine I've discussed the forgotten lessons of Bojinka. In laying out other fiendish scenarios, I once raised the possibility of terrorists sewing explosives into the living bodies of pets, which could then be shipped in a plane's cargo hold. The point was never to be gruesome but, rather, to illustrate the limitless tools saboteurs will always have at their disposal.

Ultimately, protecting commercial aircraft from terrorism is not the job of airport security, it's a job for police departments, federal law enforcement and intelligence agencies. The apparent plot at Heathrow Airport was not unraveled by the keen eye of a concourse screener; it was unraveled through careful investigation behind the scenes. By the time any attacker makes it to the metal detector, chances are it's already too late. There are too many ways to outwit that final line of defense.

No matter, here we go initiating yet another absurd crackdown to the detriment of millions of innocent travelers. Just as confiscating corkscrews didn't make us safer after Sept. 11, so banning liquids isn't going to make us safer now. All the while, the true weapon of mass destruction is the imagination and resilience of those who wish to harm us -- a fact we continue to ignore at our own peril.

Epilogue: Despite our administration's repeated assertion that the events of Sept. 11 were a complete surprise, the Bojinka plot was in fact a three-pronged scheme that included the possibility of using hijacked jetliners against several American landmarks and skyscrapers.

Today, Ramzi Yousef is incarcerated in a Colorado prison. Khalid Sheikh Mohammed is in U.S. government custody, his exact whereabouts a secret. Riduan Isamuddin, aka Hambali, is imprisoned in Jordan. He was implicated in the 2002 Bali, Indonesia, nightclub bombing. Osama bin Laden is at large.