Now that I'm observant, too, I question the senator's public shaming of Bill Clinton. 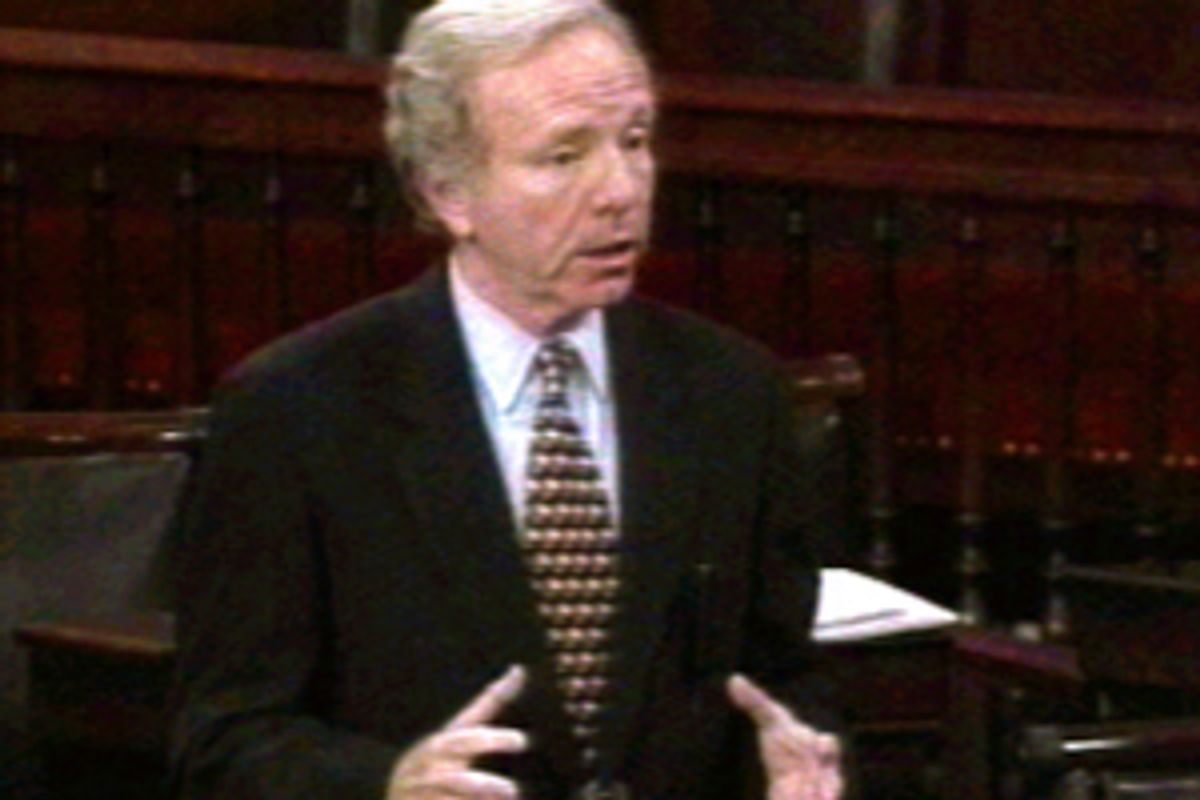 On the Jewish calendar, the 24 hours from sundown Tuesday to sundown Wednesday constituted the 15th day in the month of Av, a little-known holiday called Tu B'Av. Coming a week after Tisha B'Av, a day of mourning on which observant Jews neither eat nor drink, Tu B'Av is a minor but joyous celebration of love. People buy each other flowers on Tu B'Av. However, for the observant Jew who just lost the U.S. Senate primary in Connecticut, it's hard to see how it will ever be a joyous day again.

Like many of you, I first noticed Sen. Joseph Lieberman after that pompous, silly rebuke of President Clinton's behavior from the floor of the Senate in 1998. My thoughts at the time were twofold. As a Democrat, I resented Lieberman giving any cover to what looked and felt like an attempted coup. I also wondered what the heck a U.S. senator was doing trying to give anyone lessons in morality. Politics is not a profession that makes it easy for a person to stay on a straight moral path. The fact that I heard nothing from Lieberman when Newt Gingrich's personal life made news only confirmed my initial impression.

While my politics haven't changed much since 1998, my lifestyle sure has. Like the good senator, I too am now an observant Jew. Like Reb Yosef, I too put on tallit (the fringed prayer shawl) and tefillin (leather boxes worn on the arm and head) each morning and pray. Like Reb Yosef, I too try my best to live by Halakha, the more than 600 rules that make up the body of Jewish religious law.

The thing about trying to live by Halakha is that there are rules for everything, from tying your shoes to fasting on Yom Kippur to avoiding gossip, and on and on. One topic that is covered in Halakha is the proper way to rebuke someone, which is certainly what Sen. Lieberman did to Clinton eight years ago.

On the religious front, the topic is particularly timely, since at this time of year all Orthodox Jews are reading from the Book of D'varim (Deuteronomy) on Saturday mornings. D'varim is basically one long, loving rebuke from Moses to the people of Israel, given right before he died. Soon, we will enter the Jewish month of Elul, with its emphasis on introspection, and then, of course, the Days of Judgment, Rosh Hashanah and Yom Kippur.

So, in the spirit of the season, let's examine Lieberman's rebuke of Clinton's adulterous behavior in 1998. Below is a very short summary of how to rebuke someone.

You should have no self-interest in the rebuke

By this criterion, Lieberman obviously did not follow the Halakha. He was rewarded, and handsomely, for delivering this rebuke. He would otherwise have never been the first Jew, let alone the first observant Jew, to run on a national ticket. Surely he was aware that he was going to receive tremendous publicity and accolades from certain segments of the populace for scolding Clinton in public. He turned himself into a national figure in one bold stroke, massively increasing his influence on the various ongoing national debates. Perhaps he wasn't aware of the Halakha. I don't know, but based on this criterion alone -- self-interest -- I can't imagine that a posek (an authority qualified to give halakhic rulings) would have given him a psak Halakha (a halakhic ruling) allowing him to make that speech.

I can't tell. I know neither Lieberman nor Clinton personally. The Torah considers adultery to be a serious transgression for both Jews and gentiles. Adultery is not something someone living a Torah-based lifestyle takes lightly at all.

You must not humiliate the one you are rebuking

It's hard to imagine how much more Lieberman could have humiliated the president. His choice of a public forum was inappropriate and unnecessary. If Lieberman is truly a personal friend of Clinton's - and they have known each other nearly 40 years -- he should have taken him aside for a private chat and laid down the Law.

Now contrast Clinton's behavior as the rebukee. While not bound by Halakha, and surely in complete ignorance of its precepts, Clinton made clear, public tshuva (repentance). He stated clearly, in public: I have sinned. Whatever his motivations may have been, that's over and above what even an observant Jew would've been required to do.

Eight years later, Lieberman has received his own very public rebuke, this time by the voters of Connecticut. It's no fun, I'm sure. By first impressions, it seems like a very middah-kinneged-middah, or measure-for-measure, punishment for his mishandling of the 1998 public rebuke.

It also doesn't look as though he's handling this rebuke well. His non-concession concession speech Tuesday night was cloying and self-pitying. When rebuked, Clinton was a mensch. As of this writing, Lieberman is not behaving like a mensch.

Stephen Hirsch is a software developer in Passaic, N.J.