A nervous morning for air travelers, and this time, restrictions tighten around passengers' dopp kits. 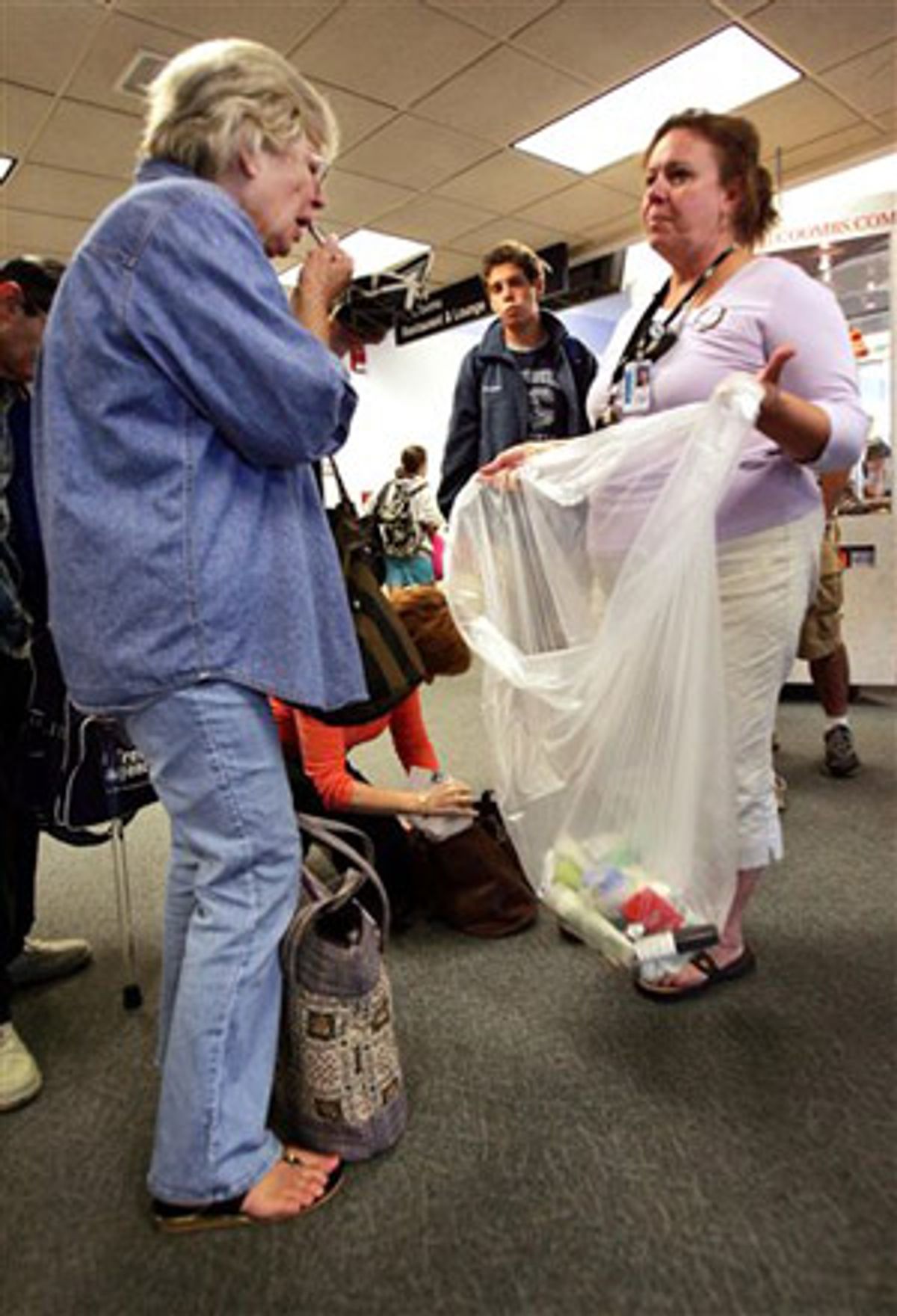 "I was going to carry my lotions and my liquid lipstick in my carry-on bag, but before I walked out the door I moved it all into my bag to be checked," said Eileen, a 55-year-old Atlanta resident riding the A train out to John F. Kennedy Airport, just hours after officials had broken up a reportedly imminent plot to bomb 20 airplanes en route from the U.K. to the United States using liquid explosives smuggled on in carry-on luggage. "I don't really know about the lipstick, you know?" continued Eileen, who'd been helping her son through a surgery and was returning home only to get on another plane to Greece on Friday. "If it were a stick, I would have kept it in the bag. But it's technically liquid. So I figured I'd play it safe."

Eileen wasn't the only traveler pondering the liquid versus solid properties of the toiletries in their bags on Thursday. Garbled word had already spread through news broadcasts and phone calls from friends that airport security was not allowing passengers to bring any liquids into plane cabins with them. But what, wondered some people, did "liquid" mean?

On the AirTrain shuttle at JFK were Judy and Steve, a couple who declined to give their last names but were traveling on business to Oakland, Calif. Like many of the other travelers, they carried only a plastic grocery bag alongside their larger luggage. Judy explained that they'd stowed their carry-ons inside the bigger suitcase, since they'd seen footage on television that morning of people walking through the airport with belongings in Ziploc bags. "I don't care about them looking through anything," said Judy, 32. "If I have to carry my tampons in a plastic bag, I'll carry my tampons in a plastic bag." Her husband, 34, added, "We've got nothing to hide. This is what it should be like every day. Since five years ago, we shouldn't take anything for granted."

Inside the United Airlines terminal, there were no nightmarish backed-up lines at security. Quickly made color photocopied signs hung at every security point declaring forbidden carry-on items, like mouthwash and perfume. Another had a big red circle in which were slashed out the silhouettes of ill-disguised Listerine, nail polish, and Poland Springs water bottles surrounded by the words "Non! Geen! Nao! Her! NO!"

In line to check luggage for her flight to Brazil, 28-year-old Maria-Claudia Cunha was crouched on the floor, a large suitcase and a small carry-on both open in front of her. She took a stick of deodorant from the smaller bag and applied it liberally before regretfully tossing it into the larger bag. Next came a bottle of perfume from the Gap. She spritzed it on her wrists, her neck, and down the front of her shirt before surrendering it to the more capacious bag. "I'm just doing everything they won't let me do for the next 12 hours," she said with a big laugh. She and two friends were finishing up their 10-day New York vacation. One of her companions, 29-year-old Ana Sousa, was staring at the contents of a small purple plastic makeup bag with a furrowed brow, removing and then replacing moisturizers and liquid foundation over and over again. She took out a red plastic tube of lipstick and held it up, asking me if it counted as a liquid. When I replied that I didn't know, she said "Forget it," and tossed everything -- lipstick, foundation, moisturizer and eyelash curler -- back into the makeup bag, which she then chucked into her check-in bag.

Just behind this liquid purge, a young family headed confidently toward the security gate, a bottle full of apple juice saucily holstered to a carry-on diaper bag. Hold on. Wasn't that verboten? "No, we called and asked before we came," explained Philip Ackerman, a teacher at Cardozo High School in Queens. He and his wife, Patty, and their 19-month-old son Gavin were headed for a vacation in Brussels. "They said that for the baby we can take juice, or formula if we needed it, which we don't, or breast milk," said Patty, a manager at Beth Israel Hospital. "Oh, and Benadryl, which parents should know."

Indeed, there were lots of things that neither parents nor children nor airport employees knew. At a Hudson News stand in the American terminal, a salesman shrugged his shoulders when asked whether a sealed bottle of water could get through security. "I don't think so," he said. Another customer cracked wise: "They're making you chug all your liquids before you get on the plane, then watching to see if you explode."

Jenny Fineman, a 25-year-old grad student, was surprised by the relative calm. "I expected it to be a complete mess and it's just not," she said. As a result, she had three hours to kill at the airport before her flight to Santa Domingo -- ample time to purge the liquids from her carry-ons. "I had to take out all my sunscreen," she said, "and my lipstick, and my Gap perfume." Again with the Gap perfume? "Their So Pink is great," she said with a shrug.

"Earlier this morning everyone was confused," explained a security guard who identified herself only as Jean. She'd been on duty since 3:30 a.m., before the particulars of the terror plot -- and of the liquid-free policies -- had been publicized. "Nobody knew nothing," said Jean, stopping to force a woman with a Diet Coke to toss it before moving toward security. "They checked their bags in, then they came through security with the liquids in their carry-on bags, and they were confused when we wouldn't let them through." Early travelers who had innocently bid adieu to their larger bags before transferring their sunscreen and perfume had reached the security gate and had to either chuck the contraband or check the carry-on bag, taking personal essentials like money, passport, and keys in a clear Ziploc bag. It was those images that had led so many to believe that the carry-on bags themselves were banned.

Directly outside the Finnair check-in, a young man was looking more panicked than anyone else in the terminal. His carry-on and larger suitcase were open next to each other, each disgorging what looked like a dozen pairs of sneakers. He worked messily, unearthing Gillette deodorant and some Axe Body Spray from the small bag and shoving them into the larger one. A number of what looked like pornographic DVDs and magazines with scantily clad women on them were falling out of his carry-on. When approached by this reporter, he desperately gathered the magazines, one of which seemed to read "Fuego." "No, no, no, no!" he said, holding up his hand to obscure a view of his baggage.

Just a few feet from him stood Fredna Tarikas, 49. She and her husband, who was parking the car, were about to leave for Estonia, via Finland, with their three kids: 12-year-old Aili, 13-year-old Kaia, and 16-year-old Rein. They'd flown to New York the day before from their native Winston-Salem, N.C., the first leg of a mission trip with Estonians for Christ. Trading one form of modern anxiety for another, Fredna said that she'd had to remove the hand sanitizer from her handbag.

At the airport shop on my way out, I handed the cashier a bottle of water and some much-needed ibuprofen for a headache. "You can't take this on the plane," she said, shaking her head and pointing at the water bottle. Then she held up the box of Advil Liqui-Gels. "Or these. See? There is liquid inside. No liquid on the planes."