Is the U.K. better than the U.S. at stopping terror?

Americans bust the hapless Seas of David gang. The British round up real terrorist rings. But experts say the U.K. arrests more extremists because more of them live on British soil. 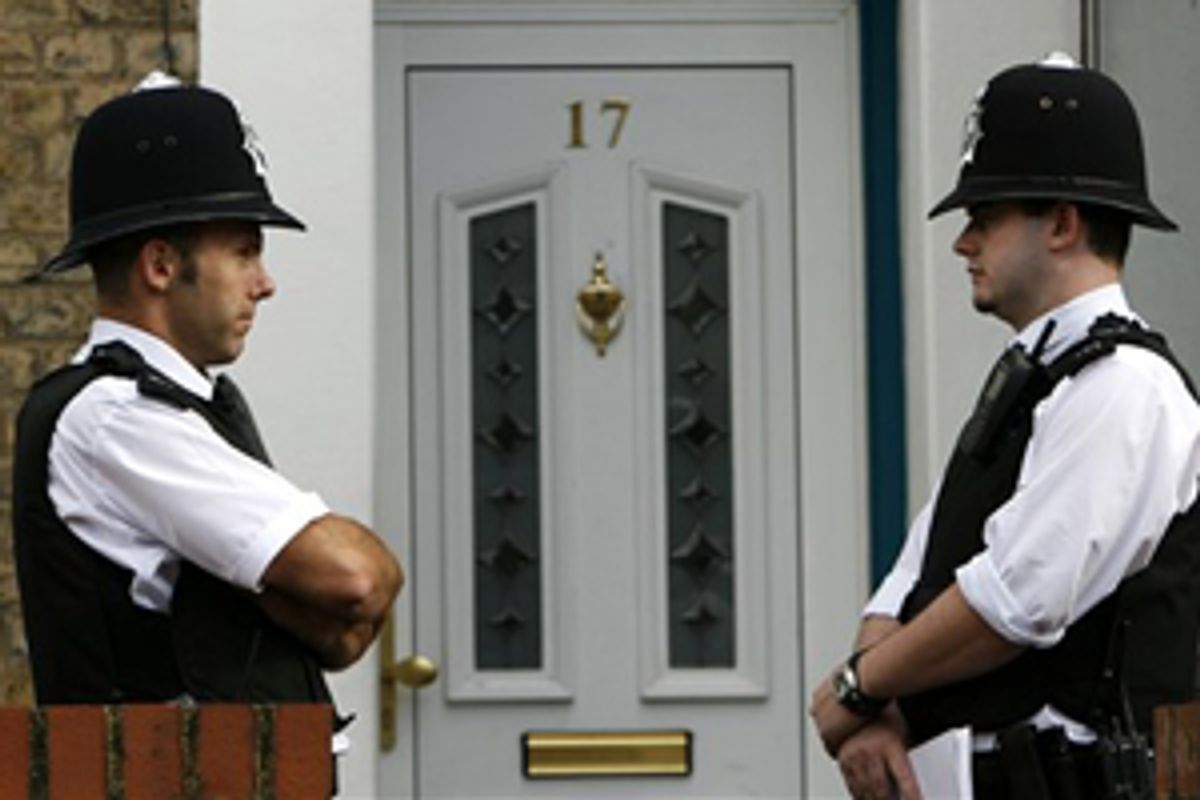 The bomb plot just foiled by British authorities was chilling not just because it was so audacious, but because it was so tangible. The 24 conspirators were apparently far enough along in their planning to destroy jetliners over the Atlantic, targeting American Airlines, Continental Airlines and United Airlines flights out of Heathrow with concoctions of liquid explosives, that some of them had airline schedule information in their possession when arrested.

Authorities suggested the perpetrators were just days away from making their attempt. Homeland Security Secretary Michael Chertoff called the operation "very sophisticated" and ready for execution. "They had accumulated the capability necessary and they were well on their way," he said in a Washington news conference. "This was not a circumstance where you had a handful of people sitting around coming up with dreamy ideas about terrorist plots."

Was Chertoff thinking of the Seas of David? At a late June press conference, Attorney General Alberto Gonzales made an equally solemn announcement about the terrorism arrests of seven Miami men who really did sound like a handful of dreamers. The government alleges that the members of a religious group, the Seas of David, who practiced martial arts in a one-story warehouse in the impoverished Liberty City neighborhood, wanted to blow up several buildings, including Chicago's Sears Tower. Before they could do any surveillance of their targets, however, they needed a government informant to get them a van -- and a camera, and some film. Before they could blow up the Sears Tower, they also needed the informant to buy them new shoes. Only John S. Pistole, deputy director of the FBI, allowed a sense of proportion to creep into the press conference. He called the supposed terror cult "more aspirational than operational."

While U.S. authorities have sometimes found themselves trumpeting the arrest of marginal types like the Seas of David and alleged dirty-bomber wannabe Jose Padilla, whose research into weaponry didn't get much further than Google, British authorities have furiously pursued what appear to be real, capable terrorists.

Sir Ian Blair, commissioner of the Metropolitan Police in London, reported last December that there had been a 75 percent increase in the antiterrorism operations carried out by his officers in the five months since the bombings in London on July 7, 2005. Between 2001 and those attacks, according to the New York Times, British law enforcement had already broken up seven or eight major terror plots. Since the attacks, there have been at least four more serious terror plots in that country, including the widely reported incident just weeks later when four suicide bombs failed to explode. In April 2006 alone, according to the Daily Telegraph, police were involved in 70 antiterrorism investigations, and officials said the pace was "accelerating." Of the more than 60 people facing trial on terrorism charges, two-thirds were arrested after the 2005 attacks.

Do those numbers mean the British are better at rooting out real terrorists than we are? Maybe not. Michael O'Hanlon, a senior fellow at the Brookings Institution think tank and a terror expert, has a simple explanation for why it seems like the Brits are arresting scarier people and more of them: "There are scarier people over there than there are here."

The difference in arrests in the United States and Britain appears to have much more to do with demographics than the relative skills of law enforcement. Most terrorism experts say the most insidious threats from terrorism now come not from organized terror organizations launching attacks that were hatched overseas, but from disenchanted Muslim extremists at home. And Muslim communities in the United States are generally more affluent and less dogmatic than those in Britain, which has a Muslim population of nearly 2 million. O'Hanlon described Muslim communities in Britain as "more cut off and more isolated" than in the United States.

"In the United States, the problem is one of dangerous people infiltrating the country, but the domestic problem is quite limited," said Daniel Byman, a terrorism expert and a professor at Georgetown University. "In the U.K. and in Europe in general, there is a large, unsatisfied Muslim population. It is a completely different issue. We think about bad guys overseas. They think about bad guys down the block."

That the threat of terrorism in Britain is potent, imminent and homegrown was illustrated by the citizenship of those arrested in the Heathrow bomb plot. Most of the 24 men accused of plotting to use liquid explosives to blow planes out of the sky were of Pakistani descent, but all of them were British citizens -- as were all four bombers in the July 7, 2005, attacks.

The immediacy of the threat makes British law enforcement officials appear more proactive and efficient in their pursuit of terrorists than their U.S. counterparts. It doesn't, however, necessarily make the British government more sympathetic to U.S. policy on terror. The cultural issues that create a higher threat level in Europe may fray the transatlantic alliance in the war on terror, as European countries, including the U.K., grow wary of supporting any American tactics that might inflame Muslim anger at home. European Muslims are already incensed by U.S. policy in Israel, and that too has been heightened by the Bush administration's apparent endorsement of the Israeli incursion into Lebanon.

"The strains in the United States-European alliance are based on the differing demographics back home," said Mark Perry, co-director of the Conflicts Forum and an expert on militant Islamist groups. "There are going to be deeper and deeper divisions in the Atlantic alliance."