Homegrown U.K. terror is a growing threat, multicultural "tolerance" can't combat it, and the war in Iraq will only make it worse. 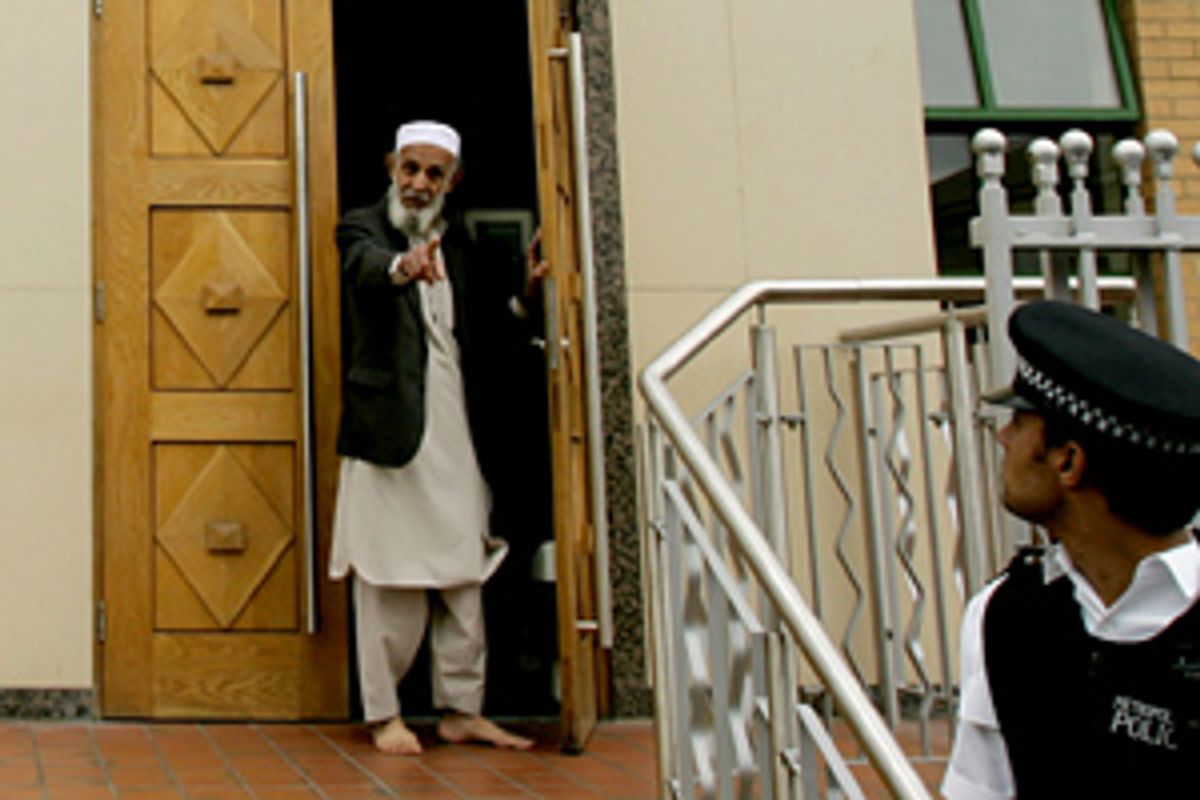 The most shocking fact about the foiled U.K. bomb plot may not be obvious to an American reader: The bombings were planned in High Wycombe, a suburban town that is a byword for middle English dullness and uneventful safety. When poet James Fenton wanted to refuse an invitation to go traveling in the Amazon with explorer Redmond O'Hanlon, he replied, "I wouldn't go with you to High Wycombe!"

That's not all Americans don't seem to understand about the crisis we find ourselves in now. In the immediate aftermath of 9/11 I wrote a piece for Salon about the lessons Britain had learned in 50 years of struggle against terrorist movements, from the Stern gang to the Irish Republican Army. Don't torture people, I wrote; don't shoot the young men who throw stones. Remember that wars go on for longer than seems remotely possible when you start them, and that the really dangerous enemies are not the young men trying to kill you today, but their unborn children, should they grow up to hate you, too. These were not startling or new reflections over here. They were, however, alien to the way that most Americans seem to think of terrorism. (A day or two later, I found myself on a radio show in Oregon, where a caller asked whether it was now OK to shoot or at least intern green activists because the people trying to stop logging were like terrorists.)

Five years later, the gap in understanding between Britain and America has widened. The American angle on the airplane bomb plot has been that Muslim terrorists were trying to attack American flights; here, what's interesting and frightening is that British Muslims were planning to attack flights out of British airports. In the five years since 2001 both the British left and right have had to come to terms with unpleasant truths.

As far as can be told, every single one of the suspects arrested here was born here. One was a white convert, known until a year ago by the strikingly un-Muslim name of Don Stewart-Whyte. We are not dealing here with something wholly foreign. The discovery of the plot comes less than a week after a poll for a reputable television program suggested that between a quarter and one-third of young British Muslims say they understand the motives of the suicide bombers who struck London in July 2005; about the same proportion would be happy to live under sharia law. Given a Muslim population of about 1.6 million, this translates to something between 100,000 and 200,000 people who could be described as terrorist sympathizers.

Now, from an American perspective, that can seem incredibly dangerous. When Jack Straw, the British foreign secretary, was sacked earlier this year, it was widely assumed that this was because he had said that it would be "nuts" to start a war with Iran. This is undoubtedly the majority view here, but it is offensive to the Bush government, which may be planning just such a thing and certainly believes that the threat of war is essential to its credibility. But a much more worrying theory has been floated by Irwin Stelzer, an economist who is regarded as Rupert Murdoch's ambassador here, who claimed in a recent column that Straw was sacked only after Condoleezza Rice visited his home district in northwest England and discovered that 20 percent of the voters there are Muslim. Straw, Stelzer alleged, was found to be compromised by his own constituency. This, if true, is an odd way to demonstrate your commitment to spreading democracy among your allies.

Of course, the presence of a large disaffected and angry bloc of Muslim voters who believe that British foreign policy is immoral and misguided creates a problem. The fact that our army in Iraq will almost certainly have to retreat, defeated, makes the problem worse. It looks as if the army in Afghanistan is fighting a much harder war than some politicians foresaw; it's also clear that America will have to pull back from Iraq, and the British army is hardly going to stay there on its own.

One may not like the fact that the invasion of Iraq has made homegrown British terrorism more likely. But it is a fact, acknowledged by almost everyone except Prime Minster Tony Blair. The trouble is that a defeat in Iraq will make the invaders seem both weaker and more immoral. This is a dangerous position to be in.

The right in Britain has had to come to terms with this, and the result has been a clear split between the Atlanticist and traditionalist wings, or what you might call the Republicans and the conservatives. The Republican, or neocon, press used to be the Murdoch papers and the Daily Telegraph, when it was owned by Conrad Black. But since Black was forced to sell the Telegraph and charged with the theft of hundreds of millions of dollars from his shareholders, the Telegraph has been much less reliably neocon, though it remains pro-American. Meanwhile, the most influential conservative paper, the Daily Mail, has taken a much more nationalist line and is now firmly opposed to the war in Iraq and ambivalent about Israel's war with Lebanon. Within the Conservative Party there has been a bitter little struggle over whether to describe the Israeli bombing of Lebanon as "disproportionate." When the shadow foreign secretary, William Hague, did so, he was furiously attacked by a former party treasurer, Lord Kalms. But Hague, and his boss David Cameron, seem to have calculated that in this instance all the votes are to the left of Blair.

Yet at the same time as the war has made elements of the right move left, or at least eastward, widening the Atlantic, there has been an equally bitter debate on the left about the principles of multiculturalism. The argument here is that the British political classes are quite right to listen to Muslims, but that they are listening to the wrong ones. It was originally, and still most clearly, put by French sociologist and expert on Islam Gilles Keppel, who coined the term "Londonistan" to describe the policy of the British security services in giving sanctuary to all sorts of unsavory Islamists on condition that they only plot against foreign governments. This largely unspoken bargain was not kept. The Islamists preached a global jihad, which, it turned out, included Britain and America in its targets. The most prominent of these agitators, among them Abu Hamza and Abu Qatada, have all been jailed or exiled since 2001. However, their influence remains, and will take decades to extirpate.

But Keppel argues, from a leftist, secularist point of view, that the more general policy of multiculturalism may fail because it is a hangover from the British Empire. He told a BBC radio program earlier this year that "the British in the Raj -- in the former Indian empire -- dealt differently with Muslims, with Sikhs and with Hindus. It was in a way a matter with them as with other empires of divide and rule; and that is something which led ultimately to partition of Pakistan and Indian and Bangladesh in 1947."

There is a bitter irony here, in that the dispute over Kashmir, arising from that partition, is still a live issue among many British Muslims, since about half of them are of Pakistani descent.

The point of Keppel's argument is that once you start dealing with people as members of communities, rather than equal citizens, you need to find leaders to represent these communities; and these leaders then become a privileged caste, whose members have an interest in keeping their communities unintegrated. The French, in this sense, have a much more American policy toward immigration than the British do. This may explain why 46 percent of French Muslims claim to feel Muslim first and French second, whereas 83 percent of British Muslims regard themselves as more Muslim than British.

In particular, Keppel identifies the dominant leadership of British Islam as "not so much interested in promoting the wellbeing of their flock as in promoting their own interest and their own role in society as people who have to be dealt with by authorities and who will negotiate."

His analysis has been taken forward by Martin Bright, political editor of the left-wing New Statesman, who in a recent pamphlet and television program has argued that the government is taking its advice from a particular politicized strain of Islam, descended from the Muslim Brotherhood, and ignoring the wider, apolitical grouping of Muslims who really couldn't care much about foreign policy anywhere and are perfectly happy to live in a secular state.

There is no doubt that some of the younger leaders of British Islam are clever and able politicians who would make their way under any political system. The question is whether we have the best political system to align their self-interest with that of the wider community. We will find out. It's too late to change. The British establishment has always worked by co-opting and corrupting rebels. Sir Iqbal Sacranie, the knighted leader of the Muslim Council of Britain, who got his start in national politics agitating against "The Satanic Verses," is not much different in that respect from Ramsay Macdonald, the first Labor prime minister, who ended up splitting his party when he went into coalition with the Conservatives.

Macdonald is excoriated to this day as a traitor. There is always a danger that the leaders who will talk to us are not those who can deliver the sentiment on the streets. There seems to be no religious or political leadership that can represent the true extremists, though, clearly, the police are talking to some of them, otherwise we would not have had the information that allowed for the discovery of this plot.

Then again, when High Wycombe turns out to contain a bomb factory, the one thing that's certain is that nobody really understands what's going on, nor how it will end.