Showtime's "Weeds" grows stronger and even more unruly in its sophomore season, sending safe, suburban family life up in smoke. 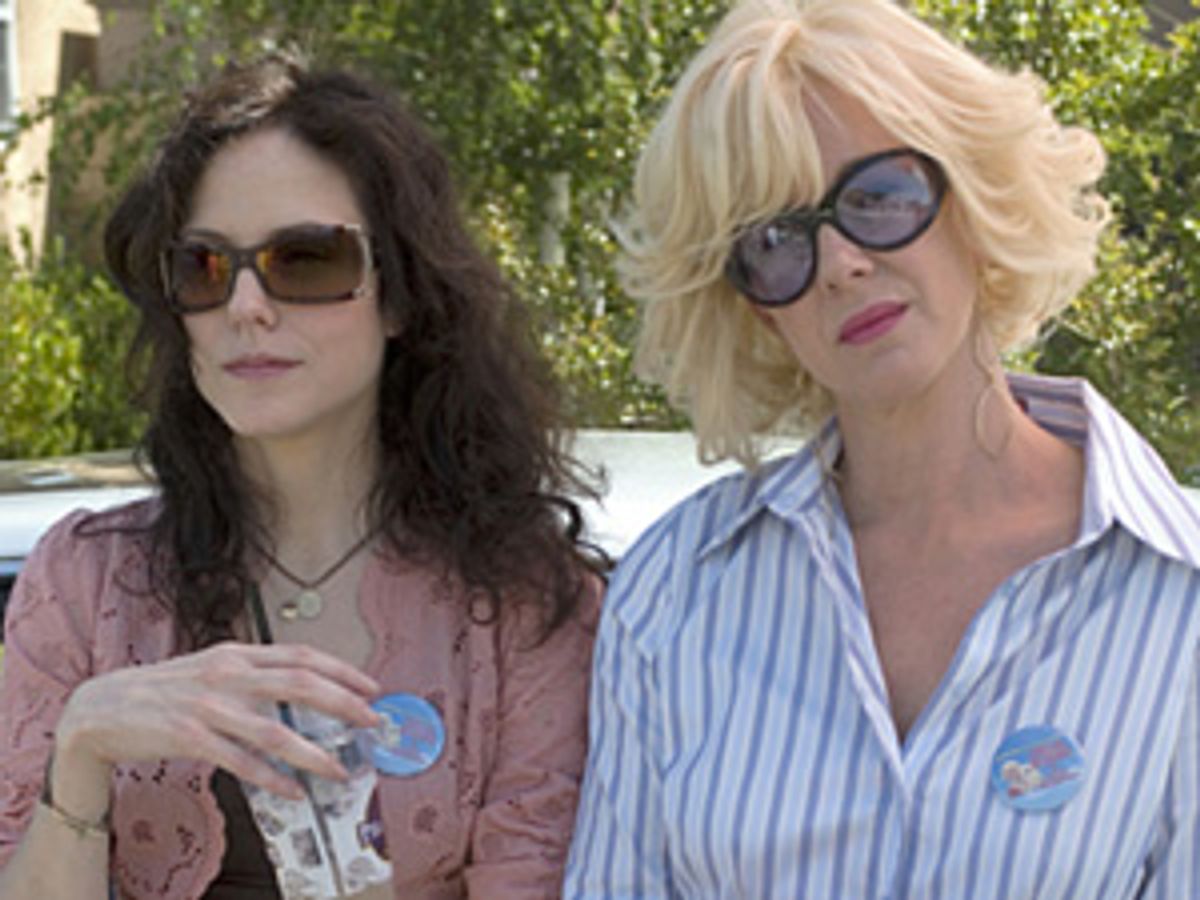 Writers have always relished the suburbs as a nice, clean canvas against which a messy outsider can best take shape. On a pristine suburban landscape, flaws -- whether they're rust and blemishes and dirty windows or financial setbacks and chronic illnesses and existential angst -- have a way of standing out. This suffocatingly immaculate setting provides the perfect backdrop for Nancy Botwin (Mary-Louise Parker), a slightly scattered widow whose attempt to support her family by selling pot (and more recently, growing it) forms the thrillingly deviant center of Showtime's "Weeds" (second season premieres 10 p.m. Monday). The show gets its name from Nancy's profession, but it also hints at those unruly parts of ourselves that spring up, uninvited, and mar every attempt at a perfect picture. This is damn fertile soil for a comedy, and creator Jenji Kohan and the writers of "Weeds" farm it for all it's worth in the show's second season, cultivating vivid, surprising stories that naturally transcend the typical limitations of the half-hour format.

"You cannot become a lesbian just because you don't want to lose weight!" Celia Hodes (Elizabeth Perkins), Nancy's closest friend, announces to her daughter when she catches her kissing another girl. Unlike Nancy, Celia is the kind of mother who thinks that she knows exactly what's going on in kids' heads. To her, there's a right and a wrong way to do everything, and most of the people around her are getting it all wrong. Despite her controlling parenting, Celia maintained the pleasant demeanor befitting an Agrestic housewife until a breast cancer diagnosis during the first season sent her spiraling out of control. Suddenly awakened to the stultifying conformity of her surroundings, Celia became prone to wildly inappropriate outbursts, from flashing her breasts in front of Nancy's teenage son to having an extramarital affair with Nancy's business partner Conrad (Romany Malco).

This season, Celia has set her sights on running for City Council against Nancy's stoner accountant and other business partner, Doug (Kevin Nealon), and she won't let anyone talk her out of it. She's also determined to get Nancy to open up to her, but when Nancy remains tight-lipped, Celia pulls her hair and screeches, "Be my friend! Be my friend!" Such reactionary antics might seem like empty high jinks on another comedy, but thanks to the smart dialogue and Perkins' fine acting, there's a melancholy, almost regretful flavor to Celia's boldest stunts and most outrageous statements. In the midst of the nastiest or most bizarre explosion, we get a palpable sense of the years Celia lost to following the path of least resistance.

Then there's Nancy's brother-in-law Andy (Justin Kirk), a major-league slacker and recreational stoner whose utter lack of concern for the opinions of others allows him to traipse happily through the most restrictive environments, enviably heedless of negative outcomes. When he's not pulling some scam or poisoning his nephews' little minds, Andy regularly gets high and rambles on incoherently with Doug. In one scene from the first season, Doug and Andy, in grandest stoner style, wonder out loud over whether their rat-infested pot might carry "the plague" (Doug eventually decides that "fire kills plague" so the two are safe to smoke up.) In another scene, while passing the bong back and forth in Nancy's living room, the two men get into a heated debate over what "taint" is. Finally Doug asks the housekeeper, "Lupita, what do you call the thing between the dick and the asshole?" Her answer? "The coffee table."

This is what "Weeds" does best: It takes the nastiest bits of domestic life and turns them upside down, showing us the lives we might lead if we chose to loosen up, ignore the naysayers and follow our most genuine urges. Even when Andy takes Shane to see a hooker or Nancy shows up late for dinner and then washes down two aspirin with a beer instead of eating, it offers a little emancipation from conventional expectations of what's "normal." This is where "Desperate Housewives" seemed to be headed early in its first season, before it got waylaid by the empty plot twists needed to satisfy the expectations of the prime-time soap.

"Weeds" roams free of such expectations. Instead of melodrama and murders, we get a believably mundane snapshot of a life spinning out of control. Surrounded by careers and lives as finely tuned and perfectly timed as high-end sprinkler systems, Nancy fumbles through her life, half in shock, perpetually nursing the dregs of a triple Frappuccino, her face a messy jumble of questions. On a typical day, Nancy might pick up a massive bag of pot from her dealer, spend the night with her lover, then absentmindedly drift into her own house in the morning, ashamed at the chaos she's left behind. We're witnessing an irresponsible mom who's coming apart at the seams, sure, but we're also seeing an (albeit extreme) alternative to following the strict rules of what makes a good parent. As scattered as Nancy can be, it's not clear that she's any worse off than the judgmental, controlling parents around her. After her teenage son, Silas (Hunter Parrish), gets into a tussle with his girlfriend's father, who blurts out that the kid is a "fucking loser" and that Nancy is a "shitty parent," you can see the rage light up Nancy's eyes right before she shoves the guy and threatens to kill him if he touches her son again. Nancy is a wreck, but she's still the mom you'd want on your side: Preoccupied and inconsistent, yes, but also true to herself, honest and fiercely loyal.

This show rests on such a strong premise that it could've easily devolved into predictably goofy stories and fluffy little twists in its second season. Instead, the writers held themselves to higher standards, as if they were writing a thoughtful, character-driven drama rather than a half-hour comedy. Even when Nancy's boyfriend, who we found out was a DEA agent at the end of last season, goes to some extreme and unfathomable lengths to keep her in his life, the whole thing feels oddly touching instead of totally implausible, because both characters are fully realized and feel like real people. In fact, five episodes into the second season, I found myself wishing that "Weeds" were an hourlong drama, just so there'd be more of it to savor.

Of course, the second season still offers a healthy dose of over-the-top, farcical situations: Doug seems likely to win his City Council seat without having a single idea beyond making sure the other council members bring good snacks, since, as he tells one guy, "vegetarian pigs in the blanket are bullshit"; Celia's husband, Dean, has a meltdown in the lobby of his law firm after being fired, and ends up getting "tasered" by one of the partners; and Andy tries to wriggle his way into rabbinical school just to avoid getting sent to Iraq. But there are also enough thoughtful, realistic stories to make Nancy's friends and family feel like the slightly odd neighbors next door -- the sorts of neighbors you really wish lived next door, at least when they're not flushing socks down the toilet or yelling at each other or being threatened by the local drug lords.

Like many writers before them, the creative team behind "Weeds" clearly takes pleasure in twisting the straight lines of suburban life into tangled knots, and there's a good reason for that: The contrast between what constitutes proper family life in America and the chaotic mess that most of us make instead is enough to keep us locked in a struggle to keep up, to fit someone else's restrictive image of the lives we're supposed to be leading. As confused and preoccupied as they are, Nancy and her tribe remind us that no matter how much pruning and trimming we do to keep ourselves neat and appropriate, some genuine, impetuous self is sure to rear its ugly head, like a leggy stalk of milkweed in the middle of a begonia patch.