Since I was a kid I've shunned men's bikini briefs. But now I'm one of the guys with a shiny marble bag -- strutting poolside, liberated. 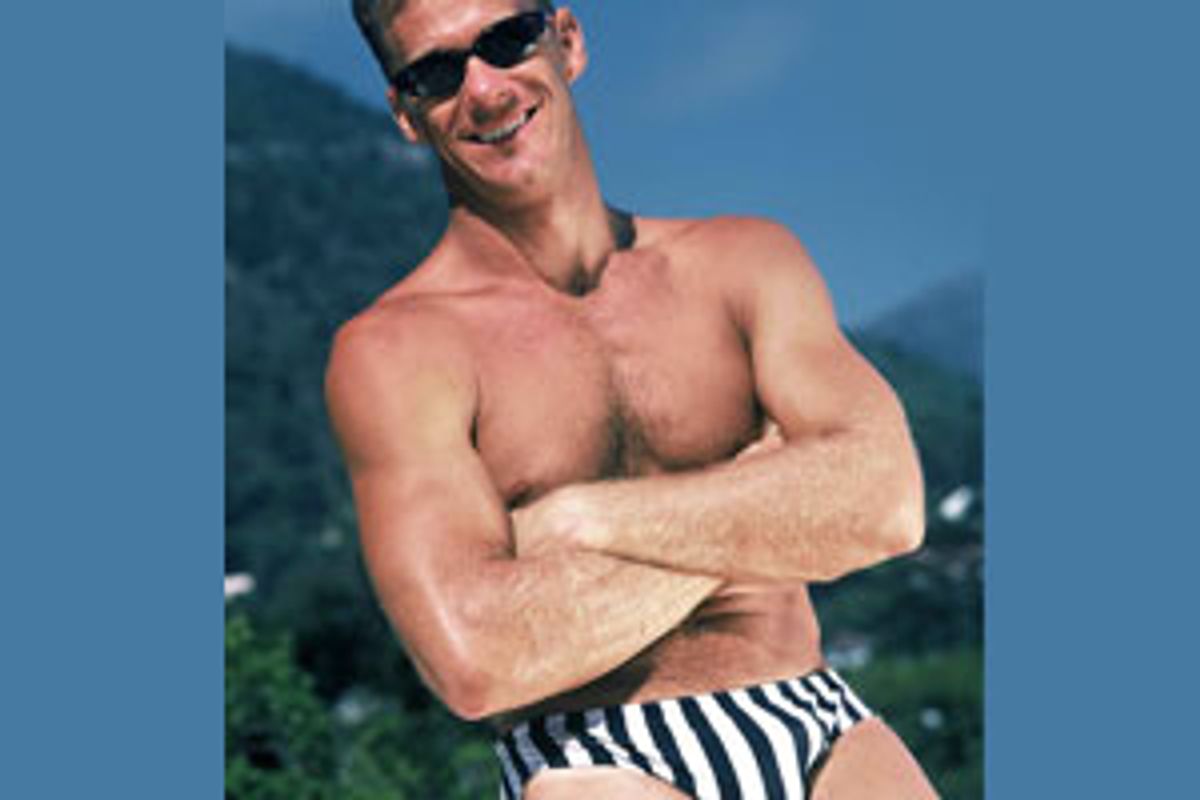 Like many other men who grew up on the ocean, I used to suffer from a sort of Speedo-induced PTSD, dating from when I was 8 years old and a friend of my parents, a Dane, appeared one day in a Speedo on a Connecticut beach, hale and hairy, flapping his arms, his bulge shining like a car bumper. Even at that early age, I sensed that something about this picture was deeply wrong, and in the years that followed, I learned to avert my gaze whenever one of these smiling bulgemeisters appeared. But now, nearly 30 years later, I'm the one standing there, flapping my arms. Somehow, I've become one of them: the guy with the marble bag.

It's been a long journey, and getting here has entailed coming to terms not only with my own personal baggage, as it were, but also with the not insignificant cultural baggage that dogs the Speedo to this day. What's so terrible about a guy wearing a woman's bikini bottom? Well, beside the obvious point -- that the vast majority of men don't go to the gym every day -- there's the unspoken association of Speedos with a certain queasy strain of '70s male sexuality. Squint your eyes at any halfway fit Speedo wearer and behind him you'll see the shadow of a another, even less savory figure: the Chippendales male dancer. Chippendales premiered in Los Angeles in 1979, and within a few years daytime TV had firmly imprinted the icon of the male dancer in the popular imagination. With their oiled abs, white shirt cuffs, bow tie, and sleek briefs, the Chippendales embodied the final, unctuous exudation of the sexual revolution.

Chippendales dancers were a cartoon to begin with -- a semi-sarcastic rip-off of their bare-breasted and bedazzling female counterparts, and the real problem with wearing a Speedo was how it catapulted you into that same cartoon category. Cartoons are fine when they stay on the page, but in real life -- or even on the big screen -- they tend to work less well. Remember the little red trunks that Christopher Reeve wore in the first Superman movie? The codpiece protected us somewhat from the peril of visualizing Superman's parts, but even in this shining example of wholesome Americana there remained something a little troubling. The essential problem with Speedos is the way they distract attention from the face. How could anyone carry out a normal conversation with Superman when his bulge was leaping for their attention like some excitable dachshund?

Until 1993, virtually the only people wearing Speedos on U.S. beaches were Europeans, blissfully ignorant of Chippendales and all it represented. But then came Mark Wahlberg, who forever changed the way we think about men wearing underpants in public. Calvin Klein, in a stunning coup for the male groin, repackaged Wahlberg's package as desirable fashion element. In the ensuing years, tight swim trunks began to seem somewhat less preposterous.

Still, it's a long way from tight swim trunks to the banana hammocks with the one-inch sides that you spot in swim team locker rooms and on the shores of Europe. The turning point for the Speedo may have come when '70s fashion came back into vogue. Suddenly it was cool to be sleazy. Wife beaters were de rigueur, along with flared pants, corduroy, vinyl, and spread collars. Sideburns lengthened, and hipsters toyed with ironic mustaches. The same retro fetish fueled the success of "Baywatch" (1989-1991), and its hero hunk, David Hasselhoff, a quintessential '70s leading man (tall, hairy, handsome), and the subject of what is surely the most mind-blowing Speedo-related animation ever made. Finally, a guy in a Speedo, worn in the right spirit, could count on a little irony to cover up whatever the suit didn't.

My swimwear of choice has always been regular, thigh-length shorts -- roughly the sort I wore when I was 8, when everything was simple. This was less a fashion statement than a studied compromise: Boardies, the knee-length shorts that rose to prominence on a double wave of low-riding gangsta and surfer fashion trends, caused too much drag, and unlike Speedos, simple trunks spared the rest of the world the sight of my unsightlies -- an important consideration for a citizen as responsible and socially conscious as myself.

But one fateful day, I forgot to bring my trunks to the pool, and the gym store offered only two options: boardies and noodle benders. Ever considerate, I selected the boardies. The first lap felt like I was caught in seaweed. Still, I swam on, flipping at the end of the lane and shoving off.

And that's when it happened: Before I could say Hasselhoff, my Jimmy was out there in the blue, floating free like an astronaut.

If you're a lap swimmer, you'll see a good argument for Speedos every time some 19-year-old knifes past you in the fast lane. They don't just make you faster; they separate the amateurs from the pros. Was I a pro? Scrambling around underwater, ass breaching, trying to hoist up my shorts, I decided that, indeed, I was. And with that, all the cultural baggage, the locker room insecurities, the reluctance to inflict optical damage on my fellow citizens -- all got pushed aside. In the end, it comes down to pragmatism; hang the fashion consequences. There's even a certain pleasure in being the object of stares from other swimmers, fearfully garrisoned in their voluminous trunks, while I strut the poolside, liberated.

I'll admit, stepping into my Speedo for the first time, even in the privacy of my living room, I felt ridiculous. But then my wife, responding intuitively, started hooting and sticking dollar bills in my waistband. As if my magic, my hips started moving. Once you've crossed the line, what else can you do but play along?