First it was tweezers, now mascara. Every penny spent confiscating makeup is a penny that could go toward law enforcement -- where it really matters. 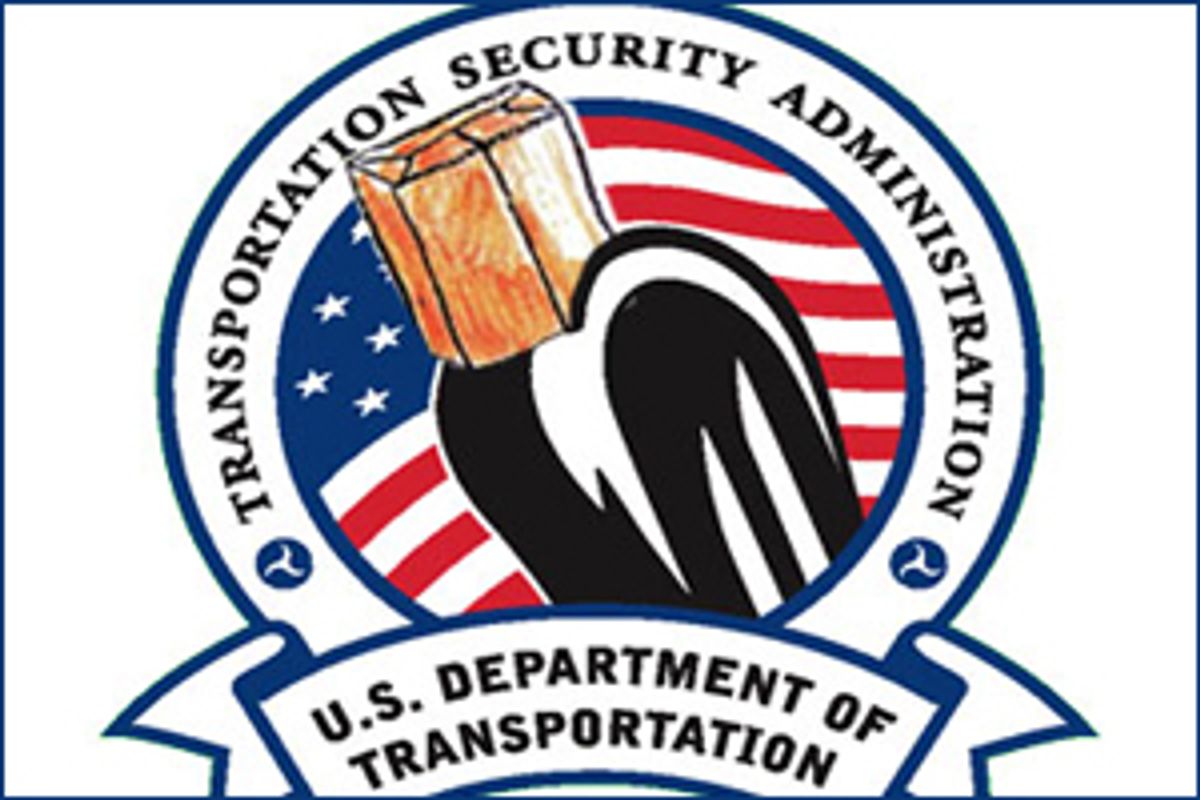 "The woman was carrying hand cream and matches but was not a terrorist threat."

Those were the words of a Transportation Security Administration (TSA) spokesman after a United Airlines jet en route from London to Washington was diverted to Boston on Aug. 16. A 59-year-old passenger aboard flight 923 suffered a panic attack and became violently disruptive. Never mind that the Boeing 767 was escorted to Boston by fighter jets (what we used to call "air rage" has become a full-blown national emergency); the idea of hand cream and matches -- hand cream and matches -- becoming the focus of a TSA press conference, is clear evidence enough that our security hysteria has become unmanageable.

News of last week's foiled London terror plot had finally begun to drop from the headlines, but not before spring-loading us to act like fools, and touching off massive changes in airport security that are destined to serve no real purpose. Liquids, gels and even certain cosmetics are no longer permitted aboard commercial flights in the United States. Prescription medicines and infant formula are exempt, but the list of contraband includes everything from drinking water to hairspray. Among the forbidden materials: mascara and liquid-filled baby teethers.

On flights to and from the U.K., hand baggage was banned entirely for several days. Passengers may now bring aboard one small parcel no larger than 17 by 13 by 6 inches -- roughly the dimensions of a laptop case. Computers and music players are allowed, but they must be removed from luggage for separate inspection.

It's difficult to tell how long the new prohibitions will last, or to what scope they might be expanded, but the rumblings are ominous. According to officials at TSA, the ban on liquids and gels is set to last indefinitely. Rumors have surfaced that laptop computers and other electronic devices could soon be restricted as well. Is airport security about to experience another, even more powerful paradigm shift than we saw in the aftermath of Sept. 11, resulting in even greater hassle than we're already used to? It's disheartening to think so, but certainly the stars are lining up that way.

To properly get our arms around the folly of it all, we need to look back at what happened in 1995. I'm referring to the notorious "Oplan Bojinka" -- which I wrote about last week -- a conspiracy linked to al-Qaida that was broken up by Philippine police only days before 11 U.S. jetliners were targeted for destruction. The parallels between the Bojinka and London operations are truly remarkable, involving similar explosive materials and a strikingly similar modus operandi. Yet on the heels of Bojinka, airports remained calm. Passengers were free to step aboard with their cups of coffee and bottles of shampoo. This forces us to wonder: If it is truly in the interest of air safety to stop passengers from bringing the most basic and commonplace personal items on board, why was it not done the first time?

Mostly because authorities then had sense enough to understand such rules would be highly disruptive, tediously work-intensive, and in the end not very useful. Ban what we may, it doesn't take the world's smartest criminal to realize there are an unlimited number of ways to smuggle a potentially dangerous item onto a plane: be it an improvised knife hewn from plastic, or explosives or flammables made from many different substances -- solids, liquids and powders. A person could spend all day concocting nefarious, and ultimately undetectable, instruments of destruction.

"We can't keep weapons out of prisons. How can we hope to keep them out of airports?" poses Bruce Schneier, a prominent security expert and the author of "Beyond Fear."

Eleven years ago we were sensible enough to accept this -- and it's not as if terrorism was something new, with the Lockerbie bombing and '93 World Trade Center attack still fresh in our minds. Lo and behold, no American planes were bombed with liquid explosives -- or any other kind -- in the interim. The true nuts and bolts of keeping terrorists away from planes, meanwhile, was going on out of view -- the responsibility of law enforcement and intelligence agencies, not part-time screeners at the airport. Numerous intelligence failures were brought to bear on Sept. 11, certainly, but unfortunately our initial reaction was to scapegoat airport security, whose role in the attacks was all but irrelevant. At the time, box cutters were not prohibited items. If they had been, the hijackers would have fashioned some other weapon.

The X-ray machine and metal detector are what they are: a serviceable final line of defense, chiefly helpful for keeping obvious weapons -- a handgun, for example -- away from commercial aircraft. They are not, and we should not expect them to be, front-line anti-terror tools.

"Terrorism needs to be stopped at the planning stages. That's where our security can do the most good," Schneier says. "By the time the terrorist gets to the airport -- or the shopping mall, or the crowded movie theater -- it's too late."

To wit, neither the Bojinka plotters nor the London cabal ever made it to the airport. They were outfoxed ahead of time through the hard work of behind-the-scenes investigators.

Real security isn't glamorous. It doesn't result in splashy news stories and footage of stranded travelers sleeping on terminal floors. And every penny spent confiscating mascara is a penny that could be spent elsewhere in the security hierarchy. The key is getting the most bang for your security buck, and you're not getting a whole lot of bang -- and you're losing a whole lot of bucks -- with yet another clampdown on this or that dangerous item du jour.

"Exactly two things have improved airplane security since 9/11," Schneier says. "Reinforcing the cockpit door and teaching passengers that they need to fight back. Everything else has largely been a waste of money."

I would add the screening of checked luggage to that list of improvements. Not long after Lockerbie (and the tragic bombing of UTA flight 772, I should add, nine months later), Europe began scanning all checked suitcases for explosives. Finally, after Sept. 11, we introduced similar measures. Inspection is not yet comprehensive at all airports, but even partial scanning is better than none at all, and long overdue. An analogous system for carry-ons -- one that searches more exclusively for explosives rather than fussing with scissors and soda bottles -- would be equally beneficial, but thanks in part to a legacy of procrastination and wasting our money elsewhere, it's a long way off.

Until that day should come, we have to ask: Is it reasonable that our reaction to a threat, already known about for many years, is to ban drinking water and shaving cream from airplanes? Really, is that reasonable?

The bureaucrats in Washington, ultimately responsible for coming up with the latest strictures, seem to think so, even as many airport operators and security personnel sharply disagree. "The levels of incompetence and waste at the TSA and Department of Homeland security are truly frightening," says the manager of a midsize regional airport. The manager, who asks that his name not be revealed, tells a story of comical incompetence as the news from London filtered in. "We were given a security directive with no instructions or guidelines on how to implement it." On a conference call, high-ranking TSA staff in Washington were not aware of even basic definitions pertaining to security zones and screening protocols. At one point, airports were told the ban on liquids even applied to aircraft refueling trucks. "The TSA people did not know the difference between a SIDA [Security Identification Display Area], a Sterile Area, and a Secured Area. You would think in the last five years they would have learned some of this."

TSA did not respond to calls or e-mails for this article. Presumably its staff is busy handling fallout from a Department of Homeland Security study claiming the TSA's much vaunted shoe inspections, a security staple for the past four and a half years, aren't really effective. TSA ramped up the X-raying of footwear as part of its post-London pageantry and insists the procedures are valuable.

Now, imagine the impact on the airlines should prohibitions be expanded. The industry has already posted $35 billion in losses since Sept. 11, and an unknown number of high-end business travelers, historically the airlines' most valuable customers, have migrated to private aviation, where fractional ownership programs offer a relaxed and increasingly inexpensive alternative to the madness of hub connections and the ransacking of carry-ons. Bring in the sorts of draconian rules some people are talking about, such as banning laptop computers, and you'll likely see a mass exodus of business fliers. Simultaneously, as the hassle factor climbs, flying becomes less and less attractive for the leisure traveler, especially on short-haul routes.

Airlines have remained mostly silent thus far. Traditionally, it's not in the industry's best interests to speak out against anything perceived as bettering security. But they can't be pleased. The nation's carriers have been footing the bulk of the airport security bill since 2001, passing along the expense to passengers through unpopular ticket taxes and surcharges. Those costs will be increasing. (In London, on the other hand, British Airways is considering a lawsuit against the British Airports Authority, operator of Heathrow Airport, for security-related cancellations stemming from the new screening policies.)

"Aviation security is national security," says a spokesperson from the Air Transport Association. "The burden of paying for that protection should be borne by all. We believe that using an array of procedures offers the best security available. We support continued R&D and are always looking for new technologies. Constantly evolving, layered, intelligent, and random measures are essential components of any effective security program."

But for all the scorn we're able to heap on our government overseers, there remains the issue of public complicity. There's a consensus among many travelers that swapping a few minutes of convenience and dignity for an added buffer of security, perceived or real, is a worthwhile exchange. "Better this than being blown up," were the words of one passenger, speaking to a reporter from the Boston Globe. "It's an inconvenience, but it's necessary." This sentiment has been echoed far and wide. Taking the opposite view can get you labeled a criminal sympathizer. "I got into some pretty heated conversations at Heathrow," one flier tells Salon. "My use of the phrase 'shutting the gate after the horse has bolted' got me branded a terrorist in the middle of a crowded pub."

The safety vs. convenience tradeoff makes for an effective sound bite, but in truth it's a slippery slope that traps us in an unwinnable shell game: In the aftermath of Sept. 11 our focus on was sharp objects, until a renegade Brit named Richard Reid wore his explosive sneakers past guards at Charles de Gaulle. Now it's sharp objects, sneakers and liquids too. With Bojinka in mind, shouldn't we also outlaw light bulbs, cotton balls, batteries and watches, since those were critical elements in Ramzi Yousef's microbombs? Some would say yes. Some are saying yes. Where to draw the line?

Reasoned thinking isn't good enough for a segment of the populace obsessed with safety and the specter of terrorists. We expect that every flicker of our color-coded alert will be met with more and more layers of protection -- even when that protection drives us crazy, and even when it serves no useful purpose. We are following this path deeper and deeper into absurdity.