This little comedy about college losers who start their own school is buoyant, punky late-summer fun. 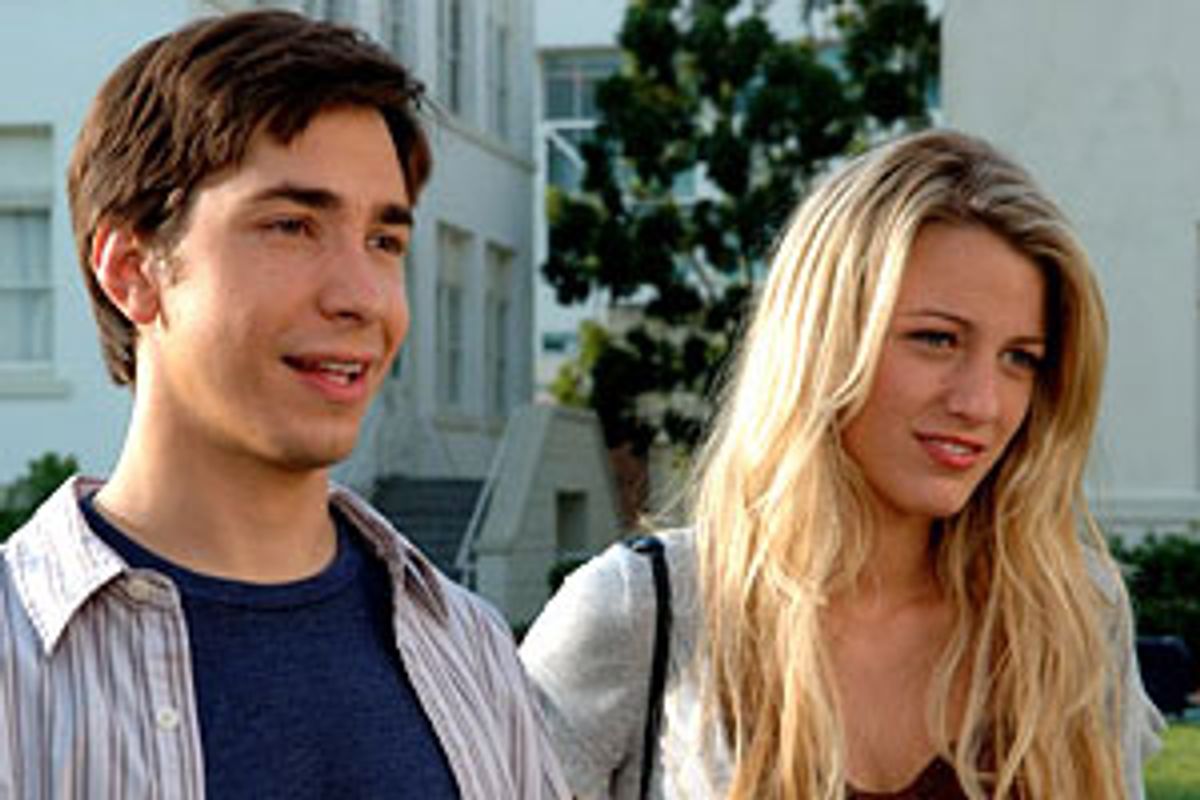 It's a shame so many people have air conditioning at home these days -- and also that movies are so damn expensive -- because "Accepted" is the sort of rambunctious, low-stakes summer comedy that's perfect to duck into when it's too hot to do anything else.

High school senior Bartleby Gaines (Justin Long) has been rejected by each of the seven colleges he has applied to, and his straight-arrow mom and dad (Ann Cusack and Mark Derwin) are mightily displeased. Plus, the rich, popular kids -- as well as Bartleby's tubby, nerdy best friend, Schrader (Jonah Hill) -- are all going to tony, nearby Harmon College, and Bartleby simply feels like a loser. His solution: Invent a college, complete with its own Web site and building (an abandoned mental institution fits the bill), so his parents will have a place to drop him off when September rolls around. After that? Well, he hasn't thought that far ahead.

But it turns out that the phony Web site Schrader builds for the "South Harmon Institute of Technology" -- its acronym inspires a wealth of silly jokes -- is actually operative. And thanks to a button marked "Acceptance is just one click away!" real students, of all loserish stripes, start streaming into the school, overjoyed that they've been accepted somewhere, anywhere. Bartleby and his friends have to come up with a curriculum, fast, and in between building school skateboard ramps and opening on-campus tiki lounges, they come up with a revolutionary -- or possibly just lazy -- system that lets students invent the types of courses that interest them most: The options include Slacking 101 and Bullshitting 236.

"Accepted" -- its director is Steve Pink, and this is his debut -- is an absurd little trifle, but it does have a kind of buoyant, punky energy. (The script is by Adam Cooper and Bill Collage and Mark Perez, from a story by Perez.) The jokes are often pleasingly unapologetic in their absurdity: A glazed-looking lad, after announcing that he wants to learn to "blow shit up" with his mind, stares intently at a football, then a pineapple, with wholly unexciting results. And its heroes and villains are clear: The dean of the fancy school (played by the suitably immovable Anthony Heald) muses aloud, "Rejection: That's what makes a college great. The exclusivity of any university is judged primarily by the number of students it rejects." But the dean that Bartleby coaxes to the school, Schrader's Uncle Ben (played by the supremely cantankerous Lewis Black), a former academic who never fit into the collegiate world and was dismissed in disgrace, declares, "College is a service industry," asserting that the educational system is supposed to serve students, not the other way around. (Universities are fond of taking credit for giving kids the gift of learning, conveniently forgetting that plenty of people are still paying for that "gift" well into their 30s, in the form of student loans.)

But even though "Accepted" slings a few wisecracking truths, it isn't trying to be any sort of manifesto for education reform. It's simply a picture that allows us the luxury of admitting that the slackers and layabouts are often more fun to hang out with than the drones: At one point the kids from SHIT throw a party the same night the expensive-school frat boys are planning a "roaring '20s" fete. But no one shows up at the theme party; everyone wants to be down the hill in the old nuthouse, pogoing to an amateur punk band's rendition of "Blitzkreig Bop" -- and can you blame them? Will the kids from SHIT ever amount to anything in the real world? The question is beside the point. Sometimes, on a hot summer day, a little underachievement is just the ticket.