Why do the innocent confess to crimes?

Holes have appeared in John Karr's claim that he killed little JonBenet Ramsey. Experts explain why an innocent man might pretend to be guilty. 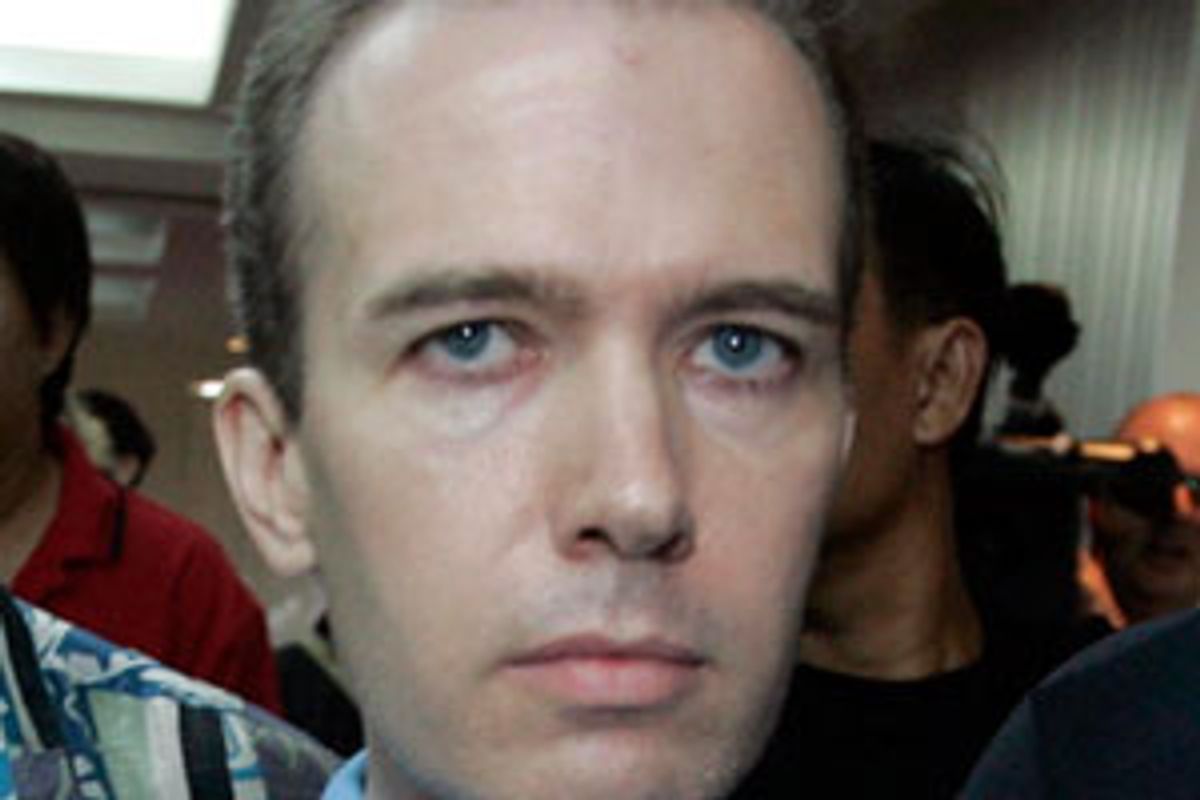 After 10 years, there is now a confession in the murder of child beauty queen JonBenet Ramsey, one of the most infamous unsolved criminal cases in American history. John Mark Karr, a schoolteacher living in Thailand, has reportedly told U.S. law enforcement officials that he killed Ramsey by accident, that he'd "loved" the 6-year-old. Cable news outlets have responded with blanket coverage.

But already some doubt has been cast on that confession. Karr's ex-wife has come forward to say that Karr was with her in Alabama on the night Ramsey was killed, not in Ramsey's hometown of Boulder, Colo., and Karr's father has told reporters that as far back as 2001 his son lied and said he was being held in connection with the murder. Additionally, the head of Thailand's immigration police -- who, it should be noted, was not present when Karr was questioned -- says Karr told interrogators he had drugged Ramsey, a statement that appears to contradict the official autopsy report, which says no drugs were present in the girl's system. Karr has also reportedly told police that he picked Ramsey up from school the day of the murder, which would not have been possible, given that she was on Christmas break at the time.

Salon spoke with two experts on confessions: Saul Kassin, a professor of psychology at Williams College, who co-wrote the book "Confessions in the Courtroom," and Richard Ofshe, a professor emeritus at the University of California at Berkeley who has worked on many of the country's high-profile cases of false confession. Ofshe is currently involved in the cases of the Central Park jogger and Phoenix temple murders.

What are the signs that a confession could be false?

Ofshe: The classic, of course, is that the person is unable to supply information about the crime that it would be reasonable for the perpetrator to have. That's the classic way of weighing a confession. Police are trained to seek information that corroborates the person's 'I did it' statement of the exactly the sort I'm talking about. Usually when there's a very high-profile crime, if police are smart, what they do is not let all the information out. They withhold significant parts of it, especially anomalous things about it, so that when the disturbed call in and say, 'I did it, I did it,' they can be eliminated, because they don't know what kind of mutilation happened to the body, or this, that or the other thing. So there's a pretty straightforward way of handling what one would ordinarily anticipate would be a not uncommon problem.

[Confessing] 10 years after the fact is a little strange. It's an odd set of characteristics, in the sense that why would someone who committed the crime 10 years later decide to step forward? If he didn't just step forward, what is it that led police to him? Did he just voluntarily give the statement, or did he have to be interrogated? That is, was there resistance to be overcome? These are all things that we would need to know before we could even begin to think about or evaluate any kind of statement.

What about body language, tone of voice, anything like that?

Police are forever thinking that during the course of an interrogation somebody looks like they're upset. That of course leads them to think that the person they're interrogating is showing guilt, but they can't tell the difference between someone showing guilt and someone showing distress because of something they didn't do. All the research shows that, if anything, the more training you've got to read body language the worse you are at it. There's a study by a guy named [Paul] Ekman, who's acknowledged as the guy who studies this, and he showed that law enforcement officers who were given training in reading body language were less likely to be accurate than people with no training, people who weren't even law enforcement. It just misleads them. Except for the grossest sort of circumstances where you don't need any training to see that someone's upset, to make fine discriminations, it just can't be done.

Why would somebody confess to a crime they didn't commit?

A voluntary false confession, usually it's because there's something wrong, they want attention. They're very often unstable, and they're not thinking of the long-term consequences. They're just responding to a short-term need for attention because their judgment is badly distorted.

To illustrate that, if somebody can put you in a position in which you are forced to choose between a capital murder charge, anticipating spending three or four years in prison pre-trial, living with the anxiety, bankrupting your family, going through a capital murder charge that a police detective is telling you, 'I have more than enough evidence to convict you, because I'm convinced you did it, and the prosecutor's going to be convinced of it, and the judge and the jury are going to be convinced of it,' even though you know you didn't commit the crime, that's all the information you've got. The interrogator lets you know that if you go to trial you'll be convicted and executed, or 'Just agree that this is what happened, and I'll make sure that nothing happens more than you'll have to go to traffic school.' Which would you do? Whether you committed the crime or not, traffic school is the way to go.

That's what causes people to falsely confess, because confessing seems to be rational.

How prevalent are false confessions?

No one really knows the frequency or the rate at which it happens, and there are reasons why. It starts with, we don't know how many interrogations happened in America in a given year, and we certainly don't know, even if we could define the universe, we don't know how many result in a false confession. Certainly not every false confession ever comes to light. You can't ask what's the rate, or even what's the frequency.

What you can ask is how important the problem is. And on that score, there's research that is beginning to convince people that as far as explaining what causes miscarriages of justice, false confession may be the No. 1 cause. If it's not the No. 1 cause, it's the No. 2 cause. If you want to improve the criminal justice system, you would make a major contribution by eliminating the possibility of a false confession being acted on.

What did you think of John Mark Karr's confession to the murder of JonBenet Ramsey?

Kassin: Certainly one interpretation is that he is confessing to involvement, apologizing and claiming that it was an accident because that's what happened. But another possibility is that he's making exactly those same statements because he feels trapped for one reason or another.

What we would need to know is, first of all, whether his confession tells us details that couldn't have been known in any other way but direct experience, that couldn't have been gathered from the newspapers, or from his conversations with anybody, or from his interrogation, if he had been interrogated. The second thing we'd want to know is whether the details he does give -- assuming he does give some detail, because I noticed he didn't; in fact, it seemed to me that every time somebody questioned him about the details he said "no comment," so I'm agnostic on the question of whether he has details to give -- match the actual known facts of the case. There was some discussion of DNA, some issues pertaining to handwriting with regard to the ransom note; certainly those would have to match up as well.

His demeanor struck me as odd, but odd demeanor may suggest something about him as a person, not him as a liar right now.

What do you mean by odd?

He seemed very hesitant, very halting, very slow in his speech. But none of that is meaningful, none of that tells you whether he's lying or telling the truth. It may tell you nothing more than the fact that he's in a very stressful situation at the moment.

Being in a country like Thailand, which is known for having prisons that are not as, hospitable, shall we say, as American prisons, can that have an effect?

Again, one has to understand that when people do confess, they confess because, at the time, it's in their best interest. That's why criminals confess, and sometimes, that's why innocent people confess. They perceive that to be the best they can do under the circumstances.

What we're hearing Thursday afternoon is that some of the statements in his confession may not be consistent with the facts of the case, and that he may have a history of lying about this case and his relation to it. With that in mind, how should we look at the confession?

In a sense, the only way to prove the confession false is to prove that it is wildly inconsistent with the facts of the case -- and a judge or jury might see that in this new information -- or of course to find someone else. If the DNA evidence suggest that there's not a match to him where there should have been, or if the handwriting from the ransom note is not a match, then questions have to be raised about the confession.

When you say it has to be "wildly inconsistent," what do you mean by that?

You would not necessarily expect that a perpetrator's confession to a crime he committed would be perfect. People are inaccurate in their reports and their memories of past offenses. This being 10 years old, that would not be surprising. To the extent that there are wild inconsistencies, to the extent that the facts described are totally wrong, what it essentially means to me is not necessarily that he's innocent but that this confession has no value.

No value in a court of law?