The dazzling charms of this fairy-tale romance magically make its many flaws disappear. 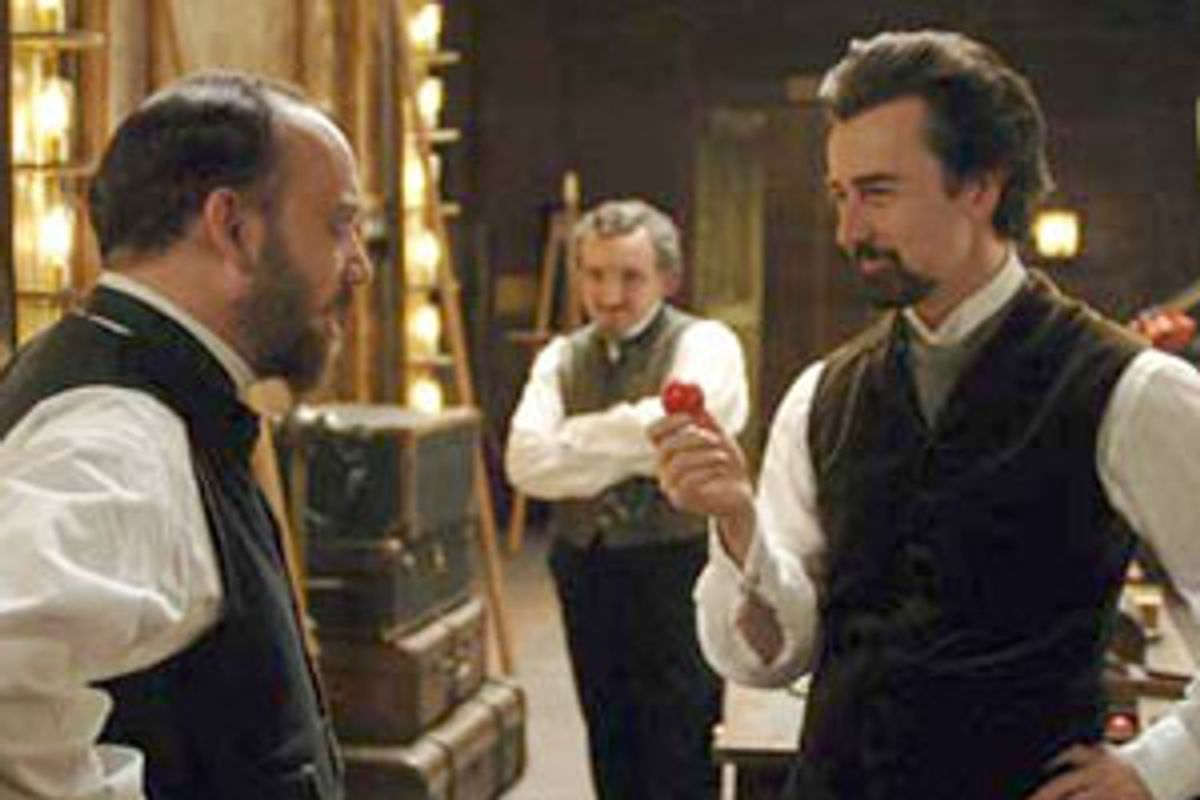 Sometimes you can be perfectly aware of everything that's wrong with a movie as you're watching it only to discover, minutes or hours or days later, that the look and the mood of the thing have flooded in and blurred all its flaws. Neil Burger's somber fairy-tale romance "The Illusionist," adapted from a short story by Steven Millhauser, is an extremely self-conscious picture: It moves along with the utmost certainty that we'll be dazzled by it, as if enchantment were a thing that could be enforced. But in the end, "The Illusionist" got me. The picture, set in fin de siècle Vienna, Austria (and filmed in Prague, Czech Republic), is so beautiful to look at that it practically feels like a drug, a little something that you might sip from a miniature crystal glass. I have vague recollections of some of the actors' trying too hard, and of places where the story dragged like a tired peacock's tail. But ultimately, by God, I succumbed to the picture's faux-laudanum haze.

Edward Norton plays Eisenheim, an inscrutable but charming magician whose routine freely permeates the membrane dividing physics and metaphysics. On a sparsely furnished stage, dressed in a tuxedo that further elongates his reedy frame, he fiddles with an orange as he delivers a monologue about the passage of time, our inability to slow it down or speed it up. He tosses the orange into the air, and instead of plopping into his hand, it drifts down in a slow-motion free fall. He cuts the orange, steps over to a golden-brass pot filled with soil, and buries one of the seeds. As we watch, a perfectly formed miniature orange tree springs from the pot, blossoming and offering up what Eisenheim assures the audience is real fruit -- to prove it, he tosses a sample or two out to the astonished crowd.

What Eisenheim can't conjure up from a pot is his childhood love, Sophie van Teschen (as a grown-up, she's played by the almost supernaturally serene Jessica Biel). Eisenheim, a cabinetmaker's son (and, of course, a gifted sleight-of-hand artist from an early age), was considered by the duchess Sophie's family to be far beneath her station. Although the two would meet in secret through their adolescence -- the young Eisenheim makes her an ingenious wooden locket, a lozenge of wood that with one twist transforms itself into a heart, which in turn contains his picture -- they're caught by Sophie's elders and cruelly separated. Eisenheim packs up his belongings to travel the world and perfect his craft, but it's clear that no matter how many smoky secrets he learns, his memories of Sophie can never be obscured.

Eisenheim will, of course, find Sophie again, but there will be complications in the form of a heavy-lidded, ambitious Crown Prince Leopold (Rufus Sewell, who cuts fat, juicy slices of ham with his master-thespian line readings; for additional emphasis, he waves a cigarette holder à la Gloria Swanson). The prince's reluctant servant and one-man Greek chorus (he's saddled, awkwardly, with the Hansel-and-Gretel voice-over narration that frames the movie) is the city's chief inspector, Uhl (Paul Giamatti, in a sweet-natured, earnest performance), who has been charged with finding out just what Eisenheim is up to -- although he's actually more curious about how the performer gets a duo of butterflies to carry an audience member's handkerchief through the air, like demure ladies-in-waiting tending to an empress's train.

Burger (director of "Interview With the Assassin") adapted Millhauser's story himself, adding two major characters, and although the picture moves along dreamily through certain passages, there are long stretches where it feels strained and belabored -- for some reason, directors and editors often believe that a lyrical story has to move slowly, as if agility and grace were disparate qualities. And the movie's ending is falsely cheerful -- I found myself yearning for something darker.

This is a puzzle movie -- one of those pictures that are supposed to tease and trick you until the very end -- but the atmospherics are more effective than the mechanics. An eerie glow settles around the picture like a dusky mantle. The marvelously cantankerous actor-magician Ricky Jay served as one of the movie's technical consultants, and the illusions performed here, largely authentic to the period, enhance its aura of spooky wonder. In its best moments, "The Illusionist" doesn't feel simply like an old-fashioned movie (it employs some charming technical touches, like iris shots, that filmmakers rarely use anymore), but like a movie summoned up from another era. Norton gives a restrained, melancholic performance that nonetheless feels passionate at its core, and he's simply lovely to watch: With his hair swept back above his high, noble forehead and his beard trimmed to an elegant point, he's a living Modigliani, an uncanny twin to the painter's "Portrait of Leopold Zborowski."

Burger and cinematographer Dick Pope, inspired by early, experimental still-photography processes, give the movie a very fine-grained surface, as if it were covered with the same kind of tiny scratches that give old metal a warm patina. Its palette of antique greens and mossy golds are a world apart from anything we see in modern life, the colors of other people's well-worn memories. Even the production design, by Ondrej Nekvasil, is a lovely shorthand treatise on Secessionist decorative arts: The simple, swerving lines of Eisenheim's stage props capture the way the Arts and Crafts and art nouveau movements looked toward the future of art deco. And yet that may be the only sense in which "The Illusionist" looks forward: This is a movie in which the future doesn't exist -- all that matters is the misty golden halo of its own present, a vibrant city standing at the edge of a new century. Blink and it's gone. But at least the glow remains.