When a giant python in Florida tried to swallow an alligator -- and blew up! -- local pundits had a field day. But nobody's laughing at how the wayward pets are strangling the life out of the Everglades. 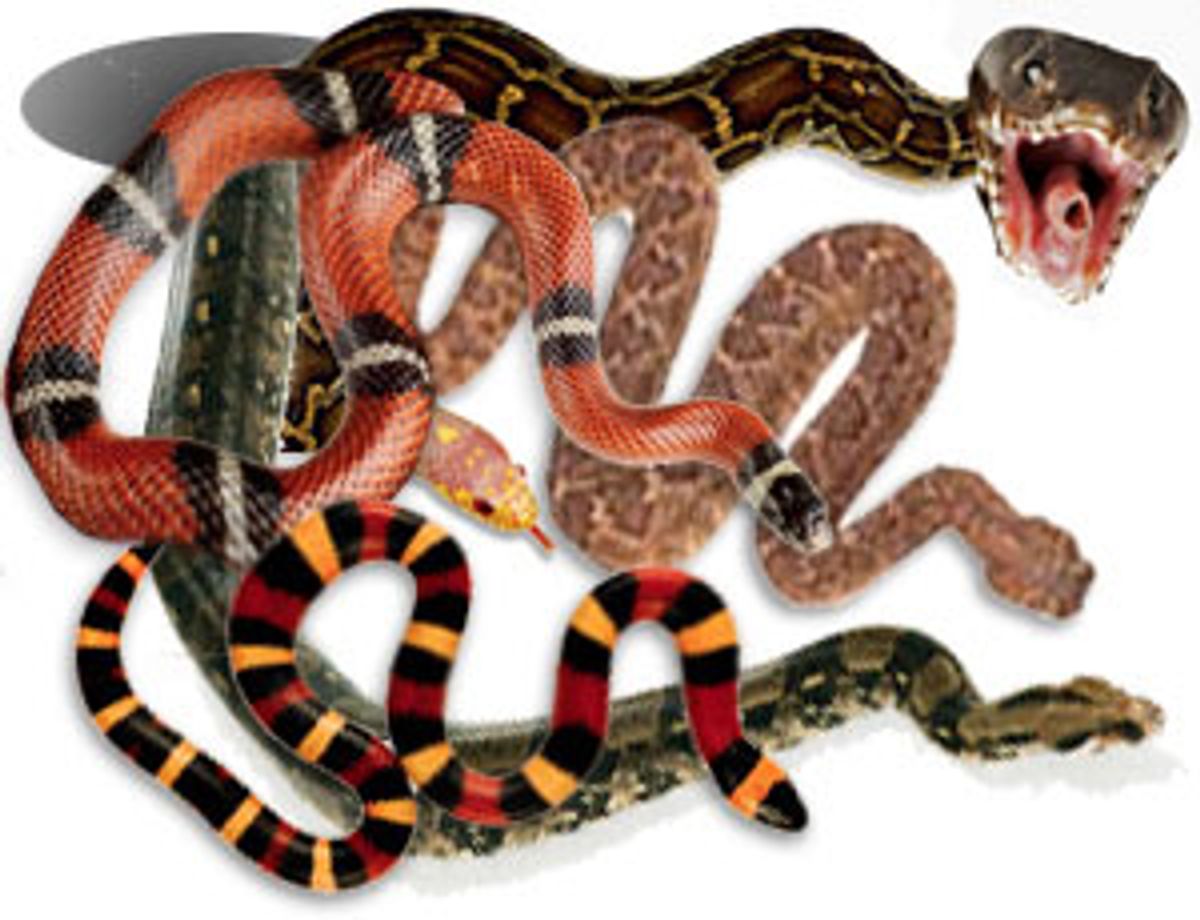 A 200-pound, 21-foot snake is not something you want to step on when working in the yard. But don't look now -- Burmese pythons of that size are turning up in southern Florida. "No humans have been attacked yet, but it's clearly a possibility," said Skip Snow, a wildlife biologist with Everglades National Park.

An estimated 1,000 to 10,000 pythons now slither freely throughout southern Florida, eating birds, rabbits, raccoons, gray squirrels and possums. But they also take on bigger prey. Last year, a state employee, checking water levels in a remote canal, discovered the aftermath of a gruesome death match: a 13-foot python literally exploded attempting to swallow a six-foot alligator. The snake's grotesquely distended body ruptured as a result of the alligator's size and kicking legs. The alligator didn't make it, either.

"Yeah, yeah, the King Kong vs. Godzilla thing is pretty funny," said Kenneth Krysko, a reptile researcher with the Florida Museum of Natural History. "But Florida wildlife is under attack."

The real problem is that Burmese pythons (aka Asian pythons) are not native to Florida. They're legal to own but are regularly abandoned in the Everglades by disenchanted owners, who grow wary of caring for one of the world's biggest snakes. The feral pythons are gorging themselves on unsuspecting endemic species already under stress from habitat loss and pollution. To make matters worse, pythons are just one of 130 non-native animal species crowding out local wildlife, including birds, fish, amphibians, mammals, invertebrates and reptiles. And they're all hungry.

"Florida's python infestation is a travesty," said Snow. "No one understands the scope of the problem. The park is supposed to preserve habitat for wading birds and other native species, and the last thing they need is another predator. We have endangered species in the park, like the wood stork, and pythons are known to eat them." Pythons are nonvenomous and surprise their quarry, constrict it to death, and swallow it whole. They are also nocturnal ambush predators, not something the birds are used to.

In June, I hooked up with Snow to observe the release of four wild pythons into Everglades National Park, each previously caught and implanted with two radio transmitters near the anus. The snakes would be released in the park for about four months, when the transmitters would gather biological data to gauge the extent of the infestation.

Pythons are notoriously difficult to find; dun-colored patterns of brown, black and yellow make them practically invisible, as they hide under detritus, waiting to strike. Snow and his team of researchers, working in pairs, wait by roadsides at dusk, when the pythons bask on the warm pavement; trained dogs have also been used to sniff them out. The researchers then nab the snakes with towels or "snake sticks" -- modified poles with a pincher at the end -- pin down the heads to tame the jaws and pick up the body.

In 2005, 95 Burmese pythons were killed in Everglades National Park (mostly discovered as road kill), compared with only 34 the previous year. This year is on pace to top 100. As Burmese pythons can live 25 to 30 years and lay clutches of about 20 eggs annually, Florida has one serious snake problem on its hands.

Standing with Snow and four other researchers in a sweltering sea of high grass adjacent to the park, I was astonished by the size of the pythons. The biggest of the four was 15 feet long and weighed over 100 pounds. Its midsection was the diameter of a dinner plate and it took three people to extract it from a large rubber crate -- one at the head to hold the jaws shut and two to support the droopy body. We carried it to a field and deposited the python into a pile of its own coils. The gigantic snake remained docile, yet I felt like a field mouse locked into its blank stare as we slowly backpedaled away.

Snow can vouch that pythons are not afraid to tackle any meal. He was one of the first people on the scene to witness the exploded python and its half-eaten alligator. "Not a pretty sight," he remembered. "That was one ambitious snake."

Thanks to southern Florida's mild temperatures, a culture of exotic-pet ownership prospers, and a menagerie of non-native, tropical reptiles are bred and sold in local pet stores -- everything from iguanas and geckos to monitor lizards (also creeping in the wilds thanks to overwhelmed pet owners). The U.S. has imported more than 150,000 Burmese pythons since 1998; hatchlings go for about $20.

Pythons express "indeterminate growth," meaning that they never stop expanding in size and weight if given enough food and space. This rapid growth can be exciting to budding herpetologists, as can feeding the snakes live rabbits and chickens. After two years, though, Burmese pythons can measure eight to 10 feet in length, and not everyone possesses the mix of dedication and skill it takes to house large predators. In fact, there are numerous cases in the U.S. of constrictor snakes, including Burmese pythons, killing their owners.

In the field, Michael Dorcas, a big-bellied biology professor from Davidson College in North Carolina, inspected one large snake and noticed that it had managed to expel one of its radio transmitters. To reinsert it, Dorcas dug into his gear to fish out sterile sutures. Operating outdoors on an angry snake is not ideal under any condition, much less on the tailgate of a truck in 90-degree heat, with a June sun piercing your neck. It wasn't long before Dorcas was sweating profusely and swatting mosquitoes, his fingers slipping as he tried to puncture the snake's tough skin. Despite his fogging eyeglasses, Dorcas finally succeeded in closing the snake back up, but not before it defecated a creamy ooze all over itself and the tailgate.

The transmitters constantly record the snake's body temperature, which when compared with the ambient temperature helps researchers identify the habitats the reptiles are drawn to, when and how often, what they eat, and when the females lay eggs. With this data, Everglades National Park will decide on a management plan, expected to include development of an effective trap, in-school public education, laws restricting the sale of exotic pets, and continued euthanasia. Currently the park distributes bumper stickers that read, "Don't let it loose: be a responsible pet owner."

"Catching people red-handed as they release snakes is practically impossible," said Scott Hardin, exotic species coordinator for the Florida Fish and Wildlife Conservation Commission, the government agency charged with maintaining the health of Florida's ecosystems. "Banning exotic-pet ownership entirely would only aggravate the problem and drive it underground. We want to keep everything in the open and educate people about the potential dangers to wildlife."

Officials are discussing a statewide ad campaign to discourage impulse buyers. Hardin also claims that by 2007, Florida will have instituted "an adoptive program" that would allow people to donate unwanted exotic snakes to new owners. But both proposals miss the fact that abandoned snakes are no longer the main problem; the pythons are now breeding freely in the wild.

Florida wildlife officials did have one other promising idea: Perhaps the state's alligators would prey on the pythons and help restore balance to the besieged ecosystem. After all, an estimated 1 million alligators live in Florida's waterways, with over 6,000 "problem alligators" requiring relocation each year. (Alligators have killed three Florida residents so far in 2006 alone.) But as Frank Mazzotti, a University of Florida wildlife professor, recently told the Associated Press, that idea doesn't seem so bright now. "There had been some hope that alligators can control Burmese pythons," he said. "The [exploded python] indicates to me it's going to be an even draw."

Philip Armour is a freelance writer in Miami and a former editor at Outside magazine.