"Snakes on a Plane"

The most anticipated movie of the summer is finally here. Does it live up to its name? 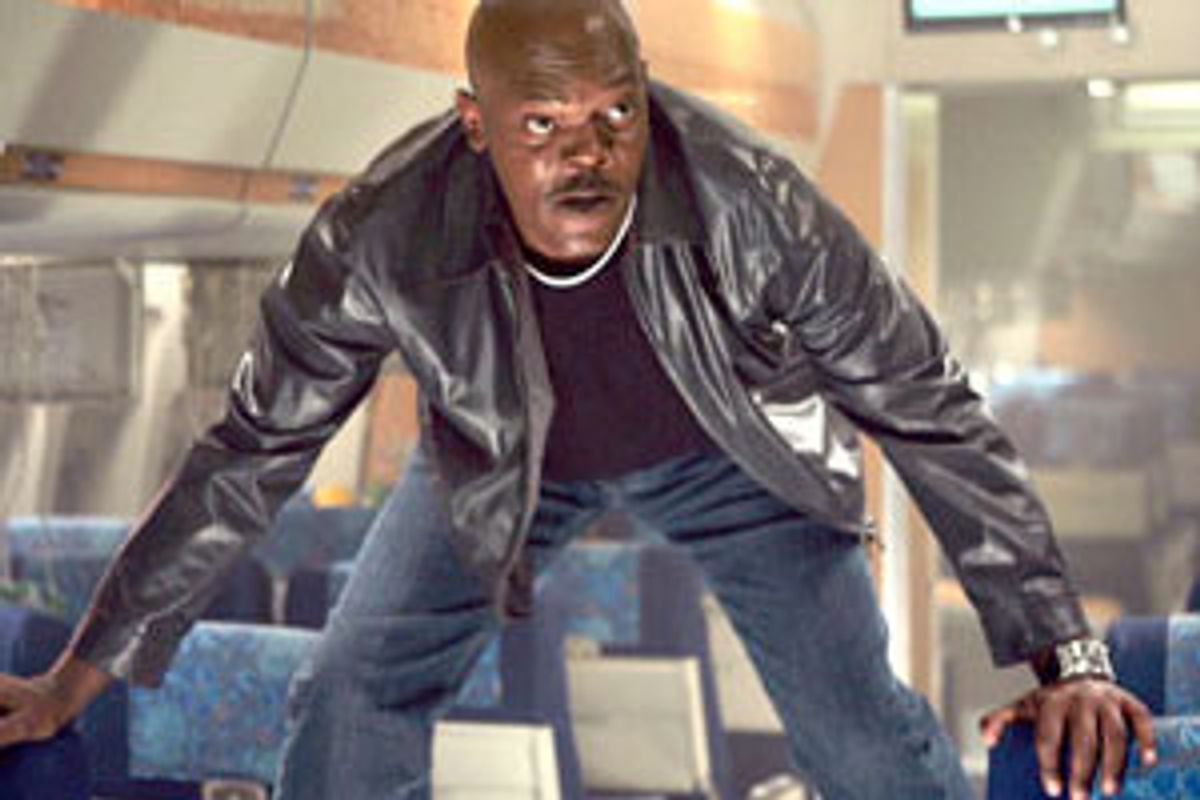 Snakes jabbing through eye sockets. Snakes wriggling underneath muumuus. Snakes biting boobs and penises. You'll see all of this and more in the most anticipated movie of the summer, "Snakes on a Plane," and whether the picture is truly entertaining is beside the point: It seems that nearly everyone who still goes to the movies (as opposed to those who just wait for things to show up on DVD) feels he or she has an ownership stake in "Snakes on a Plane." For months now, moviegoers have been tickled by both the absurdity of the title and its blunt descriptiveness, and we've had a ball trying to imagine what a movie called "Snakes on a Plane" might be like. Who needs marketing when the title of a movie alone is a parlor game of the imagination?

The expectation, I think, was that "Snakes on a Plane" would be a good bad movie, a picture that would free us from having to worry about quality and allow us to concentrate solely on dumb thrills and laughs. But it takes a degree of skill to make a good bad movie. And "Snakes on a Plane" never even allows itself to be truly dumb. The picture feels like a stunt, an exercise; it's winking and knowing every minute. This is a self-parody of a concept that's essentially beyond parody, a joke we're all in on to the point where it really doesn't matter whether we've seen the movie at all.

I saw one of the first showings of "Snakes on a Plane" on Thursday evening in a multiplex in Times Square (it wasn't screened for critics), and the only thing I truly loved about it was the excitement of the audience beforehand. We booed during a preview for some dumb-looking Denzel Washington thing; we cheered for the trailer of Craig Brewer's truly weird-looking "Black Snake Moan" (which, like "Snakes," stars Samuel L. Jackson). When we became restless after too many trailers, a soft hissing noise filled the theater, a boo that was actually a cheer. Time to bring on the motherfucking snakes! I'd urge anyone who's even remotely interested in "Snakes on a Plane" to see it this weekend, when the curiosity level will be at its highest, and with the biggest, rowdiest audience you can find. Because while "Snakes on a Plane" barely stands up as a movie, it definitely qualifies as an event. A fellow critic present at the same showing said that afterward, he couldn't quite tell if the crowd actually liked the picture. But everyone sure liked being there.

So what actually happens in a movie called "Snakes on a Plane"? Samuel L. Jackson plays an FBI agent escorting a surfer guy (Nathan Phillips) on a flight from Hawaii to Los Angeles, where the kid is going to testify against a gang leader (Byron Lawson) who's been doing bad stuff. Unbeknownst to everyone on the plane -- including flight attendant Julianna Margulies and a gaggle of random characters from honeymoon couples to mom-and-baby duos to cute kids traveling alone for the first time -- the baddie has stowed a bunch of poisonous snakes, from all corners of the world, in the hold. When the moment is right, these reptiles will burst from their hiding place (behind stacks of boxes of fragrant leis) and, hepped up on pheromones that have been piped into the air, will attack ruthlessly. Just because.

There are a few great visual moments here, as when the plane's oxygen masks pop out of their panels unexpectedly and dozens of slithery reptiles drop down with them. And there are a few great shots from the point of view of the snakes eyeing their prey through a funky green haze. (William Castle might have called it "Snake-O-Vision.") Mostly, though, nothing in "Snakes on a Plane" is as cleverly shot as it ought to be. The picture doesn't even look conscientiously cheesy: It's simply as if someone decided, somewhere along the way, that with a title like that, the look of the thing just didn't matter.

"With a title like that" is the key phrase here. The director, David R. Ellis, actually knows how to make an enjoyable B-movie: He directed the extremely energy-efficient thriller "Cellular." But with a title like "Snakes on a Plane," you don't really need a script, or a sharp eye, or even a sense of humor -- and so no one seems to have bothered worrying about any of those things. The picture is sometimes funny, in an elbow-jabbing way, and yet it's essentially humorless: There's no wit to the way the snake attacks are presented, and the movie breaks faith with the audience by killing off a cat, a Chihuahua and the sweet honeymoon couple, just for kicks. (At one point, it looks as if the Chihuahua, a spoiled little thing named Mary Kate, is going to be the hero of the day, which is just the sort of goofy touch the movie needs.)

Jackson seems to have a better idea than the filmmakers of what the movie should be: He prowls through it, delivering his most ridiculous lines with such cranked-up seriousness that you can't help laughing at him. And you desperately want to laugh at him -- he embodies the spirit of the movie we wanted to see, as opposed to the one we've gotten. Now that we finally have the chance to find out what "Snakes on a Plane" is really like, the big question is: If we're disappointed, does that reflect badly on us, for having expected so much? Or does the blame lie with the studio, New Line, and the filmmakers, for giving us only what they think we want to see? "Snakes on a Plane" could have been great, good-bad fun. All it had to do was live up to its name.