Battle of the blondes 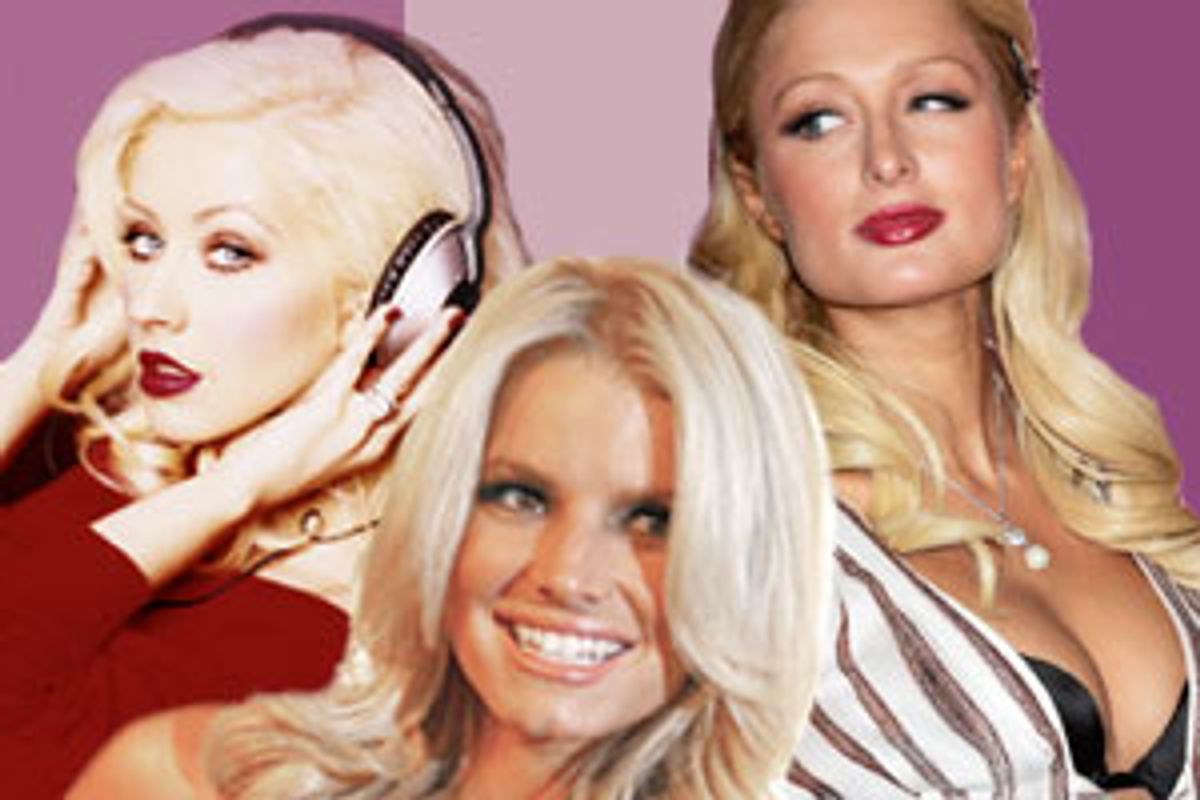 This raises questions: How do we tell them apart? And, for that matter, how do we know that any of them aren't Ashlee Simpson?

All three "singers" are "blonde." At least two have had nose jobs, and at least two have had breast enhancements. Two are more famous for having sex than they are for singing. One is more famous than the other two for urinating in taxicabs because she dislikes public restrooms. And none of them are Ashlee Simpson -- but, squinting with both eyes and ears until only the clap track, white head and boobies are apparent ... can it really be said that any of them are actually not Ashlee Simpson?

Lastly, why does this locustlike proliferation of blondes seem to somehow be ... a Republican plot?

Conventional beauty has long been attainable for anyone willing to throw enough time, effort and cash at it. If there is one thing we have learned from great Hollywood makeup artists like the late Kevyn Aucoin, just about anyone without severe craniofacial deformities can look TV sexy with enough lighting, spackle, tweezing and shellac, if they are properly blow-dried and in a comely mood. Add D cups, rhinoplasty and peroxide, and the world is your birthday pony.

If the advent of J.Lo taught us anything, it was that Madonna was no anomaly: If you can shake your bon-bon with enough Will to Power, it is entirely unnecessary for a pop star to be able to sing. With enough audio pancake concealer, multiple track layerings, a loose reverb wrist, 130 beats per minute and a sweaty cleavage video, the ordinary bleatings of any leaky sex doll can become a virtual cash cow of spring-break anthems.

Of the three blondes in question, Christina Aguilera should probably be eliminated first in terms of Ashlee interchangeability, mostly because:

1. She is a serious and talented musician, and
2. She's black now.

Xtina, with last Tuesday's release of her "Back to Basics" album, is now officially the blackest nonblack blonde in town, Mariah Carey and Beyoncé notwithstanding.

Xtina, if not a Southern Baptist in practice, certainly has that epileptic Pentacostal spirit and packs so much wailing melisma into her new tracks as to evoke Aretha Franklin standing on a mythical cliff at dawn, calling all the world's gospel soloists to swim toward her that she might lead them to safety.

Her "Ain't No Other Man" single (in English and Ebonic) is thought to be dirrty grrl Aguilera's comeback after the four years of relative obscurity since her last album, "Stripped" (2002).

It's been an interesting last four years for blondes with breasts in the pop world during the rise of Bush. Some female recording artists with audiences containing large numbers of red-state tweens -- (that is, nearly all major female pop artists) -- found it smart to pander to groups like the Silver Ring Thing, or SRT -- a Christian outreach organization that, with the help of more than $1 million in government money from the federal faith-based initiatives program, threw concerts and gave silver rings to youths who vowed chastity and/or abstinence until marriage. Xtina, in her brazen-hussy phase, was distastefully regarded by many young CD-buying Christians -- some from teen "studies" conducted by SRT -- as "giving it away for free."

Xtina laid down her assless chaps in 2004 to interview SRT members at its national headquarters for an MTV documentary, ostensibly to pay lip service to chastity. (In 2005, the ACLU, peeved that SRT was blatantly using tax dollars to promote Christianity, sued the U.S. Department of Health and Human Services, and SRT's funding was suspended -- though they've promised to continue spreading their message.)

In any case, SRT's ugly mark of sexual conservatism is upon the pop world: Xtina married young, just like Britney Spears, Jessica Simpson, Avril Lavigne, and Pink -- and the libertinage of this generation's female rock stars seems effectively circumcised.

Aguilera has admitted that she "cleaned up" her act for this new album. There are, ostensibly, some God-fearing songs: "Makes Me Wanna Pray" takes an old piano track from Traffic's "Feelin' Alright" and makes what sounds like a large Bronx choir hustle for Jesus in the pews behind it. "Oh Mother" gives weepy R&B artist Mary J. Blige a run for her money in the BET soap opera lyric department. But to answer those who may suspect she sold out her cookies to aid in repressive political sexual engineering, Xtina released a song on Aug. 12 called "Still Dirrty."

I still got the nasty in me
Still got that dirrty beat...

SRT may have lost its federal canine molars, but still, one cannot help but feel it is a shame that an actually talented recording artist ever felt enough painful market pressure to go "clean" in the first place.

Jessica Simpson, on the other hand, required no such double spin. A Baptist in the Britney Spears mold of popdom, Jessica, who received a silver chastity ring from her father when she was 12, was a public virgin until her (now defunct) marriage to Nick Lachey. (MTV, thankfully, excused us from viewing the bloody sheet after her wedding night.) This was the groundwork to launch a chirpy, production-dependent singing voice that falls somewhere between the range of early Paula Abdul and Malibu Barbie.

Jessica Simpson's music is as indistinguishable from other pop dance music as Hugh Hefner's blonde girlfriends are from each other. Her upcoming release, "Public Affair," multi-layers her condom-thin voice over proto-Madonna Jellybean Benitez-style riffs, and evokes the tinselly, cocaine-and-synthesizer snow-globe hyperproduction sound of the more repellent latter-day Stevie Wonder albums. "Fired Up" seems to be made for the Tokyo Drift crowd -- a lowrider-ready, bouncing Miami jam made for blacklight and blue Curaçao -- as catchy a hypoglycemic buzz as it is a forgettable headache.

Jessica, according to her father, "loves the heck out of" President Bush, and continues to thrive, despite her recent divorce and obvious lack of virginity.

Which brings us to Paris.

What is nice about Paris Hilton is that there isn't anything nice about Paris Hilton. She's never been a virgin, and never claimed to have any kind of redeeming talent or value whatsoever beyond extreme wealth and an enviable shamelessness. Paris is much too successful a public disgrace to need administrative approval.

Yet everything Paris touches is so frankly commercial and perfectly liteweight as to be fashionably anorexic, and therefore attractive, in spirit.

In truth, Paris' album, "Paris," (out next week) doesn't suck half as much as it ought to -- it shoots really low and hits its big stupid target just fine. If, in order to win, all bowling balls merely needed to end up in the gutter, the Paris Hilton LP would be the equivalent of Queen's "We Are the Champions."

All the songs are pleasantly idiotic -- instant karaoke beach trash classics sung in a breathy Laahhhh laaahhhhh lollipop-in-Lolita baby voice, over a production that sounds like Disney's twin tweens Zach and Cody trying to get Pharrell feral over a copy of Garage Band.

One of the prettier songs, "Jealousy," while being an obvious "fuck you" to Nicole Richie, actually betrays ... dare I say ... a little bit of soul, even -- a perfectly unnecessary element, to be sure, but a nice bonus.

If Hugh Hefner's girlfriends all became Ashlee Simpson and cranked out interchangeable clap-track claptrap for the sake of reclaimed Republican virgins everywhere, at least we'll always have Paris to lead us back into the gutter where pop truly belongs. Xtina may be reclaiming her dirrt, but Paris -- like the city of love -- has always been filthy. Let's hope her recently announced "year of celibacy" isn't due to anything more than boy-binge burnout -- sexual mendacity, after all, is best left to the politicians. We can only hope this healthy return to raunch isn't a mirage. Breasts, after all, are manufactured to be enjoyed, and rock star blondes are supposed to Have More Fun with them.