Watching Spike Lee's four-hour epic on Hurricane Katrina in the New Orleans Arena with my neighbors, I felt awed, exhausted and heartbroken -- and more convinced than ever that somebody should go to jail for what happened here. 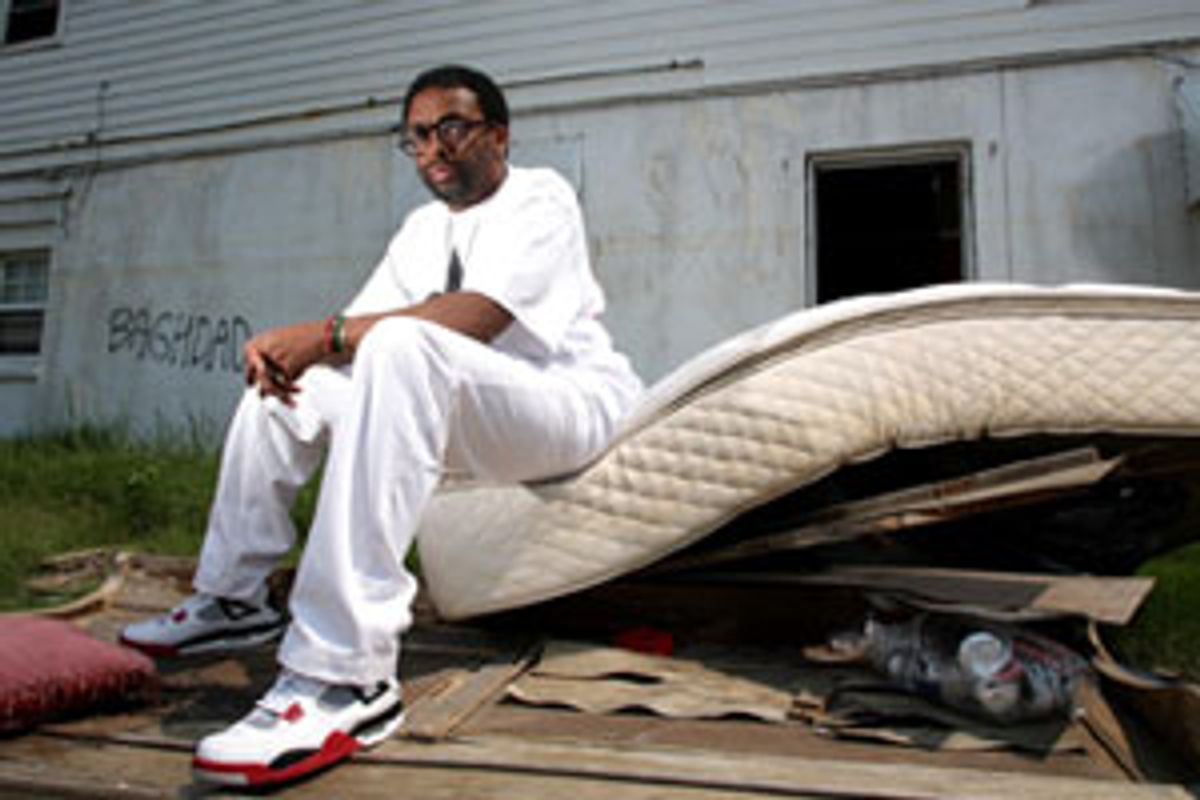 People had been talking for weeks about how the New Orleans premiere of Spike Lee's much anticipated Hurricane Katrina documentary, "When the Levees Broke," was sold out, so it was a little eerie when we arrived at New Orleans Arena Wednesday night to find that fewer than half of the 14,000 who'd reportedly snatched up the free tickets actually showed up for the event. Maybe they'd heard there would be no alcohol sold in the arena. Certainly Lee's ambitious film -- sweeping in its scope, emotionally intense and a challenge to watch in one sitting -- could drive just about anyone to drink. It's also possible that all those people who didn't show up don't live here anymore. The new New Orleans can be a pretty lonely town sometimes.

Which is partly why watching a Katrina documentary with thousands of other local residents -- certain to be a gut-wrenching experience -- also carried with it the possibility of catharsis. All summer long, apprehension about the first anniversary of "The Storm" (First? Really? Why does everyone look 10 years older already?) has been steadily building. With so many people still assessing their losses, coming up with a meaningful commemoration can be difficult. I know that 11 months ago I would never have predicted that I might be sitting in the arena across the street from the Superdome -- eating nachos, no less -- eager to watch more footage of what I thought I'd witnessed too much of already.

Lee kept his introductory comments brief, thanking the audience for the opportunity to tell their story. He encouraged people to laugh at the funny parts. Given how common inexplicable weeping spells are around here (as I write this from my neighborhood coffee shop, there is a man next to me reading his e-mail and sobbing intermittently -- I don't even ask anymore) everyone seemed relieved to hear that there would be funny parts, even if they did turn out to be few and far between.

Lee has frequently stated that at four hours  apparently the longest running time ever for an HBO original movie -- "Levees" is still not long enough, nor complete, and he's right. But through hundreds of interviews, "Levees" admirably covers an entire spectrum of events and circumstances. Starting with Katrina's landfall and the flooding from levee breaks, Lee moves quickly into the rapid spread of conspiracy theories and the government's refusal to address them. We see familiar footage of the botched evacuation, as Americans became refugees in their own country, and witness, again, how it was the inaction of elected leaders, not bad weather, that led to the subsequent breakdown of their lives.

Lee also addresses every major aspect of the storm's aftermath, from insurance fraud to mental health breakdowns to the Army Corps' admissions of error to life in FEMA trailers ("I've got water, but no electricity," says one interviewee, even though it's now months after the storm. When Lee asks her when she thinks she might have power, she says, point-blank, "I guess when I decide to give somebody a blow job"). The result is a sort of Cliffs Notes to Hurricane Katrina, Volume 1, and though the subject is dense, the conclusions drawn are as simple and straightforward as Kanye West's "George Bush doesn't like black people" comment (which also gets full treatment here): Louisiana needs to stop being an oil colony for the rest of the country. And, oh yeah -- somebody ought to go to jail over this.

On the day of the premiere, Times-Picayune television critic Dave Walker wrote that "Levees," while frequently brilliant, didn't tell the whole story. "Those who were here know that, in virtually every way, Katrina was an indiscriminate storm that killed and destroyed without regard to ethnicity or economic condition. That is not the impression that the nation received watching coverage of the immediate aftermath of the storm, nor the one viewers will take away from Lee's documentary."

Lee's intention wasn't to make "Levees" the document of record for just the black experience (lots of whites weigh in here as well), but for the death of what was a mostly black American city. There's no other director who would have even attempted to do that so thoroughly. So what if he interviews CNN's Soledad O'Brien (her replayed eviscerations of then FEMA chief Mike Brown won lengthy applause from the arena audience) but not Anderson Cooper, and Wynton Marsalis but not Harry Connick Jr., or for that matter the Rev. Al Sharpton but not the Rev. Billy Graham? Those were valid choices, not oversights, and when most reports from New Orleans over the last year reflexively equated black with poor, a film like "Levees" provides some much-needed balance by portraying many members of New Orleans' often overlooked black middle and professional classes.

"Levees" establishes early on, for instance, that it wasn't just poor blacks who chose not to evacuate -- prominent local luminaries like actor Wendell Pierce (of "The Wire") and jazz musician Donald Harrison Jr. both talk about how hard it is to get New Orleanians to leave town. When Pierce says "New Orleans people, we don't venture very far," he's just stating the facts, not offering an explanation.

For the most part, Lee adheres to a standard documentary format -- interviews strung together with recent news clips and archival footage -- and his stylistic trademarks are employed only sparingly here. But there's no narration here, although we hear his voice off-camera, prompting his subjects to answer what are often painful, intimate questions. It's not necessarily the drama inherent in these stories that moved some to tears -- and it's possible that some audiences won't recognize the restraint Lee exercised in rendering them -- it's the heartbreaking matter-of-factness with which they're being retold.

A Ninth Ward resident talks about seeing his dead neighbor floating in the water for days and remarks how "he was all blown up." Herbert Freeman Jr. tells us how he sat outside the Ernest N. Morial Convention Center with his elderly mother in the heat with no water for days while waiting for buses that took too long arrive. "She was asking me questions like every five, 10 minutes, and then I noticed she had nodded off." When a soldier ordered him at gunpoint onto the bus that finally came, he was forced to leave his mother's body behind with only a handwritten note identifying her. "I had to pray for my own salvation," he says, and his voice never once breaks -- but his face shows a man who still can't believe that was the choice he had to make.

The tedium of tragedy has prevailed here for so long now that many people are saturated emotionally. But twice during the premiere, dozens of people filed out of the arena as if on some emotional-overload cue -- one time after we witness the funeral of a 5-year-old girl who drowned, and another after a wordless photo montage set to haunting chamber music shows scores of dead bodies, some slumped over and dried out, others floating by, bloated and with eyes bulging. One photo even shows a body being eaten by wild dogs. When you remember that one of the photographers who captured some of those images recently snapped, you don't wonder why -- you just wonder why more people haven't.

Lee gives his subjects full rein to teasingly discuss Kanye West's outburst, and it's the only funny part of the film that leaves no bitter aftertaste. At first, West maintains his bravado -- "If you don't want me to say what I feel, then don't put me in front of the camera" -- but moments later, he admits how scared he was. "I was like, 'Oh shit.' I thought the CIA might come take me away." And Mayor Ray Nagin is even more macho than usual here, boasting about taking a longer shower than was probably polite in the president's "pimpmobile," otherwise known as Air Force One. The arena crowd hissed anytime President Bush's name was mentioned.

The mock second line funeral of a "Katrina" casket at the end was meant to provide closure, and it was a nice gesture. But on our way out of the New Orleans Arena, as we looked down to see the train depot where prisoners had been kept in makeshift cages after the storm, the central post office where some people still have to pick up their mail, and the dents where flying debris had struck the side of the now mostly repaired Superdome, I'm not sure closure was what people felt. It was now after midnight, and this crowd was tired. When a white kid with dreadlocks, one of many freelance vigilantes who flocked here after the storm, started chanting, "You've seen the film, now it's time to do something!" a lady in front of me harrumphed back at him, "Yeah? Why don't you do something -- like build us a levee."

"When the Levees Broke: A Requiem in Four Acts" will air in two two-hour segments on HBO on Monday and Tuesday nights. It also will be shown in its entirety Aug. 29, the one-year anniversary of Katrina's landfall.