The crazy character of this wondrous land shines in the poems of Pablo Neruda, while its strife under Pinochet is captured best by Jos 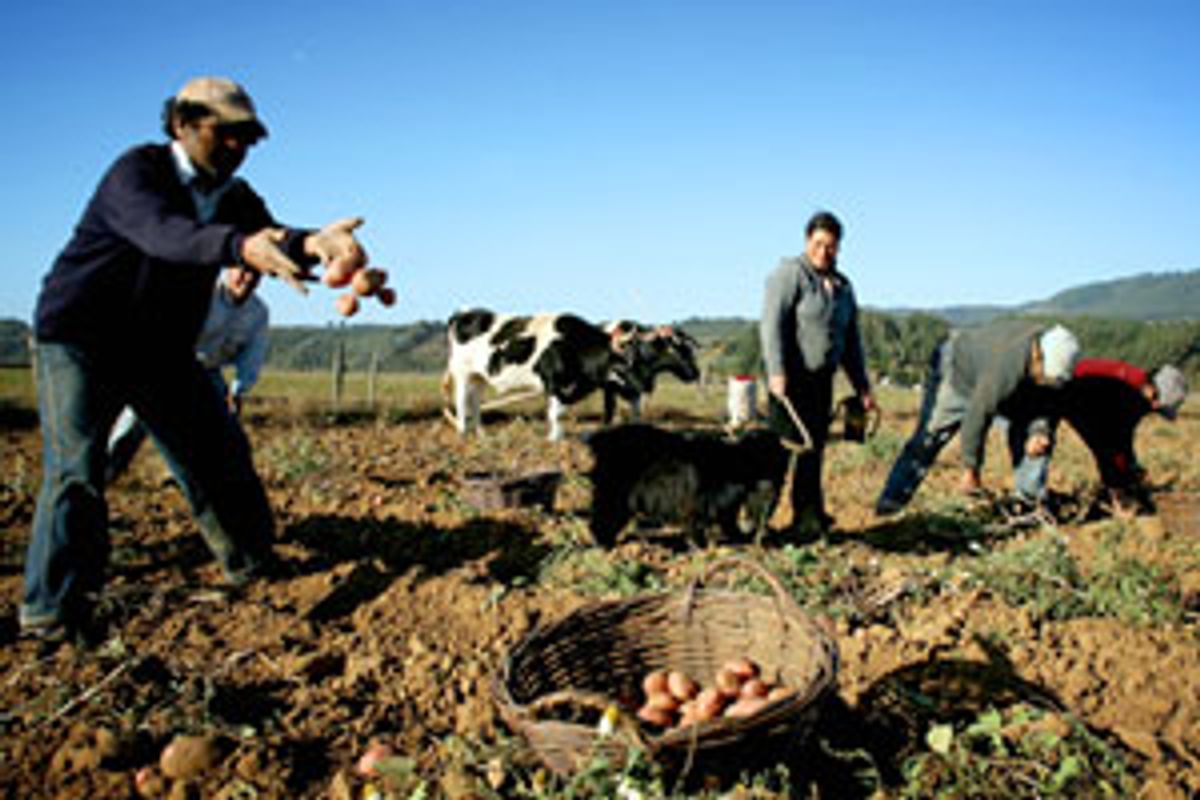 That is how Chile was described to me almost as soon as I arrived on its shores in 1954, a 12-year-old Argentine boy who was to fall in love with that country and make it his own. "Una loca geografía" was, in fact, the title of a 1943 book (translated as "A Geographic Extravaganza" in the U.S. and which I cannot, alas, recommend because it has long been out of print) that friends of my parents kept foisting on me as a gift. The real gift, of course, was that wondrous land itself, which stretches from the stormy Straits of Magellan, up through Patagonia and the fiords, and then through an exuberant volcanic lake district with rivers the color of emeralds under the sun. And farther north are rolling semi-arid hills and verdant vine-clogged valley, leading on and on northward into the driest desert of the world.

A country not quite like any other: thousands of miles long and never more than a few hundred miles wide, isolated from the outside world by the cordillera de los Andes to the east and the most turbulent ocean on this planet, ironically called the Pacific, roaring to the west. As if Norway and the Gobi, Oregon and Italy, the Alps and Nantucket, had been compressed into one small nation, a land that doesn't fit into a novel, a land that demands the delirium of poetry. No wonder Chile is known as "un país de poetas."

A land of poets.

Starting, of course, with Neruda. The winner of the Nobel Prize in 1971 and one of the greatest poets ever to use the Spanish language, Pablo Neruda is so crucial to understanding his country that I was tempted to forgo other books and propose five different volumes of his verse for the traveler attempting to explore Chile. Because Neruda's poetry is as overwhelming, variegated, exhaustive, dangerously intimate and furiously diverse as Chile itself. Probably the best anthology is "The Poetry of Pablo Neruda" (2003), edited by Ilan Stavans, though I believe "Selected Odes" (1990) provides an easier induction.

Neruda celebrated everything he could wrap his words around, and the reader will find tributes to the birds of Chile and the Southern Cross, to Valparaiso and to the Moon on the Sea, so that you could well wander around that territory and stop in front of any object and find how the poet described it, rocks and wood and grandfather clocks. And as one of the fabulous delights of any country is its food, why not let Neruda help you taste the "irate fragrance" and "the clear water released from the light of onions" of the conger chowder, or allow him to initiate you into the "fiery color and cool completeness" of the tomatoes (you have never really experienced a tomato until you have had the juice of that Chilean delicacy run down your face). But don't stop there, go on to the artichoke and the lemon and the wine, oh yes, "soft as lascivious velvet."

If you haven't had enough of Neruda, then you can discover him again as a character in Antonio Skármeta's masterful "The Postman" (1985), where the illustrious bard befriends the eponymous postman of the title and teaches him how to woo an elusive damsel with metaphors and a pinch of politics. This novel not only will enchant and entertain readers (I like it more than the 1994 film, "Il Postino," that it inspired) but also will offer a glimpse of Chileans' peculiar sense of humor, corrosive and light, self-deprecating and ferocious.

That sense of humor is also present in "Chile: A Traveler's Literary Companion" (2003), though what distinguishes this excellent anthology of short fiction edited by Katherine Silver is that each selection by many stalwarts of Chilean literature opens a vista onto a distinctive zone of Chile: Read Francisco Coloane, for instance, on the seas off Patagonia (where Herman Melville set Ahab's quest for Moby-Dick) or Hernan Rivera Letelier and Roberto Ampuero on the haunted inhabitants of the northern deserts. Or Marta Brunet's terrifying "Black Bird" and its suggestion that Chilean nature is not always as benevolent or glorious as I have implied.

Indeed, every country has its dark side, and no voyager, real or imaginary, should ignore what lurks under the welcoming surface. And there is probably no better guide to that ominous undertow than Chile's preeminent 20th century narrator, José Donoso. More accessible than his labyrinthine masterpiece, "Obscene Bird of Night" (1973) (where, among other niceties, a child's eyes and ears and other orifices are being sewn shut by witches), is "A House in the Country" (1984). Through a sprawling family saga of masters and servants and rebellious daughters, Donoso weaves a secret history of Chile's turbulent past and uncovers the sources of my country's recent violence, the dictatorship for which we have become sadly notorious.

The Pinochet years have, in fact, spawned a plethora of incisive books. If I had to choose one to take on a journey into the bitter heart of Chile's oppression, it would be Patricia Verdugo's "Chile, Pinochet, and the Caravan of Death" (2001). The story of the extrajudicial execution of a group of prisoners in the north of the country is paced like a thriller, as the author, a fearless journalist, struggles to unravel not only the transgressions of the army but also the ways in which the military fruitlessly attempted to cover up its crimes.

That it should be a woman who has written this indispensable book is not that surprising. Neruda is not the only Nobel Prize winner from Chile. Gabriela Mistral with her incantatory and mystical cantos won that very award in 1945, and perhaps the best homage to her (besides reading several available anthologies) would be to take along a volume of stories by Chilean women, "What Is Secret" (1995). Though Chile's most famous female writer, Isabel Allende, is not among those selected, editor Marjorie Agosín, herself a noted author, offers an amazing array of subtle stories which remind us that Chile should not be reduced to its mountain ranges and mutinous seas, its magnificent vistas and delectable meals. What finally matters about any country is its people, the inner, equally compelling, psychological landscape of those inhabitants who built their nation and who recalcitrantly survived to tell the tale.

Books Latin America The Literary Guide To The World Travel