Head in the stars

Recently it occurred to me that I know more about the celebrities I interview than I do about my own family. But admit it -- don't you, too? 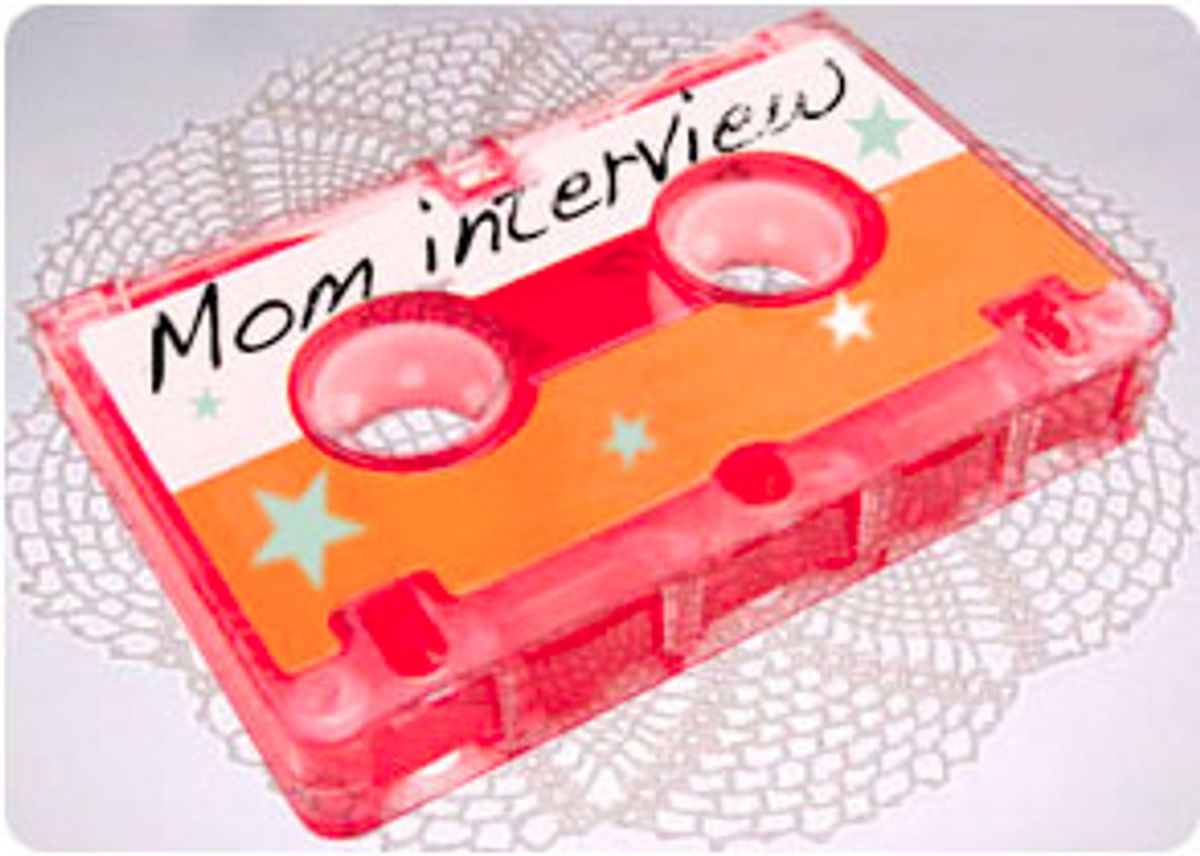 For the past 16 years, I have made my living by interviewing celebrities. During that time I have been chased by paparazzi with Ben Affleck, eaten Velveeta with Dolly Parton and hiked mountains with Brad Pitt. I've chatted with hundreds and hundreds of famous people. The days leading up to an encounter are always a typhoon of feverish preparation as I assemble a phonebook-sized dossier and pore over it, memorizing every detail of my subject's life from birth onward.

If I know every facet of a star's life and convey this in casual interjections ("If memory serves, you got a B minus on that test, yes?") then he or she will be warmer and more receptive, knowing that I Get Them. And so I approach each article as if it were a dissertation. Did you know that Mary-Kate's two horses are named CD and Star? Well, I do! Did I mention I'm 40 years old? And although my work requires me to scramble to feed the beast that is always hungry for intimate details of the glitterati, I suspect that I'm probably not alone in this regard. I've only professionalized it.

Often the information I discover is toe-curlingly personal, like my recent perusal of a Web site that exhibits a close-up photo of Katie Holmes' ropy stretch marks, post-baby Suri. My two sisters have children, and I haven't examined their stretch marks. I'm sort of vague about their kids' birthdays, too. The irony is that whether paid to, like me, or pay to, like your average cable subscriber and closeted People reader, after we inhale the endless minutiae of the famous all the livelong day -- Is Britney a good mother? Is Lindsay's career in trouble? -- the idea of doing the same thing with loved ones hardly occurs to us. Who can bother?

A chasm has opened between my personal and professional life, widening a little every year -- measured by what I know about famous strangers and what I know about those closest to me. I've had conversations with celebrities that often were startlingly more intimate than those I've had with my closest friends. Not long ago, an emotional Harry Connick Jr. talked haltingly to me about the death of his mother when he was a teenager, something I've yet to do with friends who have lost a parent. Death, drug addiction, sex: It's all fair game. For Redbook -- Redbook! -- I was instructed to ask talk show host Kelly Ripa if she and her husband used sex toys, and if so, which ones? I saved that query for last, so I could dart out quickly if a crack appeared in her cheerful demeanor. (It did: Ripa turned bright red, sputtered that she didn't use sex toys, and talked about me on the air the next morning as I did a spit take into my coffee.)

I first noticed this imbalance between what I know about celebrities and what I know about my own family after interviewing Loretta Lynn three summers ago. I had spent a giddy day with Loretta in her kitchen in Hurricane Mills, Tenn., eating bologna sandwiches ("Just take the bologna right out of the fridge yourself," she urged) and making peanut butter fudge as we talked at glorious length about her hardscrabble life as a coal miner's daughter. When the fudge hardened into little pebbles after cooking too long, Lynn just stuck two spoons in it and we ate it like cereal. It was heaven, and I told my mother about it one night in her kitchen as we were drying dishes after a family dinner.

"Get this," I said. "As a kid, Loretta used to eat fried squirrel." My mom slapped a platter onto the counter. "Well, what the hell do you think I used to eat? Dad would take a shotgun out into the woods." This amazed me. At that point in my life, why hadn't I heard that story? I knew the basic elements of my mother's early years but rarely thought to press for details. Would I be able to write my own mother's biography?

This I knew: My mother hailed from the tiny town of Citronelle, Ala. She was a former beauty queen, in fact the very first Oil Queen of Citronelle, and it was exotic for my friends in my New Jersey hometown to see the yellowing photo of Judith Ann Corners from 1960, holding a spray of roses, with a crown shaped like a little oil derrick perched gaily on top of her head. But when my mother said, "We ate squirrel plenty of times," I just stared at her.

Growing up, like most of us, I suppose, I didn't imagine my mother as having an actual personal history. To my youthful eyes, she was Source of Cash Obsessed With De-Cluttering. One way to mark adulthood is to pinpoint the moment in which you view a parent with new eyes, as an individual -- but I spent my life so immersed in the stories of celebrities that I never thought to be interested in my own mom, even at 30, when I was well beyond any sort of rebellious stage.

I could give an hourlong lecture on Loretta Lynn's background, but there were glaring gaps in my own family lore. I hadn't even been curious enough to ask the questions that I used in case of emergency, the ones that can produce a satisfying answer from the most vapid WB network starlet. So that night, I decided to try them out on my mother. "What were you thinking of as you fell asleep last night?" I asked offhandedly as we sat at the kitchen table after dinner. (Usually a star has never heard this question before, so it may jar them into actually giving a forthright answer instead of something that's rehearsed and publicist approved.)

I could tell by the way my mother poured a decaf and settled into her seat that she was pleased to be asked. "I was thinking of a girl I met when I used to volunteer at a mental hospital called Graystone," she said, after thinking a minute. "Most of the patients were in fairly good shape, so we would talk with them, or play cards, just to bring them out of themselves a bit. It was a little scary at first, but then I got used to it. The one girl I remember most was in her early 20s. She was tall, blond, blue eyed, just this really pretty girl with long blond hair, really outgoing. At first I thought she was a visitor."

My heart began thudding the way it does in interviews when I think there are a lot of good quotes here. My mother continued, "So after a few sessions, I asked an attendant why she was in there. He said she had taken some kind of drug, maybe it was LSD, and would become extremely violent, so you really had to be careful around her. I still never saw anything until one time when I was talking to her. She had been just fine when suddenly her face changed. It had this odd expression, and she started swinging her long hair back and forth across her shoulders. I asked her what she was doing, and she said, in this small voice, 'I like the way it feels when my hair brushes against those bones that are sticking up out of my back. It just feels so nice.' And she just kept swinging her hair back and forth, back and forth."

I tried another one of my stock queries, and asked her -- for the first time ever -- about her most character-building job. (This question puts stars in a good mood because it's innocuous and it gives them an opportunity to show that they have "lived.") My mom answered that when she was 13, she and her friend Jackie kept bees for her Sunday school teacher in Alabama, Mr. Henley, who wanted to capitalize on the Royal Jelly craze of the 50s. "The hives were way down in the woods, and it was summer in Alabama, so it was really hot. We had to learn how to use a smoker to lull the bees; then I'd take a little spoon into a cell of the honeycomb, scrape it into a tiny dish, cover it and give it to Mr. Henley. I think we got a half a teaspoon a day. Jackie was allergic to bees, so when she got stung, she would faint." I gawped. My mother was an eighth-grade beekeeper? This was a mite more compelling than anything Justin Timberlake had told me the week prior, when he spent much of our phone interview talking about how much he appreciated his fans.

We know everything about these phantom friends -- Britney and Nicole and "American Idol" rejects -- at the expense of archiving our own personal history. Whether we're conscious of it or not, most of us are constantly churning through an astonishing amount of information about them. In today's mobile world, the comfort of the small-town coffee klatch has been replaced by this tabloid community. Celebrities have become the cool kids in our collective high school, the ones who are envied, emulated, despised, as we talk about their exploits, chummily using their first names (Gwyneth! Jessica!). Is that curiosity simply our desire to peer over the next hedge, proof of our enduring suspicion that what is going on in a famous person's life must be more interesting than our own little units of dysfunction? Maybe. But that seems doubly ironic to me when I recall the many times that I struggled to glitz up a celebrity's unremarkable history for an article.

Granted, celebrity details may be easier to retain than the musty particulars of your grandparents' past -- especially when they're couched in a seductive sugar hit of hot-pink type and glossy photos. But don't we devalue our own lives as we reach for this empty mythology? Paparazzi are still paid handsomely for shots that were once throwaways of stars acting "just like us," getting burgers at the drive-through and picking up their dry cleaning. On long flights, it's still a joy to crack open a nice, fresh copy of Us Weekly. And I still interview the famous -- and am grateful for the work. But now I just wonder if maybe those we love don't deserve a little of our mesmerized gaze as well.

Jancee Dunn is the author of "But Enough About Me," a memoir of her work as a celebrity journalist.