Larry King's Lite-Brite needs to be turned off for good. 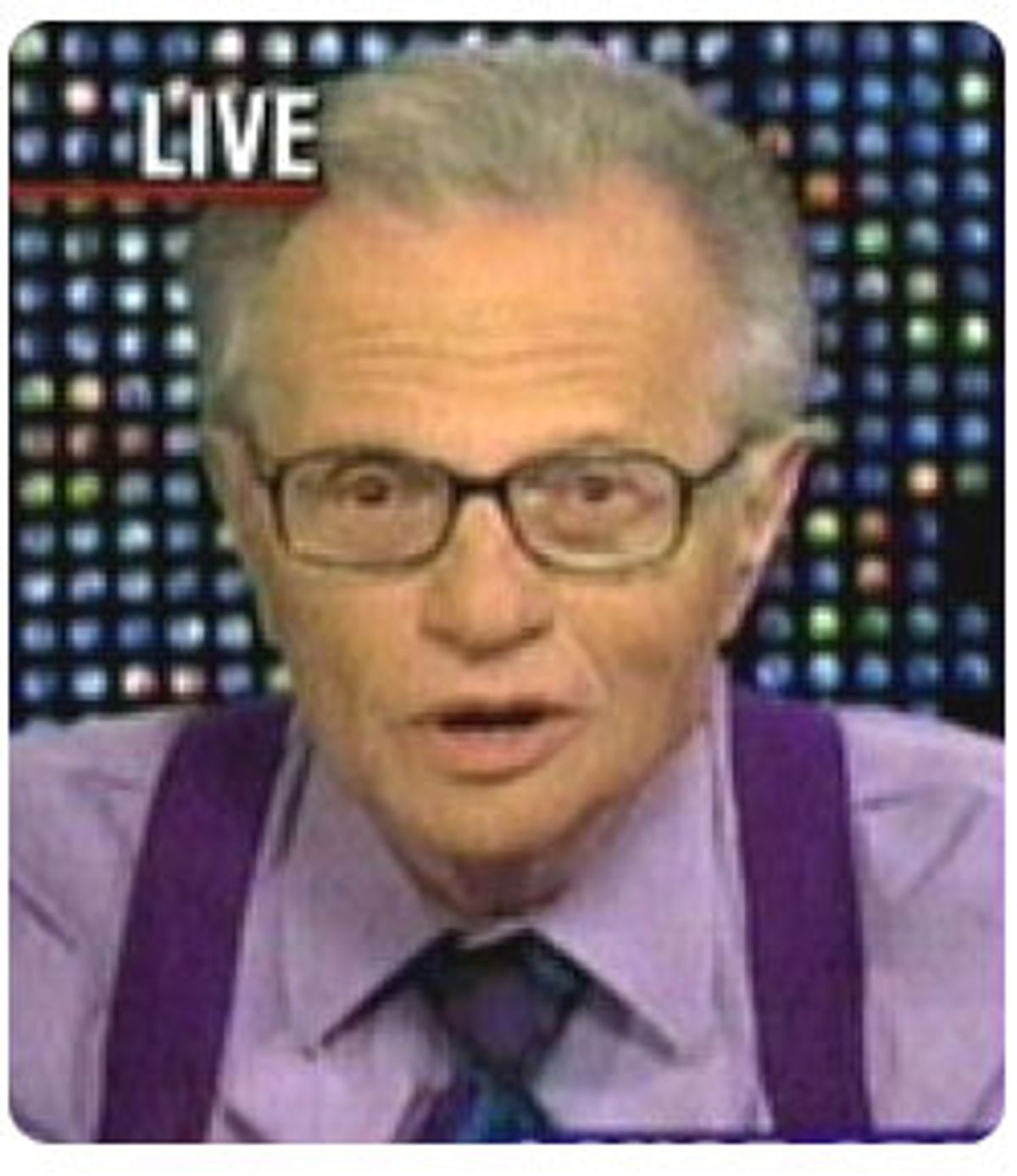 Larry King bugs the crap out of me. Look, I don't feel great about proclaiming that. In all honesty, it feels a little like beating up somebody's grandmother. But then again, nobody's grandmother I know appears before a Lite-Brite and roughly 1 million viewers every night asking interesting people the most banal questions imaginable -- and often appearing to read those questions off a card.

Of course the other reason guests go on King's show is those banal questions. Whether a guest is flogging a forthcoming movie, airing a few carefully chosen words about a divorce, defending himself in the face of a potentially career-ruining scandal or just trying to sell a war to the American people, he can be sure that Larry will keep him squarely in his comfort zone. (Heck, a guest in real trouble can even bring his mommy along.)

And even casual watchers of the show can spot several types of rotten King questions. There's the Larry King Softball Query: "Mr. President, you're into taking the lead on things. Iraq was an example. You took the lead on Iraq..." is how he began one question to President Bush when he sat down with him and Laura Bush last month. There's also the Unasked Biggie: When Tour de France winner Floyd Landis appeared on his show just after news hit that his drug test had come back positive, King neglected to ask him if he'd actually doped up. (Though he did ask Landis what testosterone could do for a cyclist, a question the Landis rightly pointed out King might better direct to the sports doctor who was also on the show that night -- call that one the Blatant Misfire.) The Simplistic Spin: "Christiane Amanpour at Heathrow, probably too early to tell, but, do we have a hero in this?" he asked the day that news of the latest terrorist plot in the U.K. broke. The Random Flattery: "We'll take a break and come back and go to your phone calls for Liza Minnelli. Her father, Vincente Minnelli, one of the great directors ever, deserves mention." And -- my favorite -- the "What the...?" Head Scratcher: At one point earlier this year, when King was trying to get guest Jon Stewart to say that he was happy when bad things happened in the world because it gave him comedic fodder, King asked, "You don't want Medicare to fail?" To which an alarmed Stewart responded, "Are you insane?"

So clearly, King's not there to outsmart his guests (as he wrote in his 2000 autobiography, "Anything Goes": "Folks, it's a talk show. It ain't rocket science"). He's not there to help the viewers at home see through any crap a guest may want to feed them (in fact, he prides himself on having removed the journalistic filter between newsmakers and the American public). But what if Larry weren't there every night? What if CNN grew irritated by his cloying routine (not to mention his bad posture, his goofy suspenders and irritating iconic microphone) and canceled him?

Well, we'd be overjoyed. We'd be thrilled. We'd be excited to welcome some slick young buck ready to ask the tough questions. Unless, of course, that person was Anderson Cooper -- or, heaven forfend, Nancy Grace.