Her popularity can only be based on the viewers' contempt. 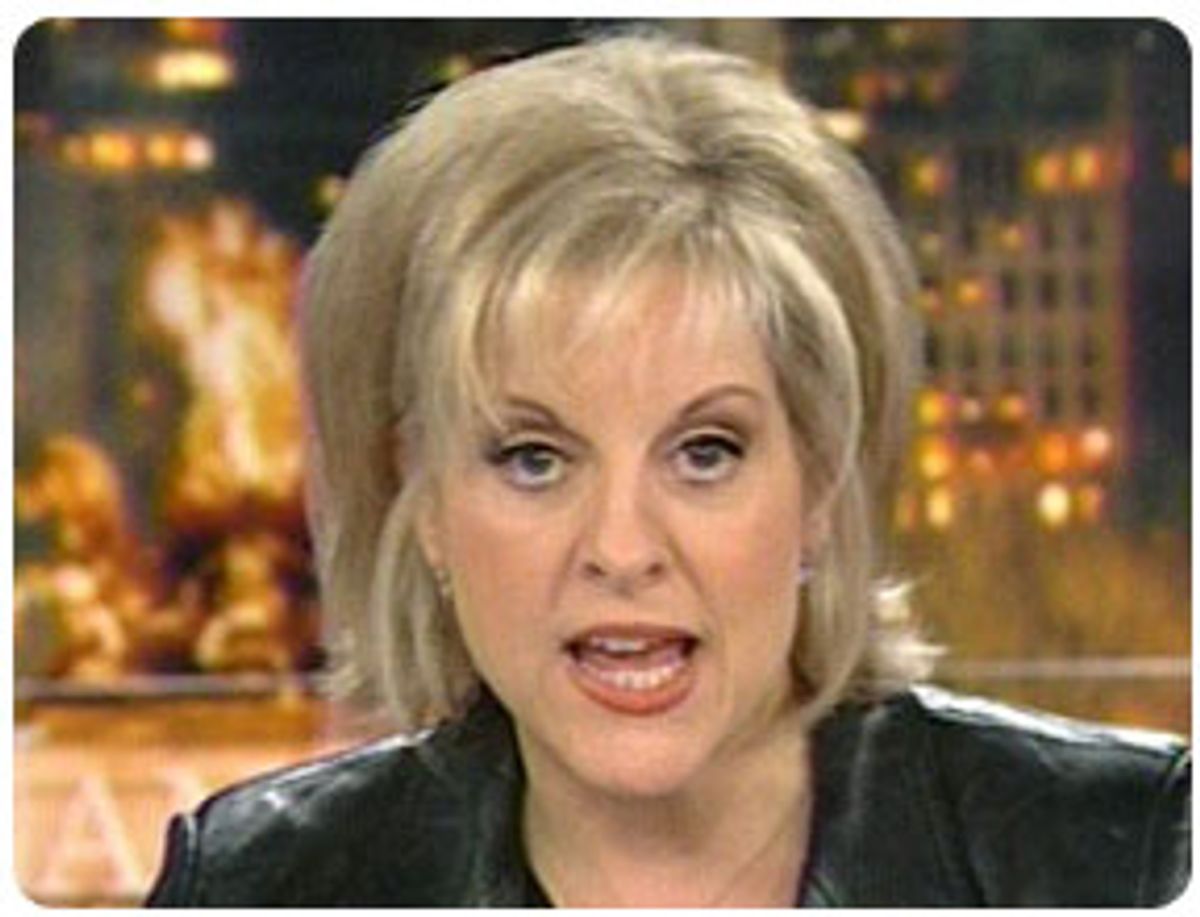 The platinum hair, the snide delivery, those blazers and that nasty stare: Does anyone like Nancy Grace? Through her years as a "Larry King" favorite, a trial pundit for Court TV and now as a talk show host on CNN Headline News, the nostril-flaring talking head has cultivated a television persona based entirely on an aggressive, one-note belligerence that usually bypasses logical argument to go straight for personal attack and often breaks the rules of good taste along the way (see her recent bullying of Elizabeth Smart for a prime example of how Grace tries to go there, no matter how sleazy there happens to be).

But there's so much more wrong with her Headline News show than her own radiating ickiness: For a show supposedly about true crime, it's incredibly bad television. Only those with a high tolerance for stock footage from local news outlets -- her show is 90 percent slow, panning crime-scene shots of buildings decorated with yellow police tape -- could possibly stomach it. A typical episode focuses on one or two cases, and while Grace often brings in a full stable of interviewees, from defense attorneys to former victims, their presence is squeezed by the obsession with looping, static images.

CNN has tried to position her as a straight talker when it comes to legal matters, and her alleged 100 percent conviction rate as a prosecutor is hauled out in all her bios to lend credence to that idea (though several of her convictions were later overturned, and she's been reprimanded three times by higher courts for her trial ethics). The real problem is, though, that as a TV personality, Grace has an unusually sharp disdain for the law. Her arguments tend to boil down to blaming the jury for getting it wrong, as she did in the Michael Jackson case (she brought jury foreman Paul Rodriguez on the show and harassed him) and more recently in the Andrea Yates ruling of not guilty by reason of insanity. She also rejects the notion of presumed innocence and has jumped to conclusions of guilt in cases from Scott Peterson to Michael Jackson and Yates -- most famously when she told Larry King that Elizabeth Smart's neighbor Richard Ricci "was guilty" of the kidnapping, though he was never charged but did suffer a brain hemorrhage while in police custody and died shortly thereafter.

Grace often defends her more outlandish positions by referring to her own status as the victim of a violent crime: In 1979, when she was 19, her fiancé was murdered by a stranger. Grace has said that that the case taught her how the system favors criminals over victims: After a lengthy trial ended in a sentence of life imprisonment instead of the death penalty, she felt justice had been denied her. She changed career paths and went into law. But even this story has its faults -- as a recent story in the New York Observer pointed out, she's allegedly sensationalized or mixed up a lot of the key details: The murderer was a former co-worker of her fiancé's, not a random passerby; the jury moved to convict in just a few hours, not after days of deliberation; the killer avoided the death penalty because he was mildly retarded; the case happened in 1980, not 1979.

Of course, some people must like Grace. Her eponymous CNN Headline News show has been steadily gaining viewers since it debuted in February 2005 and now attracts more than 600,000 people a night. But even her fans must harbor some low-level loathing for her. Her show caters to the same instinct that makes people take in the occasional dogfight: a lust for blood, a desire for brutality. Here's a recent follow-up question she asked a doctor about the Yates case: "Dr. Phillips, you described the drowning process earlier. And regardless of the fact that the last face you see before you die is your mother holding you under, what type of pain, or is there any pain to drowning?" Can't you see she cares?