The Republican TV host reveals why he launched his "Is Bush an 'idiot'?" segment and why conservatives are afraid to question the president. 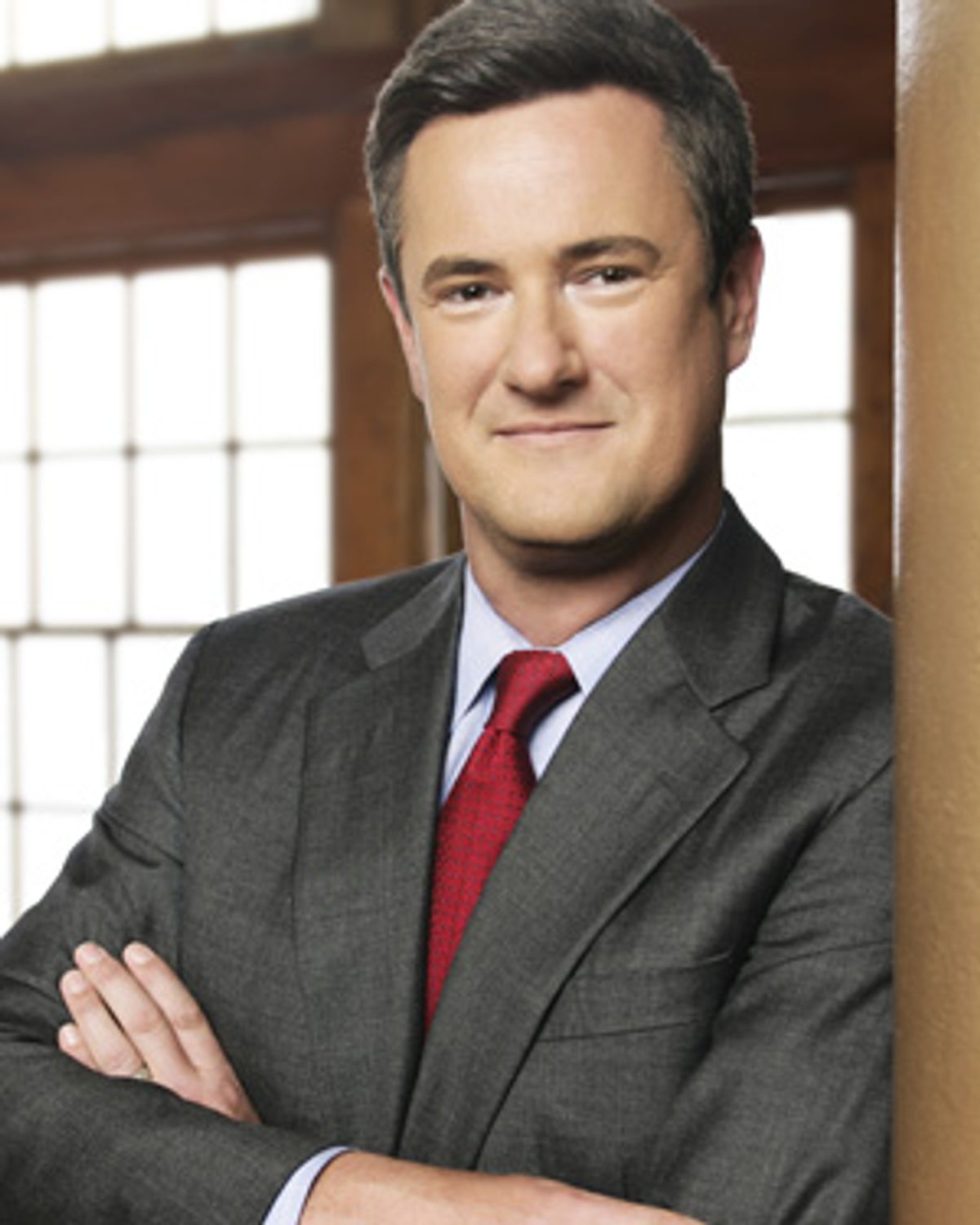 A member of the so-called Class of 1994, the 54 Republican freshmen swept into the U.S. House by Newt Gingrich's Contract with America, Joe Scarborough resigned his seat in 2001. Now the host of MSNBC's "Scarborough Country," he has recently been the focus of much attention from both Democrats and Republicans for his criticism of the president. On Aug. 15, he aired a segment that asked "Is Bush an 'idiot'?" Salon asked Scarborough what brought him to criticize a man he once bragged he'd helped get elected, and how he's dealing with the reaction.

What prompted you to do the now infamous "Is Bush an 'idiot'?" segment?

Somebody had suggested that we get Linda Ronstadt's quote where she called the president an idiot and do what we've been doing for the past three or four years, where we make fun of a Hollywood star questioning the president's intelligence. It's something we've been doing mindlessly over the past several years, but as I was reading it, I couldn't help but think, "Well, wait a second -- I've been hearing this from conservatives for the past year or so. Why don't we ask a question: whether Linda Ronstadt, Democrats and Hollywood left-wing types are on to something." So we put the question up, and I suppose if our lower third had read "Is Linda Ronstadt right?" instead of "Is Bush an 'idiot'?" in quotes, it would have garnered a lot less attention. But we put it up that way, and it has sparked a firestorm. The White House is unhappy. A lot of conservatives are unhappy. Well, not conservatives. A lot of Republican loyalists are unhappy. But again, the only thing I did was ask publicly what a lot of conservatives have been saying privately since Katrina and the Harriet Miers nomination.

That brings up another question I wanted to ask you -- you've been tough on liberals in the past, and you continue to be tough on them now. With your recent shift in viewpoint, have your feelings on liberalism, and the liberal critics of the administration, changed at all?

Obviously since the things they were predicting about Iraq have been proven to be accurate, or at least more accurate than what the administration was saying back in 2003, you certainly have to tip your hat to them.

At the same time, I believed then, and I still believe now, that what we did in Iraq was worth trying. We've had three democratic elections, and unfortunately the country's still descending into chaos. I suppose the biggest criticism, really, should be leveled at Donald Rumsfeld for trying to win the war on the cheap, like Tom Friedman and others have been saying. But looking back at it, there was no way we could have been successful in Iraq with the troop levels that we had over there. That, in part, is why conservatives like me are charging that George Bush is intellectually incurious, and that he stifles dissent.

I think, really, one of the most telling parts of [Bob] Woodward's book "Bush at War" is when he asks Bush if he talked to Colin Powell about the invasion of Iraq, and he says, "No, I didn't feel the need to, because I knew how we was going to respond, that he was against the war," which sort of sends a chill up your spine, because those are the people you want the president talking to. You want him asking tough questions of aides who actually disagree with him. If you talk to people at the DoD or at the State Department or Capitol Hill, they'll all tell you basically the same thing, that the president is a man who's not only politically incurious, but is also a leader who does not like dissent, and I think that's very dangerous.

And if Don Rumsfeld came through talking about winning the war on the cheap, that's one reason why he needed to talk to Colin Powell, because he's always -- I mean, he said it in the first Gulf War, and he said it in this gulf war -- said that you don't win wars on the cheap: You don't want a fair fight. You use military force very reluctantly, but when you use it, you use overpowering, overwhelming force, destroy your enemy as quickly as possible, and then bring the troops back home. That wasn't done, and I think if the president had asked tougher questions in February of 2003, we wouldn't find ourselves where we are in 2006.

That's a very long yes answer to your question.

Here's the kicker -- since 2004, I have been attacked by Republicans, by conservatives, well, actually, more by Republican loyalists than conservatives, by basically the Republican establishment in Washington, for saying the exact same thing that we were all saying in 1995, '96, '97, '98, '99. We were always attacking Bill Clinton's spending levels. Dick Armey called him a Marxist, called Hillary Clinton a Marxist. As I point out in speeches these days, government spending grew by 3.4 percent annually under Bill Clinton the Marxist. Spending has grown by 10.5 percent under George Bush the fiscal conservative. I always say: Give me that choice, I'll take the Marxist at 3.4 percent any day of the week. And so I started in 2004, and when you talk about NSA wiretapping, when you talk about the bank records, my criticisms -- I'm saying the exact same thing now that Bob Barr and David Vitter and myself were saying on the Judiciary Committee in 1999 and in 2000, when Janet Reno was trying to get roving wiretaps without coming to Congress first.

Somebody sent me an e-mail yesterday saying they couldn't believe how much I've changed. That's laughable. I'm saying the exact same thing now that I was saying in 1999, when I was on the Judiciary Committee, that I was saying in 1995 during the Contract with America, that I was saying in 1994 when I was campaigning to be a part of a fiscally conservative Congress. The libertarian strain of Republicanism that was on the rise in the 1990s has been snuffed out by the Bush administration and by Republicans who suddenly adore big government, whether big government in the Justice Department or big government in the Oval Office when they put budgets together. I'm not the one whose convictions have changed. It's the Bush administration and Republican leaders on the Hill whose positions have changed radically since 2001.

You mentioned on your show Monday night that you've been "blasted by Republican loyalists," and of course you're not the first. You mentioned Bob Barr; he, Pat Buchanan, Andrew Sullivan, have been demonized as liberals or "ex-conservatives" for criticizing the president. Now that you're getting a little bit of that, what's your feeling on it?

It is unfortunate for the Republican Party that loyalty to conservative causes has been linked with George W. Bush. I have a friend, an evangelical pastor, who says it's much worse in churches, where a year or two ago, if he ever questioned what George Bush did, his faith in God was questioned!

It goes back to hypocrisy. We Republicans, during impeachment, were so outraged that Democrats would bitch and moan behind the scenes and talk about what a disgrace Bill Clinton was, but then when they went on the House floor and the Senate floor, would fiercely defend him ... We would all scratch our heads and say, 'How could they do that? How could they go out and circle the wagons and say something they didn't believe?'

And yet here we have a Republican administration and a Republican Congress doing basically the exact same thing, where staying in power is more important than staying true to the values that put you in power in the first place. Again, there are more and more conservatives behind the scenes that are voicing concerns, but most of them are afraid to say anything publicly, because they know if they do they'll be branded as traitors to the cause.

Tim Graham, from the Media Research Center, recently referred to your criticism of the president as "Scarborough syndrome" and said that "being a conservative host inside a liberal network -- not to mention a liberal network that has a history of changing prime-time hosts like socks -- might compel you to being [sic] more critical of Bush and conservatives." What's your reaction to that?

I have his boss [Brent Bozell, also of the Media Research Center] on all the time, and his boss doesn't seem to mind it. I think I'm usually on the same side as his boss. It's interesting. Tim had problems with me from the very beginning, when I was with the president 100 percent, because I wasn't on Fox. Sometimes I think he's on Fox's payroll, because, again, just right out of the box back in 2003, when I was the biggest supporter of this war, I was still getting snarky comments from Tim Graham and the Media Research Center. Again, interestingly enough, I get those snarky comments and then they ask me to be the emcee of their yearly event, which I do, and I'm still getting those snarky comments from Tim, despite the fact, again, that Brent Bozell comes on, and again, usually when he's on the show we're in total agreement. Who knows? Maybe he's more of a Bush loyalist than he is a conservative.

I would love for Tim Graham to find one position that I didn't take -- that he didn't take -- in 1999, when Bill Clinton was president, or in 1995, during the Contract with America, or 1994, when we were all campaigning for smaller government. Is he upset that I'm against NSA wiretapping without congressional consent? Is he shocked that I criticized the president for rolling up the biggest deficits and debts in history and not vetoing a single spending bill? What, exactly -- what, exactly -- have I said on my show over the past month or two that I wasn't saying in Congress for eight years or on the campaign trail? The answer is absolutely nothing. I'm saying the same exact thing. So I would redefine "Scarborough syndrome" as remaining consistent to the conservative cause instead of blindly following a Republican president who is more Rockefeller Republican than Reagan Republican.

You were approached to run against Katherine Harris. Why did you decide not to?

A couple of different reasons. The first reason is that my boys are 15 and 18; the 18-year-old is going off to college, and of course he wanted me to run, because he was out of the house, and the 15-year-old didn't want me to run, so that made things much easier for me. But also, politically, look at the landscape -- it would have been very hard for me to run as a Republican with all the problems I was having with the Republican Party and this administration. It would be very hard for a Republican candidate in the state of Florida to be running with a president whose help you'd obviously have to rely on to get elected.

With the way Harris' campaign has gone, what are your feelings on that decision now?

I talked to John McCain at one point, who told me to stay where I was, that I had so much more influence on events and on the debate than I ever would if I was the junior senator from Florida, and I think he was right -- at least that's been my experience since I've been involved in the news business.