The Hezbollah leader has emerged from the ruins of Lebanon as a folk hero -- but is his facade of unity beginning to crack? 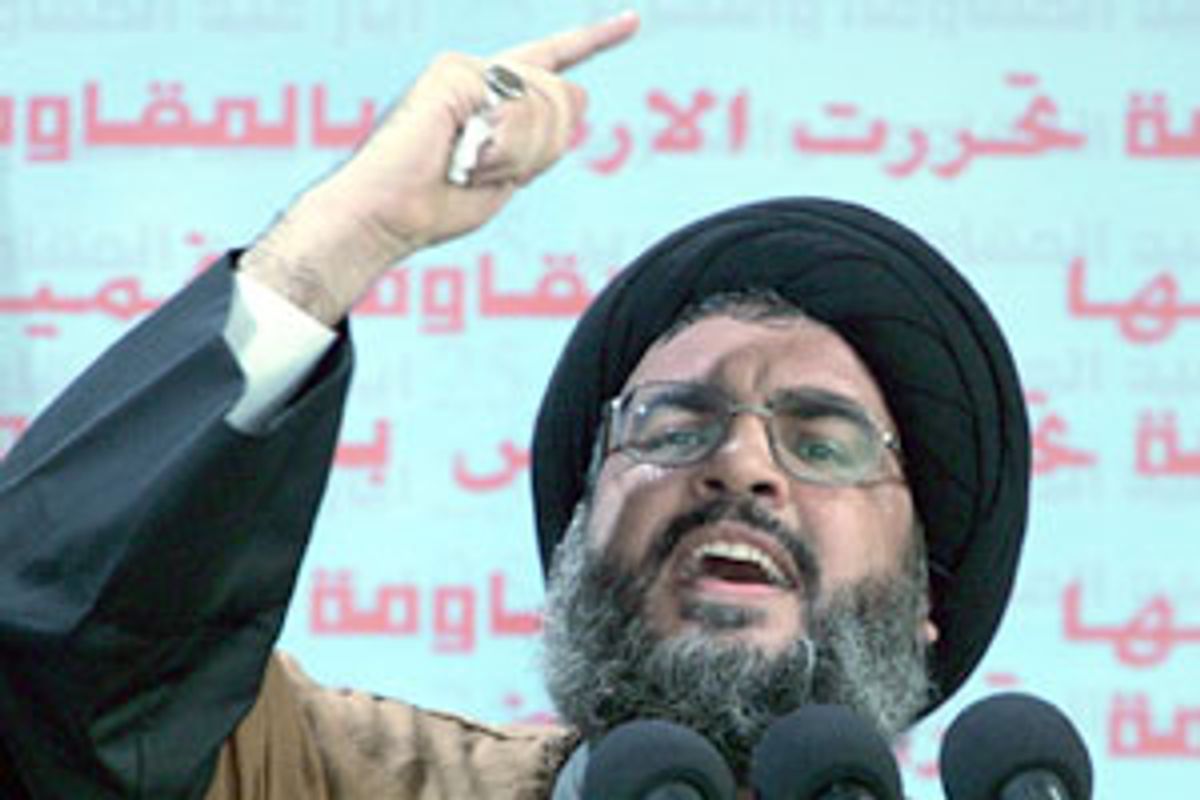 It's hardly been one week since the fragile cease-fire brought a stop to the Israeli bombs falling on Beirut, but already billboards have sprung up along the road from the city's devastated southern suburbs celebrating the great leader -- Hassan Nasrallah. One billboard shows a gunman in the hills of southern Lebanon with the phrase "Ja'a nasr Allah" or "God's victory has come." Remove the space between the last two words and it reads: "Nasrallah has come."

Although much of Lebanon lies in ruins, Nasrallah -- chosen by Iran to lead Hezbollah at only 32 when Israel assassinated his predecessor in 1992 -- has emerged a winner. Not all sectors of Lebanese society are in the thrall to the Shiite leader, but his base of support has expanded to include some Sunnis, secularists, Christians and others who may have previously been indifferent to, or even shunned, him.

With acrid smoke still rising from the rubble, Nasrallah boldly declared that Hezbollah had achieved its goals and won a "strategic, historic victory" over Israel. Along with most of Haret Hreik, the southern suburb of Beirut and Hezbollah stronghold where Nasrallah lived before the war, Nasrallah's modest former home is now dust, pulverized by Israeli bunker busters in July. But instead of destroying his reputation with it, the already influential leader now looms as a pan-Arab folk hero the likes of which the region hasn't seen since Gamal Abdel Nasser took back the Suez Canal from British control in 1956.

"We've always heard all these nostalgic stories about those old revolutionary days from our parents -- my mum used to go all the way to Egypt to demonstrate for Nasser," says television producer Katia Saleh, sipping mint tea at the Al-Rawda seaside cafe, a Beirut institution. "Now I feel like we're living it."

Deep in a devastated, mostly Shiite neighborhood, Abu Mohammad al-Baqir props ajar the warped iron shutters of the Hadi Islamic gift shop, named after Hassan Nasrallah's late son. The shopkeeper is doing a brisk trade: Customers stoop beneath a bar into the dusty gloom to find Hassan Nasrallah posters, key rings, stickers and CDs. Power is off in this wasteland, so Abu Mohammed plays martial music for his customers from his car parked outside.

"We've got a sound engineer working on a collection of his televised speeches from the war," he says. "We take his most important quotes and do them by computer." We're interrupted by someone asking for the latest recordings of the Hezbollah TV station Al-Manar. Another customer, a young woman, wants to buy a new frame for her smiling portrait of Nasrallah, his black turban denoting that he is a sayyed, descended from the prophet Mohammed.

Fervor for the leader who, supporters say, twice stood up to Israel -- in this war and when Israel withdrew from southern Lebanon in 2000 -- stretches well beyond Lebanon, from Tunisia to the West Bank, Egypt to Iraq.

In Cairo, protesters held up the Shiite cleric's picture in Al-Azhar, Sunni Islam's most prestigious seat of learning. Egyptian football fans broke on to the field before a game holding Nasrallah's picture. He's also become a darling of the Arab left, held aloft next to photos of Nasser and Che Guevarra.

In Syria, where Nasrallah was already popular, he's featured on posters and banners alongside President Bashar al-Assad. Priests hold special Masses for him and he is likened to the Kurdish leader Saladin, who conquered Jerusalem from the larger Crusader army in the 12th century. A Syrian car park attendant in Beirut who gave his name as Najib had just returned from his town near the Turkish border with tales of Nasrallah hysteria. "Everyone in Syria is with Hezbollah," he said. "Every house in my town has a Hezbollah flag, and there are pictures of Nasrallah everywhere."

The Lebanese daily As-Safir even reported Nasrallah mania in Africa in a remote Mauritanian village of humble dwellings scattered in the sand with the odd goat and camel roaming around, where heroic tales of Nasrallah and his resistance have joined the traditional poetry and Koran verses recited around the fire at night.

"He is becoming a revolutionary myth," says Walid Charara, cultural editor of Al-Akhbar newspaper and the author of a book on Hezbollah. "But his popularity isn't just about charisma or his ability to speak. It's because he does what he says he will do, which is to defend his country."

Born in 1960 to a grocer and his wife, Nasrallah grew up in a religiously mixed, poor eastern suburb of Beirut and studied at Iraq and Iran's top Shiite seminaries. After ascending to the leadership of Hezbollah in 1992, he led the guerrilla campaign that drove Israel's troops from south Lebanon in 2000 after a 22-year occupation. In 2004, he negotiated the swap of 400 Lebanese prisoners for one Israeli businessman. Nasrallah and his inner circle also led the party to engage in the post-civil-war political system, offering extensive social services to his followers and winning seats in parliament and eventually joining the government in June 2005.

The death of Nasrallah's son in 1997 was another major signpost in the Nasrallah legend. The night after the 18-year-old Hadi was killed fighting Israeli soldiers in southern Lebanon, the whole country tuned in to watch Nasrallah's speech, recalls Ali Makki, a 32-year-old computer engineer. "He talked for ages and we waited and waited for him to say Hadi's name." Only after paying tribute to the others who had been killed -- six Lebanese soldiers and three Christians -- did Nasrallah confirm his son's death, praising God for choosing a martyr from his family. Timor Goksel, formerly the spokesman for the UNIFIL border force, remembers watching the speech with a pro-Israeli Christian family in the south. "The family I was with all started crying," he said. "Everyone was thinking about the other leaders in Lebanon, with their sons in Europe or America, and there was Nasrallah losing his son in battle and almost trying to write it off ... The way he handled that was a masterpiece." Nasrallah refused to cut a deal with the Israelis for his son's body. "He drove them mad. He was so keen not to be seen giving his son special treatment," Goksel said. The eldest of Nasrallah's two surviving sons, Jawad, is believed to have fought in southern Lebanon in the latest conflict.

The assassination of former Prime Minister Rafik Hariri in February 2005 was another turning point for Nasrallah. Lebanese society was polarized, and he benefited from the split. "The Nasrallah cult was born partly as an antidote to the Hariri cult," says Amal Saad-Ghorayeb, the author of a book on Hezbollah. With pressure on the Syrians, whom many blamed for Hariri's death, came pressure to disarm Hezbollah. Both were the targets of U.N. resolution 1559, which called for Syria's withdrawal from Lebanon and the disarmament of all militias. "Shiites felt there was a conspiracy against them," says Saad-Ghorayeb, and the sect closed ranks around Nasrallah.

His speech to some 1 million supporters in Beirut on March 8, 2005, marked the emergence of a personality cult around the leader, according to Saad-Ghorayeb. He promised Hezbollah would hold on to its weapons, which they saw as compensation for both a lack of Shiite political power and the absence of a strong Lebanese army to prevent Israel from invading again. Afterwards at Beirut's Lebanese American University, where Saad-Ghorayeb teaches, "you'd see these Westernized rich students with Nasrallah ring-tones," he says. "You'd see young girls in low-cut jeans with Nasrallah pictures on their books."

Since the cease-fire came into effect last week, Nasrallah has moved quickly to promise to help rebuild destroyed homes and to pay rents in the meantime (believed to come from Iran). Above all, it has been his ability to deliver on such promises -- even among Israeli observers he's reputed to be a man of his word -- that has set him apart from the many corrupt, bombastic Arab leaders whose words bear little resemblance to their actions. Given the extent of the destruction, he bears a heavy burden.

During his recent "victory" speech, people in a bar in the western district of Hamra watched, rapt, as the charismatic leader spoke on TV. Nasrallah makes viewers feel as though he's talking directly to them, an impression enhanced when he switches from eloquent classical Arabic to colloquial Lebanese in his usually improvised speeches, says Samah Idriss, the editor of al-Adab cultural magazine. "We say in Arabic he's areeb lil alb -- close to your heart," he says.

In a gesture sure to become part of Nasrallah lore, early on in the war he "promised" in a speech on Al-Manar TV that an Israeli warship would go down in flames; at the precise moment he spoke a rocket hit its target and a faint glow was visible out at sea where the vessel burned. Cries of "Allahu akbar!" ("God is great!") echoed through Sunni and Shiite neighborhoods alike.

But now that the bombs have stopped falling, the veneer of unity forged under the assault has started to crack, and some Lebanese have started to ask why Hezbollah seized two soldiers on July 12, when Israel's retaliation destroyed the infrastructure and killed more than 1,100 Lebanese. "I'm sorry," one patron scoffs loudly at the TV, "I don't believe in this victory." "He has a lot of P.R. work ahead of him," former UNIFIL official Goksel says, "to explain why all this was necessary."

But among Shiites, especially, and others in search of a pan-Arab movement forged in opposition to the United States and Israel, Nasrallah's stature continues to soar. "You see these displaced people returning to their homes in the south and there's no home, there's no village even," says Goksel, "and they're still praising Nasrallah."

Gheina Daghma, a young, formerly secular Shiite woman in the Hamra bar, didn't support Nasrallah before the war, but now she sees him in another light. "Nasrallah's not an ordinary person," she says. "He's something from God to us."

Lucy Fielder is a freelance writer based in Beirut.