Gangsters, showgirls, wowser production numbers -- OutKast's messy, ambitious and extraordinary movie musical has it all ... and soul to spare. 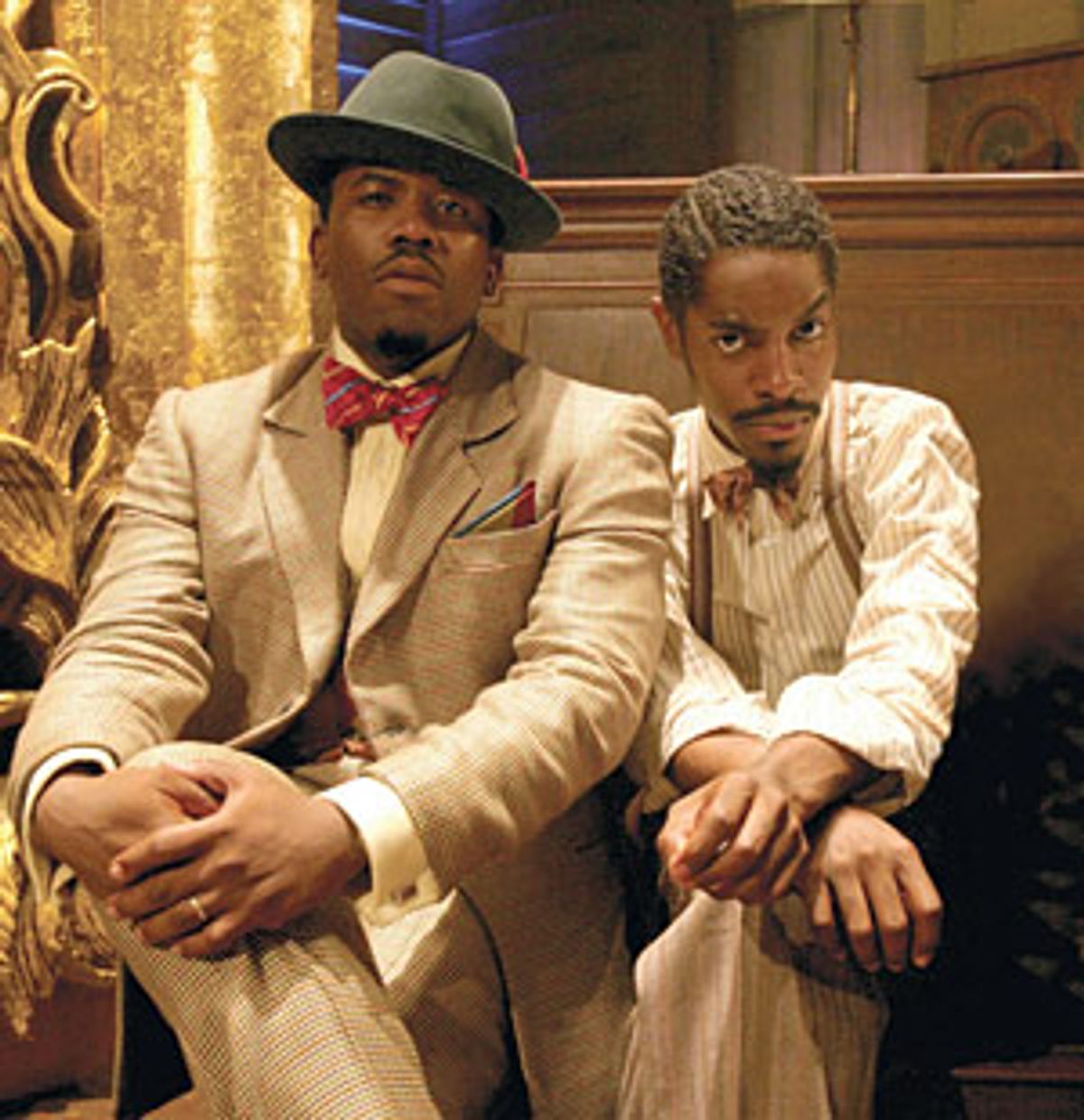 In the '50s and '60s, Charles "Teenie" Harris captured the vitality and elegance of Pittsburgh's African-American communities in the photographs he took for the Pittsburgh Courier. These pictures -- of women swathed in fox fur and proper white gloves, of neatly dressed schoolchildren lining up to be inoculated against polio, of a shoemaker standing proudly behind his bench, wearing a dress shirt, vest and tie beneath his apron -- can be found in a wonderful compilation called "One Shot Harris: The Photographs of Charles 'Teenie' Harris." The pictures, of course, say more than words can adequately express, but in his introduction to the book, Stanley Crouch's words capture their essence as well as any could: "What each of those Pittsburgh people realizes is what all of us as Americans need to know, which is that our entire story is always about many stories and that we are connected by the history of our nation and by the things that we have either invented or borrowed or refined in order to live lives as close to what we wish as we can."

Crouch is no friend to hip-hop, but what he wrote about Harris also cuts to the heart of Bryan Barber's ambitious, messy and extraordinary "Idlewild," starring André Benjamin and Antwan A. Patton (also known, respectively, as Andre 3000 and Big Boi), the two members of OutKast. "Idlewild" is a musical, although the album of the same name that's being concurrently released isn't the movie's soundtrack at all: Many of the songs in "Idlewild" come from OutKast's 2003 "Speakerboxxx/The Love Below"; they've been reinvented and reimagined for the movie -- the ballads, in particular, have a silkier, jazzier feel.

That's significant, because a yearning for the past thrums beneath the lush, satiny surface of "Idlewild," which is set, roughly, in Prohibition-era Georgia, although we may as well simply call it a mythical "Then." Benjamin plays Percival, a mortician and aspiring musician. He works with his father (a stately Ben Vereen) at the family funeral home by day and plays jazz piano at night in a club called the Church -- which really is a kind of church, depending on what kind of benediction you're looking for. His lifelong best friend is Rooster, played by Patton, a family man with five kids and a long-suffering wife, Zora (Malinda Williams): At night, Rooster helps his uncle, Spats (Ving Rhames), run the Church, and he sings and dances onstage there too, succumbing to all the temptations that his charm and talent bring his way.

Percival cherishes his Cab Calloway records; Rooster is never seen in anything more casual than an impeccably tailored suit. But Barber (who also wrote the script) and his two stars use the retro feel of "Idlewild" as a mirror held up to today, suggesting how the past informs the present. Before there was bling, there was glamour, and then, as now, making the most of your God-given talents was a way to gain respect within your community and within your heart. "Idlewild" is a wild, sprawling movie, one that's bound to be underestimated and misunderstood. But maybe the best way to read it is to treat it as a dream history, as a testament, to borrow Crouch's words, to the ways that inventing, borrowing and refining can bring us closer to the lives we want to lead -- yet even within that framework, there's no guarantee of happiness.

"Idlewild" is an unconventional movie filled with conventions: A young singer named Angel (Paula Patton, whose fragile beauty also throws off flinty sparks) leaves home to make a name for herself, hoping to touch down only briefly in the small (fictional) town of Idlewild, Georgia, on her way to fame and fortune in Harlem by way of Chicago. After slinking her way into a contract at the Church, she meets, and almost immediately falls for, Percival -- she calls him, with Lauren Bacall-style swagger, Piano Player. "Idlewild" also gives us ruthless gangsters, like the liquor black-marketeer Trumpy, played by Terrence Howard, his cottony whisper a seductive and terrifying counterpart to his aura of pinstriped cool. There are backstage floozies, like the platinum-tressed Rose (Paula Jai Parker), who keeps a framed photo of Jean Harlow in a place of honor on her mantle. And Patti LaBelle and Macy Gray both appear in small roles as spoiled, ambitious divas -- because no movie about show biz would be complete without at least one.

But conventions are only building blocks -- it's what you do with them that counts. Barber has made a movie that's so big, and so visually and aurally enveloping, that there's no way you can look at it and say you've seen it all before. The picture shares a lineage with Herbert Ross' vivid and exquisite 1981 movie version of Dennis Potter's "Pennies From Heaven," and also with Prince's hugely underestimated 1986 ode to old Hollywood glamour, "Under the Cherry Moon" -- although "Idlewild" isn't as expertly controlled as the former, and the ideas behind it run deeper than in the latter. Barber has put together a mix of music and visuals that's often invigorating but sometimes overwhelming: There's so much going on, particularly in the nightclub scenes (where we're dazzled both by glittery showgirls in fringed panties, and civilian dancers on the floor giving the pros a run for their money), and Barber doesn't always bother to direct us where to look. "Idlewild" sometimes has a scattered, frenetic feel; it can be unnerving until you simply give yourself over to it.

But this picture's ambitions aren't just a stunt: Barber has so many ideas, so many miniature details that he wants to pack in, that he needs a very big movie to contain them all. An embossed rooster on a metal flask comes to life to tease and taunt Rooster, a kind of Greek chorus to his troubled conscience. Instead of the standard musical notations, Percival's sheet music is populated by a small community of stick figures: They run, jump and get into trouble on the staff, a clear metaphor for the way the shy, reserved Percival just can't get the lively, inventive music that's in his head out through his fingers. Barber also gives Benjamin a terrific, exquisitely worked-out musical number set in Percival's bedroom, the room he's clearly slept in from childhood. The wall above his bed is dotted with dozens of cuckoo clocks, in all colors, shapes and sizes, and their morning cacophony awakens him. He starts the day with a yawn and a song -- he can even yawn and sing at the same time -- and the clocks' inhabitants, the little wooden birds and people who live inside, form his backup chorus, popping out of their respective doors to add their two cents.

There's a lot of charming craziness in "Idlewild," but there's drama and heartbreak too. Barber stages the movie's violent scenes artfully -- you may not always be able to tell exactly what's happening, but you always feel the weight of the characters' actions. (The picture was shot, with sure-footed grace, by Pascal Rabaud; I can't imagine I'll see a more beautifully lit picture this year.) Patton and Benjamin rise to everything the movie asks of them. They have only a few scenes together, and yet they're two complementary halves of one whole. Benjamin -- who wears his ebony-slick tuxedos and supple, workaday tweeds as well as any old Hollywood star ever has -- is a lovely, intuitive actor, able to convey the way Percival's thoughtfulness and gentle spirit aren't obstacles to the artistic ambition that drives him, but its slow-burning fuel.

Patton's Rooster is a very different presence -- he's flashier, and more likely to listen to the devil on his shoulder rather than the angel. But Patton is part of one of the movie's finest moments, in a scene with the great Cicely Tyson: Rooster's wife, fed up with his running around, has finally left him. He's driving down a dirt road, pretending not to care that his personal life is falling apart, when he comes upon a broken-down car. Inside is a woman who identifies herself as Mother Hopkins (Tyson); her many grandchildren, who have been entrusted to her care, are clustered around her. She has run out of money. Rooster, of course, always carries a fat wad of dough around with him.

You know what happens next. And you'll probably even be able to guess what happens after that. But it doesn't matter. There's an assertiveness to "Idlewild" -- a mix of braggadocio and thoughtfulness -- that you don't see in many contemporary movies. The picture demands not just that we look, but that we see. An act of goodness can turn a life around. It can change your carriage, make you worthy of the beautiful suit you're wearing. It can be a way of honoring those who came before you and of cutting a path for those who will follow. All talking, all singing, all dancing: Between the gangsters and the showgirls, the gorgeous costumes and the wowser production numbers, "Idlewild" has just about everything a popular entertainment can offer. It also has a soul, and that comes free with the price of a ticket.