Mark Wahlberg stars in this inspirational real-life story of a regular guy plucked from obscurity to become an NFL pro. 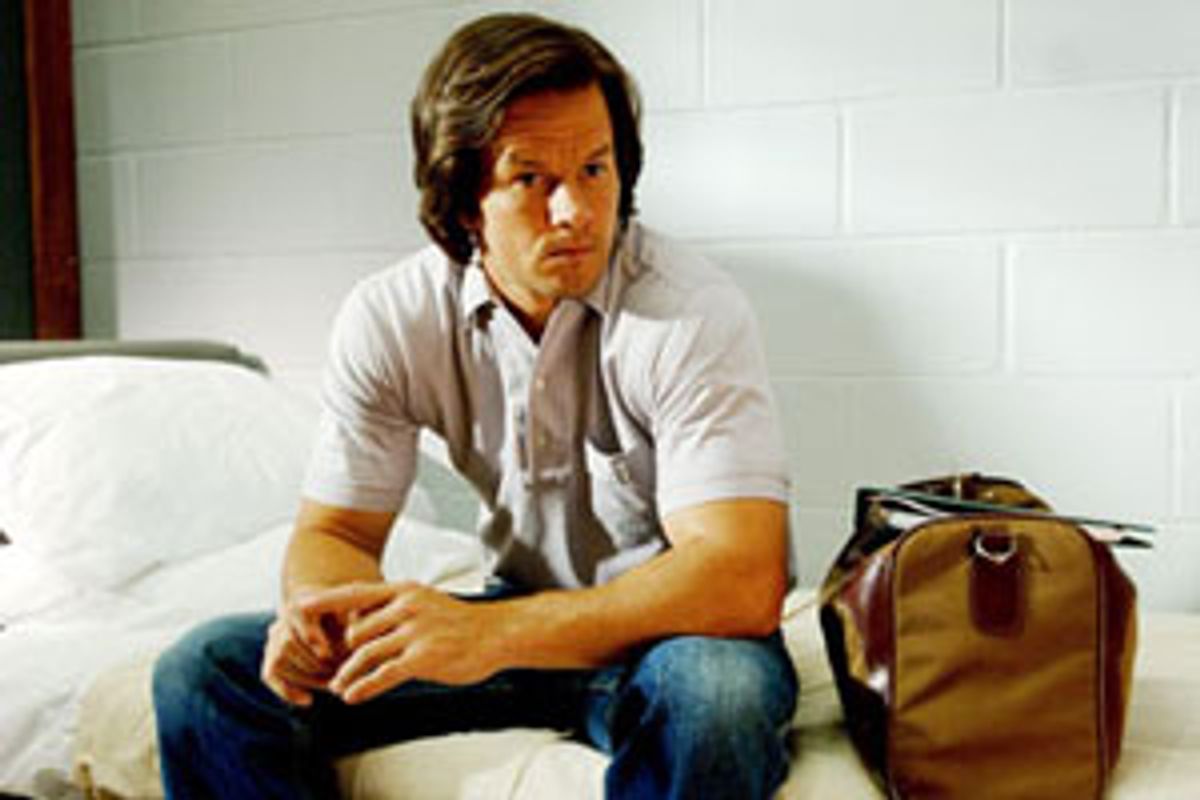 In 1976, Vince Papale, a 30-year-old bartender and part-time teacher, attended an open tryout for his hometown NFL football team, the Philadelphia Eagles. He not only made the team, a near-miraculous feat considering he'd never even played college ball, but also helped the Eagles break an 11-season losing streak. (Papale went on to play for the Eagles for three seasons.)

"Invincible" is the unapologetically inspirational picture based on Papale's story, and you can tote up the life lessons encased within it -- It's never too late to reach for the stars! Failure is a four-letter word! and so forth -- without even seeing the picture. But there's a danger in reducing pictures like this to the sum of their lessons, at the expense of recognizing them as satisfying, if flawed, genre exercises.

"Invincible" is the latest in a franchise of inspirational sports movies, based on true stories, produced by Walt Disney: In "The Rookie," an older, failed athlete (played superbly by Dennis Quaid) resurrects his baseball career. The less satisfying "Miracle" traces the path of the 1980 U.S. Olympic hockey team from scrappy underdog status to gold-medal glory. The problem with "Miracle" is that it often does feel like just the sum of its lessons -- a motivational seminar with a thin coating of movie wrapped around it. Even so, its essence is magnetic: I think it's perfectly possible to dislike "The Rookie" or "Miracle" as movies and still discover that, despite your better judgment, you have some stake in watching these characters build or regain their self-respect.

"Invincible" bottles that same formula, in the same prodigious quantities, as if recognizing that formula served straight up, unapologetically, is sometimes the very thing that draws us to movies in the first place. The picture was shot and directed by Ericson Core; it's his debut as a director but not as a cinematographer (his D.P. credits include "Daredevil" and "The Fast and the Furious"). There are all kinds of problems with "Invincible": It suffers from an overload of "thrill of victory, agony of defeat" slow-motion action sequences, and Core and screenwriter Brad Gann lean in hard on overly sentimental male-bonding themes. Occasionally, Core's visual choices are just plain weird: At one point, he gives a football field the gauzy dewiness of a Love's Baby Soft commercial. But the movie is straightforward in a way that makes it feel less manipulative than it might.

Mark Wahlberg plays Vince Papale less as a guy with a dream than as a guy who isn't sure he deserves a dream. As the movie opens, Vince is more or less out of work, and when he returns home to his somewhat depressing South Philly apartment, after a night of playing football in an empty lot with his buddies, his wife cuts him down with her bitter glare: For a guy out of work, he's having too much fun, and she doesn't like it. She leaves him shortly thereafter (her kiss-off note is a masterpiece of cruelty), and Vince ends up spending much of his free time with his pals down at the local bar, where he works part time. (The owner, Max, is played by the effortlessly likable Michael Rispoli.)

All the guys are Eagles loyalists, and they're both amused and intrigued when the team's new coach, Dick Vermeil (Greg Kinnear, his hair blow-dried into a scarily accurate '70s coif), attempts to resuscitate the foundering team with a public-relations stunt: He announces open tryouts, in which any old schmo can show up to try out for the team. And you should see these schmoes: Hooting and hollering, some with their bellies packed into tight track pants, they putter around the field with alarming inefficiency before ultimately pooping out. But Vince, his torso an inverted pyramid built out of muscle, shows glimmers of being a real athlete. Even so, when he learns he's made the team, he barely allows his excitement to register. Vince doesn't think he'll last long with the Eagles, and his resentful teammates, who call him an old man, don't think so, either.

Vince sticks it out, but tentatively: Wahlberg plays him as a guy who knows it could all fall apart at any minute. And that's the very mood that makes the movie work. "Invincible" is a tribute to the can-do American spirit, but its hero isn't an egomaniacal winner type, advertising how much he always believed in himself even during tough times; nor is he your stock underdog, scrambling up disingenuously from the bottom of the pack. Wahlberg's Vince Papale is a guy who, deep down, suspects he's pretty much a loser: Sympathizing with him is easy, and liking him is even easier. Wahlberg gives a very nicely tuned performance: He's so casual and believable that some people may accuse him of not acting at all, but this kind of relaxed, unstudied performance is among the hardest kind to pull off. The love interest here, Vince's sassy fellow barkeep, Janet, is played by Elizabeth Banks, and she brings a great tomboy-vixen spirit to the role; her scenes with Wahlberg keep the movie crackling along.

Much of the dialogue in "Invincible" doesn't feel so much written as channeled from the unibrain that we draw from as plucky, sports-loving Americans. When one of his colleagues tries to get Vince kicked off the team, Coach Vermeil defends the unlikely rookie with the words, "He's got heart." The colleague responds, "People don't want heart, Dick. They want wins." But sometimes dialogue that's stale on the page draws life from the movie around it, and that's what happens here. And Core takes care to situate the story carefully in its specific time and place. In 1976, we Americans were supposed to be enjoying our bicentennial proudly; but economically, we were ground-down and feeling anxious, and Core finds good ways to get that across visually. The opening-credit sequence features shots of kids jumping on junkyard mattresses, of guys going to their jobs as line workers, of closed-up stores with "fixtures for sale" signs taped in their windows. (The music behind those credits is Jim Croce's wearisome self-actualization anthem "I Got a Name," but at least the movie later redeems itself musically with Rod Stewart's lovely "Mandolin Wind.")

Just before his Eagles spill out onto the field for a big game, Coach Vermeil tells them, in another one of those channeled-rather-than-written lines, "The people of Philadelphia have suffered. You are what gives them hope." The players nod in somber agreement, recognizing the veracity of this cliché of movie writing. But at least "Invincible" explores clichés without guilt. If you were a nearing-middle-aged guy, in America in the mid-'70s, what might be important to you? Having a job that's not going to be pulled out from under you? Being able to meet your pals down at the local watering hole after a stressful day of work or, worse, of being out of work? Meeting a nice girl to settle down with? Getting together with the gang to play ball at night in an empty lot? "Invincible" recognizes that all of those things are clichés -- and runs with them anyhow. Sometimes, a cliché is anything that gets you through the day.