The third season of "Deadwood" ends in bitter threats and desperate maneuvers, as its characters balance their principles against Hearst's ruthless tactics. 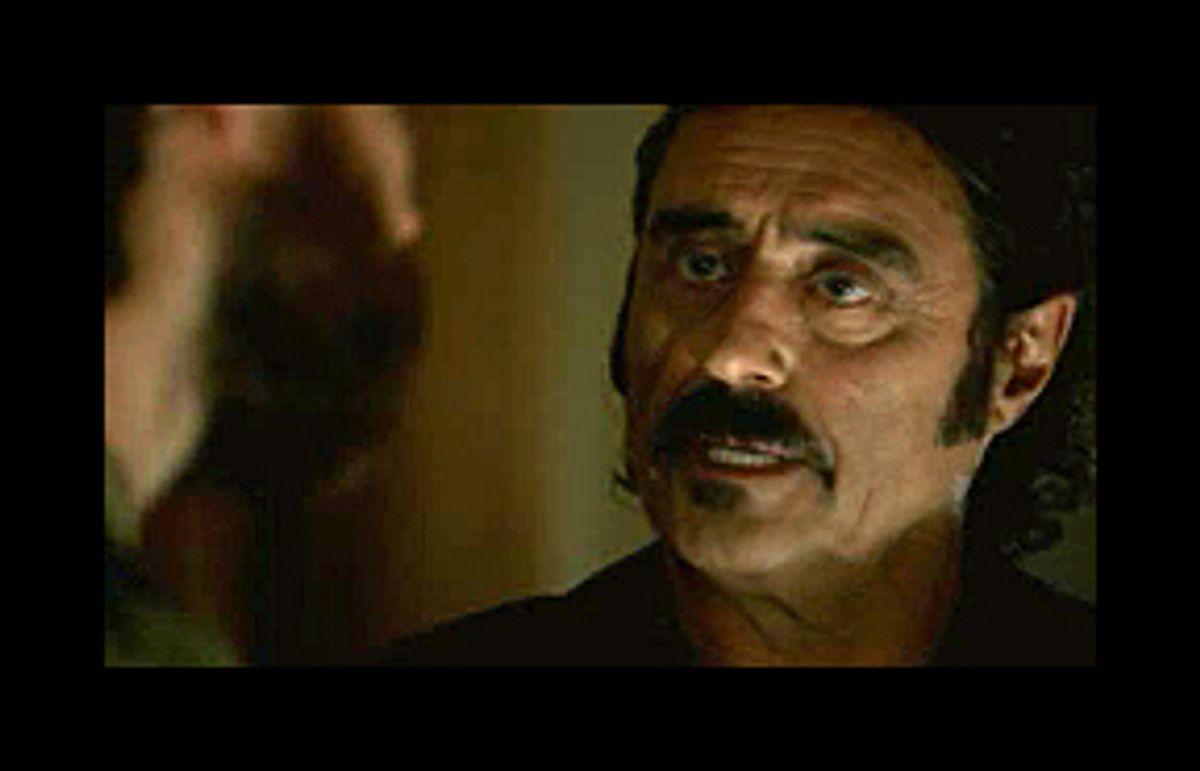 At the start of the third season finale of "Deadwood," thespian Jack Langrishe serves as the Greek chorus, giving voice to the darkening clouds looming over the tiny South Dakota town. "This camp is in mortal danger!" he laments. "The man, Hearst, is a murderous engine. My friend, Swearengen, aware their combat is unequal, feels the appeal of the gory finish. Others I've just come to know stand candidates in the elections whose results they know may be moot. What, one is disposed to ask, in fuck ought a theater man to do?"

Langrishe may be feeling helpless, but unlike many of the other residents of Deadwood, he has an ominous grasp of the big picture in town and can see not only how high the stakes are, but also how many of the key players, though they may claim otherwise, might secretly thrill to the notion of impending bloodshed. Like any actor worth his salt, Langrishe is a keen observer of human behavior; he knows Swearengen, for one, could stomach a full-blown battle, even as he takes steps to avoid one. As a man of the theater, Langrishe may be uniquely equipped to manipulate Hearst, but also uniquely unprepared to face the "gory finish" that calls to the others.

But this is what George Hearst and his hired guns have unearthed, more than anything else: Those in town who will abandon their limited morals to save their own hides (the corrupt casino owner Cy Tolliver or the cowardly "mayor" E.B. Farnum), and those who will readily throw themselves in harm's way for the sake of their beliefs or ideals. Langrishe is an interesting study because he's terrified, but he's still willing to do his part to influence Hearst, either by currying favor with his back treatments or by suggesting that Hearst listen when the spirits call to him -- particularly if they call him away from Deadwood.

But under the current stresses, even Al Swearengen, a brutal, lawless man, starts to embody the essence of reasoned, respectable behavior. Or, as Swearengen's right-hand man Silas puts it, "When he ain't lyin', Al's the most honorable man you'll meet."

Of course, it's an odd sort of code Swearengen follows, as evidenced later in the episode by the human costs of keeping Trixie alive. Every time we see Swearengen grasping at his missing finger, lost in a run-in with Hearst, a grim look flashes across his face, like he's ushering all of his self-restraint to keep from slitting Hearst's throat on the spot. Obviously Swearengen would kill Hearst in a heartbeat if he thought he could escape with his life. Unlike the others, Swearengen isn't the least bit surprised by injustice and evil, but he still isn't about to actually lose his life just to get revenge -- he's nothing like his henchman Dority, say, or even Bullock or Utter in that way. Above all else, Swearengen is a pragmatist, and values his hedonistic existence far too dearly to throw it away for his ideals.

Charlie Utter, on the other hand, is far more reckless and far less attached to his own well-being, and after years backing Wild Bill Hickock's plays, he's no stranger to the deadly standoff. With his temper and stubborn nature, Utter may be the least hesitant of them all to start trouble with Hearst. In the first scene of the finale, we see him threaten Hearst to his face. (Remember that the last time Utter saw Hearst, in the jail, he openly mocked Hearst with the body of the man Hearst's men had slain). Utter seems eager to let the man who murdered Alma's husband and brought chaos to the camp know he's not one to stand for such abuses.

Hearst: Who are you, Mr. Utter, for me to care what you like or don't?

Utter: I'm the guy who, next time you see me, you'd better take a different fucking tone with.

Hearst: Given what's in store, I'm not sure I'll even learn what price I've paid for not complying.

Utter: Oh, I guess someone lookin' hard might could find you in there somewheres, peekin' from under the covers to make a fuckin' threat.

Hearst shuts the door on Utter, but we see fear in his eyes, maybe for the first time. Hearst isn't an impenetrable character, of course -- there are hints that he's lonely in camp, that it's a struggle for him to connect with others, and even when he does, with Aunt Lou or Jack Langrishe, his supposed companions clearly dislike and distrust him. Alienated as he is, he almost never seems fearful, so it's gratifying to see someone get under the guy's skin.

Meanwhile, almost everything gets under Bullock's skin. Offended by every injustice he encounters, big or small, Bullock seems to be in a perpetual state of provocation. One of the sublime choices creator David Milch made when forming the characters of "Deadwood" was to give Al Swearengen, the town's outlaw, a very practical belief in rules and order, an eye-rolling tolerance for slackers and miscreants, and a firm grasp of the value of incentives, manipulations and "flanking maneuvers" of all sorts. "Pussy's half price for the next 15 minutes!" he announces to his patrons at the Gem after a bloody conflict. And following his predawn meeting with Bullock, Bullock's business partner Sol, Utter and Trixie, he gripes, "My meetings, I provide refreshment" -- referring to the canned peaches he began to serve in order to lure everyone into participating in talks about the future of Deadwood. In contrast, Bullock, ostensibly a man of the law, gives pretense to behaving like "the decent and decorous" but loses his temper and behaves recklessly at every turn. In Swearengen's very deliberate, pragmatic eyes, Bullock is "an errant maniac."

The beauty of "Deadwood" this season, though, lies in watching a morally corrupt pragmatist like Swearengen and a temperamental idealist like Bullock collaborate to keep the town from outside forces bent on taking advantage of the town and its resources. We saw hints of this in the second season, as the residents of camp strategized to keep power out of the hands of government officials in Yankton. But Hearst has proven a more slippery and formidable foe, one with the very real ability to make life miserable for all of Deadwood's inhabitants, so the amount of maneuvering and coordinating required of so many disparate individuals, from Alma to Mr. Wu, has been breathtaking.

And, strangest of all, seeing the bonds of friendship grow between such clashing personalities, many of them former enemies, has made the third season of "Deadwood" its most moving yet. The General stays in town to take care of his former enemy Steve; Joanie not only tolerates Calamity Jane's volatile nature, but tells her she wants to be her protector and advocate; Swearengen grouses when Merrick wants his input on a story, but then inquires about Merrick's broken ribs. Best of all, we see Richardson, whom everyone either bosses around or disregards, getting cleaned up and sent off to the polls by Aunt Lou. Having just lost her son, Aunt Lou focuses her nurturing nature on Richardson, shining his boots and instructing him to vote for Mr. Bullock.

Even Cy Tolliver, who's done nothing but sell out the town for his own gain, seems to have a meltdown in the final minutes of the finale, taking his self-hatred out on Leon and Janine, whom he's cruelly taken to calling "Stupid." Pulling out a gun, he seems intent on killing Hearst before he rides out of town. Loathsome as Tolliver has been from the second he set foot in Deadwood, we finally see that he's ready to take a reckless stand against Hearst, and we recognize that his fury over the past weeks may have been a reflection of his inner turmoil over having been used by Hearst and abandoned by Joanie. Our new view of Tolliver is helped along by an earlier scene, where Joanie stops by to thank him for keeping her alive over the years. Suddenly, we view Tolliver through her eyes: pathetic and blindly raging, yes, but also worthy of love and empathy.

This is one of David Milch's most impressive writing strengths: messing not only with our sympathies, but also with our sense of right and wrong. It's fitting, then, that the only way to keep Trixie alive and keep the town from descending into chaos is by killing a completely innocent woman. This is the perverse logic of a lawless town, evolving into its own self-governing organism, but it's also a reflection of the way an individual generally encounters moral dilemmas: Outside of the hard and fast procedures and policies of law, we're left to weigh our own costs and benefits against the moral principles in play. In the end, most of us go with our hearts, and that's what we see Swearengen, Sol and Bullock do when they lie and sacrifice another to save Trixie's life. As an audience, we're bothered by the injustice of it, of course, but we're still relieved and grateful to see Trixie survive, since her impulse to lash out and shoot Hearst in the wake of Ellsworth's murder is a similar reflection of using your heart over your head.

Even as he toys with our moral compasses and our emotions, though, Milch's tricks and manipulations never feel cheap or shallow -- they arise from each character's truest nature, the inherent troubles that go hand in hand with the conflicting personalities in question: a hot-headed sheriff (Bullock), a troubled tyrant (Tolliver), a proper, educated dope fiend (Alma Ellsworth), a delusional, ruthless capitalist (Hearst) or a sweet-natured belligerent drunk (Jane). And there may never be another TV character with the simultaneous hideousness and raw appeal of Al Swearengen, a criminal with an interest in order and cooperation, a nasty, self-serving man with endless compassion and an unfailing sense of humor.

As the third season of "Deadwood" comes to a gory finish, with just four more hours for Milch to tell the rest of the story, all we can do is feel grateful for the time we've been fortunate enough to spend in the company of such rich, fully realized characters. From the odd quirks of its language to the vivid scrappiness of its setting to the undeniable soul at its core, there will never be another place quite like Deadwood.