What could have happened on Comair 5191

In the dark, foggy early morning, with controllers hurrying them along, two busy pilots don't notice they're on the wrong runway. 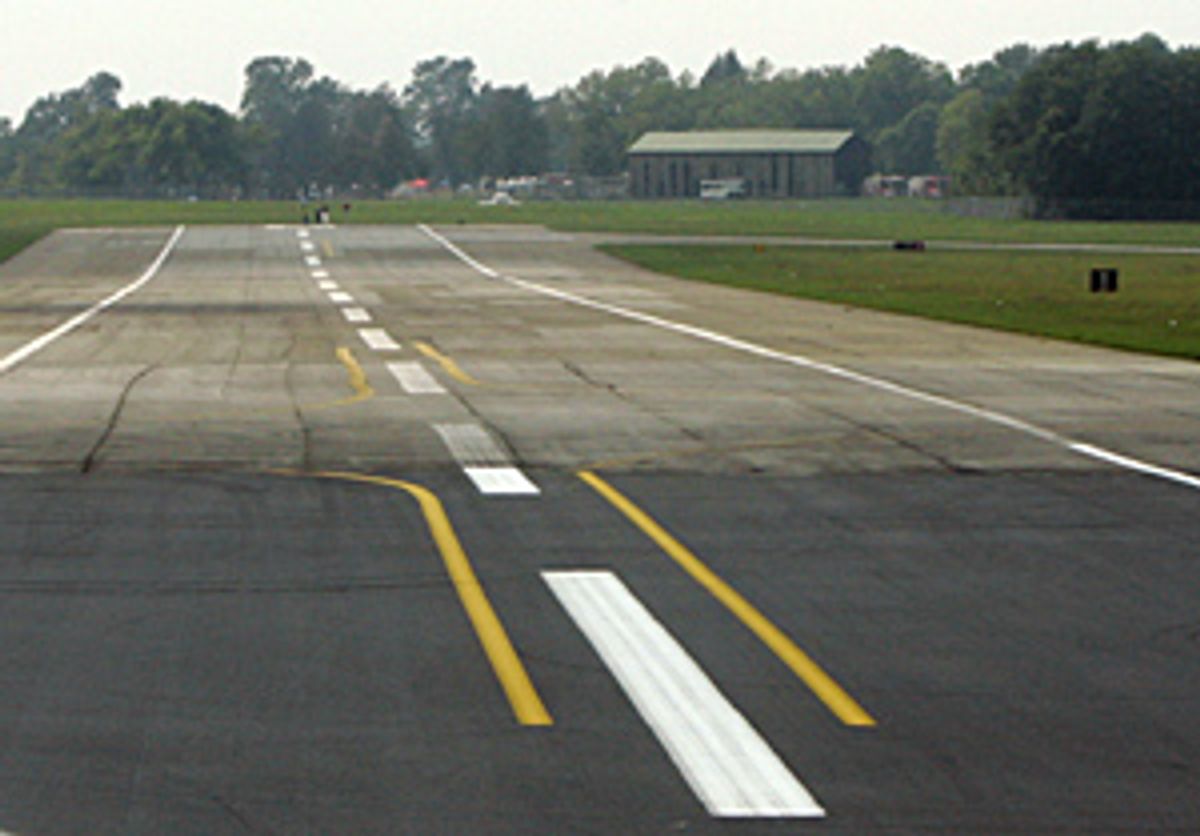 Early Sunday morning, 49 people were killed in the crash of a Comair regional jet in Lexington, Ky. Bound for Atlanta, Flight 5191 apparently attempted takeoff from a too-short runway. The Bomardier CRJ200 smashed through a perimeter fence before skidding into a small farm a quarter-mile from the airport perimeter, where it burst into flames. Of 47 passengers and three crew members, all perished except for the first officer, who remains hospitalized and badly injured. It was the worst crash on North American soil in almost five years, and the worst involving a regional airliner since 68 people died 11 years ago aboard American Eagle Flight 4184.

Comair, headquartered in northern Kentucky, not far from the Cincinnati airport, was founded in 1976 and today is one of the largest regional carriers in the world. It's a subsidiary of Delta Air Lines, operating independently as a "Delta Connection" partner. Along with its parent, Comair has been struggling to emerge from Chapter 11 bankruptcy protection for the past 10 months. Regional jets -- or simply "R.J.s" as they're known in the industry -- have become a staple of domestic air travel, and the Bombardier CRJ is the most widely used type, with more than 1,200 in service. Comair flies more than 170 Bombardier models of two sizes.

(Here's something you might not see in the mainstream media: a photograph of the actual aircraft destroyed at Lexington, registered N431CA. Its cockpit, quite clean and sleek, would look like this.)

It's perhaps sadly ironic that the copilot was the only survivor. Early speculation is almost always a bad idea in air disasters, and at this stage it is foolish to place blame, but the available evidence indicates the crew tried to depart on the wrong runway -- a classic and blatant case of human error.

At 3,500 feet, Runway 26 at Lexington's Blue Grass Airport -- it's a shame for a deadly accident to befall an airport with such an anachronistically sweet name -- is used primarily by general aviation craft (smaller private planes), and under most conditions is too short for a plane the size of a 50-seat regional jet. Runway 22, twice as long, would have been the intended strip. The numbers refer to magnetic orientation. Add a zero, and Runway 22 is aimed 220 degrees, or southwesterly. Runway 26 points 260 degrees, or just shy of due west.

For the record, no airplane has a fixed distance as to how much room is required to reach takeoff speed. Paul Czysz, professor emeritus of aerospace at St. Louis University, was wrong to tell the Associated Press that a Bombardier CRJ200 "needs" 5,500 feet. Every departure is different, with required length depending on weight, weather and other variables. A plane must have at least enough pavement to accelerate to a point just shy of liftoff speed, to a velocity pilots call V-1, then stop safely if the roll is discontinued, and this data is calculated and verified prior to departure. But regardless of whether Runway 26 could technically accommodate their jet (obviously it couldn't), the crew of Flight 5191 was not supposed to be on that runway to begin with. So how did they get there?

The idea of two hapless pilots departing down the incorrect strip might seem ridiculously inexcusable, and frankly it is. Neither is it easy. You would not be penalized for asking aloud, with a shake of the head and a tone of rhetorical amazement: "How in the world could they take off on the wrong damn runway?" Plenty of professional pilots are asking the same thing.

From the time a plane leaves the gate to the moment when the thrust levers are advanced for takeoff, ample checks and balances are in place to ensure such an error won't be made. There are cockpit instruments, compasses, charts and computerized navigational units that show the plane's precise orientation -- to say nothing of basic situational awareness, something pilots pride themselves on. In a final check, on the runway itself, it's standard procedure to cross-check a plane's direction against the directional gyro and/or compass displays. At LEX, the intended runway and the crash runway are 40 degrees of alignment apart. That's a sizable difference, unlike the parallel strips found at some airports -- and even those are difficult to confuse. For good measure, one aviation resource site describes Runway 26's surface as: "asphalt/concrete, in poor condition. CONCRETE IS SEVERELY CRACKED."

But while it's easy to make the crew look foolish, at the same time, any pilot can imagine a certain scenario: It's an early morning departure. The sky is dark and foggy. Out on the taxiway, you're hurrying to complete a last-minute checklist, programming a nav computer or studying the radar display while the captain taxis to the runway, himself tired and busy with final preparations. The controllers are anxious to get you moving because there's another jet on final behind you An errant takeoff is, and I can't emphasize this enough, extremely unlikely. But if it's going to happen at all, circumstances like those are liable to be present. On a stormy night six years ago in Taiwan, a Singapore Airlines 747-400 departed on a closed runway cluttered with construction equipment. The ensuing crash -- the only blemish in the carrier's history -- killed 83 people. In 1983, after becoming disoriented in fog, a Korean Air Lines DC-10 collided with a small Piper aircraft at Anchorage, Alaska, while trying to take off on an incorrect runway.

Presumably the pilots of 5191 realized their mistake, but too late. Once the jet had accelerated beyond a certain point, there were two options, neither particularly inviting: The first was to immediately discontinue the roll and attempt to stop using maximum braking, reverse thrust and wing spoilers. With only 3,500 feet to start with, a high-speed overrun was nonetheless inevitable and potentially very dangerous. The second option would be to continue accelerating and hope to get safely airborne before running out of room or hitting something. Which they chose isn't yet known, and their decision would have been made based on how far they had traveled, and how fast they were going. It'll be interesting to learn how close the jet was to its predetermined V-1 speed, also known as "takeoff decision speed," at the point when it reached the threshold. It's also possible, if not likely, that engine trouble or other mechanical issues came into play.

A flurry of questions and concerns regarding regional jets themselves have emerged. Are smaller aircraft less safe than larger ones? How sophisticated are they? Are regional airline crews, notoriously underpaid and often quite young, trained to adequate standards? Are the financial troubles of Comair somehow implicated? They answers, respectively, are no, plenty, yes, and doubtful.

In short, regional planes are reliable, multimillion-dollar machines that are, generally speaking, no less advanced than larger jets, and often more so. The crews are qualified and highly skilled.

If, on some level, regional flying is "less safe" than mainline flying -- an academic distinction if ever there was one -- crew fatigue might be something to look at. Having been employed as a captain and first officer at regional carriers for the better part of seven years, I'll attest to the brutality of scheduling: short layovers with no access to food followed by multi-leg days of high-workload flying. Media reports claim the crew of 5191 may have had as little as eight hours break between duty periods, with an early morning check-in just prior to the incident. Tiredness is no excuse for what apparently happened, but I wouldn't be shocked if, months from now when the National Traffic Safety Board completes its dossier, fatigue is listed as a contributing cause.

You will hear too about emergency egress standards, since it appears the crash itself was survivable, with the victims probably succumbing to smoke and fire, not impact forces. In some ways the tragedy is the opposite of what happened in Toronto in August 2005. Although the Air France Airbus A340 skidded off a runway and burned, all occupants escaped. You will hear too about calls for better runway signage, and more gadgets and gizmos to keep this sort of thing from happening in the future. Some of the recommendations will be constructive and conceivably useful, but the truth is, there is no magic cure-all. People occasionally screw up and will continue to do so, and you can't engineer out every possible opportunity for error. The rarity of wrong-runway catastrophes ought to remind you that this isn't a crisis or chronic problem.

If you're a naturally squeamish traveler, it's tempting to interpret the Lexington debacle as a horrible and frightening reminder of the inherent dangers of flying. You'll be biting your nails and girding for the worst at every takeoff from now on. Try not to do that. Try to instead remember that we had gone almost five full years without suffering a serious aviation accident in North America. While not to disparage or downplay the deaths of four dozen people, we still haven't suffered a truly large-scale catastrophe since that of American Airlines Flight 587 in November 2001. To put the streak in context: 25,000 commercial flights, give or take a few, depart each day in this country carrying nearly 3 million people.

It's poor solace for those aboard Flight 5191, but in a way their deaths help to underscore the rarity of crashes in the first place, and our remarkable successes at thwarting them.