An interview with the two political pranksters who pretended to be HUD officials -- and fooled Mayor Nagin, Gov. Blanco and a crowd of contractors in New Orleans. 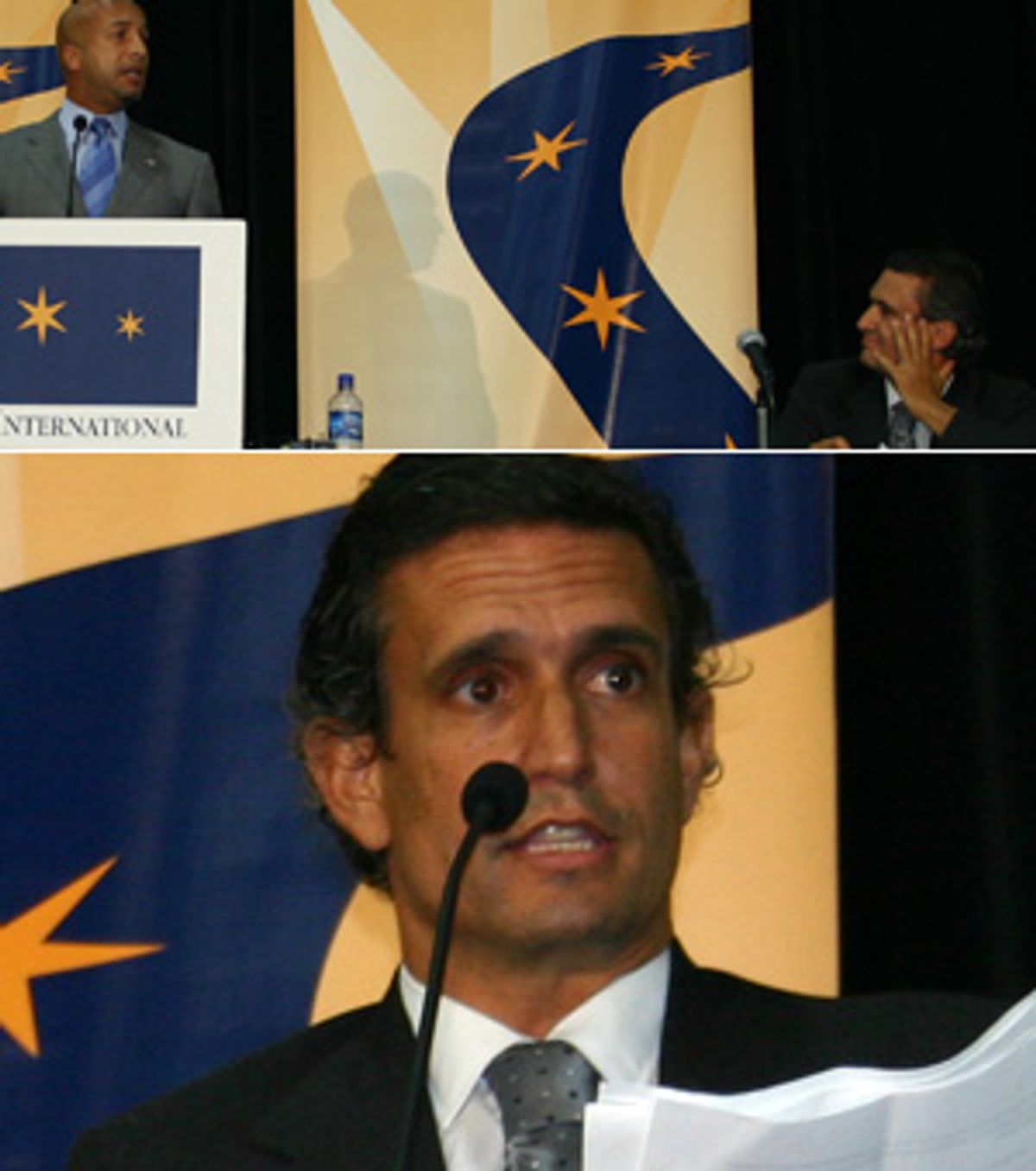 Rene Oswin, deputy assistant secretary of the Department of Housing and Urban Development, looked bemused, even a little shocked, to be onstage at Monday's Gulf Coast Reconstruction and Hurricane Preparedness Summit, where he was announcing a major change in HUD's policies. Namely, he announced that he was reversing the planned destruction of thousands of units of public housing and allowing the one-time residents to move back in.

Of course, Oswin had good reason to be shocked  he was, in fact, not an employee of HUD, but one of the Yes Men, a "culture jamming" group of two activists, Andy Bichlbaum and Mike Bonanno (not their real names; in fact, only the latest in a series of aliases), already notorious for stunts such as a mock Web site for George W. Bush's 2000 presidential campaign, which inspired the then-candidate to declare that "there ought to be limits to freedom," and a movie documenting their exploits. It's not all fun and games, says Bilchbaum, who played Oswin. The Yes Men had a serious message about HUD, one that was surprisingly well received by the contractors present at the summit.

Are you guys at all nervous when you do these things?

Bonanno: Yeah, very nervous -- extremely nervous -- definitely. One of the things that we didn't know was that on the podium, along with Andy, were going to be the governor and the mayor. That was very nerve-wracking, to have to deal with shaking hands with [Mayor] Ray Nagin, with the governor of Louisiana. So yeah, it makes you really nervous, because you've got to wonder what's going to happen.

So tell me about what you did yesterday.

Bichlbaum: We were at the Convention Center where they were having this big conference, and we'd been communicating with [summit organizers] about how Alphonso Jackson, the secretary of HUD, was going to arrive to give a speech. And perhaps as a consequence, Ray Nagin, the mayor of New Orleans, and Governor [Kathleen] Blanco were there, perhaps to meet Jackson and discuss their mutual plans for the city. Instead, of course, I showed up, as the deputy assistant secretary to Jackson. Blanco gave a speech, Nagin went up and gave a speech about the city, and about how truth always wins over lies, and then I spoke. I was surprised to be able to finish my speech -- actually, I was surprised to even be able to begin it, and then to finish it. People in the audience were very enthusiastic about all of the proposals. There was spontaneous applause at about three parts of the speech. People were just overwhelmed with joy at the proposals.

Afterwards, a couple reporters, who had done their homework a little bit, figured it out and confronted me. I kind of put them off for a little bit: I told one of them that HUD had basically ejected from the organization those who had a more reasonable view of things. That didn't really work, of course. They just kept at it, to their credit, and I had to admit it. But the contractors were still very excited about the whole thing. It was a bit strange -- at one point, there was a reporter on one side, saying, "This was a hoax, right? This was a hoax!" and on the other side was a contractor saying, "So I can't wait to show you some of our new housing stuff. We have this technology to do all these things" That was a pretty surreal experience.

You're telling the contractors you're not going to be knocking down buildings and there won't be any contracts to bid on. Why would they be enthusiastic about that?

Bonanno: The people at the conference are of course human, and if you tell humans -- almost all humans, except the most despicable ones -- that there are people who are locked out of their homes and you've decided to let them back in their homes, they'll be happy.

How did Nagin and Blanco respond?

Bichlbaum: They were off the stage at that point. I guess because I wasn't Jackson they weren't that interested in sticking around and talking to me, although they did both thank me publicly from the lectern during their speeches.

Apparently Kathleen Blanco stayed at the back for a little bit. When she found out it was a hoax, she was very appalled and had all the language to express that. I'm getting this secondhand, so I don't know exactly what she said, but apparently she was very upset, as was HUD, of course.

Why did you decide to do this?

Bichlbaum: We wanted to call attention to this situation in New Orleans, which is emblematic of a much bigger issue, of the way that HUD is treating the people that they're supposed to be watching out for. Their policy, systematically across the country and especially in New Orleans right now, is to tear down public housing and replace it with so-called mixed-income flats. They take funding away from services, like education and healthcare. There's another way to do it. We think they're going about it the wrong way, and we wanted to call attention to that issue.

It's preposterous, when you look at the situation here in New Orleans. There's thousands of working-class families who want to get back into their houses. The city needs workers. And these places aren't even damaged. Everybody thinks they're damaged, because HUD has repeated, a million times, that they're damaged, but you visit them and they're not. They're clearly not damaged. The water didn't even get to the part where it could damage them. They were built 3 feet off the ground, with the understanding that there could be a flood. We brought contractors to one of these places, Lafitte housing projects, and they said, "Yeah, just take the locks off the doors." Clearly, it's a land grab. What's happening is this is valuable real estate, and they have a master plan for New Orleans, the mayor, the governor and business interests. The planning is being done by a private foundation, largely funded by corporate money, and this is what they want. They want to take over this land. To put it bluntly, all they want is to get poor people out of there, so they're not a blot on the city anymore. As long as they're not there, well, they'd like them to have good lives, but it's someone else's business, really. The real way to make sure that they have good lives is to give them what they need upfront, and that's what we presented to the contractors.

Do you think people will be offended?

Bichlbaum: Not really, no. In our experience, at least the people that we've talked to on the ground, in these communities, they're not offended by it. They were extremely excited about it, they thought it was a great thing. I hear people saying, "You've raised false hope, you're making them think they're finally getting something from the government which has mistreated them for so many years," well, yeah there's a chance.

However, we spoke to people in that community, people from the Lafitte housing projects who want to get back in, and they said, "We've been so disappointed, for so many years, you don't have to worry about hurting our feelings. Do whatever's most effective, do it, don't worry about how it affects us. If it draws attention to this, we can handle it. That's all we want, and if there's a few hurt feelings, we can handle it. We have hit rock bottom, we've been so mortally disappointed for so long, we can handle anything." We spoke to this man the day before, we spoke to others, and they had the same message, so we said, "Okay, we'll do it." And we had the reaction we expected. We don't actually care if anybody else is offended. That's fine with us, as long as they're not.

What effect do you hope to have?

Bichlbaum: Well, we hope to shame HUD. We hope to shame HUD, and the city, into listening to what people really want, and what people want is to get back into their homes. What the city should want is to get people back into their homes. You think about the issue for a moment and you realize this is what should happen. It would be good for everybody. And we hope that what we did can penetrate the people that are talking about it in a different way. That's the whole goal.

That's the ideal result -- having had experience doing this, what do you think actually will happen?

Bichlbaum: I don't know. In this case, you have a situation that's on the brink. We've never really had this, a situation that's on the brink of changing. Everything could change. If pressure is put on HUD, they could change their policy. There's nothing set in stone about it; it's like a house of cards, and all you have to do is poke it, show what's actually there, and it will all fall down, at least that's what we hope. But we don't know, because we've never been in a situation like this, where everything could just change suddenly. The real effect of what we've done in the past is to get a little more attention for topics that are already being fought over. In this case we hope that happens -- I mean, it has happened -- but we also hope that eventually people are outraged enough to force a change in HUD's policies. They already are outraged, but not enough people know what's going on, even in New Orleans. I mean, just look at the random contractors who came. They were outraged that HUD was going to tear these things down. All you have to do is show this to people, and they're outraged. If enough people are outraged, HUD won't be able to do it.

Is there any fear of legal repercussions for what you do?

Bonanno: Well, not exactly. We've been concerned about it at different times, but we've made sure not to find out whether it's legal. (Laughs.) Nobody really knows whether what we do is legal or illegal, and we think it couldn't be, because it's ethically appropriate. It's perhaps the best thing that we could possibly do as far as the ethics goes. The legality, a lot of that depends on whether these people press charges, and so far nobody has.