A tale of two presidents?

In yet another effort to sell the war in Iraq, the White House wants you to remember the man with the bullhorn. 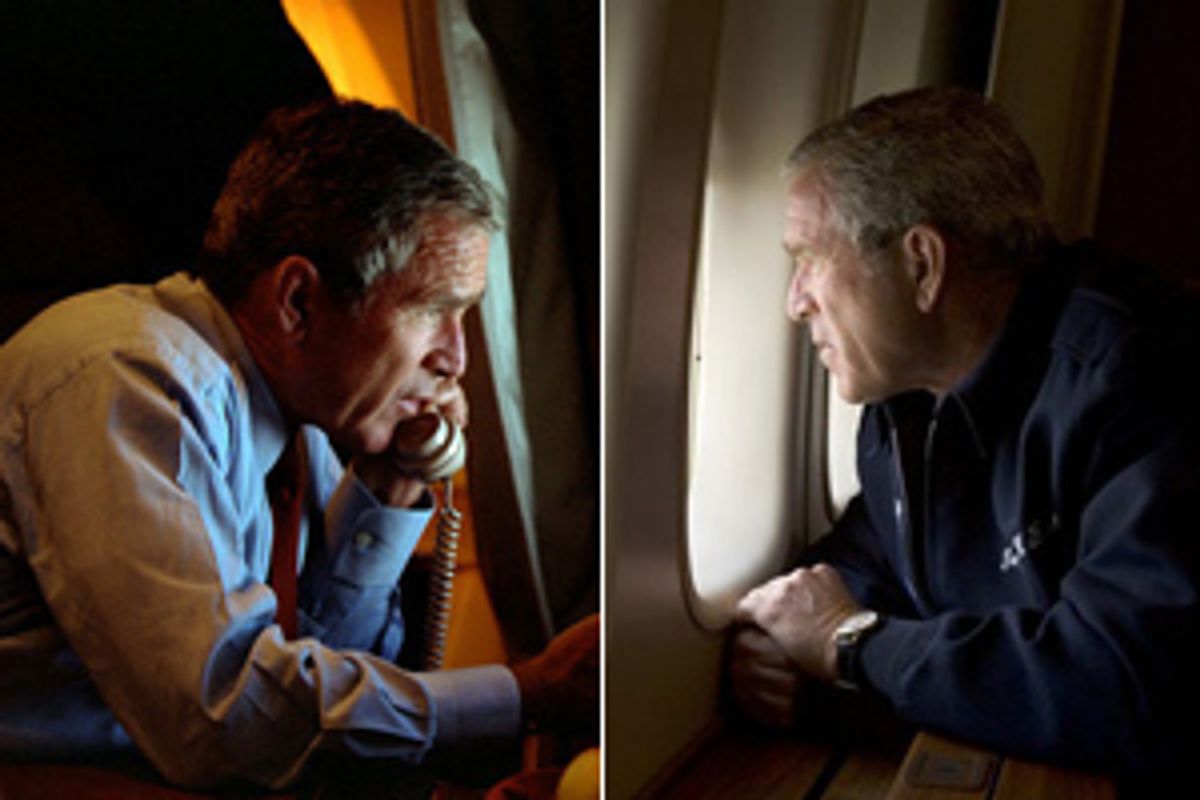 "Terrorism is on the minds of Americans, and as we go into the fifth anniversary of the Sept. 11 attacks, it's appropriate and necessary that the nation continue to hear about the state of the war and the nature of our enemy."

So says a senior administration official as he describes George W. Bush's hope to bolster support for the war in Iraq with a series of speeches timed to coincide with next month's 9/11 anniversary.

As the Wall Street Journal notes, there's been something of an evolution in the president's rhetorical approach to the war. While earlier rounds of speeches tended to focus on claims of progress in Iraq, Bush will speak more this time about the "high stakes and changing nature of the battle." That's an inevitable result of the facts on the ground, both there and here. There isn't a lot of good news to report from Iraq these days -- a roadside bomb killed at least 24 people in Baghdad today -- and Americans aren't buying happy talk about the war anymore: Sixty-two percent of the public says that things are going badly for the United States in Iraq.

But there's a second sort of rhetorical evolution going on here, too. The public no longer sees the war in Iraq as part of the war on terror, let alone as its "central front," and even the president has now conceded that Iraq had "nothing" to do with 9/11. That won't stop the White House from wrapping the war in memories of 9/11 -- see the words at the top of this post, or Donald Rumsfeld's speech yesterday, or Dick Cheney's speech the day before that -- but it does seem that the approach is changing a bit: The war isn't right just because we're striking back against the enemy who attacked us (even if we're not); the war is right because it's being brought to you by the man you liked so much in the days after those attacks occurred.

They're painting pictures now of scenes they want you to remember. Listen to Rumsfeld yesterday at the American Legion convention: Bush "remains the same man who stood atop the rubble of lower Manhattan, with a bullhorn, vowing to fight back." Check out Cheney yesterday in Nebraska: "To stand here at Offutt Air Force Base is to be reminded of how the world changed on that terrible morning. This is where President Bush came to direct the initial response to the attacks, and to conduct an emergency national security meeting by secure video."

OK, so we're not really expecting the president to mark 9/11 with a commemorative reading of "The Pet Goat." But amid all of the media discussion comparing the beloved and decisive 9/11 Bush with the reviled and detached Katrina Bush, hasn't anyone noticed that the same guy was on duty both times? Yeah, Bush looked better with the bullhorn and the rubble than he did in the bizarre blue light of Jackson Square, but it took him a while to get to either place. And once he was there? The results, practically and politically speaking, have been pretty much the same. Afghanistan and Iraq are in chaos, and bin Laden is still on the loose. New Orleans is a mess, and the president seemed to acknowledge this week that the "quick" recovery he promised could take a decade to complete -- if it ever happens at all.

Bush may have peaked in popularity after 9/11, and Katrina may have added to his steady slide in the polls. But in the midst of these dual anniversaries, more Americans approve of Bush's handling of the hurricane than they do of his handling of Iraq, his signature response to the attacks of 9/11. A majority of Americans disapprove of both.

Maybe America is full of "appeasers" and "self-defeating" pessimists, as Rumsfeld and Cheney have been arguing this week. But we'd like to think that it's going to take more than marginalizing the majority for the Republicans to hold onto control of the House and Senate this fall. That's why the White House and the Republican National Committee hope that as you head to the polls in November, you'll forget about the president who led his country into a phony and failed war and fiddled while a great American city drowned. They want you to remember the president you saw just after the United States was attacked and just before he actually did anything about it. There was glory in that moment, and the GOP wants it back.