Why "booty popping" will do to Islamic fundamentalism what rock 'n' roll did to Stalinism. 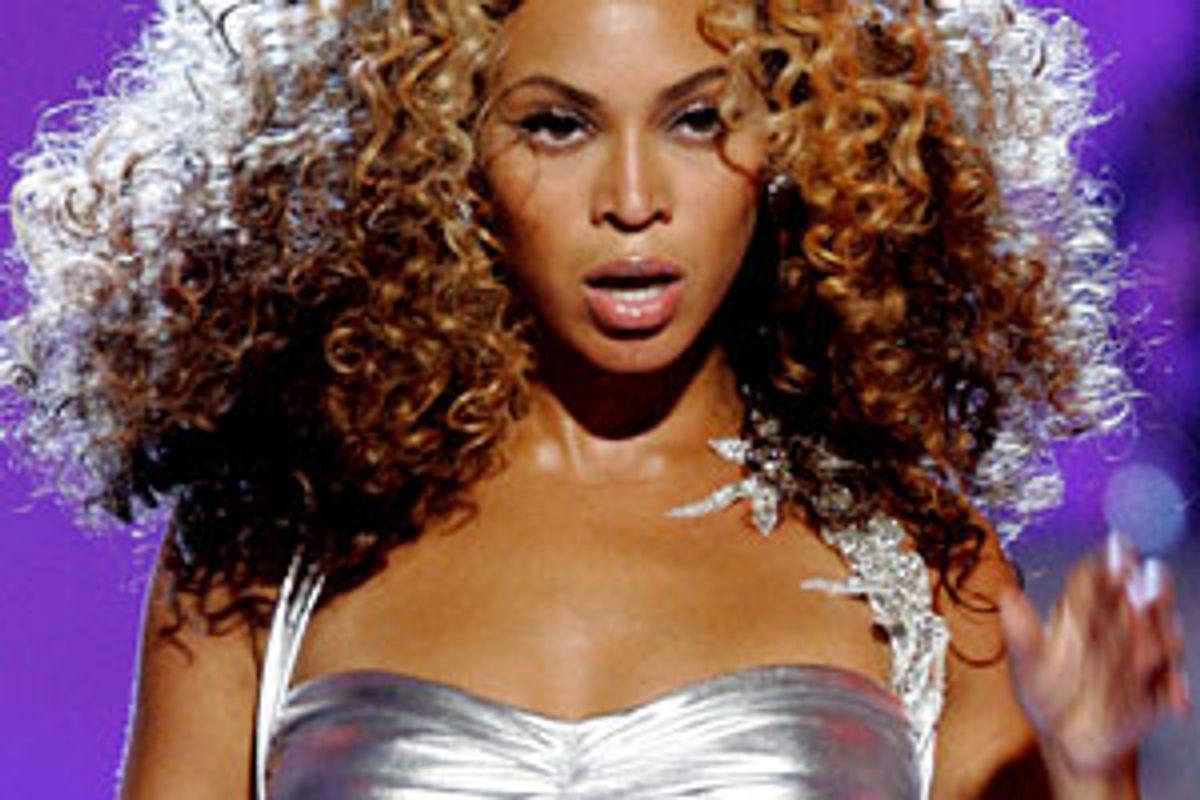 Soviet soldiers returning home from the western front after World War II brought the virus with them. Within a few years, it had infected large portions of the Soviet and Soviet bloc populations. By the late 1940s, the Communist Party leadership feared it would destroy the socialist fatherland from within. But it was not a biological disease that threatened communism. Joseph Stalin and his commissars called it an "amoral infection" in the minds of Soviet youth. It was "American primitivism," "capitalist cultural imperialism" and "bourgeois cosmopolitanism." But it was really African-American culture. It was the same infection that today is spreading underneath the police, the laws and the censors of Islamic regimes.

This month, Beyoncé and Jay-Z's "Déjà vu" is No. 1 on the top 40 of the biggest Muslim nation in the world, Indonesia. Nine of the top 10 songs on the United Arab Emirates singles chart are hip-hop or R&B. Earlier this year Egyptian rappers MTM -- whose hit song "Ummi Musafra" ("My Mother's Away") is about a teenager who holds a dance party while his mother is away on holiday -- were voted best modern Arab act at the first Arabian Music Awards. Several journalists have reported on the vast Iranian black market in Western music and movies of all sorts. And everyone seems to agree that youth in Iran are engaged in widespread rebellion against Islamic sharia law. Tattoos, sneakers, platform shoes, belly rings, and public displays of affection are ubiquitous in the most militantly Islamic republic.

Muslim leaders are -- rightly -- up in arms over all this. Even the relatively liberal cable channel Al-Jazeera has run several denunciations of rap in particular and of Western cultural penetration in general. Iranian authorities have removed hundreds of illicit satellite dishes that constantly reappear. Earlier this year, President Mahmoud Ahmadinejad banned Western music and the "social corruption" it caused, but was recently forced to call off his crackdown. Meanwhile, according to a memoir just published by Osama bin Laden's former paramour, the al-Qaida leader might have lusted after Whitney Houston, but he considered her music to be the work of the devil.

It's all very familiar. In 1946, soon after Stalin's chief aide warned that jazz would "poison the consciousness of the masses," the Central Committee of the Communist Party ordered all state orchestras to stop playing the music. Also banned were saxophones, wah-wah trumpet mutes, the plucking of bass strings, the deliberate lowering of tones to create "blue notes," and the playing of drums with too much rhythm. Brigades of music patrols monitored theaters and dance halls to ensure that nothing jazzy was being played. Couples caught dancing anything other than the waltz, the polka, or Russian folk dances were subject to arrest. Members of jazz bands were rounded up and sent to Siberian prisons.

Soviet authorities were right to fear jazz, but they could not stop it. Bootleg recordings were sold by the millions on the black market. Stiliagi, or "style hunters," appeared on the streets of all the major cities in the Soviet bloc, wearing zoot suits and ducktails if they were male or tight dresses and bouffant hairdos if they were female. They refused to work and loved to drink, "hang out" and listen to black music. Swing and boogie-woogie were early favorites, then bebop and rhythm and blues.

Unfortunately for the Communist leadership, the emergence of jazz fans in the Soviet bloc was only the beginning of a process that ended in 1991. The historian Julia Hessler has written that, "in a real sense, the stiliagi heralded the advent of an individualistic, self-expressive approach to consumption characteristic of the consumer societies of the postwar West." Not only did this "vulgar" and "decadent" culture continue to spread, but as the '50s ended it mutated into something even worse -- rock 'n' roll.

The introduction of reel-to-reel tape recorders in the 1960s helped create a vast underground culture of fans of rock, rhythm and blues, and later disco and hip-hop. In 1968 the newspaper Sovetskaia Rossia warned: "The epidemic of bawdy and vulgar songs copied from tape recorders is spreading faster than a flu virus." By far the biggest dance during the Khrushchev era was the twist, which had been introduced in the United States by the black rocker Chubby Checker. In Czechoslovakia alone, there were an estimated 200 "twist ensembles" that performed the dance in underground theaters. Increasingly, however, Soviet bloc youth listened to native musicians who made the music their own.

Though they avoided the explicit racism of their capitalist rivals, Communist authorities clearly understood the source of the corruption. A Bulgarian newspaper called young rockers "arrogant monkeys, dropped into our midst as if from a foreign zoo." Soviet cultural magazines referred to jazz and rock as "mud music" produced by an "ape culture." East German Communists more frankly dismissed it as "Negermusik." But the youth in those countries apparently took the association with African-Americans as a compliment. The first rock band in Poland, formed in 1958, was originally named Rhythm and Blues and subsequently changed its name to the Reds and Blacks.

By the 1970s, desire for music frequently turned to hatred for the USSR. Riots broke out at several rock concerts, where the targets were usually authorities who attempted to stop the performances. Then disco swept the Soviet bloc, soon after it was created in black gay New York City nightclubs. It was particularly popular in the Baltic republics, where dance clubs were the sites of several uprisings against the police. A Latvian newspaper called the country's 300 discos the "incubators of violence."

The Kremlin was forced to acknowledge that popular music could no longer be contained. Instead, as one historian has put it, it became "the soundtrack of glasnost." In the 1980s, performance spaces were opened with official approval from Moscow and Leningrad, the censorship of recordings was eased, giant rock concerts were staged all over Eastern Europe, and by the end of the decade major American and British pop acts were allowed to perform behind the iron curtain. Polls of Soviet youth showed that they had far greater knowledge of rock stars than of Marx, Lenin or Stalin. When the Berlin Wall came down in 1989, East Germans flooded West Berlin record shops.

Something quite similar is happening in the Muslim world, where the proliferation of satellite television and online music has had much the same effect that tape recorders had in the Soviet bloc.

In January of this year, Billboard reported on the enormous popularity of American hip-hop in the "under-the-radar market" of the United Arab Emirates. The Black Eyed Peas, 50 Cent, Mariah Carey, Destiny's Child, Alicia Keys and Sean Paul have all performed there, and a recent concert by Missy Elliott and Busta Rhymes in Dubai drew 10,000 fans. A music promoter in the UAE told Billboard that "the young adult population in Dubai has shown a significant growing appreciation for American R&B and hip-hop music."

Most dangerously, Middle Eastern fans of American music fuse it with their own cultures. Ruby, the biggest pop star in Egypt, sings with traditional Arabic intonations and belly dances, but clearly has taken a page or two from R&B divas. Her music is rooted in a disco-funk beat and in videos she wears tight, hip-riding jeans that were brought back into fashion by black and Latina women in the United States. Soon after her first video aired in 2003, Hamdi Hassan of the Muslim Brotherhood complained to Egypt's parliament that Ruby's performance "went against the morals of Muslim society." She was subsequently banned from an Arab music television channel and from holding concerts in Kuwait. But perhaps the single most important fact about contemporary Middle East politics is that according to a study conducted by the pan-Arab newspaper Al-Hayat, Ruby is more popular than any political or religious figure in Egypt. Even worse for the future of Islamism, a Cairo newspaper survey showed that, by a wide margin, Egyptian youth considered Ruby to be "the most interesting person in Egypt."

Islamism is facing an even graver challenge in Indonesia, with a special assist from Beyoncé Knowles. In 2003, a 24-year-old singer from East Java named Inul Daratista unleashed a sexual revolution simply by rotating her lower body onstage in such a way as to cause millions of men to worship her and millions of women to emulate her. Inul's dance style, which she calls "drilling," is indistinguishable from a move that has been ubiquitous in hip-hop clubs and videos for years, and which Beyoncé recently brought to the mainstream, called "booty popping." Islamic authorities in several Indonesian provinces have banned the dance, Muslim clerics have called for a national boycott of Inul's performances and pray for rain to keep fans away from her shows. She is also frequently cited as a reason to pass the hotly debated national anti-pornography bill. Nonetheless, Inul regularly draws audiences of more than 10,000, and millions of pirated VCDs of her performances have been sold in Indonesia. The singer-dancer, whose name means "the girl with breasts," dresses much like her pop counterparts in the Middle East, but she also has diamonds embedded in her teeth, a fashion statement made famous by American rappers.

And who is the most popular singer in Iraq? "That's easy," said ABC Baghdad correspondent John Berman in a "Nightline" segment. "Lionel Richie." "Grown Iraqi men get misty-eyed by the mere mention of his name. 'I love Lionel Richie,' they say. Iraqis who do not understand a word of English can sing an entire Lionel Richie song." Asked to explain this phenomenon, Richie, who has performed in Morocco, Dubai, Qatar, and Libya, could not: "The answer is, I'm huge, huge in the Arab world. The answer as to why is, I don't have the slightest idea."

Why, then, does black music get so little praise from the would-be evangelists of democracy? If African-American music helped bring down the Soviet Union and is a mortal enemy of Islamic fundamentalism, why has it not been promoted by American political leaders as a beacon of freedom? The answer might be that, by necessity, leaders of all political varieties share a devotion to social order. This may explain why no less a liberal than Franklin Roosevelt banned jazz in concerts sponsored by his Works Progress Administration, or why rock 'n' roll was denounced by both Democrats and Republicans for causing juvenile delinquency in the 1950s. It could help us understand why civil rights leaders such as W.E.B. DuBois, Martin Luther King Jr., and Al Sharpton, who have all sought a share of responsibility for the nation, have collectively attacked every form of black popular music from jazz to rap, or why Tipper Gore and Susan Baker, the wife of Ronald Reagan's treasury secretary James Baker, could find common cause as co-chairs of the Parents Music Resource Center, which called for censoring rap, R&B and rock lyrics.

Of course, the form of black pop music currently ascendant, hip-hop, is attacked by American political figures across the spectrum for promoting sex, consumerism and "irresponsibility." Ironically, these critics sound very much like their enemies in Tehran. Naturally, the Bush administration has nothing good to say about hip-hop, and American liberals are generally "disappointed" when Arabs are more interested in vulgar pop songs than in democracy. But if we are serious about promoting freedom -- here or in the Middle East -- there may be no better way than to promote Beyoncé.

Thaddeus Russell is a visiting professor of history and political science at the New School for Social Research and author of the forthcoming "The Color of Freedom: Race and Citizenship in the Civil Rights Era."